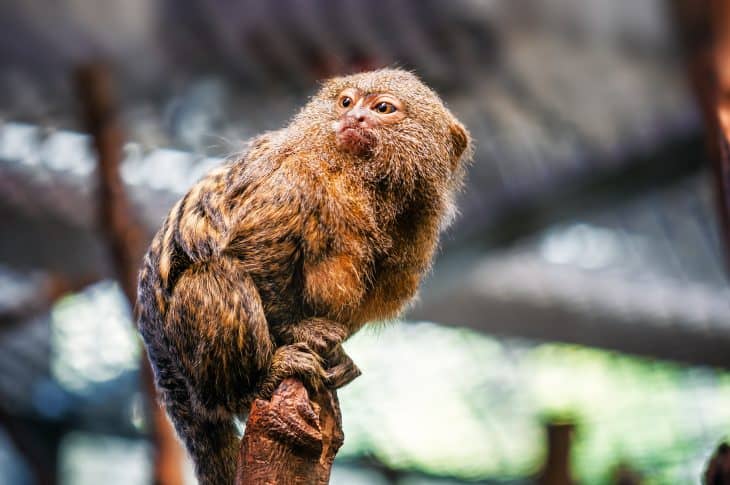 It’s no secret that miniature things are adorable; tiny animals, even more so. The pygmy marmoset, which we affectionately call the finger monkey, is the smallest monkey in the world. Native to the rainforests of the Amazon region, even the adults of these adorable monkeys can fit in the palm of your hand. Read more about these adorably small animals with these fascinating finger monkey facts.

Quick Facts
Essential Facts
Interesting Facts
Table of Contents
01 There are two species of finger monkey.
02 Pygmy marmosets are not the smallest primates in the world.
03 They have claws and do not have opposable thumbs.
04 The diet of the finger monkey mostly consists of tree gum.
05 Finger monkeys are highly social animals.
06 They are mostly monogamous.
07 Much like human babies, finger monkey babies babble to hone their language skills.
08 Pygmy marmosets help raise their siblings.
09 They can leap 15 feet into the air.
10 Some people keep them as exotic pets.

There are two species of finger monkey.

Pygmy marmosets or finger monkeys have two extant species: the Western pygmy marmoset (Cebuella pygmaea) and the Eastern pygmy marmoset (Cebuella niveiventris). The two species have a few differences in color and morphology. They also differ in their geographic range. They live in the Amazon region of northern Bolivia, Brazil, Colombia, Ecuador, and Peru, and the two species are separated in range by rivers in Central and South America.

Some classify them under the genus Callithrix, along with their close relatives, the marmosets and tamarins. Most scientists now contend that they are distinct enough to belong in their own genus, Cebuella. The two species have been evolving separately for around 3 million years.

Pygmy marmosets are not the smallest primates in the world.

Growing up to sizes of 4.6 to 6.0 inches (11.7 to 15.2 cm) from head to body, these finger monkeys are truly lilliputian. The newborns are especially adorable and are just about as big as a human thumb.

Although they are the world’s smallest monkeys, finger monkeys are not the smallest primates. The smallest primates are the critically endangered Madame Berthe’s mouse lemurs (Microcebus berthae), which have an average size of 3.6 in (9.2 cm) from head to body.

They have claws and do not have opposable thumbs.

Pygmy marmosets are rather odd primates and have many anatomical differences from most other monkeys. Most monkeys have flat fingernails, but pygmy marmosets have claws or tegulae on most of their digits. The only exception would be their big toes, which have flat nails or ungulae. These claws allow them to get a better grip on the barks of trees and enable them to easily move up and down trees.

The unique anatomical features of pygmy marmosets better adapt them to their arboreal lifestyles, even though their tails aren’t prehensile. The squirrel-like tails, however, could be used to allow them to balance themselves. Finger monkeys also lack the opposable thumbs that other monkeys have. Furthermore, they don’t seem to have the same elaborate facial expressions as other monkeys.

The diet of the finger monkey mostly consists of tree gum.

As omnivorous animals, finger monkeys can eat a variety of food. However, their favorite food is tree gum, resin, sap, and other fluids that trees secrete. Because of their habit of eating tree gum and other exudates, some scientists deem it apt to classify them as “gummivores” or “exudativores”. They rely mostly on tree exudates because of their small home ranges; they cannot rely solely on fruits alone in their areas and therefore evolved to derive food from other means.

Finger monkeys are gum-eating specialists, and they’ve evolved various adaptations to feed on gum. Their lower teeth are sharp and allow them to drill nearly-perfect circular holes into the barks of trees. Their digestive tracts also are specialized to digest gum. Aside from tree secretions, pygmy marmosets also eat insects, small lizards, spiders, flowers, and fruits.

Like many other monkeys, the finger monkey is a social animal. Pygmy marmosets live in groups of 2 to 6 individuals, typically made up of an adult pair living with their offspring. A group of finger monkeys is called a troop.

Finger monkeys bond through grooming each other and sleep together in places close to where they eat. They mostly engage in social activities after waking up and in the late afternoon before they return to their sleeping areas.

Pygmy marmosets have complex vocalizations, and a finger monkey call can sound like a bird call. When communicating through long distances, as in locating other finger monkeys, they tend to use lower frequencies because these frequencies aren’t as easily disturbed by the environment and can therefore reach a wider area. Their vocalizations can also reach to the ultrasonic spectrum, which humans can’t hear. Pygmy marmosets can also alter their calls depending on their social environment—imitating the calls of their group members and making new calls when they have a new mate.

Aside from their vocalizations, pygmy marmosets can also communicate with each other through visual cues and scent marks.

The finger monkey is typically monogamous, with dominant males showing aggression to other males that may attempt to mate with the female. However, in groups with multiple males, the females may exhibit polyandry, or having multiple male mates at a time. Because males are the ones who carry the young pygmy marmosets on their backs, polyandry could be helpful in reducing the efforts of the individual males. Due to their limited habitat range, however, polyandry is quite rare.

Female pygmy marmosets don’t show outward signs of ovulation, such as sexual swelling. Instead, they let males know when they’re ready to mate via their scent.

Much like human babies, finger monkey babies babble to hone their language skills.

In pygmy marmoset groups, vocalizations are important tools for communication, and they learn vocal skills early in their development. One of the most interesting finger monkey facts is that pygmy marmoset babies babble to hone these communication skills, similar to how human babies learn how to talk.

Both of the finger monkey parents participate in raising the infants. Interestingly, the older siblings also help in taking care of the younger pygmy marmosets. The parents teach important parenting skills to their children, and they also benefit from the reduced effort needed to care for the young. Around five individuals can participate in taking care of an infant, and they’re in charge of foraging for food and watching out for potential predators. Some members of the group may even delay their own reproduction to better take care of an infant in the group.

They can leap 15 feet into the air.

Pygmy marmosets live in rainforests and face the threat of many predators, such as birds of prey, snakes, and small wildcats. To better avoid their natural predators, they evolved coats of fur that provide them some form of camouflage. They also dash quite fast and can leap up to 15 feet (4.6 m) into the air to avoid approaching predators.

Some people keep them as exotic pets.

Finger monkeys are valued highly in the exotic pet trade because of their reputation as the smallest monkey in the world. They’re relatively rare to find in the market, however, even though both species are of least concern and are not endangered. In captivity, they can live for up to 20 years, in contrast to their wild counterparts who live much shorter. They only live up to 11-12 years on average in the wild because of the environmental dangers.

Having a finger monkey as a pet requires a lot of effort, especially because they thrive in conditions similar to where they live in the wild. Pygmy marmosets can eat fruits, insects, and small reptiles. It’s also important to remember that they are wild animals and can act in unpredictable ways. Some places may also deem it illegal to keep them as pets, and it’s important to consider local laws before getting a pet pygmy marmoset.