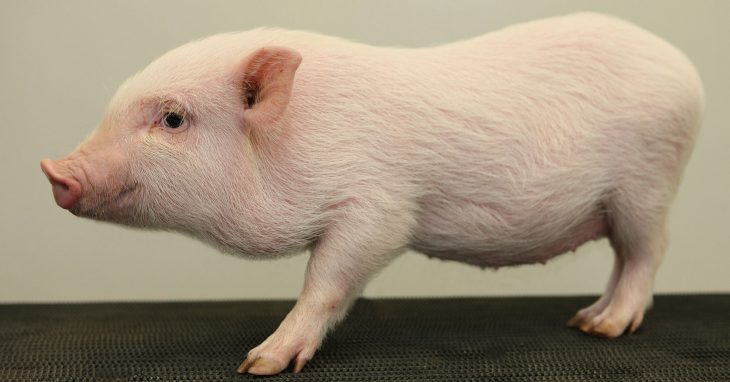 Teacup pigs look and sound like they’re cute, but you’d be surprised by the cruel truth behind them. While it may seem like a quirky pet option for most people, teacup pig breeding is a dark industry that exploits these poor creatures. Find out the real deal behind these animals with these teacup pig facts.

Quick Facts
Essential Facts
Interesting Facts
Table of Contents
01 Teacup pigs are very expensive.
02 Teacup pigs have a very short lifespan.
03 You can’t keep pigs as pets in some places.
04 Pigs in general are actually social animals.
05 Your teacup pig might not get along with your other pets.
06 Professionals advise owners of teacup pigs to have them neutered.
07 Professionals also advise owners of teacup pigs to give them regular exercise.
08 Teacup pigs can get really messy.
09 Abandoning a teacup pig that’s grown too big to handle is a bad idea.
10 Paris Hilton is a famous owner of a teacup pig.

One more reason you shouldn’t buy into what’s essentially a cruel scam is the price tag attached to these poor animals. The smallest price tag for a teacup pug comes to around $750, which can go even higher into $3500 at the most.

Even if you get a teacup pig for any price, you still have to put money into feeding them and providing them with proper healthcare, such as vaccines. Once you factor those in, you can expect to regularly spend thousands of dollars on your teacup every single year.

Normally, the potbellied pigs they descend from can live up to 18 years with a healthy lifestyle. However, depending on how their breeders made them, teapot pigs usually live only up to 5 years. This especially happens to teacup pigs born through inbreeding, as they tend to have genetic defects that result in bone and immune system problems.

You can’t keep pigs as pets in some places.

One factor that’s not usually noticed behind the abandonment of teacup pigs is actually shared with pet pigs in general. Some places in the USA and other countries have zoning laws that include restrictions on what kinds of animals you’re allowed to keep as pets. Many of these laws make it illegal to keep pigs as pets, more often than not forcing owners to literally throw their pets away.

They may not be as social as dogs, but pigs like to live together in groups. Even with a caring owner, a solitary pig will get lonely, which often results in negative behavior. At best, they’d get bored – but they can also become aggressive in extreme cases.

Your teacup pig might not get along with your other pets.

Generally, pigs are only social animals with fellow pigs.  When it comes to other animals, even professionals find it hard to predict what might happen. Sometimes, the animals adapt to each other’s presence, but sometimes, they don’t.

For example, a dog and a teacup pig might get along while the latter is still small, but once it gets bigger, the teacup pig tends to compete with the dog for food.

Professionals advise owners of teacup pigs to have them neutered.

This actually helps them adapt to and coexist with any other pets you might have. For most owners, neutering made their male teacup pigs less aggressive.

Professionals also advise owners of teacup pigs to give them regular exercise.

This applies to all pets in general, as regular exercise can keep them healthy and occupied. However, this is especially helpful for teacup pigs who usually suffer from bad health thanks to their origins. Not only would it make them healthier, but it might also actually help them live longer and bond with you better.

Teacup pigs can get really messy.

Not exclusive to teacup pigs, this is a trait shared with all pigs in general. While you can train a pig to make them less messy, you can’t really change a pig’s nature. They will always make a mess sooner or later, to a greater or lesser degree.

Abandoning a teacup pig that’s grown too big to handle is a bad idea.

For one thing, it’s cruel and inhumane, and while that’s bad by itself, it could also get you into trouble with the law for animal cruelty. And for another thing, if the abandoned teacup pig adapts to and survives in the wild for a time, it could result in complications.Specifically, they might meet and mate with wild pigs in your area, which could have unpredictable effects on your local ecology. In turn, this could also land you in trouble with the law for damaging the environment.

Paris Hilton is a famous owner of a teacup pig.