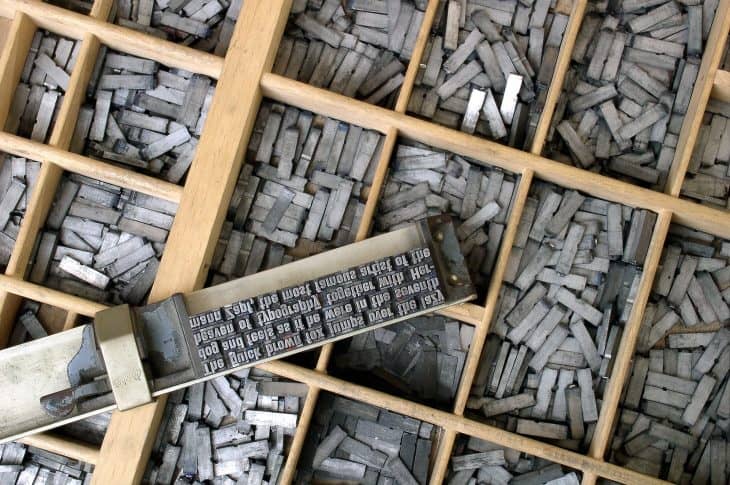 Fonts are the Myers-Briggs personality types of text. Whether you don’t care for them, or you’re the type to collect fonts for different purposes, we see them everyday. These fonts facts will help you lean more about the history, technicalities, and people behind iconic fonts.

Quick Facts
Essential Facts
Interesting Facts
Table of Contents
01 Steve Jobs made the earliest digital fonts.
02 Eric Gill designed Gill Sans - and was also into incest and bestiality.
03 Johannes Gutenburg printed the first Bible in the Textura font.
04 Fonts can affect people’s trust.
05 Even the creator of the Comic Sans font hates it.
06 The Declaration of Independence was printed in a British font.
07 The creator of the Doves font threw it into the Thames river to keep it from his business partner.
08 Helvetica is named after a place.
09 IKEA has only ever changed their font once.
10 Lower-case letters are better for road signs.
11 Obama used the Gotham font for his campaign.
12 Fancier fonts give a sense of expertise for certain professions.
13 Helvetica can help with dyslexia.
14 People associate some fonts with stability.
15 Some fonts give off assertiveness.
16 Creative fonts are best for fashion-related text.
17 There’s a font size for the optimal reading speed online.
18 Bodoni is the first modern typeface.
19 Avant Garde was the first font designed for a magazine.
20 Futura was the first font in space.

After Steve Jobs dropped out of Reed College to save his parents’ finances, he took classes in calligraphy. These calligraphy classes inspired him to offer different typefaces for his personal computer line, the Macintosh.

Eric Gill designed Gill Sans - and was also into incest and bestiality.

Aside from Gill Sans, Arthur Eric Rowton Gill also created 10 other fonts. Sounds like your typical type designer, but his personal diaries revealed his many unconventional sexual conquests.

Gill wrote about numerous extramarital affairs, incestuous relations with his two daughters and sisters, and even having sex with his dog. You wouldn’t expect that from a man of religion. Definitely one of the facts about fonts you didn’t expect.

Johannes Gutenburg printed the first Bible in the Textura font.

Johannes Gutenberg pioneered printing in Europe through his mechanical moving type printer. Among his greatest works was the Gutenberg Bible (or 42 line Bible), which was the first-ever mass-produced Bible in history. Gutenberg printed the Bible in the Textura font.

Different fonts communicate different messages to people. For example, a study showed that people are more likely to believe information written in Baskerville than Comic Sans. The type’s British sense of formality contributes to its credibility.

Even the creator of the Comic Sans font hates it.

Universally known as the world’s most hated font, Comic Sans was designed by Vincent Connare in 1995. Turns out, even Vincent Connare can’t take it seriously and only used it once for a complaint about his broadband service.

The Declaration of Independence was printed in a British font.

In 1776, Benjamin Franklin selected “Caslon” for the publishing of the American Declaration of Independence and the Constitution. It may seem like a minor detail, but Caslon is actually a British typeface – the nation that the 13 Colonies had to fight to reclaim independence in the first place.

The creator of the Doves font threw it into the Thames river to keep it from his business partner.

Fonts may just be something on a dropdown list for you, but it’s actually made people do crazy stuff. T. J. Cobden-Sanderson founded The Doves Press in 1900 with his business partner, Emery Walker.

They went on to create many standout types of the 20th century. However, their partnership came to an end in 1908. Part of the dissolution terms stated that Walker would get the rights of the types when Cobden-Sanderson died. To prevent this, Cobden-Sanderson hurled the matrices (metal bits with the letter inscriptions) into the Thames River.

Helvetica is named after a place.

Helvetica and Univers are two of the most universal fonts of all time. Both fonts were created in Switzerland in 1957. In One of the little-known facts about fonts is that Helvetica is the Latin word for ‘Switzerland.’

IKEA has only ever changed their font once.

In 2009, IKEA changed its logo font from Futura to Verdana. Before the switch, IKEA used an adapted version of Futura called IKEA Sans. However, they decided to make the switch when they realized that IKEA Sans couldn’t support Asian characters.

Needless to say, people weren’t too happy about it. IKEA would switch it out again in 2019 for the Noto font.

According to road sign studies, using lowercase letters for signs made it easier to read at high speeds.

Obama used the Gotham font for his campaign.

At the start of the 2008 Obama campaign, the serif Perpetua was used for campaign materials.However, then-hired John Slabyk and Scott Thomas decided to switch to Gotham.

Fancier fonts give a sense of expertise for certain professions.

According to a study, diners who got fancy fonted menus assumed that the chef had more skill. On the flipside, diners who got menus with simple fonts didn’t think too much of the chef’s skill. How’s that for facts about fonts you didn’t expect?

Helvetica can help with dyslexia.

One of the more helpful facts about fonts: For people with this learning disability, it is advised to go for sans-serif fonts with distinguishable letter spacing, at least 1.5 line spacing, and that the lowercase Ps and Qs aren’t the same glyph.

People associate some fonts with stability.

Fonts that reach people with a stable vibe are Times New Roman, Arial and Cambria.

Some fonts give off assertiveness.

Gigi, Kristen and Rage Italic are only a few fonts that appeal to creative types and industries.

There’s a font size for the optimal reading speed online.

Ideally, fonts for online material should always stay at 10 pt and above. Certain fonts also read easier, such as Arial, Georgia, Verdana, and Times New Roman.

Bodoni is the first modern typeface.

Giambattista Bodoni created what is considered the first modern typeface in the Bodoni font. Because of is fine, austere and elegant features, with clear contrast between strokes and perpendicular serifs rather than the curved serifs of the Renaissance.

Avant Garde was the first font designed for a magazine.

Futura was the first font in space.

When Paul Renner created Futura in 1927, he probably didn’t know how literal its namesake would be. The font didn’t really catch on until the 1950s, but its use culminated when NASA used Futura to engrave the aluminium plaque left on the moon as a memento of the Apollo 11 mission.