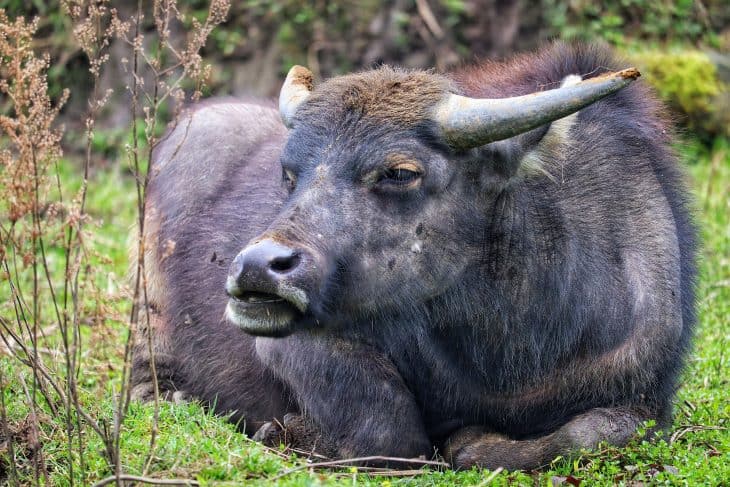 The water buffalo is a mammal famous for its strength and reliability. Domestic water buffaloes have been working tirelessly alongside humans for thousands of years. They now spread throughout many parts of the world due to their sheer usefulness in farms and other agricultural industries. Many even view these strong mammals as “living tractors”. There’s always more to learn about these interesting creatures. So read these powerful water buffalo facts to learn more about these awesome working animals.

Water buffaloes wallow in water or mud to regulate their body temperatures.

The water buffalo gets its name from its tendency to spend most of its time wallowing in water or mud. Water buffaloes do this because they have very few sweat glands, similar to pigs. As a result, they are more sensitive to high temperatures than other bovines. They need to seek shade more often and cool themselves down by dipping themselves in mud holes or bodies of water. Water and mud also provide some protection against parasitic insects that may feed on their blood.

Sometimes, they may even submerge themselves almost completely underwater, only leaving their nostrils and eyes above the surface. They also may create mud holes using their horns. Water buffaloes also evolved wide-splayed hooves to help in walking through swamps and muddy grounds, as these wide hooves help prevent these large animals from sinking too deep in the mud.

There are two main types of water buffalo.

The two types of water buffalo have different genes.

Aside from having notable differences in their appearances, habitats, and behaviors, river-type water buffaloes and swamp-type water buffaloes also differ significantly in their genetic makeup. Recent studies have shown that the two types split off from one another as early as 1.7 million years ago, long before their domestication. Studies suggest that swamp-types likely originated from China, while river-types originated from India. Swamp-type water buffaloes are the closest living relatives of the tamaraw or Mindoro dwarf buffalo (Bubalus mindorensis), a critically endangered bovine species that’s endemic to the Philippines.

They have been domesticated thousands of years ago.

Many refer to the water buffalo as the “living tractor of the East”.

Water buffaloes are invaluable assets to farmers because they prove to be reliable beasts of burden. Because of their strength and ability to walk easily on muddy grounds, these working animals often help farmers in plowing rice fields. Many even refer to them as the “living tractors of the East” because of their important role in cultivating small agricultural fields. They provide as much as 20 to 30 percent of farm power throughout most of their range.

Water buffaloes also help in transporting large and heavy materials throughout many parts of the world. They are reportedly much stronger than oxen. The Turks even used these powerful animals to haul heavy battering rams during their invasions of Europe. Because of their usefulness, water buffaloes have been introduced outside of their native range in Asia and now have large populations in Europe, Australia, and the Americas.

Some police officers in Brazil ride water buffaloes on patrol.

One of the most interesting water buffalo facts is that their usefulness isn’t just limited to helping farmers plow rice paddies and pulling heavy carts — they also provide a means of transportation for some military police officers in Brazil. In the Brazilian island of Marajó, around 450,000 water buffaloes roam the land, which is way more than its human population of 383,336 in 2014. Most of the daily lives of the citizens here revolve around the help of these docile creatures, and the police are no exception.

In the 1990s, the military police started the tradition of riding these large mammals while promoting the safety of the island’s citizens. The water buffaloes reportedly swam better than dogs and were more agile than horses when traveling through muddy areas. Because of this, they’ve proved themselves to be of great value to the military police. Aside from patrolling the streets and promoting the island’s traditions, the water buffaloes and the “buffalo soldiers” also became tourist attractions in Marajó.

They can run as fast as 30 miles per hour.

One of the most surprising water buffalo facts is that they’re remarkably fast despite their stocky build and heavy weights. When in danger, water buffaloes can achieve top speeds of up to 30 mph (48.28 km/h). That’s a good amount faster than the fastest recorded human running speed, Usain Bolt’s top speed of 27.8 mph (44.64 km/h)!

They are often used for their horns, meat, and skin.

Aside from being popular as beasts of burden, water buffaloes are also highly coveted for their horns, meat, and skin. The meat of the water buffalo is highly similar to beef and is a major export product of countries that keep water buffaloes, such as India. Some people refer to it as “carabeef” after the carabao, a breed of water buffalo. Water buffalo meat is tougher than beef, but some cuisines have developed cooking methods that make it more tender.

They have highly nutritious milk.

The milk of the water buffalo is a valuable resource as well. Each year, water buffaloes around the world produce up to 72 million tons of milk, more than 5% of the world’s milk supply. In 2008, India alone produced 56,960,000 tons of water buffalo milk and was the world’s top producer of this valuable animal product.

Compared to cow’s milk, water buffalo milk has less water and is remarkably richer in solids such as fat, lactose, calcium, phosphorus, and protein. Because of the high solid content in the milk of water buffaloes, it’s ideal for the production of cheese, ghee, whey, and butter. Some notable examples of water buffalo cheese products are mozzarella, domiati, kesong puti, khoa, and surti paneer.

Water buffaloes are social animals that tend to live in herds.

Similar to other herding animals, water buffaloes tend to find safety in numbers. They typically live in tightly-knit herds that often consist of mothers and their offspring. The leader is generally the oldest female water buffalo of the herd, most likely the mother of the other members. Herds typically host 10 to 20 individuals, but some herds can even include up to 100 water buffaloes. These herds share a common territory in which they drink, feed, wallow, and rest. They communicate with each other through body language and some vocalizations.

Male water buffaloes leave their herds to form bachelor herds with other males.

Female water buffaloes often stay in the same maternal herds they grew up in, but males have to leave their herds when they reach sexual maturity at the age of three. Male water buffaloes then either wander alone or group up with other males to form bachelor herds. Bachelor herds typically have up to 10 individuals and occupy a larger range than female herds. When it’s time to mate, the males enter the female herds and mate with receptive females. Afterward, the females will drive the males off.

Water buffaloes tend to produce one calf every two years.

Generally, water buffaloes can mate all year round, but some populations do have seasonal mating patterns, often after the rainy season. Among all the members of the bovid family, water buffaloes have the longest pregnancy period — it ranges from 300 to 340 days. They often only give birth to one calf every two years, but twins may sometimes occur. Female water buffaloes nurse their calves for six to nine months.

Their guts are loaded with bacteria and fungi that help them digest plants.

They can live up to more than 30 years in captivity.

Water buffaloes can be quite dangerous.

Although water buffaloes are generally docile and harmless, they can still be quite dangerous because of their massive size, large horns, and remarkably fast speeds. Their only natural predators in their native habitat are tigers, crocodiles, and humans. When water buffaloes see tigers, they tend to stick together and charge in a line. Male water buffaloes may also charge to assert dominance, and females often become more defensive when nursing their young. Water buffaloes have been known to cause human injuries and even fatalities.

A real water buffalo was slaughtered in the American film Apocalypse Now.

In Francis Ford Coppola’s 1979 American film Apocalypse Now, a real water buffalo is seen slaughtered in the climactic scene. The Ifugao tribe in the Philippines performed the ritual sacrifice of the water buffalo. Because of this gruesome scene, the film garnered criticism and controversies regarding animal welfare.

In some areas, wildlife conservationists introduce domesticated water buffaloes into the wild to help control the growth of invasive and unwanted plants. Their feces also makes for nutrient-rich fertilizer. However, if their populations remain unchecked, water buffaloes can also cause environmental damage. They can trample over and eat crops, disperse invasive plants, and contribute to soil compaction. Furthermore, feral male water buffaloes can invade domestic herds, kill tame males, and produce offspring with resident female water buffaloes. This often results in offspring that are less docile than captive-bred buffaloes.

Their ancestors are now endangered.

As of 2010, the population of wild water buffaloes is reportedly as few as 3,400 individuals. Most of these wild water buffaloes live in India. Researchers project that their populations might even lower in the future. This is due to the fact that they compete or even interbreed with the domestic species, face habitat loss because of human activity, and also face hunting by humans.

Some countries have cloned water buffaloes.

Guangxi University in China reportedly was successful in producing the world’s first cloned water buffalo in 2005. In India, scientists also successfully cloned a Murrah buffalo (another breed of water buffalo) in 2009. However, the calf died five days after her birth. The country also produced several other water buffalo clones. 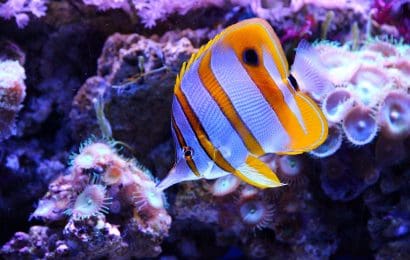