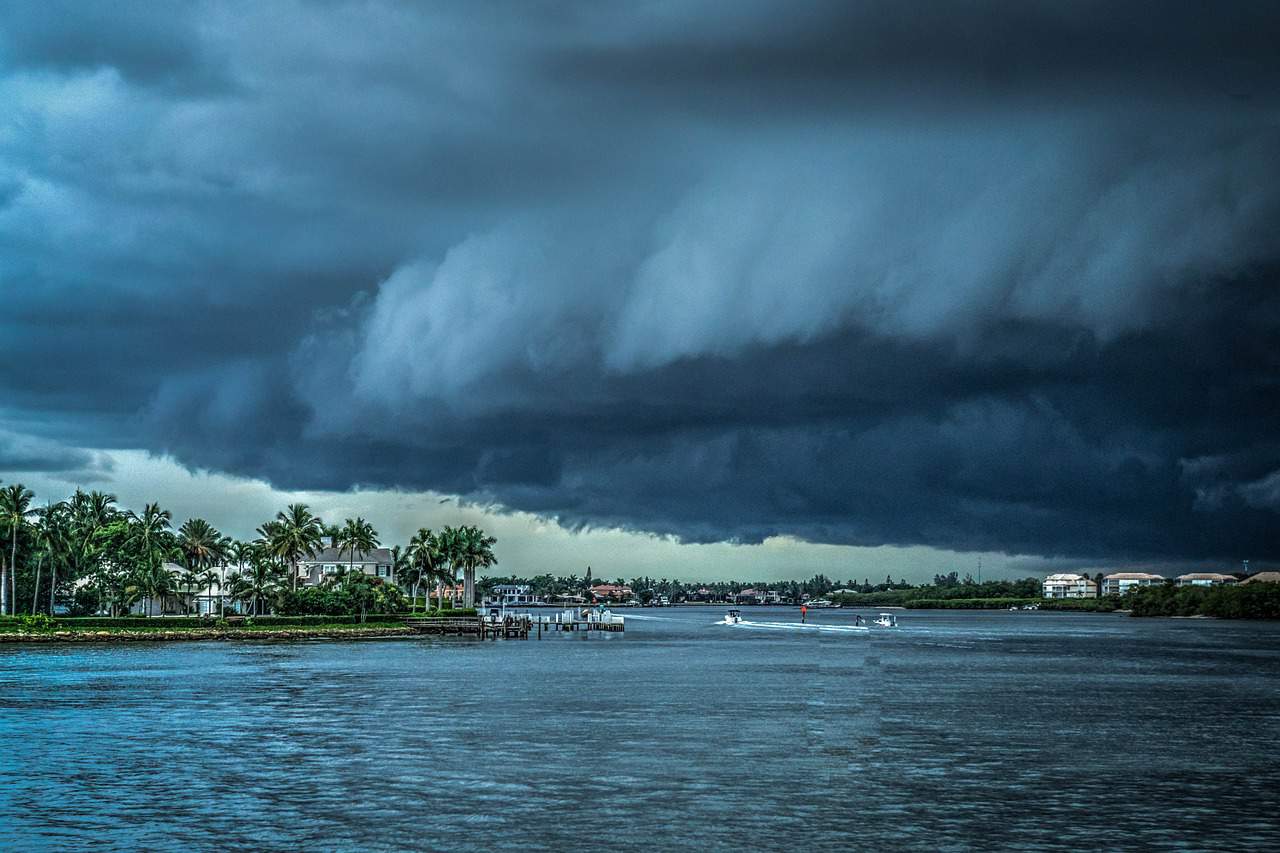 Hurricanes are huge forces of nature. It can be destructive so we should know everything about it. To do that, here are some hurricane facts that will blow you away.

Quick Facts
Essential Facts
Interesting Facts
Table of Contents
01 We measure hurricanes on a scale from 1 to 5.
02 A hurricane's size can reach up to 600-800 km in diameter.
03 The number of hurricanes increased over the years.
04 Hurricanes seem to be "evolving".
05 Hurricanes are also described as cyclones and typhoons.
06 The Great Galveston Storm is the deadliest hurricane in U.S. in 1900.
07 The strongest hurricane in the Atlantic is Hurricane Wilma.
08 The difference between tropical depression, tropical storm, and a hurricane is their strength.
09 There are 5 hurricane categories.
10 There is a difference between a hurricane watch and hurricane warning.
11 The longest hurricane lasted for 31 days.
12 The average number of hurricanes per year is 10.
13 There is a difference between Northern and Southern Hemisphere hurricanes.
14 Hurricanes can sustain itself for as long as a month.
15 A single hurricane can bring a trillion gallons of water.
16 The biggest storm recorded was Typhoon Tip in 1979.
17 The Bhola Cyclone took not less than 500,000 lives.
18 Voodoo practitioners dropped by 90% after Hurricane Katrina.
19 Hurricane Sandy did not deter the guards of the Unknown Soldier's Tomb.
20 Scientists are not certain what triggers a hurricane.
21 Female hurricane names started in 1953.
22 Hurricane Katrina and Harvey are the costliest hurricanes.
23 Hurricanes named after a woman tend to be more dangerous.
24 Hurricane activity follows an alphabetical trend.
25 At least 40% of hurricanes in America hit Florida.
26 You can survive a hurricane without leaving your house.
27 Always be prepared for a hurricane.
28 There is a common misconception in opening the windows during hurricanes.
29 Hurricanes stop droughts.
30 Here are some hurricane names that have retired.

We measure hurricanes on a scale from 1 to 5.

Meteorologists use the Saffir-Simpson Hurricane Wind Scale to measure hurricanes. It runs from 1 to 5 rating category and based on sustained wind speed and potential property damage estimation. Miami engineer Herbert Saffir and Robert Simpson developed this scale in the 1970s.

The number of hurricanes increased over the years.

Hurricanes seem to be "evolving".

There are incredible distances from hurricanes that hit the United States. Hurricanes start with a huge, complicated butterfly effect that starts over in Africa in the Sahara Desert. Hurricanes seem to be “evolving” as well, as there is an increase in hurricane counts and their strength.

Hurricanes are also described as cyclones and typhoons.

The Great Galveston Storm is the deadliest hurricane in U.S. in 1900.

Over 100 years ago, a strong hurricane hit Galveston, Texas, United States. The nameless hurricane holds the record for the deadliest hurricane in U.S. history. It caused the death of more than 8,000 people.

The strongest hurricane in the Atlantic is Hurricane Wilma.

Hurricane Wilma is the strongest Atlantic hurricane that has ever recorded, after reaching 882 MBAR in October 2005. This also made Wilma the strongest tropical cyclone around the earth outside of West Pacific.

The difference between tropical depression, tropical storm, and a hurricane is their strength.

Although the scale, strength, and duration of each storm can vary considerably, each storm has to exceed such wind speeds before it becomes a hurricane. It needs to pass through several phases before it gets a name and category.

There are 5 hurricane categories.

The longest hurricane lasted for 31 days.

Hurricane/Typhoon John passed through both eastern and western parts of the Pacific Ocean. This lasted for 31 days in 1994, and this is longer than any other hurricane.

The average number of hurricanes per year is 10.

There are about 10 tropical storms per year and about 6 of them transform into a hurricane that develops over the Atlantic Ocean,  Caribbean Sea, or the Gulf of Mexico from June to November. Fortunately, most remain over the ocean. However, approximately 5 hurricanes strike the United States coastline every 3 years.

There is a difference between Northern and Southern Hemisphere hurricanes.

Hurricanes can sustain itself for as long as a month.

A typical hurricane lasts between 12 and 24 hours. But like Hurricane John in 1994, it sustained itself for about a month. Hurricane John was the longest-lived hurricane ever noted, detected from the Eastern Pacific to the Western Pacific and for a total of 31 days crossing back to the Central Pacific.

A single hurricane can bring a trillion gallons of water.

The biggest storm recorded was Typhoon Tip in 1979.

Typhoon Tip was the biggest and most intense tropical cyclone ever recorded that affected Caroline Islands, Philippines, Korean Peninsula, Japan, Northeast China, Russian Far East, and Alaska in 1979. It had the strongest winds of 305 km/h (or a category 5 hurricane). If there is a bright side for Typhoon Tip, it only has 99 fatalities recorded compared to other weaker hurricanes that took thousands of lives.

A hurricane that occurred in Bangladesh in 1970 (Bhola cyclone), took away the lives of more than 500,000 people. This hurricane is supposedly the worst, in terms of loss of life.

One of the most surprising impacts occurred in the voodoo community. Before, they have 3,000 voodoo practitioners then dipped to 300 after the storm.

Hurricane Sandy did not deter the guards of the Unknown Soldier's Tomb.

The Unknown Soldier’s Tomb (a monument dedicated to deceased U.S. service members whose remains are not identified) has guards since July 2, 1937, for 24 hours a day, 7 days a week. Even Hurricane Sandy can’t stop the guards. The mighty guards of the post did not evacuate their positions during the hurricane even though they had the permission to hide. Instead, they voluntarily choose to stay in the middle of a hurricane.

Scientists are not certain what triggers a hurricane.

Science says that hurricane usually forms during warm temperatures. The moisture of the air over the ocean rises and creates a spiral effect with a lowered air pressure. But what confuses the scientist is that hurricanes do not always happen in the right conditions or what triggers a hurricane. For now, hurricanes will just be there whenever they feel like it, making the researchers more puzzled.

The National Hurricane Center was the first organization to give hurricanes female names in 1953. But, after the feminist groups protested over the suspected slur that women alone are tempestuous and unpredictable, they began to use men’s names in 1979.

Hurricane Katrina and Harvey are the costliest hurricanes.

Hurricanes named after a woman tend to be more dangerous.

Researchers at the University of Illinois at Urbana backtracked the previous 60 years of hurricane incidents and they found out that female hurricane names tend to be more dangerous and deadly because of the psychology behind it — female names are less threatening and sound less dangerous.

The World Meteorological Organisation maintains a list of names assigned to tropical storms in alphabetical order. They can reuse the names after 6 years.

At least 40% of hurricanes in America hit Florida.

Florida is the most hurricane-prone area in the United States. At least 40% of all hurricanes in America hit Florida, while the most vulnerable to hurricanes are the Atlantic Coast, the Gulf of Mexico, and the Hawaiian islands.

You can survive a hurricane without leaving your house.

If you don’t have plans in evacuating your house, it is best to stay inside and look for a safe spot away from glass doors and windows because this might break during the storm. The safest places to hide is under the basement or inside the closet.

Always be prepared for a hurricane.

Hurricane preppers should store drinking water that can last for over a week, canned foods, batteries, battery-powered radio, flashlight, and a whistle to signal for help. But remember, having a strong and positive mindset is also one of the most important assets in survival.

There is a common misconception in opening the windows during hurricanes.

It is a common misconception to open the windows during hurricanes to balance the pressure in the house so that the windows won’t break (logically), but according to the experts, doing this “strategy” will only weaken the house by allowing more wind, unwanted debris and rain to come inside your area. The safest thing to do is hide in the most sturdy area of your house.

May is the least active month for a hurricane and September is the most active. It is mostly observed during late summer and early fall months. But one advantage of a hurricane is it can bring an end to droughts.

Here are some hurricane names that have retired.