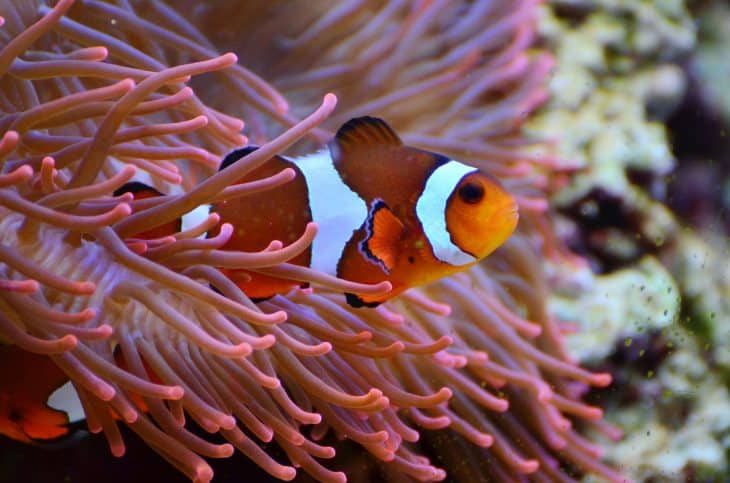 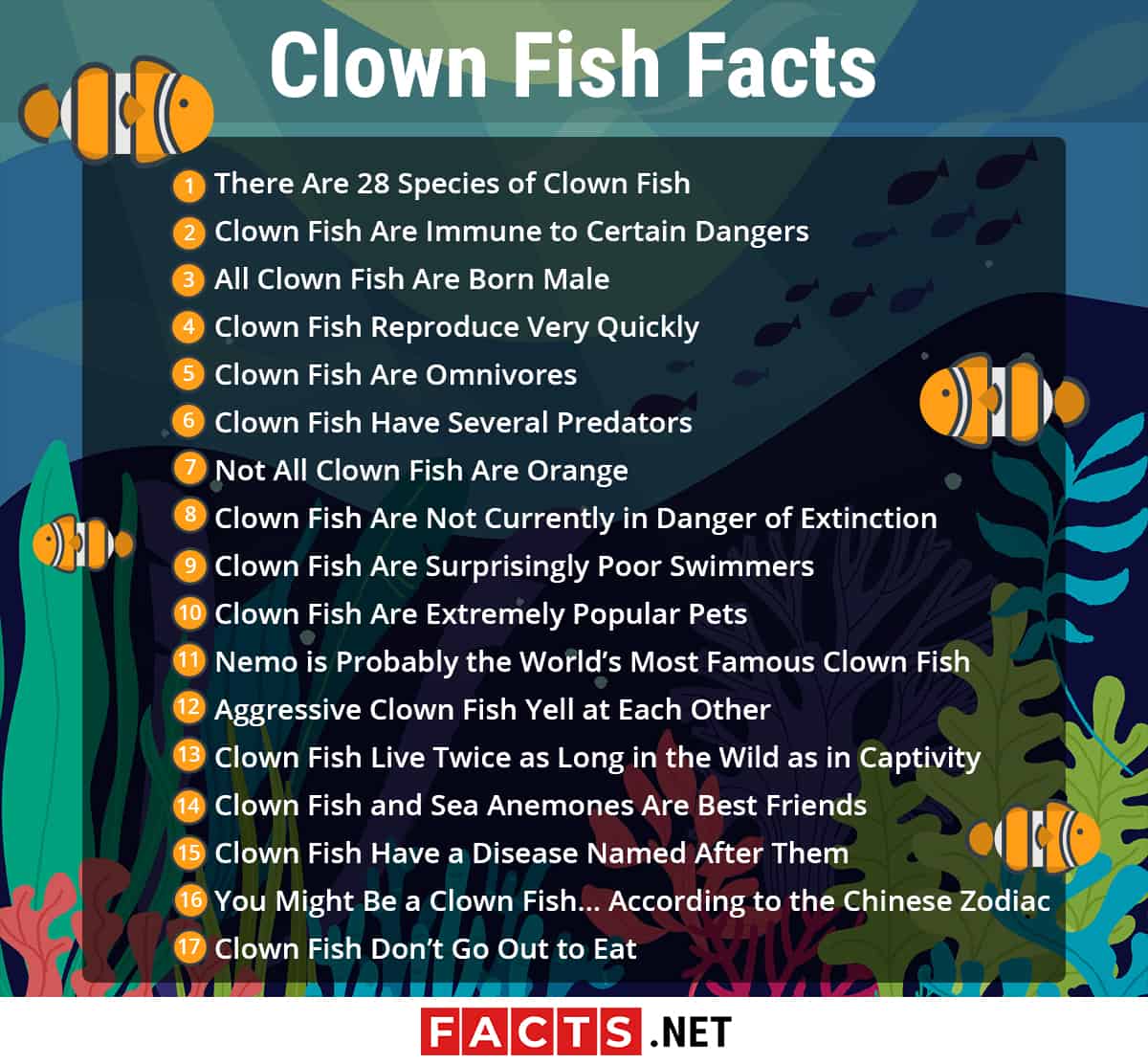 There Are 28 Species of Clown Fish

There are 28 recognised species of anemone fish, or clown fish, according to clown fish facts. They are mostly found in tropical coral reefs in the Indian and Pacific Oceans. The clown fish can be found as far north as the Red Sea and is a popular fish people like to see when exploring the famous Great Barrier Reef off the east coast of Australia. Clown fish are almost a guaranteed exhibit at any aquarium and are a common addition to many household aquariums as well.

Sea anemones are predatory animals that spend most of their time attached to rocks at the bottom of the sea. They also live on coral reefs. They wait for fish to come by and get close enough for them to strike them with their venom-filled tentacles.

Clown fish – somewhat surprisingly – make their homes in these sea anemones but they are immune to the stings these creatures produce. They actually find safety in the sea anemones from other predators who don’t notice that they are there.

All Clown Fish Are Born Male

Clown fish need to always be on the lookout, as they have many natural predators. Luckily, clown fish are difficult to catch because they often hide in the sea anemone that they live in. Most other sea creatures will avoid the sea anemone, but many species of fish, sharks and eels will eat a clown fish if the opportunity presents itself. Clown fish mostly have to worry about humans though, who catch them to sell to aquariums, pet stores and households.

Not All Clown Fish Are Orange

As previously stated in our list of facts, there are 28 species of clown fish throughout the world. Most people are familiar with the small orange fish with white and black stripes, but there are actually many different colours associated with clown fish. Clown fish can be found in shades of red, pink, yellow and even green. For the most part, the stripes remain white. Their size and shape can also differ from species to species.

Clown Fish Are Not Currently in Danger of Extinction

Even though there is much concern about the state of the oceans as pollution increases and water levels are changing, the clown fish have so far remained resilient. This is mainly because the female lays so many eggs at one time. Even though not all of the eggs will hatch and not all of the young clown fish will survive, there are plenty of clown fish that hatch in every spawn. This keeps the clown fish population very high. Aquariums and breeders also keep the population in good standing.

One of the more surprising facts on this list tells us that these fish are certainly not the best swimmers in the ocean. They spend much of their time hiding in the sea anemone they live in. When they do venture out, their swim patterns are very erratic. They are known to swim sideways at times and, while they can swim quickly for short burst, they can’t keep up this speed to avoid a predator for too long. They rely on their habitat for protection rather than their swimming skills.

Clown fish facts tell us that clown fish account for almost half of all global marine ornamental trade. Some 25% of these fish come from breeders while just under 25% are sourced from the wild. Some clown fish adjust to captivity better than others. The maroon clown fish is known to become very aggressive when captured but the false percula clown fish adjust quickly, especially when placed with fish of the same species. There are some species of clown fish that should not be mixed together in an aquarium.

Nemo is Probably the World’s Most Famous Clown Fish

Clown fish become incredibly popular after the extremely successful children’s movie Finding Nemo was released. The main character was a clown fish who became separated from his father. Audiences fell in love with the fish and interest in owning one spiked. Aquatic stores and fish breeders experienced a large increase in the popularity of the clown fish. Unfortunately, many people who purchased their first clown fish after seeing the film did not realise the work involved in caring for such a fish and many of the clown fish died.

Aggressive Clown Fish Yell at Each Other

It can be incredibly difficult to create the perfect environment for a clown fish in an aquarium at home. A professional aquarium is a better place for clown fish that have been captured. But, if you do prefer to have clown fish at home, it is important to know that this will usually shorten their life. Clown fish facts tell us that these fish will usually only live up to the age of 5 years in an aquarium while they can live up to 10 years in the wild.

Clown Fish Have a Disease Named After Them

Clown fish facts tell us to be on the lookout for a disease called Brooklynella when caring for clown fish. Many fish can get this disease, which is a type of saltwater condition caused by an infestation that gets into the gills of the fish. Brooklynella is actually called Clown Fish Disease by some because it is so easy for them to become infected. If you have a clown fish and notice a thick white mucus beginning to cover the body of your fish, you should look into treatment options immediately.

You Might Be a Clown Fish… According to the Chinese Zodiac

If you have the Tropical Sun sign of Libra and was born during the Chinese Zodiac Year of the Sheep, you are classified as a Clown Fish. Clown Fish are described as peaceful, creative and elegant individuals who have good taste when choosing friends. They keep a sophisticated appearance and have neat and organised homes. They are polite and have good manners but also usually suffer from social anxiety and are a bit insecure. They need love and approval to thrive.

There are many restaurants that have “clown fish” in their name. But chances are, you won’t find clown fish on the menu, according to clown fish facts. Some countries do indulge and enjoy eating these fish, but, for the most part, they are only for viewing. Part of the reasoning is that these fish are very small and wouldn’t have much to offer from a nutritional perspective. Some clown fish are only 2 inches long, while other species can be nearly 8 inches long. 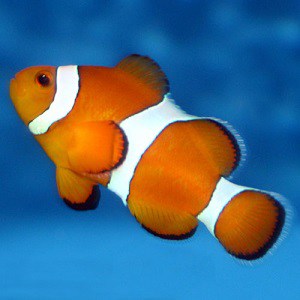 Clown fish facts will tell you all about these well-known fish, including details of where they live, what they eat, what eats them and how they protect themselves. Learn what is involved in getting a clown fish for your home and the challenges that could arise. Discover how pop culture affected this fish and made it one of the most recognised fish in the ocean.