Largest Owl in the World 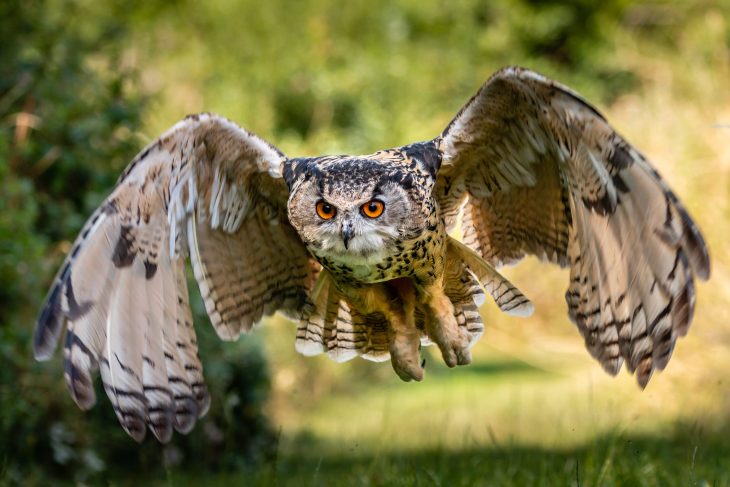 Owls are some of the most recognizable birds in the world. This doesn’t come off as a surprise, as the various species of owls are found in every continent on the planet, except Antarctica. These many species of owls come in many shapes and colors, with some small enough to sit in the palm of your hand. Others, though, can grow much bigger than most people expect. With that, here are the ten contenders for the world’s largest owl.

The largest owl in the world, the Blakiston’s Owl Fish, which name was taken from British naturalist Thomas Blakiston, was first documented in 1883. It can grow up to 72 cm long from beak to tail, with a wingspan of up 200 cm. Many of them live in the Far East, on the Japanese island of Hokkaido, and on the Russian islands of Sakhalin and Kuril. It can also be spotted in China’s Manchurian region, as well as along the coast north of the Russian city of Vladivostok.

Unfortunately, the bird suffers an endangered status caused by the destruction of its native habitat by human development. In Japan alone, scientists estimate that only 150 Blakiston’s Fish Owls remain in the country. Russia has the biggest population of Blakiston’s Fish Owl, at an estimated 1,500 birds. Geneticists express concern for the bird’s future, as their small population could result in inbreeding. This, in turn, would make them more vulnerable to hereditary diseases.

The Eurasian Eagle Owl can actually grow to have a longer body than Blakiston’s Fish Owl, at up to 75 cm long. However, they have smaller wingspans of only up to 188 cm, making them only the second-largest owls in the world. The Eurasian Eagle Owl lives across most of Asia, though they avoid the tropical regions of South and Southeast Asia. They also avoid the cold regions of Siberia and Northern Europe but have since spread into Southern Europe.

The bird’s vast habitat range has allowed its population to grow, with scientists estimating up to a million Eurasian Eagle Owls in the world today. This, in turn, has made the bird a species of least concern for environmentalists.

This fascinating bard has the nickname “Phantom of the North”, based on how its gray plumage makes it almost invisible against the surrounding environment. The bird also has the distinction of the longest owl in the world, able to grow to a length of 84 cm from beak to tail. However, it only has a wingspan of up to 152 cm, much less than that of an Eurasian Eagle Owl.

The Great Grey Owl originally came from Northern Asia, from where it migrated to North America. Today, it mostly lives in Russia and Canada, though the USA has a small population in its northwestern states. While human development of its habitat has impacted the species, the Great Grey Owl has managed to maintain its stable population. This has made it a species of least concern for conservation purposes.

The most iconic owl of them all, the Snowy Owl comes to mind when most people hear the word “owl”. It takes its name from its mostly white plumage, though the bird does sport specks of black on its wings and back. This lets the bird perfectly blend into its environment, that of the permanently frozen and ice-covered Arctic. This has also given the bird its alternative name of the Arctic Owl. That said, Snowy Owls sometimes fly into Sub-Arctic regions to nest and hunt.

The birds grow up to 71 cm long, with a wingspan of up to 183 cm. In a surprising twist, the biggest threat today to their future isn’t human development on their habitats, but airplanes and vehicles. The birds crash into them while flying, usually suffering fatal injuries as a result. This has caused their population to drop to just an estimated 100,000 birds, making them a vulnerable species.

Also known as the Milky Eagle Owl or the Giant Eagle Owl, Verreaux’s Eagle Owl makes up the largest in Africa and the largest owl in the tropics. It takes its name from French naturalist Jules Verreaux, who first documented the bird in the early 19th century. The bird grows up to 66 cm long, with a wingspan of up to 164 cm. It lives across the African continent south of the Sahara Desert, which has kept the species from expanding north.

The species has also shown surprisingly adaptability over human development of its habit, having repeatedly changed its feeding patterns to survive. Scientists still remain unsure of Verreaux’s Eagle Owl’s overall population, but it currently counts as a species of least concern.

The most common owl in the Americas, the Great Horned Owl takes its name from a set of feathers that stand on its head giving the appearance of horns. Their function remains unclear to scientists, at least beyond serving as a way to attract mates during the mating season. The Great Horned Owl can grow up to 64 cm long, with a wingspan of up to 153 cm.

The species lives across the entire North American continent, while also having a presence in Central America and the northern parts of South America. Parts of Brazil and Argentina in the eastern part of the continent also feature small populations of the bird. This wide range of habitats has allowed the Great Horned Owl to maintain a stable population, making it a species of least concern.

Also called the Striped Owl, it takes its name from the striping patterns across its entire body. The Barred Owl also has the distinction of the only owl in the Eastern USA with brown eyes, with every owl in the region having yellow or golden eyes. The bird can grow up to 63 cm long, with a wingspan of up to 125 cm.

They mostly live in the Eastern USA, but Southern Canada also features a large population of Barred Owls. They also count among the most successful owl species in the world today, with some scientists even calling them an invasive species. This results from their ability to outcompete other predatory birds in areas neighboring their native habitats. That and their least concern status led scientists to propose culling programs to help keep their population under control.

Also called the Powerful Boobook, this bird is the biggest owl in Australia and even one of the continent’s apex predators. They grow up to 65 cm long, with a wingspan of up to 135 cm. They live along the east coast of Australia, and up into the mountains of the Great Dividing Range. These mountains have also kept the species from expanding further across the continent.

The Powerful Owl counts as the most carnivorous owl species in the world, with meat making up 75% of its diet. It also has a divisive conservation status, with international organizations classifying it as of least concern. However, the Australian states of New South Wales and Victoria both classify it as a vulnerable species instead.

The Spotted Owl sometimes gets mistaken for the Barred Owl due to their similar appearance. However, the Spotted Owl takes its name from the cross-shaped spots on its body in place of the Barred Owl’s stripes. The species grows up to 43 cm long, with a wingspan of up to 114 cm. They mostly live in Mexico, with other populations scattered across the Southern and Western USA.

The Spotted Owl has also suffered heavily from the destruction of its native habitats by human development. Competition by the Barred Owl in some areas has also negatively affected Spotted Owl populations. This, in turn, has made the Spotted Owl into a near-threatened species according to international organizations.

Also called the Lesser Horned Owl, this bird takes its name from the standing feathers on its head similar to the Great Horned Owl. Long-Eared Owls grow up to 40 cm long, with wingspans of up to 102 cm. They have a vast range of habitats, with the birds widespread across Europe and much of Asia. They’re also found across the USA, with presence in Northern Mexico and Southern Canada. That said, in Asia they tend to avoid the cold Siberian region and the tropical regions of South and Southeast Asia.

Today, the Long-Eared Owl enjoys a least concern status for conservation purposes. However, many scientists question this, as they’ve found worrying trends of dropping populations in various areas caused by human development.