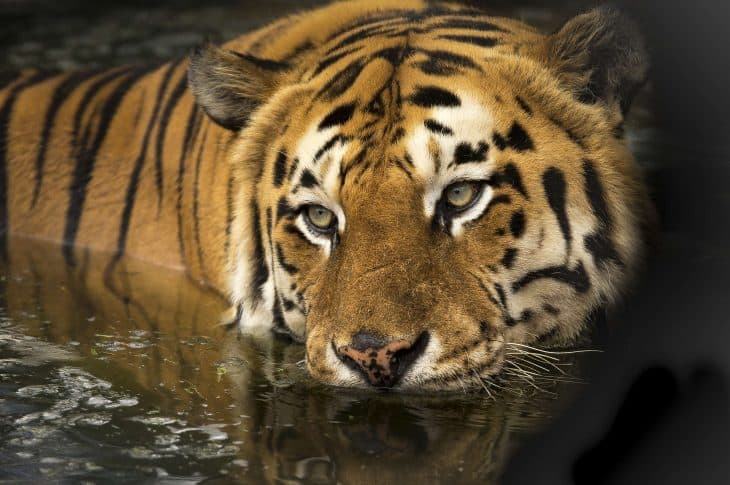 It is fairly obvious that these animals are large but let’s start off our list of Bengal tiger facts by noting that these cats are actually the largest members of the entire cat family.

They are known for their sheer power, incredible strength and, of course, their striking striped appearance. Bengal tigers, especially males, can grow to great sizes – nearly 11 feet long – and can weigh as much as 660 pounds. Females usually weigh less but these large cats almost always weigh in with a minimal weight of 300 pounds.

There Are Multiple Subspecies of Bengal Tigers

At one time, there were eight different subspecies of the tiger. Unfortunately, three have become extinct and the entire species of the tiger is currently at risk of extinction. It is estimated that the number of tigers left in the wild is fewer than 2,500.

The animals are often hunted as trophies and their body parts are widely used in Chinese medicine. While there are several protection programs in place to protect the remaining tigers in the world, including the Bengal tiger, loss of habitat and poaching continues to be a serious problem.

Many people fear these large animals, but the truth is that most Bengal tigers will always go out of their way to avoid human contact. This is becoming more difficult as villages and towns encroach on the tigers’ habitats though, and attacks have been recorded.

Such attacks are usually due to the tiger in question being ill, leaving it unable to hunt as it normally would. The loss of their habitat could also play a factor if their usual prey has fled the area, leaving the tiger hungry and with no viable source of food.

Bengal tiger facts tell us that these large cats are normally found in India. They are sometimes referred to as Indian tigers for this reason. The animal has become an important aspect of Indian tradition.

Bengal tigers can also be found in Bangladesh (the Bengal tiger is the national animal of Bangladesh), Bhutan and Nepal. The tiger can be found in dense forests, jungles and mangrove swamps. The tigers can make a home in a variety of habitats, as long as there is prey available, a steady water source and a landscape that enables the tiger to hunt successfully.

One of the more intense Bengal tiger facts tells us about their unique hunting technique. Many might assume that because of the animal’s speed, they chase their prey and tackle it.

Instead, Bengal tigers find an area in which to hide, often by a water source and at night, and wait patiently for their prey to come their way.

A Bengal tiger is able to take down prey that is twice its size but it usually chooses prey that is about its own size or smaller, including deer, wild boar, goats and cattle.

Because of the danger of extinction, it is very important that Bengal tigers reproduce. But, unlike most other mammals, a female Bengal tiger is only fertile for 4 or 5 days out of an entire year.

If conception is achieved, the gestation period lasts about 103 days. Most litters consist of 2 to 4 cubs. The cubs are blind for the first week and rely on their mother heavily until they are about 18 months old. They leave their mother after they are 2 years of age.

Bengal Tigers Purr… But Not Like a House Cat

One of the more surprising Bengal tiger facts is that a roar doesn’t usually mean aggression. Bengal tigers usually only roar when they are trying to communicate with other tigers that are not within their immediate area.

If a Bengal tiger is attacking prey or fighting with another tiger over territory, it will usually hiss or growl. The Bengal tiger does make a purring noise, but this sound is often so loud and rough that it is confused with a growl.

If you try to give a house cat a bath, it’s likely neither you nor the cat will enjoy the process! Bengal tigers, however, love the water and are great swimmers. They can swim almost 4 miles at a time. A Bengal tiger might jump into the water to cool itself off, or it might follow its prey into the water.

In 2011, a Bengal tiger was killed by a crocodile as it swam across a river. While it is common for tigers to attack crocodiles, this was the first recorded incident where a crocodile came out as the victor.

A Bengal Tiger’s Stripes Are Unique

Bengal tigers facts reveal that no two tigers are alike when it comes to their appearance. Just like all humans have unique fingerprints, any Bengal tiger’s stripes are unique to that animal and you will not find two tigers that match.

Though most people automatically picture an orange tiger with black stripes, Bengal tigers can also have more of a yellowish tint and dark brown stripes. It may surprise you to learn that if a tiger was to lose all of its fur, the same stripe pattern would be found on its skin as well.

Bengal Tigers Can Run Extremely Fast… But Not For Long

Bengal tigers can run up to 40 mph but only for short distances. This is why they rely on their unique hunting technique that allows them to spend more time resting rather than chasing their dinner.

Just like a house cat, their paws have plenty of surface area and spongy pads that allow them to push off fast while they are running. Bengal tigers are exceptional jumpers as well and can reach heights of up to 13 feet in the air!

Bengal tigers are a descendant of the well-known Sabre-tooth cat, who can be instantly recognised by its elongated canine teeth. Bengal tigers don’t have the same tooth length as their ancestor but they rely on their long and sharp teeth to catch their prey.

If they were to lose these teeth due to old age or injury, they would be unable to hunt and would most likely die from starvation. While a human could survive for over a month without food, a Bengal tiger can only survive a couple of weeks without eating.

If you ever have the chance to observe a Bengal tiger, you might notice it licking its fur. You may think they only do this to clean themselves but one of the more surprising Bengal tiger facts will tell you that this is a natural defence mechanism against infection.

A Bengal tiger’s saliva contains natural antiseptic elements that can prevent wounds from becoming infected. These elements also encourage faster healing. This is important because Bengal tigers can be injured protecting their territories or while hunting.

Bengal tigers often hunt alone as they are solitary animals but when there are cubs involved, the eating process is a bit different. A male Bengal tiger will allow the cubs and their mother to eat from his prey first before consuming anything himself.

This is the opposite of their close relative the lion, where the males always eat first, even though the females do all of the hunting. A single Bengal tiger can eat up to 50 pounds of meat in one night!

Many believe that White tigers are a separate subspecies but it may surprise you to learn that white tigers are actually Bengal tigers. Their unique colouring is caused by a gene mutation that is carried in only 1 out of every 10,000 tigers.

This means that two orange Bengal tigers can have a white tiger cub. White tigers have not been spotted in the wild since the 1950s though, so it is speculated that these specific tigers are now only found in private facilities. It is against the law to breed tigers in an effort to produce more white tigers.

Bengal tigers were some of the first animals incorporated into popular circus acts. They have been trained to follow their trainer’s instructions and jump through hoops, climb ladders or perform other acts to please a crowd.

In more recent years though, these acts have come under fire as more is learned about how the animals are treated. They travel in cramped cages and often spend most of their time in chains. To train the tigers, whips and electric shocks are sometimes used. A circus must nowadays obtain official permits In order to keep Bengal tigers.

Even Trained Bengal Tigers Are Dangerous

Bengal tiger facts tell us about an unfortunate story regarding an American trainer that took place in February of 2013. During a circus performance in Mexico, a Bengal tiger mauled the trainer suddenly and in front of the circus audience.

The trainer died a few days later from blood loss and other injuries. The animal was also killed as a result of the incident. This was not the first incident of a circus animal attacking their trainer, and had led to more circuses moving away from working with dangerous animals.

As mentioned in several of the previous Bengal tiger facts, all subspecies of the tiger are in danger. Some scientists estimate that the Bengal tiger could be extinct in the next 10 years. There are several organisations in place that are dedicated to saving the Bengal tiger, including the World Wildlife Foundation.

You can symbolically adopt a tiger, providing funds that will be used to protect the animals, or make a monetary donation that could save these tigers from ceasing to exist. 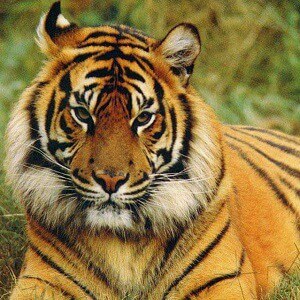 Bengal tiger facts will tell you all about these stunning animals, focusing on their captivating appearance, reproduction cycle, hunting techniques, habitat and their relationships with humans. Learn about some of the unique qualities that separate this animal from its relatives, like how it enjoys cooling off in rivers and streams. Find out what a tiger roar means and if these large cats purr. These facts will also focus on the conservation status of these animals and what you can do to make a difference.