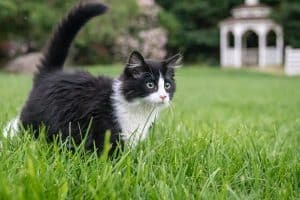 Associated with status and luxury, a person wearing tuxedos usually demands respect and authority. However, tuxedo cats are relatively chill animals.  You may not even notice, but tuxedo cats are a surprisingly common kind of cat that you can find just about anywhere. However, they still have their charming points. Find out more about these felines with these facts about tuxedo cats.

Tuxedo cats have to meet strict guidelines in cat shows.

If you want to register a tuxedo cat for official events, your feline friend has to pass the standards set by the Cat Registry Internationale Feline (FIFe) and Cat Fancier Organization (CFO). To qualify for cat shows, tuxedo cats must have at least half of their fur any color other than white, while no more than three-fourths of their fur must be white.

These authorities also automatically disqualify any cats with ‘lockets’ or ‘button patches’, otherwise known as a single small patch of white on their chest.

As their name suggests, proper tuxedo cats have a pattern resembling a tuxedo. Specifically, they have a solid coat of black fur over most of their bodies, resembling a tuxedo jacket. The white fur on their paws, chest, belly, and throat further completes the resemblance.

Tuxedo cats also commonly have a white chin, and a white tail in some cases. The white chins, in particular, give tuxedo cats something of a masked appearance, thanks to the contrast with the black fur around their eyes.

The cow cat variation doesn’t have a solid coat of black fur. Instead, they have a largely-white coat of fur, with random patches of black fur over their bodies. This gives them a similar coloration to your common cow, hence the name. However, cow cats still retain the masked appearance of tuxedo cats.

Some tuxedo cats have goatees.

This happens when a tuxedo cat has black fur on their chin, with a stripe of white running over their face between the chin and the black fur around their eyes.

The most famous cat on TV is a tuxedo cat.

Anyone who’s had a childhood can probably remember Tom from the popular long-running cartoon, Tom and Jerry. While it’s never used in the show, his full name Thomas Cat references him as a tomcat, a common term for big-bodied male cats. Despite having a coloration of grey and white instead of black and white, he still qualifies as a tuxedo cat.

A tuxedo cat once lived in the White House.

Chelsea Clinton, the daughter of former US President Bill Clinton took care of Socks for years. The Clintons actually adopted him as a stray before Bill Clinton’s election in 1992. Afterwards, Socks moved with his family into the White House and became a mascot for the new White House website during the Clinton Administration.

A tuxedo cat appears in the musical Cats.

He goes by the name of Mr. Mistoffelees and possesses magical powers that he struggles to control. In the musical, he acts as a feature dancer with his own signature move, the Conjuring Turn. His dance solo also features some of the most complicated and difficult choreographies in the entire musical. Occasionally, Mr. Mistoffelees also goes by the alias of Quaxo.

A tuxedo cat also appears in the Shrek franchise.

First appearing as a villain in the spinoff Puss in Boots, Kitty Softpaws is the only tuxedo cat in the Shrek films. At first, she tricked Puss into imprisonment, but eventually fell in love with him. Afterwards, she helps Puss break out of prison, and worked with him for the rest of the film.

Penelope Pussycat from Looney Tunes is also a tuxedo cat.

She’s also the unfortunate love interest of the French skunk Pepe Le Pew. Most of the show’s arcs for each character just involve Penelope trying to get away from the skunk. The only time she ever shows interest in him is when she’s under the influence of a love potion.

A tuxedo cat in London has an official position from the British government.

Say hello to Palmerston, Chief Mouser of the Foreign & Commonwealth Office of the British government in London. Named after the former prime minister Lord Palmerston, Palmerston has held his position since 2016. The name of the position hints at Palmerston’s responsibilities: to catch any mice that go inside the office.