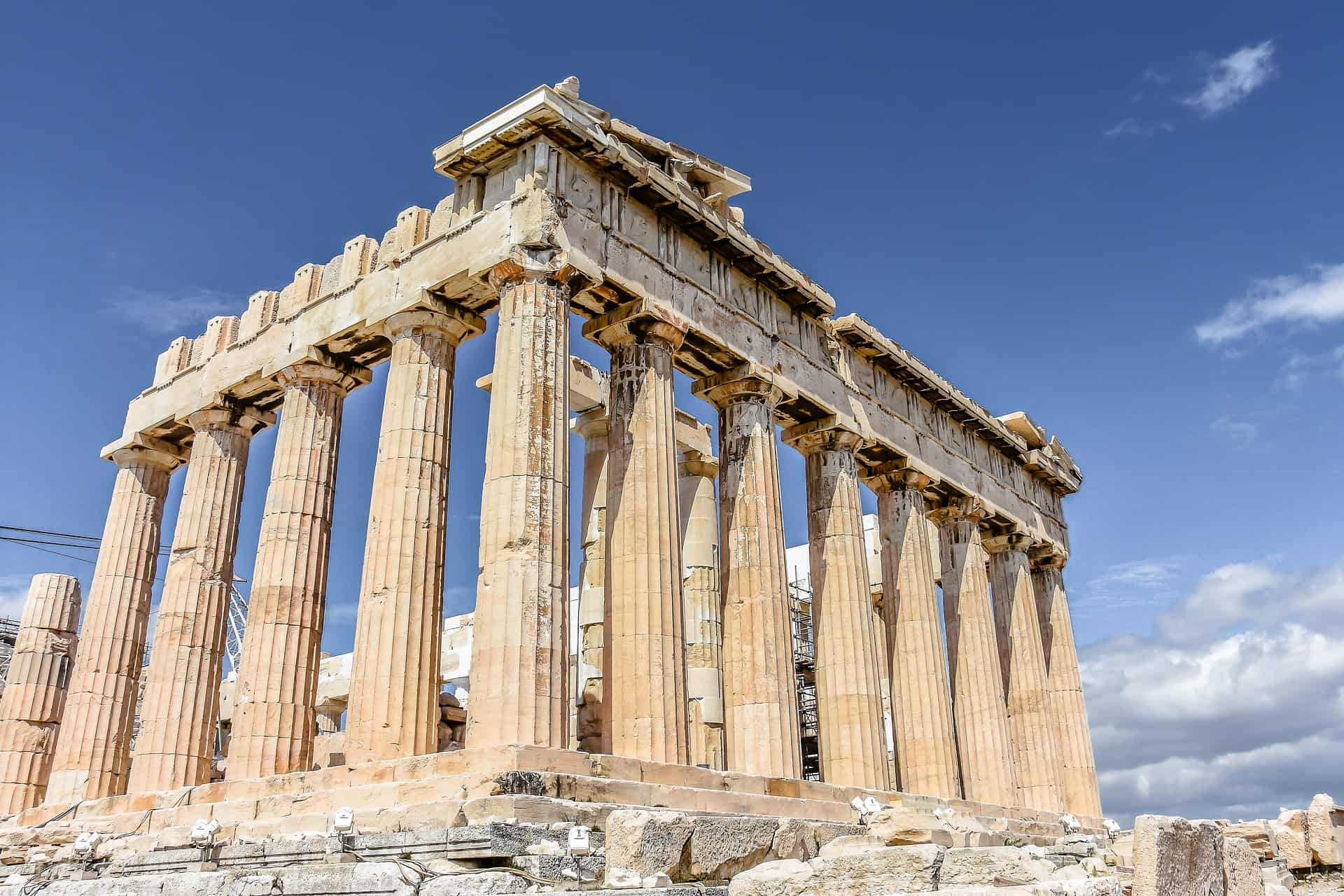 The first of our interesting Ancient Greece facts tells us a little about their dietary habits. While they ate a lot of fish, fresh vegetables and fruit, which were easy for them to catch, grow or barter for at market, they rarely ate meat. They firmly believed that this was something that only Barbarians did and that as Greeks they were much more civilised. They would therefore only eat meat that had been offered as a sacrifice to the gods first. Even today, the Greek diet involves more fresh fish, fruits, vegetables and olive oil than anything else.

Not just an important foodstuff, which gave a rich, delicious fruit to eat and provided oil for cooking, the olive was also a huge part of Greek history as we’ll see in the next of our Ancient Greece facts. Ancient Greeks believed that the goddess Athena was the first person to give an olive tree to Greece, before they were grown anywhere else. Olives were not just used for culinary purposes. Women used the oil as a restorative beauty product to moisturise their skin – in fact the use of olive oil as such a beautifier has recently come back into fashion. The skins from the fruits were also used to make lamps for the people of Ancient Greece.

The Earliest Incarnation of the Alphabet Was Developed in Ancient Greece

The next one in our collection of fascinating Ancient Greece facts tells us a little about their alphabet. The first incarnation of a semi recognisable alphabet was brought to the region by the Phoenicians, another ancient peoples who hailed from what we now know as Lebanon. This was a simple system of letters which the Greeks adapted. The initial system was mainly what we would now recognise as consonants. The Greeks added in vowels and also decided how each letter should be pronounced. They even gave us the name for the collection of letters that we know now – alphabet. This comes from the first two letters, merged together: alpha and beta.

The people of Athens thought their city was the finest in the world. The Acropolis was one of many collections of buildings all over Ancient Greece built to symbolise the strength of a territory by being set in place as a fortress. The Acropolis was originally built around 495 BCE to 429 BCE, during the reign of Pericles, a popular ruler who brought peace and stability to the region. It was put in place to guard the city from attacks and keep it safe, and was built around 500 feet above sea level. As years passed by and the region became more settled, the population turned it into something which showed the beauty and prosperity of the city, instead. It didn’t always work out as planned; over the following centuries, it was attacked and destroyed, and parts lay in ruins, but the fact it’s standing today is testament to their strength.

This next of our interesting Ancient Greece facts shows us a little about the educational beliefs of the population. Unless you were a very wealthy young man, you would not be properly educated at all. Your learning would be done informally within the home. Formal education was for wealthy men only and took place in schools with private tutors (for instance, Alexander the Great’s private tutor was Aristotle!) Girls would not be educated at all, and young boys would be taught very different things to the kinds of subjects we learn in schools now. Something called Rhetoric was a major subject – boys would learn to memorise famous speeches and poetry. If a boy lived in Sparta, he would be more likely to have a military education only. If a boy lived in Athens he would be taught other scholarly subjects, history, math and so on.

The himation was a coat which both men and women wore during the cold months to keep them warm. It would be simply pinned in place. But for many it had multiple uses. Soldiers, for instance, would be able to remove it and use it as a blanket at night. In general, men and women had similar clothes. Both sexes would wear tunics called chitons, which were worn as comfortable, convenient outfits that could be arranged in a few different ways. Men’s chitons were made from lighter material than women’s as men had to work outdoors more.

The Olympics First Took Place in Ancient Greece in 776BCE

The sporting event we’re all now so familiar with forms the basis of the next of our interesting Ancient Greece facts. Originally, the games were created to honour Zeus. Only Greek men could take part and the games were created to train men up to take part in wars. Unlike now, where athletes train in specialist clothes, men competing in the first Olympics did so naked. They ran, wrestled, boxed and took part in chariot races as part of their regime.

Pheidippides (530 BC – 490 BC) was a Greek hero. He ran a distance of 150 miles from Marathon to Sparta to seek help in repelling the Persians who the Greeks were at war with. After the Greeks won the war against them, he ran 25 miles back from Marathon to Athens to announce the victory. That’s where we get the name for long distance running event from!

The Yo-Yo Was Invented by the Ancient Greeks

We still play with them today – perhaps not as much as in the past, but they’re still a toy we all know. The roots of this humble play thing go all the way back to Ancient Greece. It was invented around 500BC. There is a painting on a vase from the time which shows a young boy playing with two terracotta discs wound together with twine. The yo-yo is still believed to be the second oldest toy in the world.

We know very little about famous Greek Philosopher Socrates’ works, because he actually wrote very little down. He believed in constantly questioning everything and seeking reason. In the end, he questioned the existence of God. This angered Greek leaders and they imprisoned him. He was accused of corrupting the youth and, while incarcerated, he drank poison and died.

In pretty much the same way we do today, the next of our fascinating Ancient Greece facts tells us how much the people loved their dogs. They were prized as hunters, but were never fed by their owners. Ancient Greeks believed their pet dogs had to catch and kill their own food. There were three main types of dog in Ancient Greece: the Laconian, the Molossian and the Cretan. All of them were huge dogs, bred for hunting.

As a rule, children had a tough entry into life anyway, with many not reaching past their first few weeks in Ancient Greece. However, if a baby was born with a disability or deformity in these times, it would be highly likely that the families would simply abandon the baby, either by leaving them on the streets in the hope that someone would take pity and raise them as a slave, or simply leaving them to die.

Young Girls Were Married at 12 or 13 in Ancient Greece

Today, we don’t consider marriage until much later on than the Ancient Greeks did. As soon as a girl was 12 or 13 years old in Ancient Greece, her father would search for a suitable husband for her. Marriages took place in three stages. The girl would be separated from her own family, then she would transition into her husband’s home. Lastly, she would learn to become a wife to her husband, and a daughter to her husband’s parents.

Ancient Greeks Did Not Wear Shoes!

On the whole, they preferred to go barefoot as much as possible. They would sometimes wear slippers, much like we might do in the house, or other soft soled shoes, but more often than not kept their feet naked. Babies and small children wore neither clothes nor shoes. Historians believe it was entirely possible for a person to go through their entire life in Ancient Greece without ever putting anything on their feet!

The last of our fascinating Ancient Greece facts tells us about how the children of the era played. They had many games that we might recognise today, including a game akin to modern day basketball, called Passe-boule. However, more of interest is how they made their balls for game play! Very often they would use a pig’s bladder for this. After the pig had died, the bladder would be removed, cleaned and blown up into a ball shape. It would be “set” into the desired shape by being held over a fire to mould it. To make them look more aesthetically pleasing, the bladders would sometimes be painted with intricate designs. 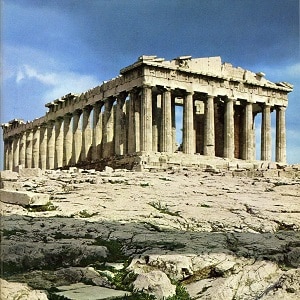 Facts about Ancient Greece tell us that they had a comparatively healthy diet with little meat, that men and women wore the same clothes and very often no footwear. Greeks prized dogs as pets. Children had tough lives and were frequently abandoned – girls would be married off very young. Finally, Ancient Greece was the birthplace of the Olympics, but the games were used to train men for war rather than being used as a simple, entertaining sporting