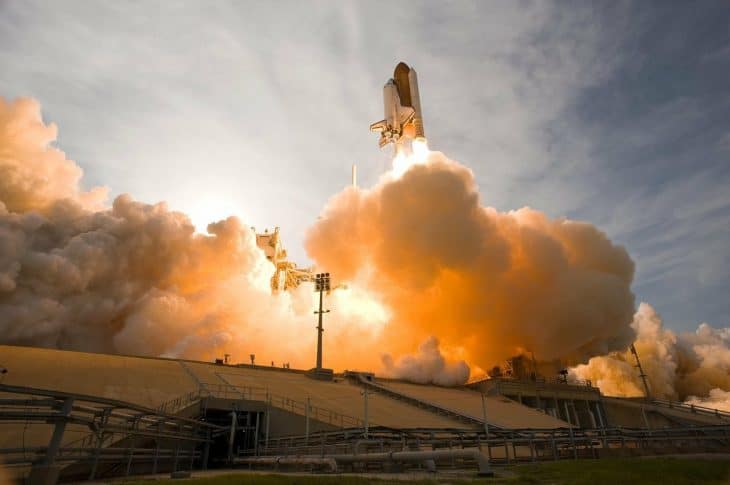 From going distances that humans can’t reach to ensuring our safety, rockets improve our lives in more ways than you might think. Sit back and count down to these rocket facts that’ll make you realize the science behind these projectiles.

Quick Facts
Essential Facts
Interesting Facts
Table of Contents
01 A rocket ship beats the vacuum of space.
02 Rockets were first used as weapons.
03 You can make a rocket at home.
04 Rocket power is measured in thrust.
05 The first rocket in space was launched by Germany in 1942.
06 The first rocket was invented in China around 1100 AD
07 The largest rocket is over 300 feet tall.
08 There is a Chinese legend about a rocket-powered chair.
09 Liquid-fuel rockets are more powerful than solid-fuel rockets...
10 ...but solid-fuel rockets are safer.
11 Rockets have been used for rescue operations.
12 Rockets launch in 3 stages.
13 Rockets are loud.
14 The Saturn V rockets were the most successful rockets ever launched.
15 Rockets have reached the farthest known place from Earth.
16 The first example of rocket science was from a wooden duck in Ancient Greece.
17 Elton John performed his hit Rocket Man at the launch of the Discovery Spacecraft.
18 There is a comic character named Rocket.
19 Huntsville, Alabama is known as Rocket City.
20 Some flares work like rockets.
21 A rocket caused the first space-related death.
22 The Space Race caused a lot of rocket explosions.
23 Rockets are extremely hot.
24 There is no margin of error for rockets.
25 Rockets help us gather data.
26 William Leitch first proposed the concept of using rockets for space.
27 The term ‘rocket’ was first used in the 17th century.
28 Rockets are sensitive.
29 Rockets are used to deliver cargo to the International Space Station.
30 SpaceX wants to colonize Mars.

A rocket ship beats the vacuum of space.

Space is a giant vacuum with no air or atmosphere. Spacecraft can move through the vacuum through its engines. Rocket engines work through a chemical reaction that pushes it forward. The resulting rocket exhaust is expelled in the opposite direction of the ship at high speeds. This enables the ship to navigate and sustain its trajectory through space. That’s definitely one of the rocket facts to keep in mind.

Rockets were first used as weapons.

During the war between the Chinese empire and Mongol invaders, the Chinese devised a gunpowder-fueled arrow. The retreating Mongols described these projectiles as “arrows of flying fire.” These fire-arrows were the first solid-propellant rockets. From there, further experiments with cased gunpowder led to the development of military rockets and missiles.

You can make a rocket at home.

Learning how to build a rocket can help you understand the science behind it better. You may not believe it, but you can build a simple rocket out of random stuff lying around your house. With paper and a fizzy tablet, you can demonstrate the mechanism and principles of a rocket.

Rocket power is measured in thrust.

Rockets are self-propelling projectiles. Using up the fuel in the body, the rocket exhaust keeps it moving in the same trajectory. The force inside a rocket’s engine is called thrust. Since rockets weigh millions of kilograms, they must exert the same amount of force to propel itself through and out of the atmosphere.

The first rocket in space was launched by Germany in 1942.

Germany launched the first rocket capable of reaching space in 1942. Dubbed the V-2 rocket, it was not actually intended for space travel. Instead, the V-2 was constructed as a ballistic missile during WWII. Nonetheless, it was revealed in a flight test to be the first man-made object to fly into space.

The first rocket was invented in China around 1100 AD

The rockets invented in the 10th century China used solid propellants and were mainly used as weapons and fireworks. It was not until the 1920s that rocket science was studied further. By the 1930s and 1940s, professional rocket engineering started to take off.

The largest rocket is over 300 feet tall.

Standing at 363 feet tall with a thrust of 7.6 million pounds, NASA’s Saturn 5 rocket is the largest one to date. The Saturn 5 was used for Lunar missions between the 1960s and early 1970s.

There is a Chinese legend about a rocket-powered chair.

With its origins tracing back to China, one of the first mentions of rockets as transportation was found in Chinese folklore. According to the legend, a Chinese official named Wan-Hu once assembled a rocket-powered flying chair. The chair had two large kites attached to either side, each equipped with 47 arrow rockets.

You can probably guess where this goes. On the scheduled takeoff, Wan Hu had his servants light the 47 fire arrows. The arrows did go off, but when the smoke cleared, Wan Hu and his chair were nowhere to be found. The gag is that if it did actually happen, he was probably just obliterated by the blast. Definitely one of the funnier rocket facts.

Solid-fuel rockets were invented first in 13th century China. However, it was liquid-fuel rockets that eventually paved the way for space travel. Liquid-fuel rockets are equipped with more reactive oxidizers, causing a stronger chemical reaction and stronger propulsion. To escape Earth’s gravity, spacecraft must travel 4.9 miles per second – which is almost the speed of the world’s fastest production sports car.

...but solid-fuel rockets are safer.

Rockets have been used for rescue operations.

Aside from military ammo and space travel, rockets also serve a purpose in safety and rescue. In the 19th and 20th centuries, rockets were used to launch lines to damaged ships that can’t be reached. From these lines, a buoy was sent through for passengers to grasp and escape with. Ships even used to have a designated rocket brigade, or a group of responders who would fire the rockets.

Rockets aren’t one solid hunk of metal. If you’ve ever seen a rocket in space on cartoons or TV shows, you’d notice how it breaks apart. Essentially, a rocket breaks off into sections while in flight. The first stage of a rocket launch is ignition. From takeoff, the burning rocket exhaust will push the rocket forward. Once the fuel runs out, the section will break off. From there, the second stage fuel reserve will be used until the payload reaches orbit.

Rocket sound is so loud, it can destroy the rocket. When a space rocket is launched, acoustic waves can generate up to 180db of sound – which is almost as loud as a nuclear explosion. To avoid this, a sound suppressor system is built into the launch pad. The system uses water to absorb the sound waves from the rocket as it launches.

The Saturn V rockets were the most successful rockets ever launched.

Not only is it the biggest rocket, but it is also the most successful one with 13 completed launches. Currently, at least two Saturn V stages from the Apollo missions are still in space. NASA is still tracking them as Near-Earth Objects. How’s that for amazing rocket facts?

Rockets have reached the farthest known place from Earth.

As of 2018, Voyager 1 and 2 are 13 billion miles (21 billion km) away from Earth. They twin rockets are now the most distant human made objects from the planet. The satellites reached a previously unseen region of space known as the heliosheath in early 2009. Currently, they are heading for the heliopause, which is technically the end of the solar system.

The first example of rocket science was from a wooden duck in Ancient Greece.

It wasn’t exactly a rocket, but it was the first known experiment to demonstrate the principles of rocket science. According to Ancient Greek literature, a man named Archytas flew a wooden pigeon through a line using a steam exhaust.

Elton John performed his hit Rocket Man at the launch of the Discovery Spacecraft.

The legendary musician played the aptly-named hit track at the Space Shuttle Discovery launch site in 1998.

There is a comic character named Rocket.

Guardians of the Galaxy’s resident raccoon was apparently inspired by The Beatles’ track, Rocky Raccoon. How’s that for rocket facts?

The U.S. town of Huntsville, Alabama is called Rocket City because it basically started America’s legacy with space travel. The rockets that launched the Lunar missions were all constructed in Huntsville. NASA’s Space Camp was also founded and currently based in Huntsville.

Rockets can also serve as distress signals. In fact, most modern flares use rocket mechanisms. Rocket flares use a trigger and launching system similar to spacecraft and missiles.

The first space-related fatality occurred when a rocket exploded at the Soviet Union’s Baikonur Space Center in Kazakhstan. The explosion killed 165 people, including the head of Soviet rocket forces. The accident was denied until 1990.

The Space Race caused a lot of rocket explosions.

The Space Race was a period in the 1960’s where the Soviet Union and the U.S. competed in space travel. At a time where rocket engineering wasn’t fully understood yet, numerous flight tests ended up in flames.

When a rocket is active, temperatures in the main engine combustion chamber can reach 3,315.6°C.

There is no margin of error for rockets.

One of the important rocket facts to note: The tragic explosion of the Space Shuttle Challenger killed 7 crew members. Upon inspection, the sudden explosion was triggered by faulty O-rings in the shuttle’s right solid rocket booster.

Sounding rockets are sent to space carrying instruments that take readings from 50 kilometers (31 mi) to 1,500 kilometers (930 mi) above the Earth’s surface. We owe most of what we know about space to these rockets.

In his 1861 essay, A Journey Through Space, Leitch first wrote about rocket-fuelled space flight.

The term ‘rocket’ was first used in the 17th century.

The term originated from the Italian rocchetto (a rocket) in 1610. However, the term rocket ship was not used until 1927.

One of the scarier rocket facts: Even a minor error can end catastrophically for rockets and the crew aboard it. There has been one case of a Soyuz rocket suddenly having an emergency landing. Thankfully, the crew was unharmed. However, an investigation revealed a faulty sensor that was damaged during assembly.

Rockets are used to deliver cargo to the International Space Station.

There’s definitely no FedEx in space, so NASA has to use rockets to send supplies to its home base. However, the rise of 3D printing technology now offers a cheaper and more efficient alternative.

The brainchild of Elon Musk, Space Exploration Technologies Corp. seeks to discover and reach life on Mars as soon as possible – through rockets, of course. However, SpaceX also delivers cargo to the ISS. Isn’t that one of the rocket facts to look forward to?