Most Tsunamis Occur in the Pacific Ocean

Tsunami facts show that nearly 80% of the world’s tsunamis take place in the Pacific Ocean, most specifically in the “Ring of Fire”. This is the name given to a horse-shoe shaped path that begins in New Zealand and includes Indonesia, Papau New Guinea, Indonesia, the Asian coastline and ends along the western North American coastline. Tsunamis have occurred in every ocean in the world, though.

The Biggest Tsunami in History Occurred In Alaska

A tsunami caused by an earthquake hit the southwest shoreline of Gilbert Inlet in Alaska on July 9 1958. The waves reached as high as 1,720 feet, making them the highest ever recorded. The event had a miraculously low death toll of 5 people. The deadliest tsunami on record is the Indian Ocean tsunami of 2004. Almost 230,000 people were killed in 11 different countries as a result. In the last 2,000 years, nearly half a million people have been killed by tsunamis. Therefore, nearly half of all deaths were caused by just one tsunami, demonstrating just how large and powerful this particular tsunami was.

Waves normally break and curl as they head towards shore. A tsunami wave will not do this, and will instead hit the shore rapidly. It may also come in the form of a bore, which can be described as a wall of water. This is thought to be part of the reason people remain on shore rather than seeking safety. The wave is unique and can mesmerize bystanders.

Many survivors of tsunamis report that in the hours before the disaster, animals were seen heading towards higher ground away from the coastline. Relatively few animals die during tsunamis. It is suspected that fish can predict tsunamis as well, and swim to safety. Similar reports exist for other episodes of intense weather, like thunderstorms and tornadoes.

Tsunami facts show that one of the reasons so many people are killed is because of the assumption that the tsunami is over after a wave hits. There are usually several waves, and the first is almost never the strongest. The successive waves are usually the most dangerous, and catch people who are unfamiliar with tsunamis off guard.

The most common cause of a tsunami is an underwater earthquake. The sudden shift in the Earth’s plates displaces a large amount of water, which then becomes a tsunami, powered by the force of its displacement. Other causes are underwater landslides, volcanic eruptions or, in extremely rare cases, a large meteorite strike.

Not All Tsunamis Are Dangerous

Many small-scale tsunamis take place all over the world, and most go unnoticed by people nearby. A tsunami can be fewer than 12 inches in height, and may appear as a normal wave.

Tsunami Is a Japanese Word

Tsunami can be translated in Japanese as harbor wave, which effectively describes the nature of the natural phenomenon. Japan is the country that sees the most tsunamis each year on average.

Not only do tsunamis cause destruction to buildings, but the sheer speed of the flowing water can rip trees out of the ground. The saltwater of the ocean also leaves salt in the soil that can damage crops and prevent future farming.

Swimming Will Not Help You Survive a Tsunami

The best way to survive a tsunami is to know the signs that one may be approaching, such as an earthquake or receding water levels, and get to higher ground. If you are caught by surprise in a tsunami, do not try to swim to land. Instead, find something that floats and ride the current of the wave. Do your best to avoid debris but, more importantly, stay above water.

Tsunamis Could Explain Some Ancient Legends

Some geologists believe that tsunamis could be the explanation for many biblical and legend-based stories, such as the great biblical flood, the parting of the Red Sea when the Israelites left Egypt, and also the destruction of the Minoan civilization, whose ending is a mystery to historians.

The average ocean wave generated by wind usually does not exceed 60 miles per hour. The water of a tsunami, however, can reach speeds as high as 600 miles an hour, similar to the speed of a jet plane. Tsunamis do not lose much of this speed as they travel.

Tsunamis Can Be Predicted

Hawaii Is the State with the Highest Tsunami Risk

Of all the states that can be hit with tsunamis, Hawaii has the highest risk. On average, the state has one incident every year, with a severe storm hitting every seven years. The largest tsunami documented was in 1946. It hit the Hilo Island coast, with 30-feet waves traveling at nearly 500 miles an hour. Other states at risk include Washington, Oregon and California.

The Pacific Tsunami Warning System is headquartered in Hawaii. 26 nations are involved and maintain seismic equipment and water level gauges to identify tsunamis and warn people if necessary. This isn’t the only location with this type of system. More areas are taking the same defense against tsunamis. 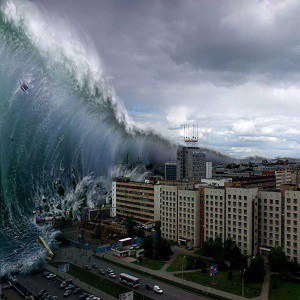 Tsunami facts demonstrate how these sometimes monstrous natural disasters take lives, destroy landscapes and continue to threaten coastal populations. Their sheer power is exposed, and survival advice is noted. Though tsunamis are not preventable, effective warning systems can help save lives.