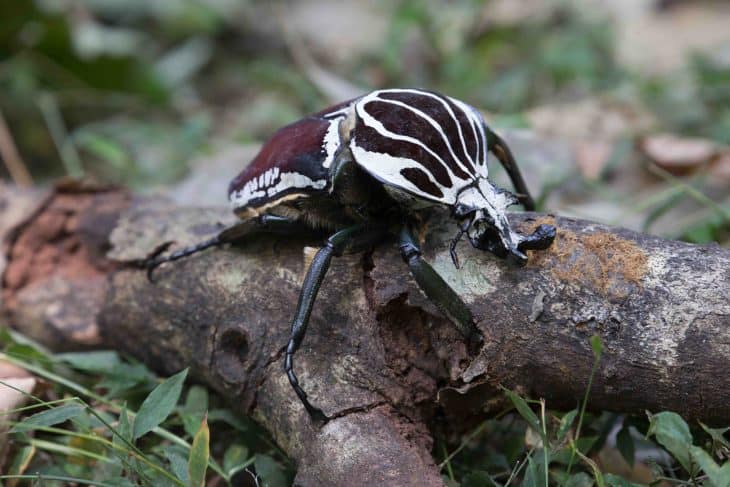 The Goliath beetle is one of the largest insects, not just in Africa but on the entire planet. Their size is comparable to a human hand. Not only that, they also have vivid colors and unusual designs on their back. These patterns are so unique, they’ve been compared to everything from a skeleton to a bunch of children’s drawings. You’ll easily spot them in a crowd. Surprised by that bit of info? Then, you better hold on tight because we’ve got more Goliath beetle facts just for you!

Goliath beetles aren’t just big, they are also strong. They can carry as much as 800 times their weight. These beetles are ferocious as well. Male beetles compete for food and mates by locking their horns in a sort of “dominance battle.” May the best beetle win! Moreover, if another beetle trespasses on their territory, it can become quite territorial. It’s worth noting, though, that this behavior is exclusive to other beetles. Except for the rare pinch from their mandibles, Goliaths aren’t deadly to humans.

Wondering where the name Goliath came from? The origins of the name can be traced back to the Bible. The beetle is named after the giant Goliath from the story of David and Goliath. It definitely lives up to its name!

Interested in learning more about the Goliath beetle? You’ve come to the right place, then! Check out our Goliath beetle facts list below. We discuss details about their five species, as well as information on their diets, habitats, and a whole lot more!

Goliathus cacicus is a species of Goliath beetle.

Goliathus cacicus is a species of Goliath beetle that lives in Nigeria, Liberia, Ghana, Guinea, Sierra Leone, and the Ivory Coast. They are also known for their bright colors; yellow, amber, and orange. Moreover, their backs are all white instead of the common black stripes.

Goliath beetles eat foods that are high in sugar.

Adult Goliath beetles feed on food with high sugar content like tree sap and rotten fruits. They also eat other plants, dung and animal remains. By doing this they are helping the ecosystem, this action lessens the number of decaying animals and plants in the environment.

The Royal Goliath beetle is the largest species of Goliath beetle. They can grow up to 3 to 4 inches (7.62-10.16 centimeters) in length or just about the size of a human hand. Although they also have black and white marks, they can easily be distinguished from the other species by the black bands on each side of their backs.

Goliath beetles go through four stages of metamorphosis: egg, larva, pupa, and adult insect. The female Goliath beetles lay around 30 to 50 eggs underground or in a pile of wet leaves. It will take around two weeks for the eggs to hatch.

Goliath beetles are heaviest during the larvae stage.

The larva will emerge from the eggs and will stay underground for about four months. It takes months to fully mature because of the size they need to achieve. During this stage, they grow up to 250 millimeters or (9.8 inches in length and weigh 100 grams or 3.5 ounces. They will make a cocoon-like shell as they go to the pupal stage.

Goliath beetles shed their skin during the pupal stage.

During this stage, Goliath beetles reduce their size and shed skin. They remain motionless as their tissues break down and restructure. Moreover, their exoskeleton will start to form, and their wings will grow.

An adult Goliath beetle appears during the rainy season.

The end of the dry season marks the end of the Goliath beetle’s metamorphosis. The rain will drip into the soil and will dissolve the hard shell of the cocoon, and they will emerge as an adult beetle. Then, they will look for a mate and the entire life cycle will begin over again.

Goliathus goliatus is a species that has a red back.

Goliathus goliatus is a species of Goliath beetle that lives in Congo, Cameroon, Kenya, Gabon, Nigeria, Tanzania, Uganda, and Central African Republic. The male measures 50 to 100 millimeters or 1.9 to 3.93 inches, while the female is 50 to 80 millimeters or  1.9 to 3.14 inches. Furthermore, they are the only species of Goliath beetles that have reddish coloring on their back, making them popular to breeders and collectors.

In the wild, male Goliath beetles often fight with one another using their Y-shaped horns. Moreover, males establish their territory and tend to be aggressive when other males or rivals get into their range. They also sense if females move to their territory through pheromonal signals or communication between members of the same species.

Goliathus atlas is a rare species of Goliath beetle.

Goliathus atlas commonly lives in Burkina Faso and Ivory Coast in West Africa. It measures around 50 to 100 millimeters or 1.9 to 3.93 inches. It is a rare type of Goliath beetle and is believed to be a hybrid between Goliath regius and Goliath cacicus.

Goliathus albosignatus is found in Mozambique, South Africa, Tanzania, and Zimbabwe. Males can grow from 45 up to 70 millimeters or 1.7 to 2.7 inches while females measure from 40 to 50 millimeters or 1.57 to 1.96 inches. They have black and white patterns on their backs and abdomen that resemble a skeleton.

Just like other beetles, the Goliath beetle has elytra, the forewings or outer wings. This protects the hindwings or the softer pair of wings and abdomen. When they are not flying and hindwings are not in use, they are folded beneath the elytra.

Goliath beetles use their jaws to break fruits.

Goliath beetles use their sharp, claw-like jaws to break tree barks and fruit. They also have wooly areas in the mouths which resemble a paintbrush. These have hundreds of small pieces of fiber which they use to sip the juice of foods.

In captivity, pellets like dog food or cat food may be a suitable diet for Goliath beetle larvae. However, pet owners should also provide decayed leaves and pieces of wood. Moreover, the Goliath beetle under captive conditions also lives for around a year from the pupal stage. The life span in the wild is shorter due to some factors like predators and weather.

Lizards and birds are the predators of Goliath beetles.

Some of the strongest predators of Goliath beetles are lizards, birds, frogs, rodents, and other mammals. The larvae stage is the most vulnerable to predators. At this stage they are still in worm form, so they do not have a natural defense against attackers.

Goliath beetles produce humming or buzzing sounds which are very audible. Along with these, they move their wings really fast, creating a sound similar to a helicopter when they fly. Their sound can help you easily locate them when you want to spot a Goliath beetle.

The first Goliath beetle was found in 1766.

Goliath beetles use their sharp claws to climb trees.

Goliath beetles are sprightly climbers. They use their forked and sharp claws to climb branches, trees, and vines. Although they are too heavy to perch on leaves, goliath beetles are just like ground beetles, they climb trees to search for food.

Goliath beetles have a keen sense of smell and eyesight which they use to detect predators. Just like other insects, they have compound eyes in front of their heads and antennae to sense their surroundings.

Goliath beetles are not endangered.

Even though the International Union for Conservation of Nature (IUCN) has not evaluated all the species of Goliath beetle, they are unlikely to get endangered because they have a wide range of habitat in Africa. However, their removal from the wild for the pet trade is the primary threat to Goliath beetles.