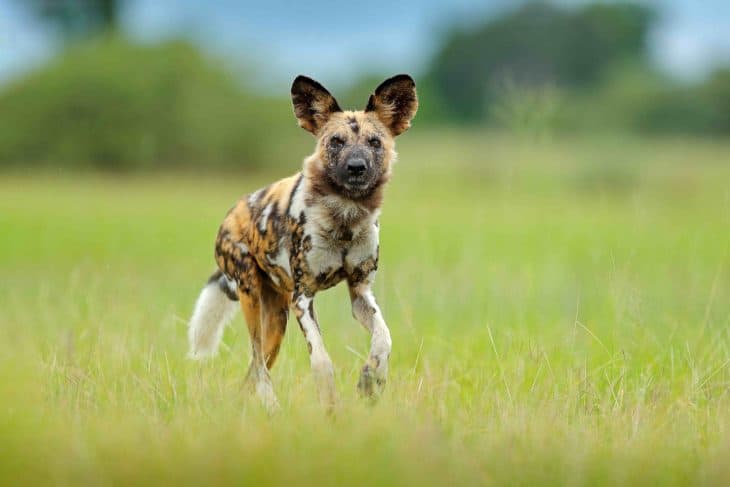 The African wild dog is one of the world’s most endangered animals on our planet. They distinguish themselves with their long legs and irregular fur patterns. In the wild, they live in packs and are remarkably social, helping each member of the pack when weak or sick. When hunting food, they can go up to 20 members working together. Unfortunately, African wild dogs are gravely endangered due to ongoing habitat fragmentation, conflict with human activities, infectious disease, and are mostly overpowered by the lions. But what is so fascinating about this creature is that they fully help each other out whether it’s in the form of sharing food, or sometimes, even risking their own lives to help and defend their pack against predators. Learn more about this selfless animal with these 30 African wild dog facts.

Quick Facts
Essential Facts
Interesting Facts
Table of Contents
01They can be a little bigger than German Shepherds.
02They can run extremely fast.
03It’s not good to make them as pets.
04There was a tragedy in Pittsburgh Zoo involving African wild dogs.
05African wild dogs have rounded ears.
06African wild dogs perform an important role in the ecosystem.
07They have several English names.
08They can have a litter of 2 to 20 pups.
09Lions are its primary predator.
10They can take down a wounded or old lion.

They can be a little bigger than German Shepherds.

One fascinating example of African wild dog facts is that although they may look small, these creatures can actually be a little bit bigger than German Shepherds. The African wild dog is approximately 75 to 100 cm (29–39 inches) long, exclusive of its 31–41-cm tail and stands around 60 cm (24 inches) tall at the shoulder, and typically weighs about 16–23 kg (33–50 pounds).

They can run extremely fast.

The African wild dog is an opportunistic predator. When hunting their prey (antelopes for instance), they will chase them to exhaustion. They can run more than 70 km/h or about the average speed of a cruising car and they are specialized diurnal hunters which means they hunt during day time.

It’s not good to make them as pets.

Even though they belong to the Canidae family, African wild dogs are neither wolves nor dogs, but they have a “similarity” with wolves—it’s not a good idea to turn them into pets. African wild dogs simply like to stay as far away from humans as possible. In general, they don’t attack livestock unless there’s a shortage of their common prey.

Read also: 50 Unbelievable Cow Facts You Have To Know

There was a tragedy in Pittsburgh Zoo involving African wild dogs.

In the wild, indigenous people are not scared of the African wild dog, and there have been no reported instances of wild dog attacks on people (although they could fight back as an act of self-defense). In 2012, at the Pittsburgh Zoo, African wild dogs killed a 2-year-old boy after falling into their enclosure, however, they did not make an attempt to eat the boy.

Their rounded ears serve them 2 different purposes: the first is for hunting (they have excellent hearing skills) and the second is for cooling, suitable for the hot African climate (air moves over the blood vessels in their ears and carries heat away).

African wild dogs perform an important role in the ecosystem.

Similar to most predators, the African wild dogs perform an important role in the ecosystem by eliminating unhealthy and weaker animals, thereby helping to preserve the natural balance and improve prey species. Moreover, when it comes to drinking, they can survive without water for long intervals, as long as the food eaten is relatively moist. And although they are diurnal, they can also hunt or travel during the night, if necessary.

They have several English names.

Generally, a monogamous breeding pair dominate the African wild dogs, and the female can have a litter of about 2 to 20 pups. And because they are extremely social, the entire pack can take care of these pups. Based on the observations in the wild, they can share food and even assist vulnerable members. Furthermore, they can communicate by actions, touch, and vocalizations.

Lions are its primary predator.

They can take down a wounded or old lion.

On some occasions, African wild dogs have fought and seen to successfully defend their pack and even prey against an old or injured lion. A recorded incident happened where a pack of African wild dogs successfully prevented a lion from killing one of them. They forced the lion to retreat, and the surviving wild dog rejoined the pack.