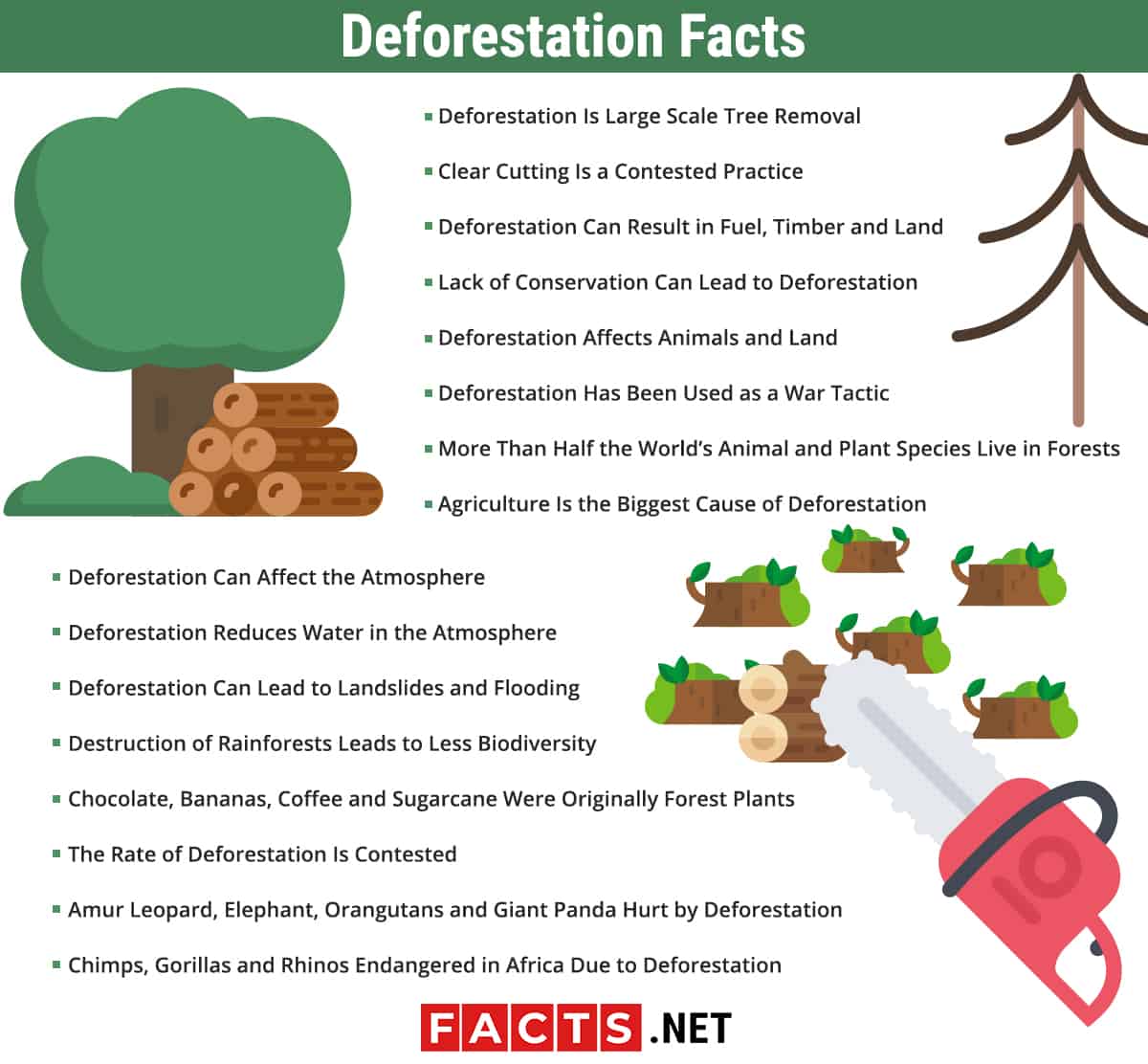 Deforestation occurs when forest or trees are removed and land is re-appropriated for non-forest use. For example, if a developer decides to build a hotel and needs to chop down part of a forest for the land, he has practiced deforestation. In the past, forests have been cleared for many reasons, including farming and home building.

Clear Cutting Is a Contested Practice

Clear cutting is when part of a forest is cut down, generally to help certain wildlife prosper or to support a certain type of ecosystem. It is sometimes seen as controversial because while opponents see it as different from deforestation, those who practice it do not.

Deforestation Can Result in Fuel, Timber and Land

Deforestation facts show that trees are sometimes cut down to be made into fuel or to be used as timber. Sometimes deforestation occurs so that land can be used as a pasture or a farm. In urban and suburban areas, trees may be removed to allow for more housing and shopping centers.

Lack of Conservation Can Lead to Deforestation

When governments don’t actively create and enforce laws to curb deforestation, it can go unchecked as people attempt to make money by developing land or selling timber for building or fuel. Some governments take an active role in curbing deforestation by enforcing limits and protecting forests and green spaces.

Deforestation negatively affects ecosystems and the environment. Deforestation facts indicate that not only are trees a great source of oxygen, but they are also home to many creatures. The destruction of forests can lead to land erosion and destroys habitats.

Deforestation Has Been Used as a War Tactic

Agent Orange is a defoliant and herbicide that has been used in at least two wars. The British first used Agent Orange to clear trees so insurgents couldn’t hide behind them. They also killed crops to decrease their enemies’ food supply. The United States, who helped develop and test different herbicides and defoliants with the British, later used Agent Orange in Vietnam.

Tropical forests are home to more than half of all plant and land animal species. Scientists have long wondered why the rainforests have allowed for so much biodiversity. Jaguars, monkeys, platypi and tigers all call the rainforest home. They are joined by numerous other mammals, insects, reptiles, birds and amphibians that have all adapted to their unique habitats.

Agriculture Is the Biggest Cause of Deforestation

Deforestation Can Affect the Atmosphere

Deforestation Reduces Water in the Atmosphere

It may be surprising to hear, but deforestation also affects the water cycle. Trees take up water from the ground through their roots. This water works up through the trunk and the leaves and is released into the atmosphere. The destruction of forests results in drier climates because the trees no longer pull the groundwater up out of the soil, leaving the soil and the atmosphere drier.

Deforestation Can Lead to Landslides and Flooding

Because of the way deforestation affects the water cycle, it can also impact the future growth of trees. Deforestation facts show that drier soil will not be as kind to new plants. It will erode more easily and be more prone to flooding and landslides. With fewer forests, the land does not retain moisture in the same way.

The rainforest biome contains approximately 80% of the world’s known biodiversity. Numerous species call it home, and many of these can only be found within its leafy shelter. Unfortunately, due to high levels of deforestation more of these species face the possibility of extinction.

Forests have provided some well known staples that we now cultivate and farm. Chocolate, bananas, coffee and sugarcane all originally grew naturally in forests. Now they are generally grown on farms. Imagine if deforestation had destroyed these plants that have now become staples in our diets!

The Rate of Deforestation Is Contested

Deforestation in Asia has led to less biodiversity and shrinking habitats for some beautiful creatures. The Amur leopard, the Asian elephant, orangutans, and giant pandas, among others, have all been endangered by losing their homes. Conservation efforts are in place to help these species get back on track, but the outlook is not always hopeful.

Chimps, Gorillas and Rhinos Endangered in Africa Due to Deforestation

The destruction of African forests has altered the climate and landscape of several countries on the continent. It has also inexorably altered the lives of many mammals. Chimpanzees, gorillas and rhinos have not just lost the trees they called home or used for shelter, but have also lost the luscious plants and soil that accompanied them. 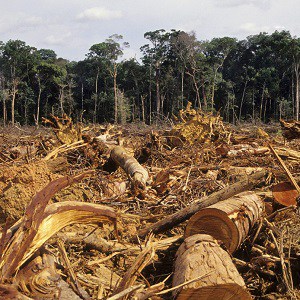 Deforestation is the removal of trees in order to repurpose land. Agriculture accounts for up to 80% of deforestation as forests are cleared in order to provide pasture for grazing animals or to plant other crops. Deforestation destroys the water cycle and can lead to drier land. It increases the possibility of landslides and flooding and destroys the habits of many animals and plants. Deforestation has led to many species being placed on the endangered animals list, including pandas, gorillas, orangutans, Asian elephants, and rhinos. Reforestation, sustainable forests, and forest conservation are possible solutions to this environmental dilemma.