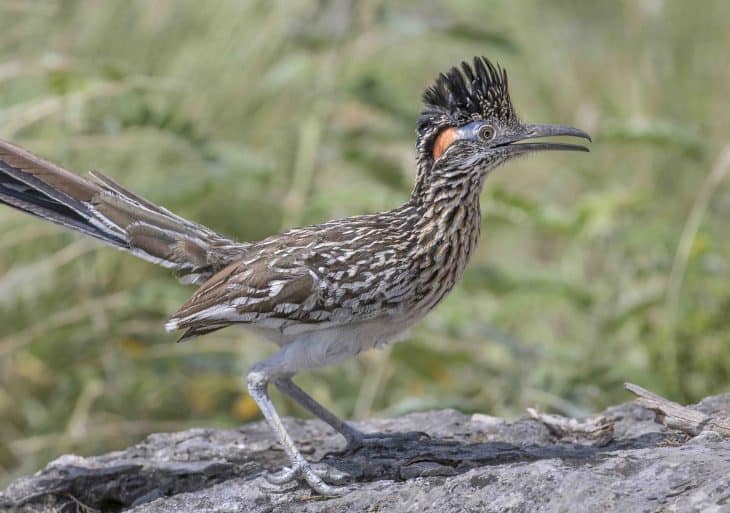 Roadrunners are big, black-brown birds with long legs and a prominent head crest. They can fly really fast and have impressive running ability. Roadrunners are members of the cuckoo bird family. However, while they look nothing like their cuckoo relatives, their call sounds like a “coo.” Almost all roadrunner bird facts guides report that these creatures are primarily terrestrial. This is true. But they can also fly, too!

They fly in quick and short spurts, their exceptional sprinting skills allow them to lift off the ground. While roadrunners are fast for birds, they are not quite as fast as coyotes, contrary to what you see in those Looney Tunes cartoons. A roadrunner’s land speed is normally around 15 miles per hour, yet the bird may move considerably faster in brief bursts. That’s a lot of speed for a two-foot-long bird!

Roadrunners are usually spotted ambling along seeking prey, but when they spot a fast-moving animal, they become frantic, which is what you see in the cartoons. Don’t think they are harmless, they are also famous as opportunistic predators as they sometimes grab birds from bird feeders. When a roadrunner sees what she or he wants, they will go for it! Find out more about these birds with these roadrunner bird facts!

Table of Contents
01 Roadrunners eat a variety of food.
02 Roadrunners produce a 'coo' sound.
03 Roadrunners lower their body temperature to conserve energy.
04 Roadrunners are monogamous.
05 A Greater roadrunner is clumsy in flight and tires quickly.
06 Lesser roadrunner inhabits Mexico and Central America.
07 Both male and female roadrunner incubate their eggs.
08 Roadrunners stay hydrated by getting fluid from their prey.
09 Native American tribes believe that the roadrunner can drive away evil spirits.
10 The Looney Tunes cartoon character Road Runner is famous for its beep, beep sound.

Roadrunners eat a variety of food.

Roadrunners consume a variety of food, they feed on almost anything such as insects, small mammals, fruits, seeds, and prickly pear. Moreover, they can eat lizards, snakes, scorpions, rattlesnakes, and spiders. Roadrunners sometimes jump into the air to catch hummingbirds.

While courting the female roadrunner and when protecting their territories, the male roadrunner produces a “coo,” sound just like a dove. Both male and female roadrunners sometimes bark and growl to communicate. They also make clatter or clicking sounds when they snap their beaks. They use the click sound to tell other roadrunners of their location.

When the desert temperature drops in the nighttime, roadrunners lower their body temperature and get into a torpor condition, a state of physical or mental inactivity to preserve their energy. During the day, roadrunners expose the skin on their back to the sun to warm their body after a cold night.

Here are some romantic roadrunner bird facts. Roadrunners mate for life. and restore bonds each spring with mating calls, chasing, and sharing of food. During the breeding season, male roadrunners bring nesting material like twigs, leaves, grass, snakeskin, and pieces of manure to their partners, and the female will construct the wide nest.

A Greater roadrunner is clumsy in flight and tires quickly.

Greater roadrunner or Geococcyx californianus is a species of a roadrunner that inhabits the deserts of Mexico and the southwestern United States. It measures around 56 centimeters or 22 inches long, and has olive-green stripes. Greater roadrunners have white feathers, and a short, bushy crest. Behind their eyes are blue and red skin. These species are gawky when in flight, and get tired easily.

Both male and female roadrunner incubate their eggs.

Roadrunners stay hydrated by getting fluid from their prey.

Roadrunners’ features help them adapt to the environment. They obtain fluid from the food they consume through their digestive system. Roadrunners also have salt glands near their eyes which they use to release excess salt found in their protein-rich diet.

Native American tribes believe that the roadrunner can drive away evil spirits.

The Hopi (Native American tribe from Arizona) and Pueblo (a native tribe from the southwestern United States) believe that the roadrunner can drive away evil spirits. The Pueblo tribes also consider the X-shaped footprints of roadrunner to be sacred symbols that secure them from bad spirits. Likewise, they also use the feathers of roadrunners as decorations to cradles and “protection” for their babies.

Road Runner is a Looney Tunes cartoon character and was created in 1948. They created Road Runner as a slender, quick, blue-and purple bird who always outwits a coyote named Wile E. Coyote. For most of its episodes, Road Runner usually runs off by making a Beep! Beep! sound, and would often play tricks with Coyote.