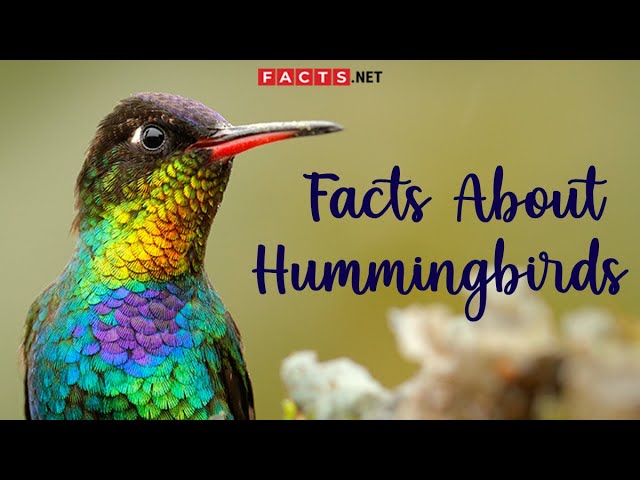 Hummingbirds are more than just the smallest birds in the world. They play a crucial role in the environment as pollinators. Aside from being nature‘s little helpers, how much do we know about them? Find out more about these tiny creatures with these hummingbird facts.

In flight, hummingbirds have an average heart rate of 1200 bpm.

Aside from their size, one of the hummingbird’s most distinct traits is its crazy heartbeat. The birds’ tiny hearts pump up to 1200 beats per minute when they’re flying around. However, their resting heart rate settles into 250 beats per minute – but it’s still much higher than the human average of only 80-100 bpm.

There are 6 common species of hummingbirds.

The ruby-throated hummingbirds are a solitary species.

During the summer, the ruby-throated hummingbird migrates to Northeast America then travelling to Central America, Mexico, and Florida in the winter season. The ruby-throated grows 2.8″-3.5″ long with a 3.1″-4.3″ wingspan. These birds are known as solitary hummingbirds with minimal social skills.

The black chinned hummingbird is one of the smallest species.

Rufous hummingbirds can fly over 3,000 km.

Rufous hummingbirds may be small, but their flying skills are larger than life. These birds can fly over 3,200 kilometers during their migratory transits. Rufous hummingbirds mostly stay in the western half of the United States, from Alaska to the south to Mexico depending on the season and migration period.

The Calliope hummingbird is the smallest bird in the U.S.

Aside from its bright magenta feathers, the Calliope hummingbird is known as the smallest bird in the United States. These birds are also widespread in Canada and Mexico.

Read also: 120 Surprising Lobster Facts That You Never Knew About

The bee hummingbird is the smallest bird in the world.

The biggest hummingbird is the Patagona Gigas.

Also known as the giant hummingbird, the Patagona Gigas towers over its species. It can weigh up to 24 grams and reach a wingspan of 8″. However, this comes at a price: the Patagona Gigas’ average flight speed is 15 wing beats per second, which is slow for a hummingbird. It has a similar diet to other birds in its family.

Hummingbirds can migrate regardless if it's night or day.

Generally, hummingbirds eat plenty in the morning. However, in places with artificial light such as porch lights, hummingbirds may eat hunt and eat during night time, especially during warmer seasons. When it comes to migration, hummingbirds can fly regardless of time.

Hummingbirds have a hibernation-like mode.

As soon as the hummingbirds fall asleep, they go into a hibernation-like mode called torpor. This state allows the birds to have a deep sleep, which enables them to slow down their metabolism to one-fifteenth of its normal state. Their heart rate can drop around 50 beats per minute, slowing down their breathing. As a result, they can save up to 60% of their energy in this state.

Some hummingbird species prefer not to migrate.

For unknown reasons, some hummingbirds would stay in their place and prefer not to migrate during the winter season. One theory suggests that due to its ability to hibernate, several hummingbirds can survive even without migration. For instance, some of Anna’s Hummingbird species do not migrate anymore, staying on the northwestern coast of the United States and some other parts of Canada all year long.

Hummingbirds can look like a dead bird while in Torpor state.

When hummingbirds go into a state of torpor, they hang themselves upside-down. To an observer, a sleeping hummingbird can look like dead bird – even if someone touches them, it’s unlikely for them to wake up. On average, it takes around 20 minutes to 1 hour for a hummingbird to awaken from the Torpor state.

Hummingbirds will eat 25% of their daily intake after the Torpor state.

As soon as hummingbirds wake up from their torpor state, the first thing they will do is to look for food. They will consume over 25% of their daily consumption intake to restore energy and stack up nutrients.

Aside from the fact that the hummingbirds are the world’s smallest warm-blooded animals, they lack the insulating feathers commonly found in birds. Hummingbirds have a unique way of conserving enough energy to endure cold nights by reducing their internal thermostat at night.

The rufous hummingbird is the longest migrating hummingbird species. These hummingbirds can fly close to 5,000 kilometers from their nesting grounds in Canada and Alaska to their “winter home” in Mexico.

Hummingbirds are also known as "the flying jewels".

Most bird species have around 1,500-25,000  feathers. However, hummingbirds have less than 1,000 feathers. They are known as “the flying jewels” because they can change their feather colors in flight.

Hummingbirds can recognize flowers they have already visited.

Hummingbirds are one of the most intelligent birds. Compared to their body mass, they have a large brain, weighing around 4.2% of the hummingbird total body weight. Because of this, hummingbirds can tell apart fresh flowers from the ones they have already visited. They can also determine when a flower will refill its nectar.

Hummingbirds consume nectar for the carbohydrates in its sugar which is their primary source of energy. Since flower nectar is the best source of sugar, the birds consume five to eight doses of it per hour. In one day, a hummingbird visits more than 1,000 flowers to complete their daily nectar fix.