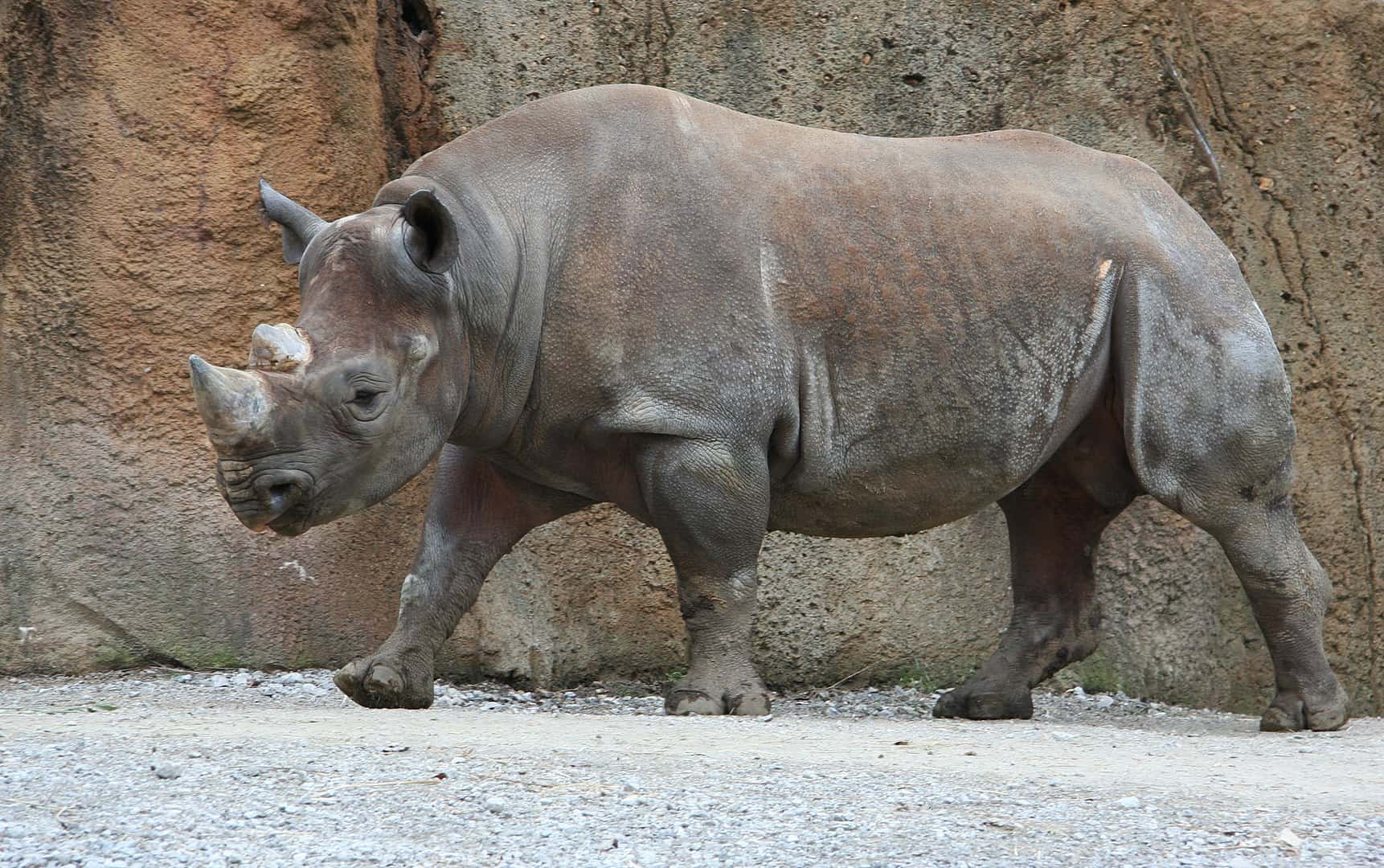 Rhinos are among the first animals any of us are taught about when we were children. Aside from having horns, how much do we really know about these animals?  Take a closer look at one of the most unique-looking members of the animal kingdom with these rhino facts.

Quick Facts
Essential Facts
Interesting Facts
Table of Contents
01 Rhino Facts Infographics
02 The White Rhino has two subspecies.
03 White rhinos and black rhinos are the same color.
04 The Indian Rhino is the second-largest land animal in Asia.
05 The Javan Rhino was once the most common of all rhinos.
06 The Sumatran Rhino is the smallest rhino of them all.
07 Rhinos have no natural predators in the wild.
08 Rhino horns are prized by hunters.
09 The trade of rhino horns and other body parts is illegal.
10 Activists proposed poisoning rhino horns to deter poachers.
11 Some propose producing synthetic substitutes for rhino horn. 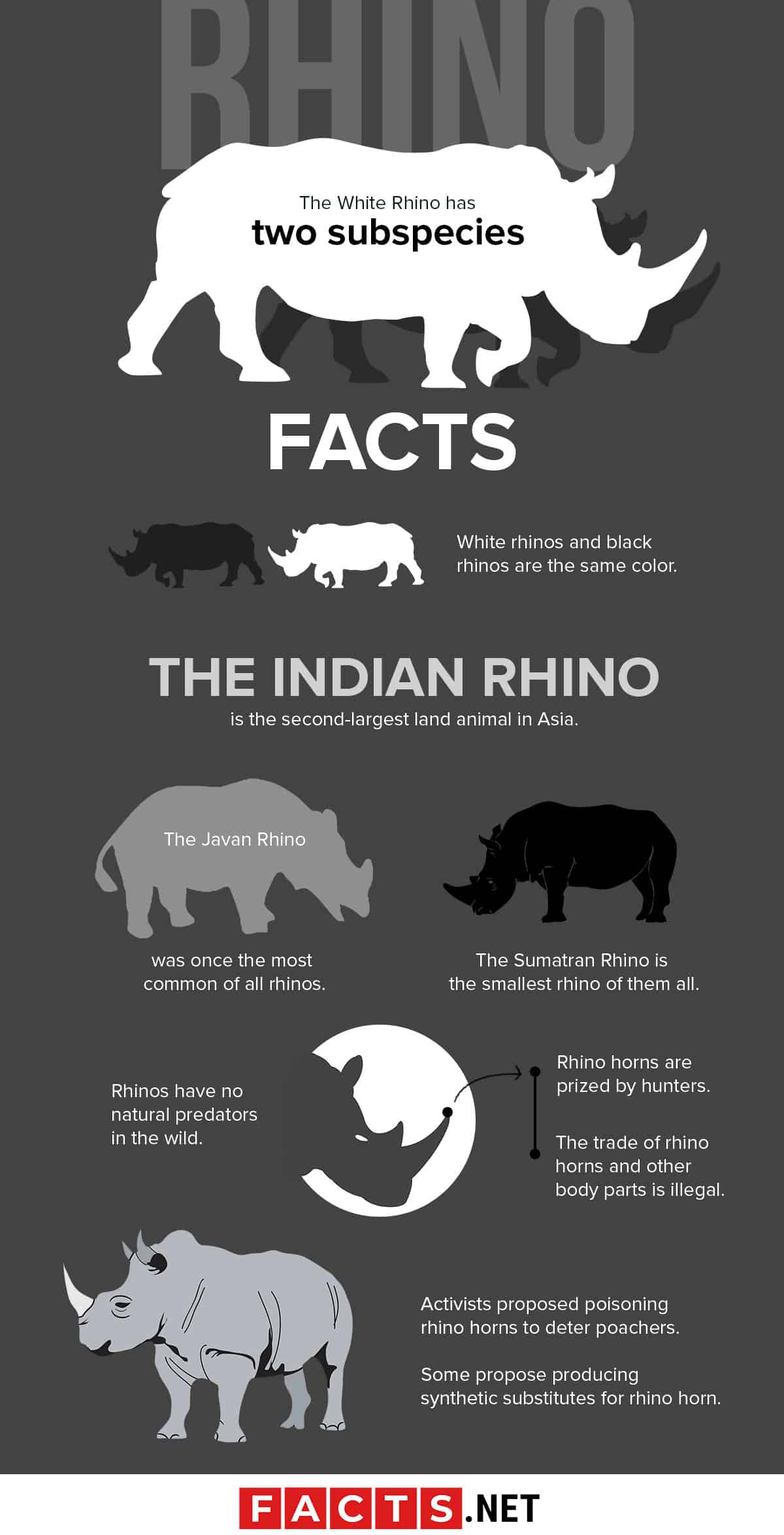 The White Rhino has two subspecies.

White rhinos and black rhinos are the same color.

The Indian Rhino is the second-largest land animal in Asia.

Only the Asian elephant is larger, in fact, with Indian Rhinos growing to 6 ft high and 12 ft long. On average, they weigh around 2,200 kg. Indian rhinos don’t have a horn until they reach around 6 years of age, where it starts growing up to 10 inches long. Some specimens grow even longer at up to 14 inches in length.

The Javan Rhino was once the most common of all rhinos.

In the past, Javan Rhinos lived not only in Indonesia, or even Southeast Asia, but spread into China and even into India. Today, poaching and the destruction of their habitats reduced their numbers to only 58 to 68 animals on the Indonesian island of Java. To respect the animals’ solitude, scientists today limit themselves to video footage and fecal samples to study the Javan Rhino.While there is the hope of the species recovering in the future, the small remaining population has scientists worrying about the possibility of excessive inbreeding among the Javan rhinos.

The Sumatran Rhino is the smallest rhino of them all.

Despite being the smallest rhino species, they’re still big animals at 4 ft tall and 11 ft long, weighing 800 kg on average. Sumatran rhinos have two horns, one of which usually grows to around 10 inches long, while the other is usually only a stub.

Sumatran rhinos are distinct for having hair, a coat of red fur covering most of their body. Calves are hairier than adults, but it’d be hard to spot their fur in the wild due to the thick mud of their habitats. Today, about 80 Sumatran rhinos remain in the wild, living in Sumatra and Borneo.

Rhinos have no natural predators in the wild.

Calves are sometimes preyed on by big cats or crocodiles, but those predators tend to avoid adults. This is why calves stick so close to their parents.Unfortunately, humans are not natural predators, with weapons like spears and bows and arrows that eliminate the rhino’s natural advantages. Poaching has caused their population to dwindle.

Rhino horns are prized by hunters.

Rhino horns have several uses, some practical, and others with no factual basis. Among its practical uses is for making handles for daggers, such as in Oman and Yemen. In China and Vietnam, rhino horn is a part of traditional medicine, believed to cure even cancer.

Even in Europe, there is a belief that rhino horn is an antidote to poison and an aphrodisiac. The medical community denounces these claims and compares them to drinking powdered fingernails in water. One of the less-known rhino facts is that heir horns are made of pure keratin, much like a human’s nails. Rhino horns are also used for decorative purposes.

The trade of rhino horns and other body parts is illegal.

Since 1977, the signing of the Convention on International Trade in Endangered Species of Wild Fauna and Flora (CITES) outlawed rhino trade. Despite the ban, the trade continues, with seized horns alone amounting to 11,000 kg worldwide in 2018. Most of the horns go to Vietnam, where a single horn reaches prices of up to $250,000.

In 2011, a conservation group proposed lacing rhino horns with poison to kill parasites and discourage poachers. Once a poisoned horn is used in traditional medicine, it’d cause nausea and convulsions for people who take it. However, critics argued that poachers won’t care if their customers get sick, and the poison won’t affect those who buy rhino horn for decorative purposes.

These rhino horn substitutes are artificially engineered to be like the real thing. Some activists expressed skepticism at offering substitutes as a way to stop the illegal trade in rhino horns and body parts. However, they are still considering its potential success. Now that’s one for hopeful rhino facts.