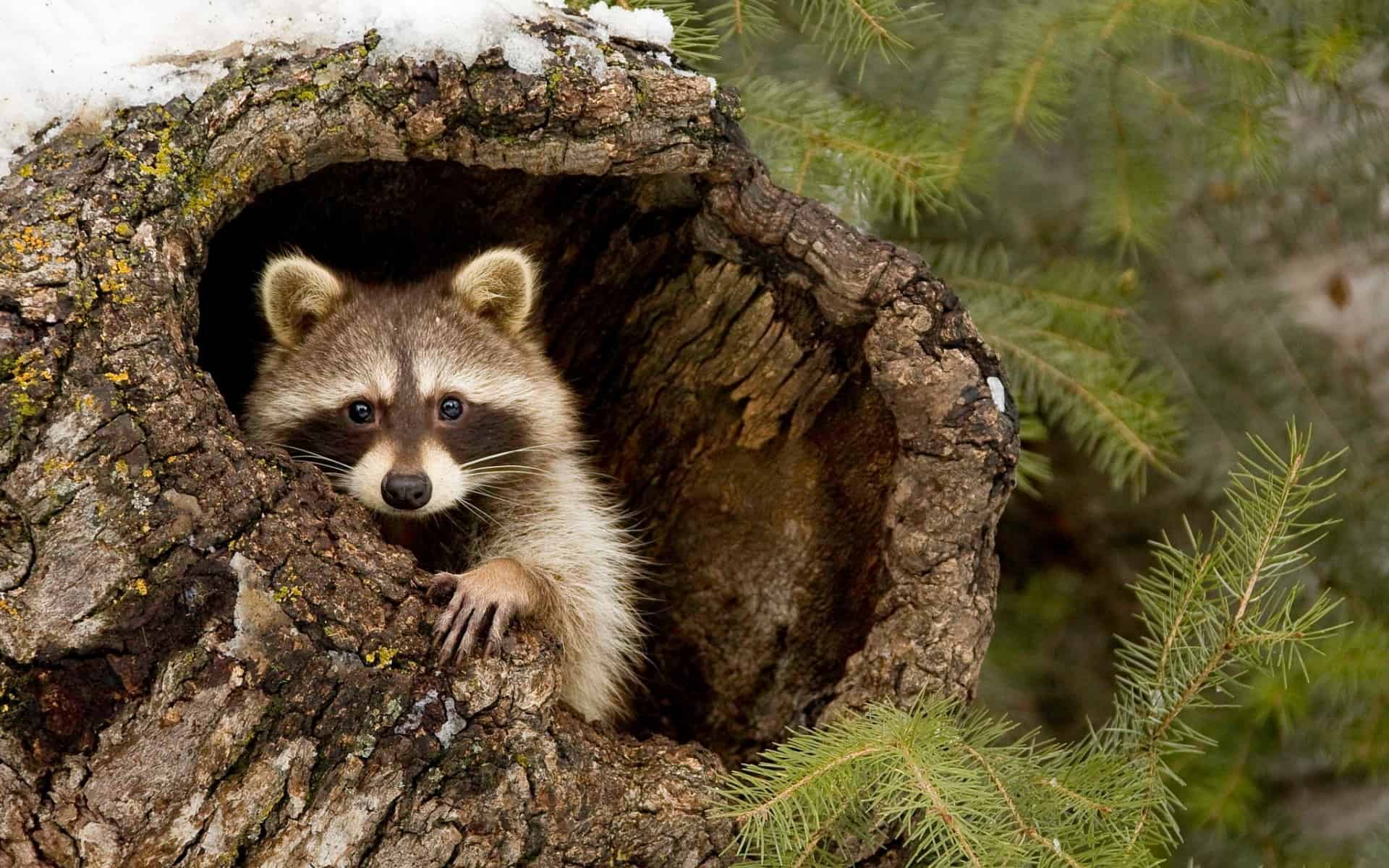 Raccoons, like squirrels, are notorious for digging through trash cans and invading human homes. Adorned with distinctive mask-like face markings, fluffy tails, and almost human-like hands, people have a love-hate relationship with raccoons. However, there’s a lot we don’t know about these fluffy yet fierce bandits. Find out more about this animal with these raccoon facts.

Quick Facts
Essential Facts
Interesting Facts
Table of Contents
01 Raccoon fur protects them against cold weather.
02 Raccoons have communal toilets.
03 Raccoons have a pronounced sense of touch.
04 There once was a presidential raccoon in the White House.
05 A baby raccoon is referred to as a “kit”.
06 Pygmy raccoons exist as a case of island dwarfism.
07 Pygmy raccoons are critically endangered.
08 Tropical raccoons eat a lot of crabs.
09 They were originally forest animals.
10 Raccoons "wash" their food.
11 Raccoons take their name after their hands.
12 They can open containers because of their dexterous hands.
13 They have surprisingly good night vision.
14 They are mostly color blind.
15 Despite looking similar, the raccoon dog is not related to raccoons.
16 Raccoons have been mistaken to be related to many different species.
17 Raccoons are intelligent.
18 Urban raccoons are smarter than their rural counterparts.
19 Raccoons can be unpredictable.
20 Raccoon face markings may have a purpose.
21 Raccoons are part of the culture of the indigenous people of the Americas.
22 Raccoons have a great sense of smell.
23 Raccoons can be hosts to many parasites and diseases.
24 In many languages, raccoons are named after their “washing” behavior.
25 Male raccoons have bones in their penises.
26 They have a good sense of hearing.
27 Raccoon weights vary significantly.
28 Though mostly solitary, raccoons can form social groups.
29 They can eat a wide range of food.
30 Raccoons can teach their young.

The coat of raccoons is made up of dense underfur, which naturally insulates them and protects them against cold weather. In common raccoons, the color of the fur can vary from silvery to blonde, brown, or black shades.

Raccoons typically have communal latrines where several individuals defecate. Raccoon poop often contains undigested seeds and berries that birds and other animals might feast on.

Raccoons have a pronounced sense of touch.

Among all of their senses, the most developed and most significant sensory faculty of raccoons is touch. Since they mostly process their surroundings through touch, raccoons have whiskers near the tips of their paws.

A large portion of their brains are dedicated to processing what they touch, particularly with their front paws or “hands”. Humans, in contrast, rely more on vision. Raccoons, in essence, see with their hands.

There once was a presidential raccoon in the White House.

Raccoons are commonly hunted for their fur, but cooking them for dinner is not unheard of. In 1926, US President Calvin Coolidge received a raccoon to be eaten for Thanksgiving. Coolidge refused to have it killed or eaten, however. Instead, they adopted it as a pet raccoon.

The Coolidges gave her the name “Rebecca”. For Christmas, Rebecca the raccoon received an embroidered collar with the words “White House Raccoon” engraved on it. She also participated in events such as the White House Easter Egg roll. Near the end of his presidency, Coolidge donated Rebecca to Rock Creek Park in DC.

A baby raccoon is referred to as a “kit”.

A baby raccoon or a kit is born blind and deaf. After around two months of pregnancy, a female raccoon gives birth to a litter of about 1-7 kits. Female raccoons are called sows, while males are called boars.

Pygmy raccoons exist as a case of island dwarfism.

Insular dwarfism, or island dwarfism, occurs when animals develop much smaller bodies compared to their mainland cousins. Their genes also tend to branch off over time, creating a distinct species. Such is the case of the Cozumel raccoon, or pygmy raccoon. Compared to their common cousins, pygmy raccoons come smaller and lighter.

Pygmy raccoons can only be found in Cozumel Island in Mexico. Due to their limited habitat, only around 250-300 individuals are left in the wild, which places it near extinction if left unchecked.

Several species of raccoons can be found in the tropic and subtropic regions, such as the Cozumel raccoon and the crab-eating raccoon. As the name suggests, these raccoon species are known for their diet of crustaceans which make up over half of these raccoons’ meals.

They were originally forest animals.

Naturally, raccoons lived in forests near water to support their diet of crayfish and crabs. Woodland forests with lakes and rivers served as the ideal raccoon habitat before the introduction of human-populated cities.

Common raccoons are known to dip their food in water before they eat. Because they have such a strong sense of touch, they inspect their food using their hands. The water has been thought to enhance their tactile ability.

This behavior is also believed to be rooted in their aquatic foraging behaviors. In the wild, they dip their hands in water in search of food. Even in captivity, they associate food with water, hence the food-dousing behavior.

Raccoons take their name after their hands.

Compared to other animals, raccoon hands are almost human-like. These well-developed front paws are what gave raccoons their common name in English. The name “raccoon” originates from the word “aroughcun”, a Powhatan term that means “one who scratches with its hands”.

They can open containers because of their dexterous hands.

Raccoon hands have thumbs that, although not opposable, provide them with more dexterity than their relatives. Because of these thumbs, raccoons can grab things and open containers such as jars, bottles, and trash bins.

They have surprisingly good night vision.

Raccoon senses are powerful, but they are not known to have a great sense of sight. However, raccoons do have good night vision. Similar to cats, they have a reflective layer in the lenses of their eyes called the tapetum lucidum which enhances their vision of nearby objects. That said, they don’t have a wide range of vision with limited depth perception.

They are mostly color blind.

In addition to poor distance vision, raccoon eyes are also not great at distinguishing colors. However, raccoons have been shown to be sensitive to green light.

Despite looking similar, the raccoon dog is not related to raccoons.

At first glance, the tanuki or Japanese raccoon dog looks similar to raccoons, but it is actually more closely related to foxes and other canids. The raccoon dog, in fact, is one of the earliest canids and is prominently featured in Japanese folklore.

Raccoons have been mistaken to be related to many different species.

Raccoons have been placed in the same taxonomy as a number of animals, such as cats, panda bears, and dogs. Through genetic analysis, scientists have found that their closest relatives are the lesser-known cacomistles and ring-tailed cats.

One of the most popular raccoon facts is their tendency to be clever and intelligent. In fact, zoologist Clinton Hart Merriam once described them as more cunning than foxes.

In one study, raccoons have demonstrated enough intelligence to open 11 out of of 13 complex locks in less than ten attempts. This study reaffirmed that raccoons’ cerebral cortex can be compared to those of primates.

Urban raccoons are smarter than their rural counterparts.

Raccoons that live in cities are exposed to a wider diversity of obstacles thanks to humans, which leads to more clever and cunning raccoons. Urban raccoons are bolder and more adapted to learning about man-made obstacles, such as opening trash bins with puzzling lids. How’s that for interesting raccoon facts?

Raccoons can be unpredictable.

Like the Marvel character Rocket Raccoon from Guardians of the Galaxy, actual raccoons also have a propensity for cleverness, mischief, and unpredictability. Despite their soft and cuddly appearance, they can get aggressive especially during the mating season. Definitely one of the raccoon facts to keep in mind if you encounter one in real life.

Raccoon face markings may have a purpose.

The face markings of raccoons are perhaps their most distinct features. They resemble bandit masks and highlight their mischievous nature. Scientists suggest that these masks have a purpose, though. These dark markings have been thought to reduce glare and enhance the raccoons’ night vision.

Raccoons are part of the culture of the indigenous people of the Americas.

Raccoons have been the subject of a number of folk tales of the indigenous peoples, often portrayed as clever tricksters and skilled foragers. They also have been depicted to have supernatural abilities or at least have connections to the spiritual world.

Raccoons have a great sense of smell.

Raccoons can be hosts to many parasites and diseases.

Although they look friendly and adorable, it’s best not to approach a wild raccoon or let them interact with your pets. Not only are they wild and unpredictable, they also are known to carry parasites and diseases.

Some of the most well-documented diseases carried by raccoons are the lethal rabies virus, canine distemper, and leptospirosis. Raccoon poop may also carry roundworms that can be passed on to humans.

In many languages, raccoons are named after their “washing” behavior.

Common raccoons can be observed dousing their food before they eat, which can often be mistaken as washing. This “washing” behavior is reflected in their names in other languages, such as the German term waschbär (wash-bear) or the Italian term orsetto lavatore (little washing bear).

The scientific name of the common raccoon, Procyon lotor, also emphasizes this behavior. “Lotor” is a neo-Latin term for “washing”.

Male raccoons have bones in their penises.

Male raccoons, called boars, are typically larger than females. Among their distinct features is a penile bone referred to as the baculum.

They have a good sense of hearing.

Aside from an excellent sense of touch and sense of smell, raccoons also have sensitive hearing. A raccoon’s hearing is so sharp that it can detect even the movement of earthworms underground.

Depending on its species, raccoons can weigh from 5 to 26 kg (10 to 60 lbs). Like bears, raccoons tend to weigh a lot more in the winter season because they store fat to prepare for hibernation. That said, the largest wild raccoon ever recorded weighed around 28 kg (63 lbs).

Raccoons typically live alone but have been found to band together in sex-specific social groups. Unrelated males form a gaze of up to four individuals, while related females have a shared territory.

They can eat a wide range of food.

Described as one of the most omnivorous animals, the raccoon is well-adapted to eat almost anything it comes across. As opportunistic feeders, raccoons have been documented eating birds, fish, crustaceans, eggs, fruits, and nuts.

Their ability to eat most of these things help them thrive in urban settings where they come across a great abundance of food.

Raccoons can teach their young.

In the Aztec culture, female raccoons were seen as great examples for their society’s wise women because of the raccoons’ devotion to their children. Indeed, raccoon mothers are regularly observed teaching important survival skills to their young, unlike other animals who abandon their kids.