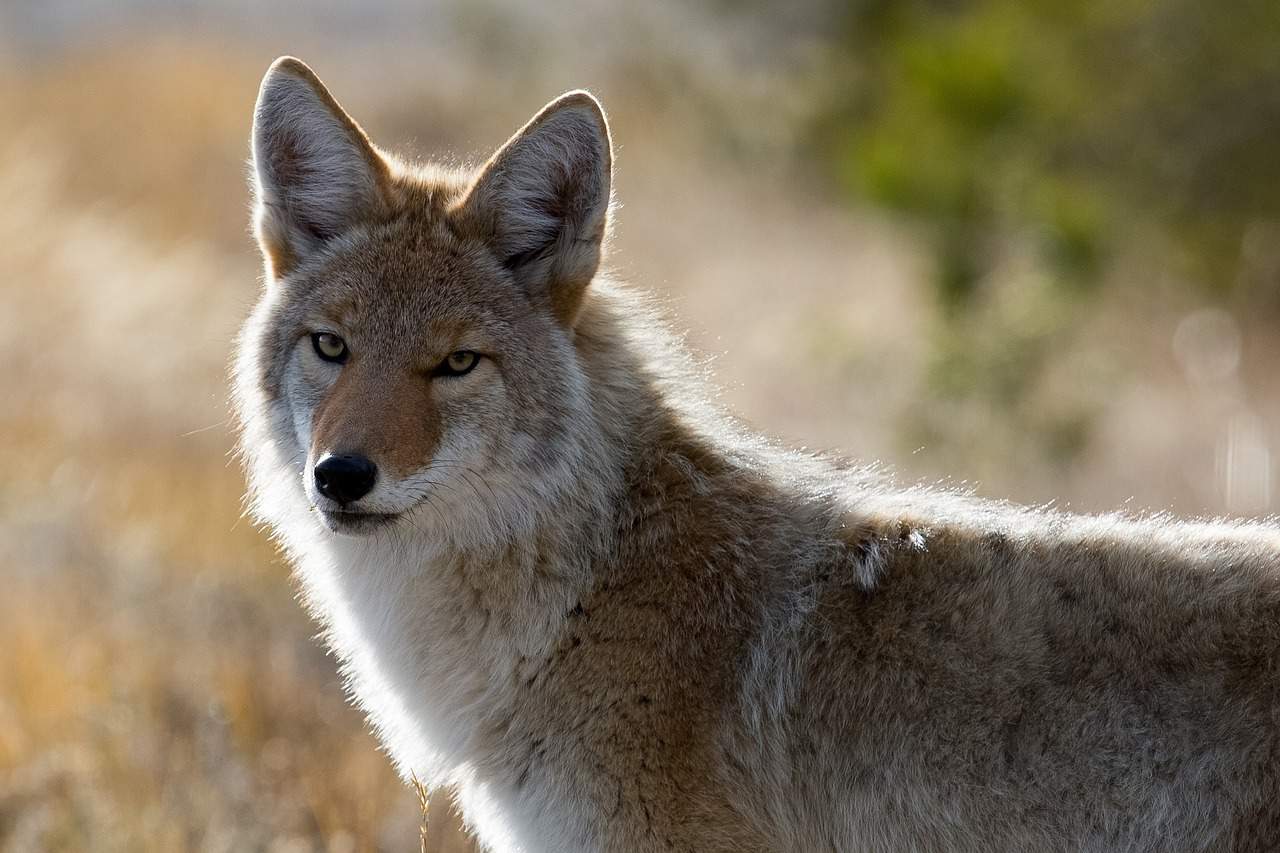 Coyotes are one of the most iconic animals of North America. They appear not just in the wild, but in traditional folklore and popular fiction. But what are these animals really like? That’s what these coyote facts will show you.

Quick Facts
Essential Facts
Interesting Facts
Table of Contents
01 A coyote’s fur depends on where it lives.
02 Coyotes are omnivorous.
03 Coyotes have a respected place in Native American folklore.
04 The ancient Teotihuacan culture associated the coyote with military might.
05 The name coyote has Aztec origins.
06 Experts call coyote-dog hybrids as coydogs.
07 Snow coyotes are a rare breed for coydogs from Newfoundland.
08 Coyotes aren’t as pack-centered compared to wolves.
09 Coyotes are less territorial than wolves.
10 Coyotes do not dig their own dens.
11 Coyotes have the widest vocal range out of all North American mammals.
12 Wolves once limited coyote populations.
13 Several predators prey on the coyote.
14 Coyotes are very prone to disease.
15 Coyote attacks in suburban areas are on the rise.
16 Coyotes are unwelcome in rural areas.
17 Coyotes help keep rodent populations down.
18 Coyotes in urban areas don’t root in or eat trash.
19 Coyote fur didn’t start out with much value.
20 Coyotes have long lifespans by canine standards.
21 Coyotes can tiptoe.
22 Coyotes are not naturally nocturnal.
23 The Looney Tunes character Wile E. Coyote isn't scientifically accurate.
24 Coyotes run faster than roadrunners.
25 Coyotes are not good pets.
26 Coyotes are excellent swimmers.
27 You can tell apart different canines from the way they run.
28 Coyote pups hunt insects.
29 Coyotes eat porcupines.
30 The coyote population is steadily growing.

A coyote’s fur depends on where it lives.

Coyotes in colder latitudes usually have light grey fur with dark patches across their bodies. This is in contrast to those from warmer latitudes, who have light red fur and lighter patches. The texture of their fur is also different. Those from North America tend to have longer and denser fur. Those from Central America though, have short, almost bristle-like fur. Talk about furry coyote facts.

Coyotes are known to eat grass in the spring, and fruits when available. However, coyotes are also hunting animals and primarily consume meat. Most of it is from small mammals, such as rabbits and rodents. They’re known to go after larger prey as well, such as deer. The coyote diet also consists of birds, fish, and even reptiles.

Coyotes have a respected place in Native American folklore.

Coyotes play many roles in folklore and mythology. For the Native Americans in the California region, they see the coyote as a creator deity. Coyotes also symbolize a trickster for some cultures such as the plateau peoples. This particular belief led to the Anglo-American practice associating coyotes with cowardice and betrayal.

The ancient Teotihuacan culture associated the coyote with military might.

There’s a particularly historic example of coyote facts. Teotihuacan is an ancient, ruined city in Mexico that predates the Aztecs and even the Mayans. According to archaeologists, the warriors of Teotihuacan dressed up as coyotes for rituals harnessing the coyote’s power. The Aztecs later shared this belief, with one of their gods even depicted with a coyote’s head. His name explains it:  Huehuecóyotl – Old Coyote.

The name coyote has Aztec origins.

Nahuatl is the native language of the Aztecs of Mexico. The Nahuatl name for the animal was coyōtl, which the Spaniards transcribed as coyote. However, Coyōtl had a different transcription in English: cayjotte or cocyotie. Coyote only became the recognized name for the animal in the 1880s.

Since the mating cycles of dogs and coyotes are usually mismatched, these coyote dog hybrids are uncommon. Coyotes are also usually hostile to dogs. A coydog’s appearance depends on the parents’ breeds, but coyote traits tend to dominate.

Snow coyotes are a rare breed for coydogs from Newfoundland.

They got that name from their snow-white fur. Experts believe that the breed came from a pairing between a coyote and a golden retriever. How the coyote got to Newfoundland in the first place is still debated by the experts.

This is due to coyotes mating for life, unlike wolves who only might mate for life. A coyote pack is a family centered around a mother and breaks once the pups grow up. The mother and her mate then start a new family, while the children look for mates of their own.

Coyotes are less territorial than wolves.

They usually prefer to stay unnoticed to outsiders unless the female is pregnant. Even then they’re content only chasing an outsider out of their territory. And while they chase and bite, unlike wolves coyotes do not usually kill outsiders. Something useful to know, from coyote facts.

Coyotes do not dig their own dens.

Instead, they prefer using natural shelters as dens. These can be caves, hollow logs, or even under bushes and shrubs. Coyotes also use the abandoned dens of other animals, such as badgers and foxes.

Coyotes have the widest vocal range out of all North American mammals.

Coyotes’ scientific name Canis latrans translates to barking dog. Adult coyotes have no less than 11 vocal tones for different situations. These can either be for individuals or for a group. For individual coyotes, woofs, huffs, barks, and barking howls either deliver a threat or sound an alarm. Used near their dens, these sounds prompt the pups to retreat inside. Growls can also deliver a threat but are also used by pups playing with each other. Yelping or low-pitched whines communicate submission. A superior coyote responds to submission with high-pitched whines. A lone howl announces a coyote separated from its pack, while group howling marks a reunion. Group howls are also used by coyote packs to announce their presence to other coyotes in an area.

This observation comes from how coyotes spread north and east after wolf populations dropped thanks to hunting. It’s reinforced further when coyotes entering wolf territories get ejected with violence. In the 1940s, wolves were reintroduced to Isle Royale in Michigan and wiped out the coyote population in the area. Coyote populations in Yellowstone dropped by 40% in the 1990s for the same reason.

Several predators prey on the coyote.

Coyotes may be hunters, but they aren’t at the top of the food chain. Bigger predators sometimes feed on the coyote once they invade their territories or compete for food. These predators include cougars, lynxes, bears, alligators, and even eagles. Other predators do not dominate against coyotes but compete against them regardless. These include bobcats and foxes.

Coyotes are very prone to disease.

Coyotes are the most common carrier for diseases and parasites of all North American carnivores. Scientists say this is because of their wide range of habitats and diverse diet. Viral diseases known to infect coyotes include rabies, distemper, hepatitis, and even encephalitis. They’re also known to suffer from Tularemia, which is especially fatal for pups. Parasitic infections are also very common, such as mange, ticks, and fleas. Fluke infections are rare but deadly: 90% of fluke-infected coyotes die from the infection. Mites and lice rarely infect coyotes but are less deadly compared to flukes. Now there’s something very useful to know from coyote facts.

Coyote attacks in suburban areas are on the rise.

Ironically, this is because suburban people do not threaten or harm coyotes when they appear, and instead keep their distance. They’re also known to feed coyotes, intentionally or not. This caused coyotes to feel relaxed in suburban areas and encouraged them to enter at will. Coyotes have been seen harassing and even attacking pets, children, mailmen, and cyclists among others.

Coyotes are unwelcome in rural areas.

Coyotes prey on livestock, costing the owners money and property. Dogs are usually enough to keep coyotes away from livestock, but they don’t always succeed. For this reason, government agents regularly hunt coyotes to control their population. Private individuals also put bounties on coyotes that successfully prey on livestock. In 2017 alone, hunters in Utah killed 11,000 coyotes to collect over $500,000 worth of bounties. A grim, but unfortunate example of coyote facts.

Not all effects of the coyote’s expansion into inhabited areas are bad, though. Rats and other rodents are part of their diet, after all. Coyotes preying on these pests help keep their numbers down and keep them from bothering people.

Coyotes in urban areas don’t root in or eat trash.

Unlike other wild or feral animals in urban areas, coyotes steer clear of garbage. They prefer a natural diet, usually by hunting other animals like pets or ferals. They also break into gardens to steal and eat fruit and vegetables. Definitely one of the coyote facts to be thankful for.

Coyote fur didn’t start out with much value.

Coyote fur was first sought out to keep livestock safe. However, low beaver populations from 1860 onward led to a boom in coyote fur trade. While not durable enough for industrial use, coyote fur is used for clothing. Aside from coats, jackets, scarves, and muffs, coyote fur is used to line women’s clothing.

In the wild, coyotes live on average up to 14 years before dying of old age. In captivity, good care and plentiful food extend this up to 20 years.

Now there’s something interesting and even lighthearted from coyote facts. Yes, coyotes can stand and walk on their toes as people do. And like people, they do it to move softly and quietly to avoid drawing unwanted attention their way.

Coyotes are not naturally nocturnal.

It’s a common misconception to think that coyotes are nocturnal, but they’re not. Coyotes in the wild and even in captivity are active in the day and sleep at night. The misconception comes from how many coyotes have spread into urban areas. To avoid the masses of people in the daytime, urban coyotes adapted themselves to become nocturnal.

Wile E. Coyote’s fur color is the proper color for a coyote living in a desert. However, the rest of his appearance isn’t scientifically-correct. And of course, coyotes in nature don’t use complicated schemes to catch their prey – or equally-complicated gadgets, for that matter.

Coyotes are not good pets.

It’s not that you can’t domesticate them, because you can. To domesticate a coyote, you need to raise one from a puppy to adulthood. What makes them unsuitable for pets is their shyness to strangers. Some people have also said that coyotes have a strange smell compared to other canines.

Coyotes usually only swim to escape from pursuers, such as other predators or even humans. But coyotes will also swim short to medium distances in search of new territory or hunting grounds.

You can tell apart different canines from the way they run.

Unbelievable as it sounds, it’s true. Pups practice their hunting skills on insects. They don’t always succeed, but experts think that’s not the point. Instead, this kind of behavior develops when the pups grow up and need to hunt on their own.

Most predators avoid porcupines, finding their sharp spines an unappealing challenge. Coyotes have a creative way of working around those spines. Working in pairs or as a group, one coyote tries to flip the porcupine onto its back. Lacking spines on its belly, the porcupine is helpless against the second coyote waiting to pounce. Talk about a clever example of coyote facts.

The coyote population is steadily growing.

This doesn’t sound like much, but keep in mind that 90% of coyote pups die in childhood. Coyotes also face competition from other predators, with bigger ones preying on coyotes as well. We humans actively hunt them, killing over a hundred thousand coyotes per year. But despite all that, coyotes continue to grow their numbers and spread over the Americas.