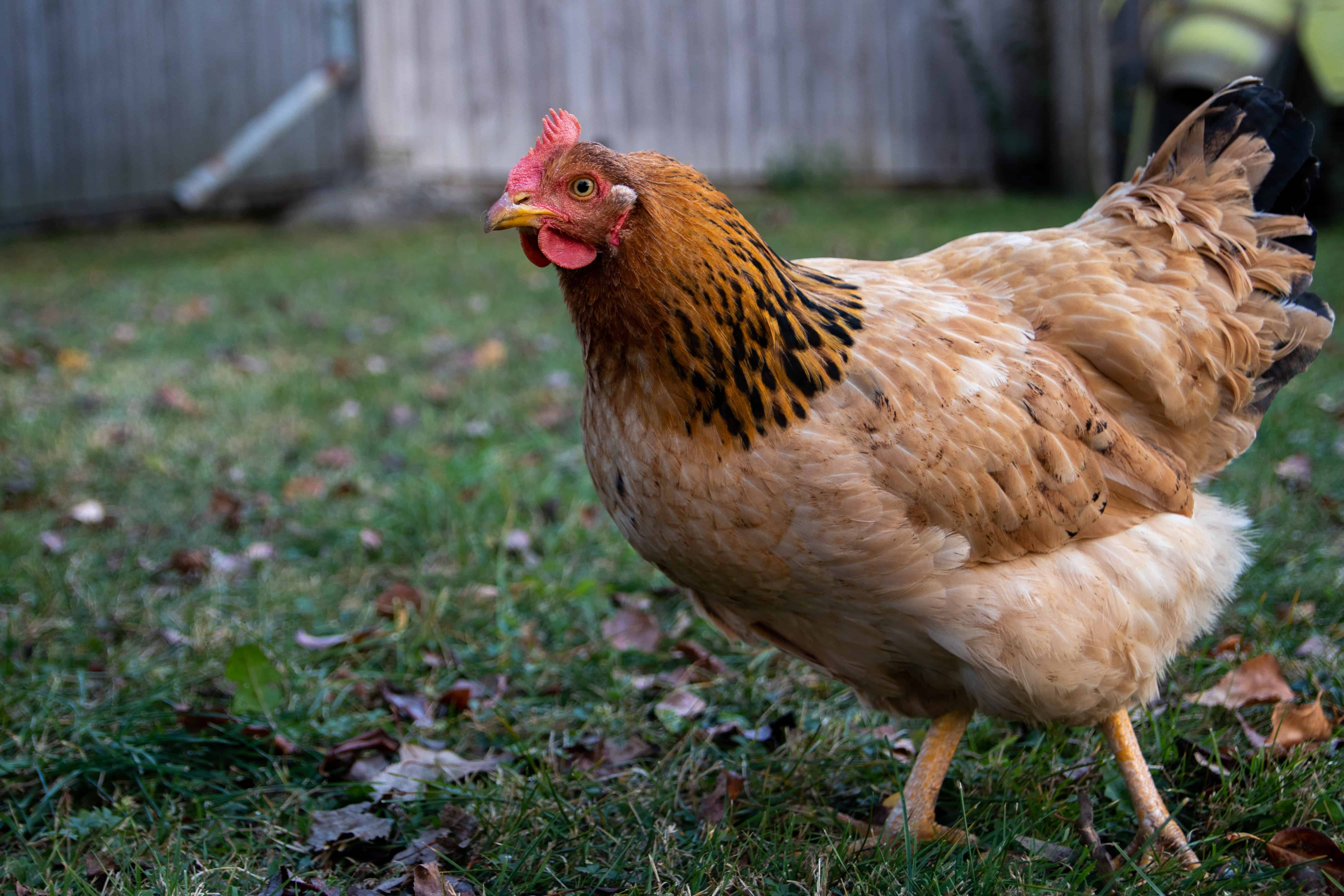 Is that a chicken? Whether in your yard or on your plates, chickens are ever-present in our lives. Aside from their pedestrian habits and origin being popular punchlines, people don’t really know much about chickens.  These chicken facts will prove that they’re not as bird-brained as you think they are.

Quick Facts
Essential Facts
Interesting Facts
Table of Contents
01 Chickens have better vision than humans.
02 A headless chicken survived for 18 months.
03 Chickens can swim.
04 Hens can eject sperm.
05 Chickens take dust baths.
06 The color of an egg depends on chicken earlobes.
07 Chicks display object permanence at 2 days old.
08 Chickens shed their feathers when stressed.
09 “Chicken guns” launch chicken carcasses at aircraft windows.
10 The longest recorded chicken flight lasted for 13 seconds at 301 feet.
11 Chickens outnumber humans.
12 The fear of chickens is called Alektorophobia.
13 Chickens can feel pain.
14 On average, 97 chickens are killed every 0.05 seconds worldwide.
15 A rare breed of chicken from Indonesia that is completely black can be sold for $2,500.
16 The world record for the most egg yolks in one egg is 9 yolks.
17 Chickens have taste buds.
18 A hen has to eat four pounds of feed for every one dozen eggs.
19 The most number of eggs laid by a chicken in a day is 7.
20 The record number for eggs laid by a chicken in one year is 371.
21 Chickens lay larger but fewer eggs as they grow older.
22 Eating fried chicken using anything aside from your bare hands is illegal in Gainesville, Georgia.
23 Chickens can navigate using the sun.
24 Roosters perform a mating dance called “tidbitting.”
25 Chickens are believed to originate from tropical rainforests.
26 A hen can lay more than 300 eggs per year.
27 Chickens can recognize up to 100 faces.
28 A chicken can recognize its name.
29 Hens’ combs get larger before laying eggs.
30 Hens talk to their eggs…
31 Chickens can run as fast as 9 kmph.
32 They have crazy agility.
33 They love playing.
34 A chicken’s digestive, excretory and reproductive tracts come together at the cloaca…
35 Although rare, a chicken can be both male and female.
36 Chickens poop in their sleep.
37 Only 2 countries in the world don’t have chickens.
38 A chicken has an average of 8,325 feathers.
39 Chicks molt three times before they mature.
40 The oldest chicken recorded lived up to 22 years old.
41 Chickens dream.
42 Chickens teach each other.
43 The earliest chicken joke dates back to 1847.
44 They sleep like humans.
45 There’s a mushroom that tastes just like chicken.
46 It only takes 26 hours for a hen to produce an egg.
47 Female chickens carry thousands of undeveloped yolks.
48 Chickens mate with multiple partners.
49 If the white of an egg is cloudy, it means the egg is fresh.
50 Koreans are serious about fried chicken.

Chickens have better vision than humans.

Humans have three different cone types in their eyes which let us see red, green and blue. Chickens, however, have an additional two cone types which allow them to distinguish violet and ultraviolet light. This is why they crow early in the morning – they can see the sunrise an hour before humans can.

A headless chicken survived for 18 months.

Mike The Headless Chicken, also known as Miracle Mike survived for 18 months without his head. According to scientists, his brain stem and jugular remained intact, and a clot prevented him from bleeding to death. His owner would feed him through a dropper and his trachea. Eventually, though, he choked to death.

Some even enjoy it, but they need to be able to get out of the water to avoid drowning. They can swim leisurely but generally avoid deep waters.

If the hen does not want offspring with a certain rooster, she can eject its sperm to halt the fertilization process.

Humans avoid dust, but chickens love it. They dig pits in the ground and “wash” themselves with the dust to help with oil in their feathers and drive away parasites.

The color of an egg depends on chicken earlobes.

In humans, babies don’t develop this concept until they are 7 months old.

Chickens shed their feathers when stressed.

Similar to how humans lose hair when under lots of stress, chickens start to shed their feathers. This is important to note if you have any pet chickens.

Aircraft engineers use this peculiar if not morbid mechanism to test the resistance of airplane windows and engines by blasting dead chickens at the planes.

The longest recorded chicken flight lasted for 13 seconds at 301 feet.

Chickens can’t fly as much as other birds because they evolved for egg and meat production, which altered their wing to weight ratio.

As of 2011, there has been a recorded number of 19 billion chickens – which is over twice the latest population count for humans (7.7 billion).

The fear of chickens is called Alektorophobia.

Well-known British rugby player Tommy Seymour is among people who suffer from this phobia.

Chickens have pain receptors like humans. Their beaks can even bleed.

On average, 97 chickens are killed every 0.05 seconds worldwide.

The poultry industry is one of the most controversial yet thriving areas of livestock with the U.S. having a higher chicken meat consumption compared to beef.

A rare breed of chicken from Indonesia that is completely black can be sold for $2,500.

This rare chicken has black feathers, beak, and organs due to hyperpigmentation.

The world record for the most egg yolks in one egg is 9 yolks.

Certain conditions can cause abnormalities in chicken eggs, such as multi-yolks, no yolks, or even no shells.

They can taste saltiness, but not sweetness. While humans have 8,000-10,000 taste buds, the average chicken only has less than 350.

A hen has to eat four pounds of feed for every one dozen eggs.

Hens need a certain amount of sustenance to produce what is found in your fridges.

The most number of eggs laid by a chicken in a day is 7.

The average hen lays one egg a day.

The record number for eggs laid by a chicken in one year is 371.

The current record-holder is a white leghorn who laid well over 300 eggs.

Chickens lay larger but fewer eggs as they grow older.

Just as how human reproduction is affected by age, normal chickens experience the same with their eggs.

Eating fried chicken using anything aside from your bare hands is illegal in Gainesville, Georgia.

In 1961, Gainesville, Georgia passed an ordinance which makes it illegal to eat fried chicken with anything other than your hands. It was actually a publicity stunt to promote the city as the “poultry capital of the world.”

Chickens can navigate using the sun.

This helps them locate food and water, as well as tell the time.

Male chickens will perform this mating ritual through moving their heads up and down, dropping and picking up pieces of food, and emitting a certain call.

Chickens are believed to originate from tropical rainforests.

This is why chickens tend to be territorial and still possess wild instincts.

A mother hen turns her eggs about 50 times per day. Some species such as hybrid hens are bred to continually lay eggs.

Chickens can recognize up to 100 faces.

They can easily tell who their owner is from other people that they see regularly. They recognize other animals, too.

A chicken can recognize its name.

Similar to how dogs and cats respond to their names, chickens can tell when you’re calling them.

An increase in the size of a hen’s comb indicates she will lay eggs soon.

Hens talk to their eggs…

… and they talk back! Hens are shown to communicate with their offspring in eggs, with the chicks eventually developing enough to respond from inside their eggs.

Chickens can run as fast as 9 kmph.

The runaway chicken can sprint 9 km per hour for short bursts – that is almost 3 meters per second, which is bigger than the average human stride.

They have crazy agility.

Running after escaped chickens is a common image, and this is because of their high agility. Their instincts allow them to evade predators, and consequently, owners trying to herd them up into their pens or coops.

Chickens would spend the majority of their day running around and playing with other chickens.

A chicken’s digestive, excretory and reproductive tracts come together at the cloaca…

…but don’t worry: The intestinal opening presses shut when an egg is laid, so a hen won’t lay and poop at the same time.

Although rare, a chicken can be both male and female.

A chicken can have half of its body with rooster traits and the other with hen traits. This phenomenon is called bilateral gynandromorphism.

Chickens poop in their sleep.

A lightweight chicken excretes about 120 pounds of droppings per year, while a heavier ones release 180 pounds. They are even shown to excrete in their sleep. Talk about healthy bowel movement.

Only 2 countries in the world don’t have chickens.

The only continent with no live chickens is Antarctica. The only country without chickens is Vatican City — although they keep a chicken flock 26 miles from the city at Castel Gandolfo.

Although it may depend on the breed, an Ohio man once counted a Plymouth Rock’s feathers to over 8,000.

After adulthood, they will shed once a year. However, renewing an entire set of plumage may take as long as three years.

The oldest chicken recorded lived up to 22 years old.

Muffy, a Red Quill Muffed American Game from Maryland lived until she was 22.

Chickens teach each other.

Mother hens have been shown to teach their offspring what not to eat (ie: which colors of grains are inedible/poisonous).

The earliest chicken joke dates back to 1847.

The earliest instance of this classic was written in 1847 in the New-York Monthly Magazine.

To maintain good health, chickens need 6 to 8 hours of darkness and restful sleep.

The wild mushroom Laetiporus is said to taste like chicken. This is why it is also known as the chicken mushroom, or the chicken fungus.

It only takes 26 hours for a hen to produce an egg.

After it is laid, it takes 21 days for the egg to incubate and hatch.

However, a hen rarely lays more than a small percentage of these eggs.

Monogamy isn’t their thing, it seems.

If the white of an egg is cloudy, it means the egg is fresh.

Try to look out for that when you open an egg.

Koreans are serious about fried chicken.

In South Korea, there are more fried chicken places than there are McDonald’s joints worldwide.