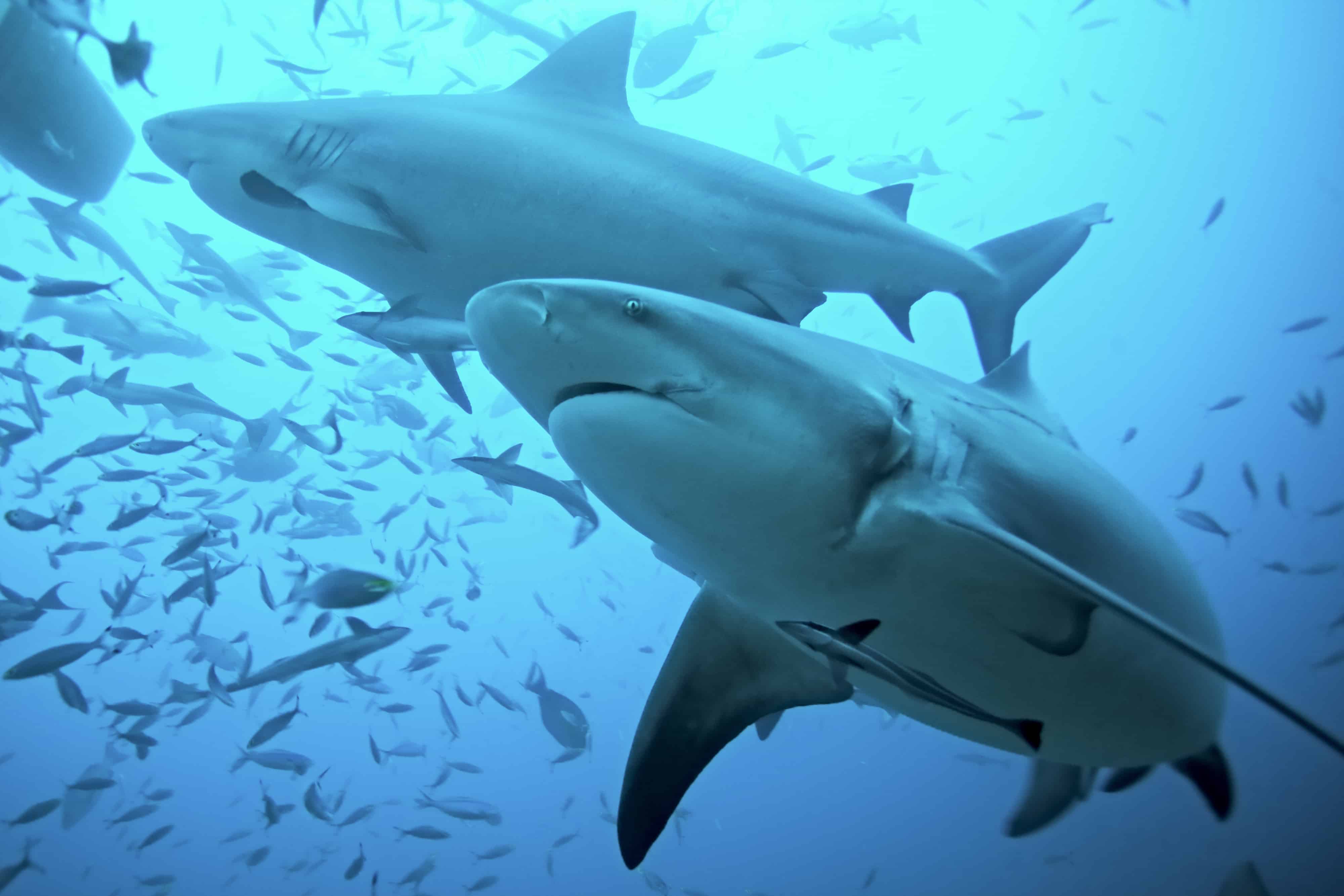 Bull sharks are among the most common animals in the world. So common, that you might just find them at that beach you’re planning to visit over the summer. However, there’s more to them than that. Find out more about these creatures of the deep with these bull shark facts.

Bull sharks can live in both saltwater and freshwater habitats.

However, Bull sharks prefer to live in saltwater habitats. They typically stay in warm coastal regions or river estuaries, usually less than 30 meters deep. They’re also known to live in waters running 150 meters deep, however, and known to swim over 4000 km upriver in freshwater. Long distance swimming is only one of many neat bull shark facts.

Bull sharks have special adaptations to help them live in both saltwater and freshwater.

Here’s a particularly remarkable example of Bull Shark Facts. These adaptations are primarily found in bull sharks’ kidneys and liver. Bull sharks’ kidneys are equipped to handle large amounts of salt that come with living in saltwater habitats. Excess salt goes to the liver, which converts it to urea and then released as urine from the shark’s body.

When living in freshwater habitats, a bull shark’s kidneys automatically reduce their filtering of the salt in the bull shark’s body. This allows the bull shark to balance the amount of salt its body needs to live according to the needs of its surrounding environment.

Bull sharks have to live in both saltwater and freshwater.

Scientists discovered that bull sharks need both environments to survive only recently. In order to determine if bull sharks can survive purely freshwater habitats, they conducted a study.

However, all the test subjects died within 4 years. Although it’s still being studied why that is the case, the most likely theory is that bull sharks simply can’t get the food they need in solely freshwater habitats.

Age determines where bull sharks are likely to live.

Bull sharks live all over the world.

In the Americas, they’re found along the Pacific coast of Central America all the way to Peru in the south. Bull sharks are also present in the Gulf of Mexico and the Atlantic Seaboard of the United States, as well as along the entire Atlantic coast of South America north of Argentina.

They’re also found along most of the Atlantic coast of Africa, and off East Africa outside of the Red Sea. Bull sharks are especially populous in South East Asia and Oceania. Enclaves of bull sharks also live off the southwest coast of India, as well as parts of China and in the Persian Gulf.

Bull sharks have a diverse diet.

Bull sharks play an important role in ecology as predators. Their most common prey are bony fish, including other bull sharks. They’re also known to feed on stingrays and turtles.

Birds and mammals are also known to become prey for bull sharks, usually seabirds and dolphins, but they also attack and feed on land birds and mammals when the opportunity appears. Bull sharks also eat crustaceans like crabs and shrimp, and echinoderms like starfish and sea urchins.

Bull sharks can control their digestion to a certain point.

Bull sharks have the ability to control how quickly they digest their food as a survival mechanism. When the amount of food in their environment is low, bull sharks digest more slowly than normal, allowing them to need to eat less at a time.

This ability also allows them to expel their food if needed, usually when they find themselves facing a predator. The predator would get distracted by the bull shark’s thrown up food, eating it while the bull shark gets away. A strange, but true example of bull shark facts.

One of those natural predators is other bull sharks. Bigger sharks like tiger sharks and the great white sharks also prey on bull sharks, though usually only younger ones. Studies show that both freshwater and saltwater crocodiles prey on bull sharks as well, with at least one documented case of a Nile crocodile seen eating a bull shark.

However, hippos are too big for these aggressive fishes. The skin of adult hippos is also too thick for a bull shark to cause any real damage. Bull sharks usually attack juveniles, only to get fended off by the rest of the herd.

This is unfortunately thanks to their coastal habitats, which bring them into close proximity with humans. Add to that their territorial instincts, and it’s no surprise for their common attacks on humans in the water.

In fact, bull sharks are the sharks most likely to attack humans. While other sharks like tigers sharks and great white sharks also attack humans and are better known in popular fiction, statistics show that bull sharks have more victims than either.

Australia and India are 2 countries known for bull shark attacks.

Bull sharks regularly attack swimmers in the inlets of Sydney Harbor. In India, they’re known to swim the Ganges River, and attack bathers even in urban areas along the riverbanks. Talk about dangerous Bull Shark Facts.

Specifically, their involvement in the 1916 Jersey Shore shark attacks, which saw 4 people dead and 1 more injured. Though great white sharks may also have participated in the attacks, the bite patterns on the casualties point to bull sharks as the more likely culprits.

A golf course in Queensland, Australia, is home to a number of bull sharks.

They prefer to live and hunt alone. That said, bull sharks are also known to pair up with other bull sharks at times, usually to trick and hunt difficult prey.

Bull sharks also get together to mate and reproduce.

Mating rituals have yet to be directly observed, but scientists expect it to be quite brutal. Scars found on a number of sharks shortly after mating has led scientists to think bull shark mating rituals involve battles for dominance between males and females.

Female bull sharks instead carry their young for a year-long pregnancy period. They then give birth to up to 12 bull sharks at a time. Mother bull sharks don’t care for their young, who get born able to look out for themselves.

Bull sharks prefer to give birth in freshwater habitats, with scientists thinking this is to allow the young bull sharks time to build up a tolerance for saltwater habitats over time.

Bull sharks have the ability to differentiate between colors.

Scientists found this out in an experiment when they tried to use wire mesh to corral bull sharks. It was there that they saw bull sharks noticing and then avoiding brightly-colored wire mesh by sight alone.

In contrast, bull sharks had difficulty noticing and then avoiding wire mesh that blended into the surrounding water. Scientists theorize this is why bull sharks are more likely to attack swimmers in brightly-colored clothes than those wearing dark-colored ones.

Scientists noticed this from observations made in 2008 at the Caloosahatchee River estuary in Florida, USA. Bull sharks simply allowed the currents or even tides to move them from one place to another and allowing them to save energy they’d have to use to move otherwise.

Bull sharks are game fish around the world.

Sporting fishermen worldwide use rods and reels to try and catch bull sharks, usually from vantage points like piers and bridges. Sometimes, they’d also try to catch bull sharks along the shorelines. According to international statistics, the largest bull shark caught by rod and reel was in Cairns, Australia.

Bull shark habitats around the world are under threat from human development.

This comes in many forms, from the dredging of river mouths and estuaries to allow ships to pass, to the building of dams, piers, harbors, and other infrastructure. Pollution is another concern – in particular, the dumping of toxic waste and contaminated water into river systems.

All these and more not only threaten bull sharks, but countless other species that humanity shares the world with.