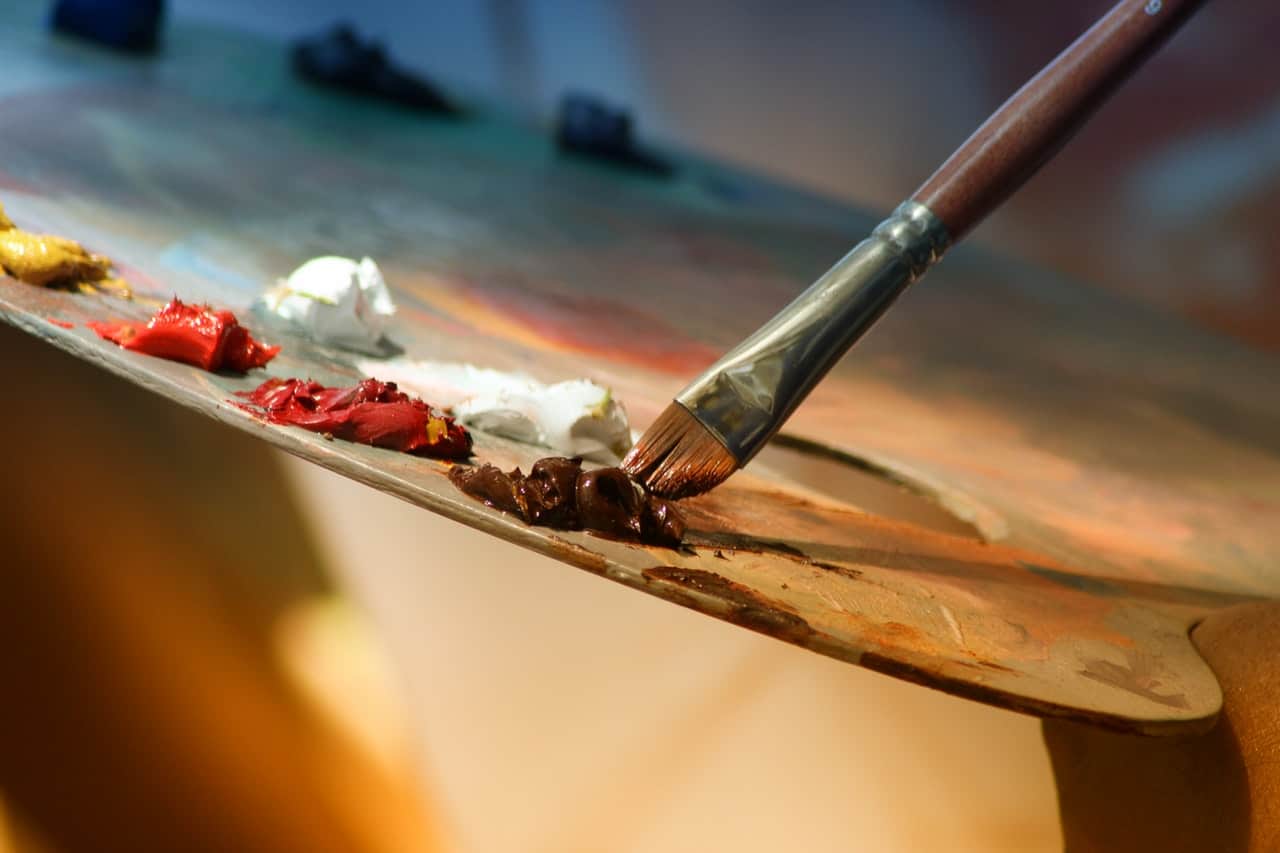 Art is often considered one of the best ways you can express yourself and your ideas. Often great artists are also considered to have unique visions and skills. Moreover, art is a great part of every culture and with each generation, great pieces are created. Take a look at some of them with these cool art facts.

Quick Facts
Essential Facts
Interesting Facts
Table of Contents
01 The Starry Night was painted in a psych ward.
02 The Lover’s eye accessory was popular during the 18th and 19th centuries.
03 Bob Ross once helped a color-blind viewer.
04 The Art Institute of Chicago has a real-life replica of Van Gogh’s bedroom painting.
05 The sculpture of David was originally going to be a statue of Hercules.
06 Art competitions were once part of the Olympics.
07 The ‘Creation of Man’ was made with a series of special scaffoldings.
08 There are four versions of The Scream.
09 Kim Dong Yoo created a painting of Albert Einstein using portraits of Marilyn Monroe.
10 The Mona Lisa was not famous until it was stolen.
11 The Soviet-era monument was vandalized.
12 One of Picasso’s pieces was deemed immoral.
13 There are 12 definitions of the word ‘art’ in the Oxford Dictionary.
14 Picasso believed that art is done to wash away the dust of our daily lives from our souls.
15 Van Gogh has only sold one painting during his lifetime.
16 The pop-art depiction of Campbell’s Soup comes in a set of 32.
17 Jackson Pollock is famous for his drip paintings.
18 The Easter Island heads have bodies.
19 New Jersey features a spoon museum.
20 The largest statue in the world is the Mount Rushmore National Memorial.
21 Banksy is the most famous graffiti artist in the world, but no one knows his real name.
22 Leonardo da Vinci was ambidextrous.
23 The American Gothic depicts the ideals of rural America.
24 Claude Monet was told to be a grocer instead of an artist.
25 Artist Salvador Dali was convinced that he was his dead older brother.
26 The Thinker was originally much smaller.
27 Mary Cassat advocated for her learning.
28 The Le Bateau was hung upside down at the NY Museum of Modern Art.
29 Romanticism was a cultural movement that originated in Europe.
30 Anish Kapoor recently received the payment for the damages of one of their works.

The Starry Night was painted in a psych ward.

For the first of our art facts, we talk about one of the most famous art pieces in history. Vincent van Gogh painted the piece during his stay at the Saint Paul de Mausole Psychiatric hospital in Saint Remy. The painting depicts the town he saw through his room window along with his additional visions.

The Lover’s eye accessory was popular during the 18th and 19th centuries.

At the time, this was considered a secret romantic gesture that originated from Prince Wales who fell in love with a widow. He proposed by giving her a locket with a painting of his eye inside. Wearing this locket would symbolize the love you have for your partner and soon enough it became a trend.

A fan once approached the artist and stated that he could not be a painter due to his handicap. Ross helped encourage the young viewer by spending an entire episode painting in only in grey. How’s that for heartwarming art facts?

The Art Institute of Chicago has a real-life replica of Van Gogh’s bedroom painting.

If you ever feel like you need some creative inspiration, try and remember these art facts. The bedroom is available for rent on Airbnb for $10 a night. The Art Institute states that it hopes to help open fresh eyes and perspectives to the painting.

The sculpture of David was originally going to be a statue of Hercules.

The marble slab that was originally planned to be used by Agostino di Duccio was cut 3 years early by Michelangelo into the David statue. Michelangelo began working on the sculpture in 1501 and completed it in 1504.

Art competitions were once part of the Olympics.

Here’s one of our more surprising art facts. Between the years of 1912 and 1948, medals were awarded for painting, sculpting, music, architecture, and literature. Olympic athletes were required to be amateurs in the arts for them to qualify.

The ‘Creation of Man’ was made with a series of special scaffoldings.

Michelangelo painted the fresco ceiling of the Sistine Chapel entirely standing up. He also invented a special scaffolding that would help the painting stick to the chapel walls.

There are four versions of The Scream.

Edvard Munch painted four different versions of the famous painting, The Scream. The first version was painted in 1893 and was exhibited in Oslo. In the same year, a pastel version was also made. The third version was said to be privately owned, and the last version was given to the Munch Museum.

The works of this artist are known for creating images of famous icons out of the smaller images of other famous individuals. All of his works are rendered by hand. How’s that for inspiring art facts?

The Mona Lisa was not famous until it was stolen.

Before the year 1911, most people were not aware of the existence of the Mona Lisa. By this time, the painting was already over 350 years old. Critics and scholars only began paying attention to the art piece after it was stolen. Several people gathered to see the empty exhibition of where the Mona Lisa was placed rather than to see the painting itself.

The Soviet-era monument was vandalized.

This monument is found in Voronezh, Russia and was vandalized. However, what makes this one of our more art facts is that it was not destroyed. The monument was vandalized by painting the star to look like Patrick Star, a popular character from the cartoon Spongebob Squarepants.

One of Picasso’s pieces was deemed immoral.

Picasso’s abstract depiction of five prostitutes from Barcelona was called immoral during its release in 1907. Over 100 sketches and studies were used before the artist set his vision onto canvas. In some incarnations, one of the prostitute figures is depicted as a man.

There are 12 definitions of the word ‘art’ in the Oxford Dictionary.

One definition depicts art as the making of objects, music, etc to express emotions. Another defines art as simply creating drawings or images. Other definitions define art as a performance or art of letters and events. How’s that for educational art facts?

Picasso believed that art is done to wash away the dust of our daily lives from our souls.

To briefly explain this quote, Picasso believed that art is fundamental for our souls and that it constantly craves for it. While food is eaten to replenish our body, art is used to feed the demands of the soul. Art renews and gives us happiness. How’s that for art facts?

Van Gogh has only sold one painting during his lifetime.

During his time, Van Gogh struggled as an artist. Only one person has ever bought his paintings from Van Gogh himself during the time he was alive. This painting was sold in Brussels for 400 Francs only a few months before he passed away.

Read also: 100 Music Facts That You Will Want To Hear And Learn About

The pop-art depiction of Campbell’s Soup comes in a set of 32.

Each canvas represented separate soup varieties that the brand sold at the time. The artist Andy Warhol did not give instructions as to how they would be displayed, so the paintings were arranged in chronological order of when the soups were introduced. Now that’s some tasty looking art facts.

Jackson Pollock is famous for his drip paintings.

His unique style of painting also dubbed him Jack the Dripper by TIME magazine. All of Pollock’s pieces deliver movement, vitality, and flow. Pollock was also seen as the chief innovator responsible for the new American style of art, abstract expressionism.

The Easter Island heads have bodies.

The bodies are buried underground to keep them stable. These statues are also known as Moai by the Rapa Nui people who carved them. The Easter Island heads are one of the most notable world monuments dating from 1100 and 1500 CE.

The museum is home to over 5,400 spoons that come from all over the globe. Each spoon commemorates a special event. The displays are rotated seasonally so that only around 250 are displayed at a time.

The largest statue in the world is the Mount Rushmore National Memorial.

Mount Rushmore began construction in 1927 and was completed 14 years later in 1941. It features the heads of four former presidents of the United States. These include George Washington, Theodore Roosevelt, Abraham Lincoln, and Thomas Jefferson.

Banksy is the most famous graffiti artist in the world, but no one knows his real name.

This street artist is greatly known for his controversial and politically themed pieces. Many believe that he is of English origins born around the time of the mid-70s. Banksy’s art rose in popularity in the late 90s and is the subject of a 2010 documentary titled ‘Exit Through the Gift Shop.

Leonardo da Vinci was known to be able to write with one hand while simultaneously drawing with the other. Researchers were able to conclude this by observing certain writings in his works that were mirrored or written backward on one side and normal on the other.

The American Gothic depicts the ideals of rural America.

Claude Monet was told to be a grocer instead of an artist.

Monet’s father did not approve of him growing to become an artist. Instead, he was told to become a grocer to find a stable source of income. Monet’s work is mainly known for his water lily paintings inspired by his garden.

Artist Salvador Dali was convinced that he was his dead older brother.

Nine months after the death of his older brother, Dali believed that he became his reincarnation. He continued to live on with this belief for years while conducting strange acts. Dali is known for once showing up to deliver a speech wearing a scuba diving suit.

The Thinker was originally much smaller.

The first original sculpture of the thinker was originally much smaller. It was only around 70cm originally and was gradually made bigger and bigger. Several copies were made over time ranging in sizes and variants.

Mary Cassat advocated for her learning.

During her time in school, women were not yet given equal rights and female artists were not taken seriously. Frustrated, she left school and hired a private teacher which led her to create works that she became recognized for.

The Le Bateau was hung upside down at the NY Museum of Modern Art.

New York once opened a new exhibit that featured the last works of Henri Matisse. During the period of the exhibit, not the staff nor the visitors noticed that one of the works, Le Bateau, was hung upside down. This mistake was not noticed until 47 days later. How’s that for embarrassing art facts?

Romanticism was a cultural movement that originated in Europe.

This artistic movement was said to be inspired by revolutionary events like the French and American revolutions. This artistic style was mainly expressed through art, literature, and music. The first believed to have used this art form was Jean-Jaques Rousseau.

Anish Kapoor recently received the payment for the damages of one of their works.

Now for the last of our art facts, we talk about an unfortunate event that artist Anish Kapoor once experienced. The artist created a sculpture made from polystyrene, resin, and cement. Cleaners confused this piece for garbage and were thrown out by accident. In return, Kapoor received a hefty cheque from all the damages.