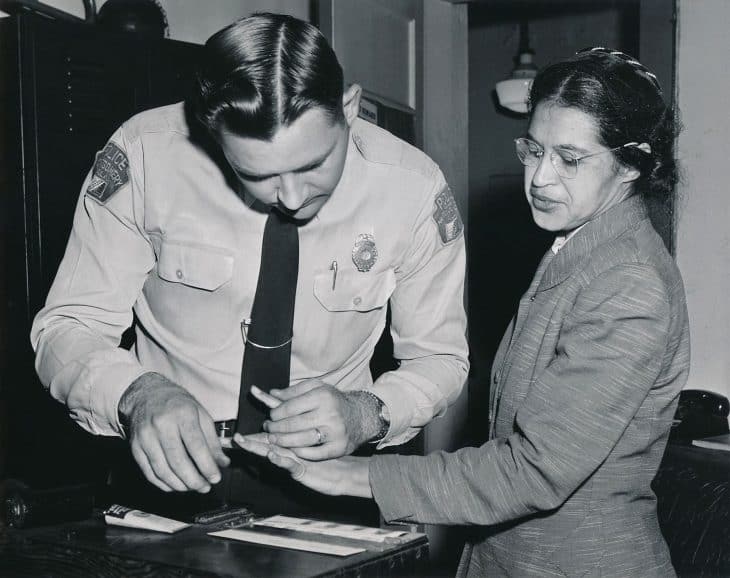 Quick Facts
Essential Facts
Interesting Facts
Table of Contents
01 Rosa Parks Facts Infographics
02 Rosa Parks is Known as the Mother of the Modern Day Civil Rights Movement
03 Parks’ Education Was Delayed
04 Parks Married a Barber
05 Parks Wasn’t the First to Take a Stand Against Segregation
06 Parks Was Tired but Not from Her Work
07 Parks Started the Rosa and Raymond Parks Institute for Self Development
08 Parks Received the Congressional Gold Medal
09 Parks was Honored by Several Presidents
10 Even Without Attending College, Parks Held Multiple Degrees
11 Parks Was Honored Even After Her Death
12 Rosa Parks Sued Outkast
13 Parks Was a Respected Author
14 Parks Went to War with the NAACP Image Awards
15 Parks Was Arrested More Than Once
16 Parks Had Already Encountered the Bus Driver and Typically Avoided Him
17 Rosa Parks Facts – Facts about Rosa Parks Summary 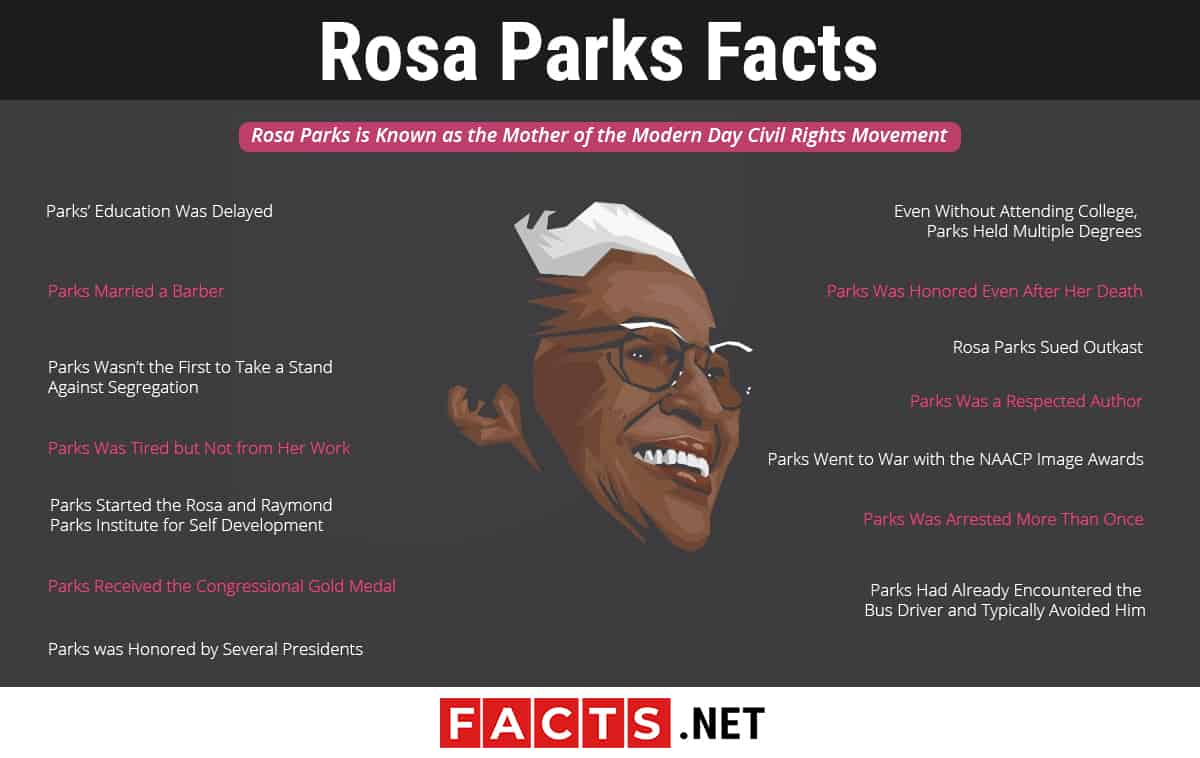 Let’s begin our Rosa Parks facts by stating that Parks is famous for beginning the Modern Day Civil Rights Movement. Without her leadership and infamous act on a bus, it is unknown what route history would have taken. Parks came from humble beginnings though. She was born on February 4, 1913 in Tuskegee, Alabama as Rosa Louise McCauley. She was the first child in her family and eventually had a younger brother, Sylvester McCauley, born in 1915. Their parents were James and Leona Edwards McCauley. The family was close, humble and could not have known the bright future in store for Parks.

The McCauley family eventually moved to Pine Level, Alabama. Parks was enrolled in the rural school system. She completed her initial education at the age of 11 and her mother then enrolled her in the Montgomery Industrial School for Girls. It was a private institution with a great reputation. She completed her education there and moved on to Alabama State Teacher’s College High School.

Unfortunately, she did not graduate because she instead turned to taking care of her terminally ill grandmother, Rose Edwards. Parks was dedicated to her education though and enrolled again. Fate was against her and she was forced to drop out again to take care of her now ill mother. She did eventually receive her high school diploma in 1934.

Rosa Parks married her husband in 1932, when she was only 19. Raymond Parks was a member of the National Association for the Advancement of Colored People (NAACP), which took up a large amount of his free time. To make ends meet, he worked as a barber. Although not a college graduate, he was supportive of his wife’s education and encouraged her to enrol and finally complete the required courses to earn her high school diploma. Both were respected members of Montgomery’s African-American community and were active in trying to raise awareness regarding the rules of segregation.

Parks Wasn’t the First to Take a Stand Against Segregation

Rosa Parks facts tells us that there were other incidents similar to hers on the bus. In 1892, a man named Homer Plessey refused to leave an all white rail car in Louisiana. Charges were filed and the case made it all the way to the Supreme Court, titled Plessey vs. Ferguson. Plessey lost the case due to the newly founded Jim Crow laws, the same laws that Parks would fight against decades later. These laws would not be overturned until 1954 in the case of Brown vs. Board of Education.

Parks Was Tired but Not from Her Work

A common myth surrounding Parks is that she didn’t get up from her seat because she was tired from a long day at work. The truth is a little more simple. Parks was simply tired of segregation and how every aspect of her life revolved around what she was or wasn’t allowed to do, all because of her skin color. She was 42 years old when she refused to give up her seat. After that many years of segretation, Parks had finally reached her breaking point. The movement that followed was more tiring but certainly worth it.

Parks Started the Rosa and Raymond Parks Institute for Self Development

Parks started the Institute with Elaine Eason Steel in February of 1987. The Institute was founded in honor of Parks’ late husband, who had passed away ten years before its opening. The Institute’s mission is to motivate youth ages 11-17 to reach their highest potential through training in life skills. The curriculum focuses on Parks’ philosophy of ”Quiet Strength”. It is ran by volunteers from professional, technical, community and internationAL backgrounds that then share their knowledge and skills with students, all in a manner that reflects Parks’ specified approach to self development and growth.

Parks continued to gain recognition for her life’s work well after retirement age. At the age of 86, hundreds of people gathered at the U.S. Capitol to witness Parks as she received the Congressional Gold Medal in 1999. This was one of her biggest achievements. This award is the highest honor someone can receive in the United States. Other recipients include George Washington, Thomas Edison, Betty Ford, and Mother Teresa. When asked about the honor, Parks stated, ”This medal is encouragement for all of us to continue until all have rights.”

Parks was Honored by Several Presidents

Parks was again honored by the United States government, this time by former President George W. Bush, who took it upon himself to honor Parks one year after her death in 2006. Bush proclaimed that a statue would be erected in Parks’ honor in the National Statuary Hall in Washington, D.C. President Bush also released an official statement on the statue, saying that he wanted it to serve as remembrance and to commemorate one of the most important people in the history of the United States. The statue still stands today and is a popular tourist attraction.

Throughout her life, Parks was awarded with dozens of honorary doctorates from universities around the world. She was also inducted as an honorary representative and member of the Alpha Kappa Alpha Sorority. The list of Parks’ awards and achievements is almost never ending, including the NAACP’s Spingarn Medal, the UAW’s Social Justice Award, the Martin Luther King, Jr. Non – Violent Peace Prize and the Rosa Parks Peace Prize. In 1999, Parks was named as one of the 20 most powerful citizens of the century by Time Magazine. In 2000, Troy University dedicated The Rosa Parks Library and Museum in her honor, which features the famous statue of Parks sitting on a bus bench.

Parks Was Honored Even After Her Death

One of the more inspirational Rosa Parks facts tells about what happened after Parks passed away. Parks was diagnosed with progressive dementia in 2004 and passed away on October 24, 2005. In the days following her death, all city buses in the cities of Montgomery and Detroit reserved their front seats by placing black ribbons over them. They remained this way until Parks’ was laid to rest. Her body was first taken to Montgomery for a viewing at the St. Paul African Methodist Episcopal Church, where Secretary of State Condoleezza Rice spoke. Her body was then taken to Washington D.C., where she was the first woman to even have a viewing in the Capital. Her body was then taken back to Detroit for a final viewing and her burial.

In 1999, Parks sued the critically-acclaimed hip-hop group Outkast, stating that their latest song titled ”Rose Parks” was a misappropriated use of her name. She was also offended by the song’s vulgar language. Parks stated that there wasn’t an artistic connection between her name and the song’s content. The lawsuit was first dropped but the Supreme Court eventually allowed the lawsuit to proceed. In the end, the suit was settled on April 14, 2005, with OutKast paying Parks an undisclosed cash settlement. They also agreed to work with the Rose and Raymond Parks Institute for Self Development in creating engaging and educational curriculum surrounding Parks’ life.

Parks Was a Respected Author

Besides being an amazing activist, Rosa Parks facts also tell us that Parks wrote several books, including Rosa Parks: My Story, which focused on her life before the day on the bus, Quiet Strength, which described her Christian faith and the role that it played throughout her life, Dear Mrs. Parks: A Dialogue with Today’s Youth, and I Am Rosa Parks, a book for preschoolers. Dear Mrs. Parks: A Dialogue with Today’s Youth received the NAACP’s Image Award for Outstanding Literary Work in 1996. Parks was passionate about spreading her philosophy and telling her story.

Parks Went to War with the NAACP Image Awards

Even though the NAACP was a large part of her life and a strong support base, Parks eventually boycotted the NAACP Image Awards in 2003 because of the movie Barbershop, which was quite successful at that time. Cedric the Entertainer, an actor in the movie, portrayed a man who thought that Parks wasn’t a key part of the famous bus incident. Cedric also happened to be hosting the Image Awards that year. NAACP President Kweisi Mfume stated that he felt the event was exaggerated in the media while Parks felt the need to raise her voice in the situation because of her late husband who was a member of the NAACP.

Parks Was Arrested More Than Once

Parks was arrested after not giving up her seat to a white man on a bus on December 1, 1955, which sparked a boycott against the Montgomery bus system. Parks worked for a short time as a dispatcher for the group organizing the boycott and arranged carpool rids for boycotters. But on February 21, 1956, Parks was again arrested for violating a state law against organized boycotting. She was arrested along with over a hundred other boycotters. The New York Times featured a picture of Parks being fingerprinted. After the arrests, Parks and her husband began experiencing discrimination at work and even death threats. They moved to Detroit in 1957, where they lived for the rest of their lives.

Parks Had Already Encountered the Bus Driver and Typically Avoided Him

The man driving the bus on the day that Parks refused to give up her seat was James Blake, who had a bad reputation among black passengers. Over 10 years before the December incident, Parks paid her fare on a bus driven by Blake. She was then told that she had to enter through the back entrance rather than the front. As she walked alongside the bus towards the other entrance, Blake sped away. When interviewed later about Parks not giving up her seat, Blake stated, “I wasn’t trying to do anything to that Parks woman except do my job. She was in violation of the city codes, so what was I supposed to do? That damn bus was full and she wouldn’t move back. I had my orders. I had police powers—any driver for the city did. So the bus filled up and a white man got on, and she had his seat and I told her to move back, and she wouldn’t do it.” 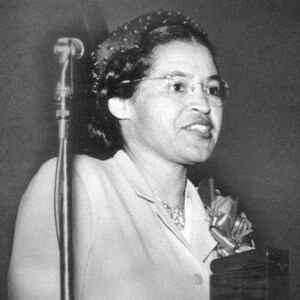 Rosa Parks facts tell the amazing life story about a woman who was brave enough to change history. Learn about her family, her education and her never ending list of accomplishments, all which sparked on a December day when she refused to give up her seat for a white man. Get ready to be amazed with Rosa Parks, the Mother of the Modern Civil Rights Movement, a wife, an author and a true inspiration to us all.