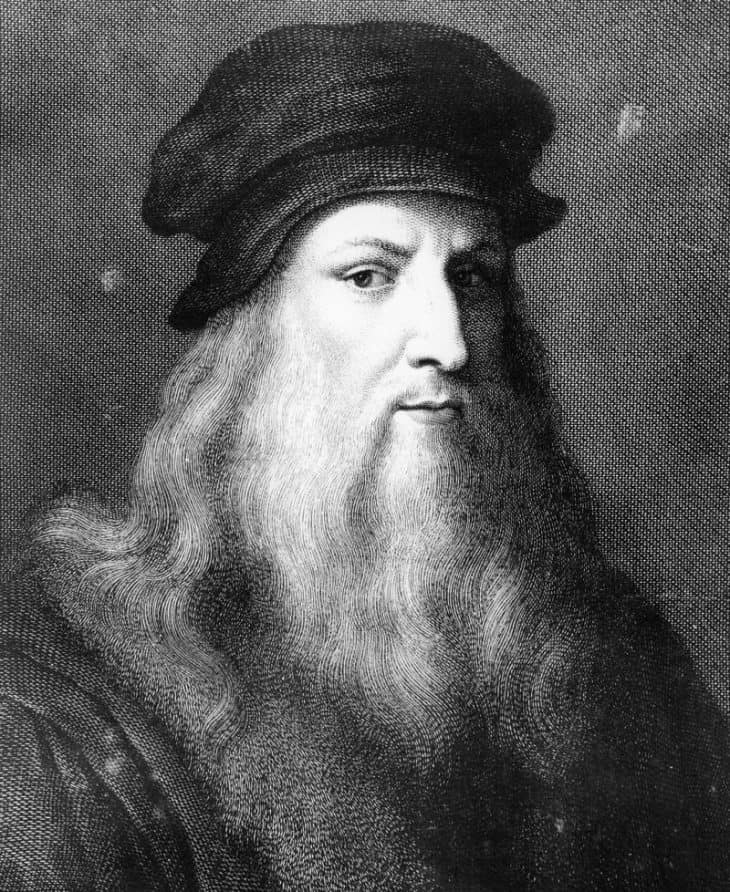 Mona Lisa and The Last Supper are just two of Leonardo da Vinci’s most notable works. Leonardo da Vinci is the representative of the Italian Renaissance. He was not just a painter, but also a mathematician, scientist, engineer, and many more. Find out more about this talented man in these Leonardo da Vinci facts.

Leonardo da Vinci has wide intellectual interests and achievements both in science and arts earning the title of the Renaissance Man. Leonardo is one of the most famous inventors and scientists in history. His curiosity and his natural sense of the laws of nature inspired his intelligence.

Leonardo da Vinci devoted his time to the discoveries of facts and the puzzle of nature. His revelations to science and arts were remarkable. Leonardo da Vinci solved the curious and superstitious minds of people in the field of science, learning, reason, and tolerance. During his era, he was an internationally famous scientist, painter, inventor, sculptor, musician, engineer, architect, mathematician, anatomist, philosopher, geologist, biologist, and astronomer.

Leonardo da Vinci had 12 siblings with 9 brothers, and 3 sisters.

He has numerous famous paintings.

Leonardo da Vinci is the painter of Mona Lisa and The Last Supper. but aside from that, he still has other paintings in his work of art which are: Salvator Mundi, The Virgin and Child with St Anne, Madonna of the Yarnwinder, Bacchus, Benois Madonna, Dreyfus Madonna, La Belle Ferronniere, Lady with an Ermine, Leda and the Swan, Litta Madonna, Madonna of the Carnation, Portrait of a Musician, Portrait of Ginevra de’ Benci, St Jerome in the Desert, St John the Baptist, The Adoration of the Magi, The Annunciation, The Virgin of the Rocks London, The Virgin of the Rocks Louvre, and The Battle of Anghiari.

On August 21, 1911, Vincenzo Peruggia stole Mona Lisa in Louvre Museum, France, and hid the painting in his apartment in Paris for two years. He managed to go back to Italy (his homeland) along with the painting but he got caught and arrested. After this incident, the masterpiece of Leonardo da Vinci became even more popular due to media and newspaper headlines. Vincenzo Peruggia said he did it for a patriotic reason and he wanted to bring the painting back to Italy “after Napoleon stole it”. Vincenzo Peruggia was released from jail after a short time and served in the Italian army during World War I. Today, Mona Lisa is back in the Louvre Museum.

A face-recognition software determines that Leonardo’s painting Mona Lisa is 83% happy, 9% disgusted, 6% fearful, and 2% angry. Nicu Sebe at the University of Amsterdam in the Netherlands tested emotion-recognition software on the famous Mona Lisa smile. The algorithm, developed with researchers at the Beckman Institute at the University of Illinois, examines key facial features of the Mona Lisa such as the curvature of the lips and crinkles around the eyes, then scores each face to six basic emotions.

Many believe that Mona Lisa was first painted in Florence.

Many believe that Mona Lisa was first painted in Florence in 1503 or 1504. While the Louvre claims it was unquestionably painted between 1503 and 1506, Martin Kemp, an art historian, notes that it is difficult to confirm the dates.

Guinness World Records lists Mona Lisa by Leonardo da Vinci as having the highest value for painting insurance ever. On December 14, 1962, the Mona Lisa has a value of one hundred million dollars. In 2018, considering inflation, the value of 1962 would be around eight hundred and thirty million dollars.

Who was Mona Lisa?

People think that Lisa Gherardini is Mona Lisa and the subject of the painting. She was the wife of Francesco del Giocondo, a wealthy Florentine silk merchant. Historians believe Francesco commissioned the painting to celebrate the birth of Andrea, his second son.

People have many Mona Lisa theories.

The Mona Lisa painting by Leonardo da Vinci had several theories. First, she was secretly pregnant by her smile. Second, there were singers and clowns entertaining her that amused Mona Lisa when Leonardo portrayed her. Third, Leonardo da Vinci himself was slyly hidden in the portrait of Mona Lisa.

Leonardo da Vinci's The Last Supper painting is not in a museum.

The Last Supper is in the dining hall at the monastery of Santa Maria Delle Grazie in Milan, Italy (a church and Dominican convent). There are many reproductions and replicas in all sizes, but the original is 15 feet by 29 feet.

Leonardo da Vinci is famous for being ahead of his time. He was also able to draw the blueprint for some of the key developments in mechanical engineering. His technical innovations and ambitions were significant such as the winged flying machine, diving equipment, self-propelled cart, among others. There is no sign of whether he executed these sketches. But the meticulous description reveals just how Leonardo da Vinci conceived of these creations.

Leonardo da Vinci's notebooks is full of his unique view of the world.

Leonardo da Vinci has diagrams, sketches, notes and observations in his notebooks that offer a unique insight into how he saw the world. In his work as a military and marine engineer for the duke of Milan, Leonardo appears to have started collecting his thoughts in notebooks from the mid-1480s. Not a single sheet containing a random sequence of ideas and inventions— the workings of either a developer or a scientist— uses paper just as it did. The notebooks contain meticulous diagrams and notes in the Italian mirror writing of the 16th century which is in reverse from right to left.

He made a self-portrait drawn with red chalk.

In 1512, Leonardo da Vinci’s self-portrait was drawn with red chalk at the age of 60 when he lived in France. This original painting, Portrait of a Man in Red Chalk, measures 33.3 cm x 21.3 cm. It’s now part of Biblioteca Reale’s stunning collection in Turin. The portrait of Leonardo as a polymath or “Renaissance Man” was extensively reproduced and iconic representation. However, some historians and academics disagree about the true identity of the sitter.

He was arrested on allegations of sodomy, a crime punishable by death in Florence in the 15th century, along with several of his male companions. However, his case was dismissed when there were no witnesses at court hearings.

Leonardo da Vinci's scope and range of interests in recorded history is uncomparable.

Although his empirical methods were unorthodox in his day, an art historian said that Leonardo da Vinci’s scope and range of interests in recorded history is without equal and that his intelligence, anger, and complexity appear remarkable for us. His world view is interpreted by scholars as logical.

When Leonardo da Vinci reached the age of 20, he was acknowledged as a master in the St. Luke Guild of medical artists and doctors. Though his father has set him his studio, due to his fondness for Andrea del Verrochio (an Italian painter, sculptor, and goldsmith), he still chose to collaborate and stay with him. The earliest dated work known by Leonardo is the 1473 Arno Valley pen-and-ink drawing, cited as the first Western pure landscape. The young Leonardo was the first, according to Vasari, to propose that the Arno River be passable in the cities of Florence and Pisa.

His paintings made his mentor "retire".

Leonardo da Vinci grew up with his father.

Leonardo da Vinci was much closer to his father than his mother. For the first 5 years of his life, he lived with his mother and then settled with his father. But from time to time, he would write letters to his mother. Leonardo’s mother was able to spend with him in the last few years of her life.

Da Vinci is not a real surname.

In the modern sense, Leonardo had no family name, “da Vinci” literally means “from Vinci.” Vinci is a town and municipality of the Metropolitan City of Florence in the Tuscany region of Italy.

Leonardo’s father (Ser Piero) married 4 times during his lifetime, including his marriage to a seventeen-year-old, but the other two wives of his father died without children. Surprisingly, Leonardo da Vinci’s biological mother never married to his father. The father of Leonardo was a rich man and after he passed away, Leonardo had a hard time with his siblings about wealth inheritance.

The marvelous work of Leonardo da Vinci took so much time to complete. He left several paintings, writings and inventions unfinished that did not materialise in his time. He made some of his creations using his drawings, but many were unsuccessful.

Here are some of Leonardo da Vinci's words to live by.

“Simplicity is the ultimate sophistication.” , “A beautiful body perishes, but a work of art dies not.”, “Learning never exhausts the mind.”, “Time stays long enough for anyone who will use it.”, and “It’s easier to resist at the beginning than at the end.”.

On 2 May 1519, at the age of 67, people thought Leonardo da Vinci to have died of a stroke. Before his death, he continued to work on his science studies; his assistant Melzi was his principal successor and executor. Salai was the legacy of the “Mona Lisa.” Leonardo da Vinci died of a probable stroke on May 2, 1519, at the age of 67. He continued work on his scientific studies until his death; his assistant, Melzi, became the principal heir and executor of his estate.

The king of France (Francis I) carried Leonardo da Vinci as a trophy, claiming to have supported him in his old age and held him in arms as he died.

Leonardo da Vinci had a feud with Michelangelo.

Historians say that the two greatest artists of their time are rivals. They criticized each other’s works constantly. Michelangelo always brought up Leonardo’s inability to finish some of his works, and Leonardo goaded him with comments about Michelangelo’s overt muscular sculptures.

People valued Leonardo da Vinci as an engineer throughout his life. He wrote in a letter to Ludovico il Moro (Italian Renaissance prince) that he can build all kinds of machines for both town protection and siege. His sketches of tanks, planes, and weapons came to reality a few centuries later.

Amboise, St Florentine, France, was the place where Leonardo da Vinci wished to be buried and took place on Aug 12, 1519. Unfortunately, in the late 18th century, wars during the French Revolution destroyed it. In 1863, someone found the suspected bones of Leonardo da Vinci in the chapel in Saint-Hubert.

Bill Gates now owns the only copy of Da Vinci’s 72-page illustrated manuscript, the Codex Leicester, also known as the Codex Hammer, which resides outside Europe. The dissertation, which includes pages written by Da Vinci between 1506 and 1510 in Milan and Florence, covers such diverse topics as the propagation of light in the heavens, the observations on why the moon is luminous, and the study of hydrodynamics. Bill Gates purchased the rare historical artifact in an auction for $40 million.

Leonardo DiCaprio got his name because his pregnant mother was staring at Leonardo da Vinci’s painting when he first kicked.