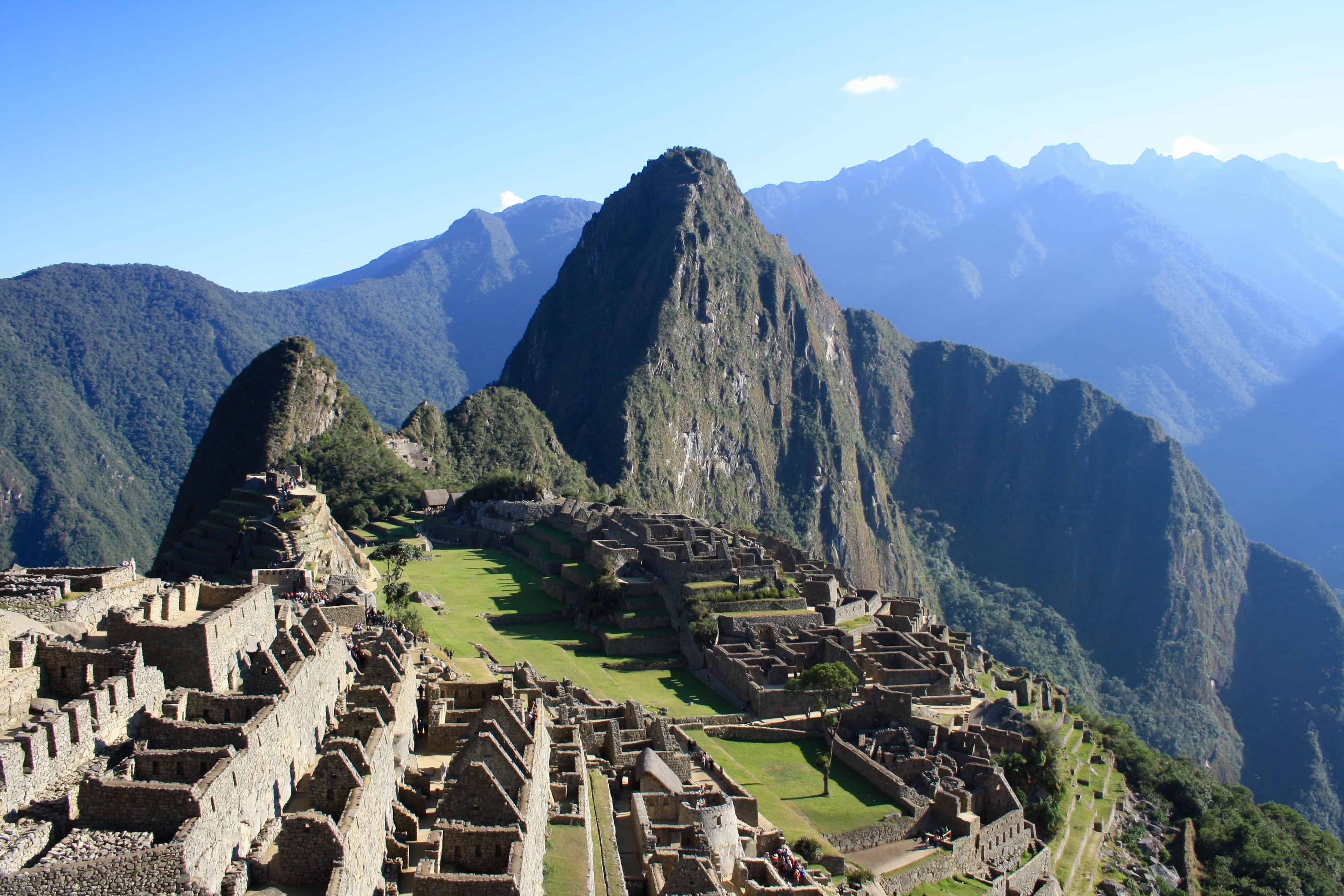 Peru’s Machu Picchu is one of the most popular tourist attractions in South America. Everything from interesting history facts to the dangers and mysteries of this heritage site will have you booking flights to Machu Picchu soon.

Quick Facts
Essential Facts
Interesting Facts
Table of Contents
01 Machu Picchu is 100% handmade.
02 Even the stairways - all 100 of them.
03 You can’t enter the Machu Picchu Citadel without a guide.
04 Altitude sickness is a potentially fatal tourist problem.
05 Around 60% of Machu Picchu construction was done underground.
06 One section of a Machu Picchu wall would’ve taken months to complete.
07 Llamas and alpacas are everywhere.
08 The Picchu is built on fault-lines.
09 The fastest way to Machu Picchu is via train.
10 It’s also walking distance - kind of.
11 Cloud forests are a thing.
12 The Machu Picchu Museum offers free admission at noon.
13 According to a local legend, spirits rise from the ground at night to take people away.
14 Over 600 terraces support the citadel.
15 Machu Picchu can’t be seen from below.
16 It inspired Indiana Jones.
17 Machu Picchu artifacts caused a legal dispute with Yale University.
18 The Incas were serious about their crops.
19 Inca tradition divides the urban zone into two sectors: Hanan and Urin
20 It has 3 main structures.
21 The Hanan zone is in the West.
22 Urin is in the East.
23 No one knows for sure what the Intihuatana is for.
24 The Incas worshipped the sun here.
25 The Temple of the Three Windows is located in Machu Picchu’s Sacred Plaza.
26 Most of the former inhabitants of Machu Picchu were immigrants
27 Experts once theorized that Machu Picchu was a former sacrificial site.
28 The Huayna Picchu has been dubbed “The Stairs of Death.”
29 There are no handrails - only 2 safety lines along the trail.
30 Tourists need to secure a permit and a guide to hike the Inca Trail.
31 Machu Picchu is a no-fly zone.
32 There is a visitor limit of 2,500 per day.
33 You can get banned from the Machu Picchu.
34 You can’t wear traditional clothing.
35 Loud noises are forbidden.
36 The trip to Machu Picchu mountain is 4 hours.
37 You can only tour with 16 people.
38 It is CCTV secure.
39 Baby strollers are prohibited.
40 There have been 4 recorded tourist violations at the Machu Picchu.

You read that right – Machu Picchu is the best remnant in modern times of Incan engineering methods. No tools, wheels, or animals were used in constructing the expanse of the royal estate. Instead, hundreds of men pushed up 50-ton rocks or scaled the mountain to form what we now know as the Incan ruins.

You might be thinking, “What’s so great about stairs?” Well, these stairs were hand-carved each from singular large stone pieces. Talk about commitment.

You can’t enter the Machu Picchu Citadel without a guide.

The local government does not allow entry for first-timers unless they have an official guide. For those who have done the tour before, they must bring proof of their previous trip as well as the identification of their former guide.

There has actually been one recorded death due to an altitude-induced heart attack on the Machu Picchu. A few other casualties within the area tells you that trekking this spot is no laughing matter. Tourists are advised to consult their doctors for any health conditions before attempting to travel here.

Around 60% of Machu Picchu construction was done underground.

The Machu Picchu owes most of its structure to deep building processes such as building foundations and drainages.

One section of a Machu Picchu wall would’ve taken months to complete.

The ashlar masonry method requires all the stones to have a uniform shape, size, and texture. Expert Inca masons had to cut and work these building blocks from scratch.

Llamas and alpacas are everywhere.

Because it is so high up in the mountains, the Incas only had llamas and alpacas to domesticate. Llamas were so important to the Incan society that hunting them was forbidden. Now, these wooly creatures are the only permanent residents of Machu Picchu.

The Picchu is built on fault-lines.

Another extreme feat of the Incan ruins is that this citadel was built on – not one – but two fault-lines. Peru is prone to frequent earthquakes, but the precise ashlar construction puts modern buildings to shame in its resistance to earthquakes.

The fastest way to Machu Picchu is via train.

The road to Machu Picchu via train is a three-part ride: First, you need to go to Cusco via plane (~1 hour) or bus (~23 hours). From Cusco, you can take the Poroy Station (25 mins from Cusco via cab) or the Ollantaytambo Station (2 hrs from Cusco via road) to reach Aguas Calientes. The former route takes 4hrs while the latter takes 2 hours. Finally, ride a shuttle bus from Aguas Calientes to reach Machu Picchu.

You can also reach Machu Picchu through an intense 4-day trek on the Inca Trail. Be warned – people have died there.

Cloud forests are a thing.

The Museo Manuel Chávez Ballon is a 30-minute walk from Aguas Calientes. It is recommended that tourists visit this museum before proceeding to the Inca ruins or the mountains. It is open on Mondays through Saturdays from 10 AM to 4 PM.

According to a local legend, spirits rise from the ground at night to take people away.

To prevent this, locals would place a mirror or shiny piece of metal underneath them before they sleep.

Over 600 terraces support the citadel.

Because it is built along a cliffside, the Incas crafted more than 600 terraces to keep the structure from sliding off.

Machu Picchu can’t be seen from below.

One of the main reasons it remained untouched by the conquistadors who ended the Inca Empire was because they couldn’t even see it in the first place.

George Lucas based Indiana Jones on personal movie heroes and 20th-century archaeologists. Among those archaeologists was Hiram Bingham. If you ask me, Indiana Jones’ exploration of lost cities sounds a lot like a nod to Bingham’s discovery of “The Lost City of the Incas.”

The Peruvian government had a longstanding legal dispute with Yale for the custody of Incan artifacts recovered by Yale alum Hiram Bingham III. They only won the case in 2012.

The Incas were serious about their crops.

Over 300 terraces comprise the agricultural zone, which makes nearly 6 hectares of land.

Functionally, the citadel has an urban sector and an agricultural sector. However, the Incas divided it into the Hanan (Upper) and Urin (lower).

It has 3 main structures.

The three primary structures in the urban zone are the Intihuatana, the Temple of the Sun, and the Room of the Three Windows.

The Hanan zone is in the West.

The Hanan is made up of the sacred, royal, and industrial structures.

Urin is in the East.

The Urin contains most of the residential structures as well as the graveyards.

No one knows for sure what the Intihuatana is for.

The Intihuatana is a giant rock situated atop a pyramid found in the citadel. It is inscribed with markings that indicate the 4 cardinal directions (north, south, east, and west) and seems to indicate the summer and winter solstices. It casts different shadows and lights during specific points of the solstice.

The Incas worshipped the sun here.

The Temple of the Sun (also known as Templo Del Sol) is an Incan structure that commemorates the sun. They used it for offerings and tributes.

The Temple of the Three Windows is located in Machu Picchu’s Sacred Plaza.

This rectangular building contains three windows aligned to the sunrise overlooking the mountain range. It is theorized to have been a ceremony site for the Incas.

Most of the former inhabitants of Machu Picchu were immigrants

Scientists studied skeletons recovered from the area and discovered most of them originated from coastal areas. Their bone composition indicated a short term-diet consisting heavily of corn, which indicates their transfer to Machu Picchu.

Experts once theorized that Machu Picchu was a former sacrificial site.

Gravesites discovered within the vicinity made experts guess that citadel was for the Virgins of the Sun who were offered as human sacrifices. However, it was later found to be graves for workers and builders.

The Huayna Picchu has been dubbed “The Stairs of Death.”

High humidity in Machu Picchu makes these stairs constantly slippery, especially during the late rainy season and early morning. Only 400 people are allowed to climb it per day. They must pre-register and meet certain qualifications to be eligible.

There are no handrails - only 2 safety lines along the trail.

Huayna Picchu roughly translates to “young peak” in the Quechua language. It stands 260m higher than Machu Picchu. Hiking it takes 1.5 to 2 hours.

Tourists need to secure a permit and a guide to hike the Inca Trail.

Because of the perilous nature of this trail, the local government and tourism department doesn’t allow just anyone to participate in the trek.

Machu Picchu is a no-fly zone.

The local government placed this ban to protect the ecosystem of the area.

You can get banned from the Machu Picchu.

A total of 21 tourists have been kicked out of Machu Picchu – with one of them banned for life.

If you’re going to visit Machu Picchu, never wear your country’s traditional clothes. This rule upholds the sanctity of the heritage site.

You can’t clap, shout, whistle, or sing in Machu Picchu.

The trip to Machu Picchu mountain is 4 hours.

The ascent and descent from the mountain take 4 strenuous hours. From the summit, you must descend before 1 PM and leave the mountain at 3 PM.

You can only tour with 16 people.

The tour groups for Machu Picchu have a maximum of 16 people, all accompanied by official guides (for first-timers).

It is CCTV secure.

If you want to bring your baby along, opt for a baby carrier instead.

There have been 4 recorded tourist violations at the Machu Picchu.

There has been a total of 4 recorded tourist violations at Machu Picchu. They all range from indecent exposure to illegal entry.