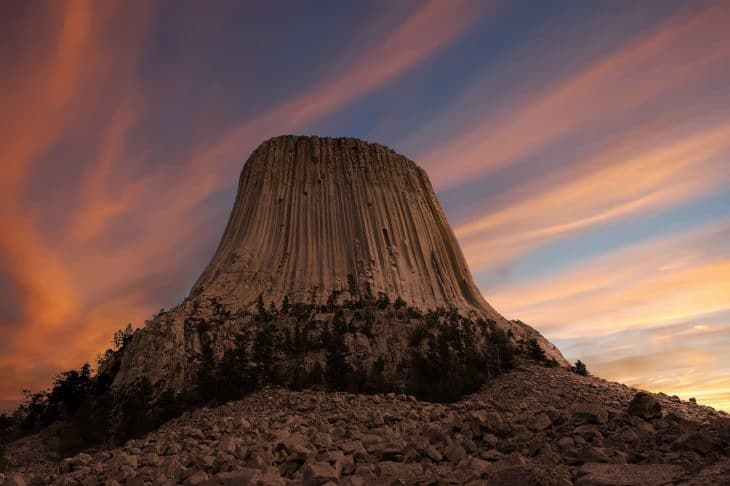 While the name may suggest otherwise, the Devils Tower isn’t as evil as it seems. In fact, you’d see nothing there but an impressive rock formation created by millions of years of weathering. Largely resembling a giant tree stump, this landmark has also made history as the first national monument of the US. Find out more about this wonder of nature with these Devils Tower facts.

The Devils Tower was the United States' first national monument.

On September 24th, 1906, President Theodore Roosevelt declared the Devils Tower as the United States’ first national monument. Like national parks, a national monument refers to a protected area made from any land. Upon being proclaimed by a U.S. President, the land belongs to the federal government to maintain and preserve.

It took a while before the Devils Tower became a national park.

Under the Forest Reserve Act of 1891, the General Land Office (GLO) separated 60 square miles surrounding the Devils Tower as a temporary forest reserve. By June 1892, the reserve shrank down to 18.75 square miles.

Upon the advice of the GLO, Wyoming Senator Francis Warren proposed plans for making a national park out of the butte and its surroundings. However, it was only until 14 years later that the Devils Tower became a national monument.

The Devils Tower is holy to many Native American tribes.

Devils Tower has several names given by the indigenous tribes.

The Native Americans living in North and South Dakota calls it different names such as Mythic-Owl Mountain, Ghost Mountain, and Grey Horn Butte. Interestingly, some of the names have similar themes, such as Grizzly Bear‘s Lodge and Bear’s Tipi.

You can see the Devils Tower for free.

Due to its towering height, you can view the Devils Tower from outside the park itself. In fact, the Devils Tower can be seen from some parts of Wyoming Highway 24. Since it’s in the middle of nowhere, anyone who passes by will have lots of chances to take photographs without spending a dime.

Visitors who are 15 years old and below can enjoy free admission to the monument.

For adults, entrance into the Devils Tower costs $20 per motorcycle and $25 for a car or other vehicle. To obtain a ‘Day Individual Permit, it would typically cost $15. However, visitors who are 15 years old and below can see the monument free of charge.

A commercial Devils Tower tour can cost you a fortune.

You can buy an annual pass for the Devils Tower.

If a group wants to visit the park for educational purposes, they may be qualified for an academic fee waiver that can allow free entrance to the Devils Tower. The park also offers an annual park pass for only $45. Around 20% of the proceeds gathered by the National Park Service stays with them, while 80% goes to the preservation of the Devils Tower National Monument.

About 80% of the Devils Tower's visitors come from the months of May to September.

Each year, the Devils Tower sees the most action in summer months of May until September. Throughout the week, it is highly recommended to visit the monument during weekdays – either in the early morning or in the evening. That said, the Devils Tower stays open 24/7, year-round in normal circumstances.

The most recommended trail for beginners starts in the Visitor Center parking lot. Known as the ‘Tower Trail,’ it offers a 2 km paved hike going to the Devils Tower. In total, the monument has 5 different trails that provides a magnificent view of the Devils Tower.

Each trail is interconnected, with the option to be combined to tailor-fit your journey. Each of these trails span different lengths, which enables the visitor to choose depending on their hiking expertise and experience. However, it’s important to note that pets are not allowed on any park trail.

You can also climb the Devils Tower.

Although it may seem like a daring feat, the monument’s climbing history goes back to the early 1890s. During this time, local ranchers Bill Rogers and Willard Ripley first climbed it all the way to the top using a wooden ladder. Today, climbers across the globe see the Devils Tower as a unique climbing experience.

Rogers and Ripley climbed it because of an economic downturn.

In the 1890s, the ranching industry experienced a deep economic struggle. As a result, business partners Bill Rogers and Willard Ripley planned to attract a huge crowd and make a large amount of money. Originally Rogers’ plan, the two scaled the Devils Tower to much success.

Around 800 people saw Rogers and Ripley.

Bill Rogers and Willard Ripley’s plan was a success in general as it drew around 800 spectators and viewers from different places. Others even traveled hundreds of kilometers to witness the daring attempt to climbing the Devils Tower, which became a historic event ever since.

With the support of Ripley’s father, the business partners started to cut wood that later became a 350-foot ladder. Although Ripley did most of the construction on the ladder itself, both of them helped with the hauling and cutting. Some parts of the wooden ladder can still be found today in the area which has been meticulously preserved over the generations.

On June 28th, 1937, American-German mountaineer Fritz Wiessner became the first person in history to free-climb the Devils Tower. Without using fixed equipment to scale the tower, Wiessner soon pioneered the “free climbing” movement as a whole.

Climbers should expect some wild random obstacles on the way up.

Whether you’re an expert in climbing or not, the National Park Service advises its climbers to be wary of obstacles on their way up. Along the way to the Devils Tower summit, they may encounter hazards such as falling rocks, poison ivy, and spiny plants. Along with these dangers, hikers may also come across other wild animals such as snakes, falcons, and even wasps.

The Durrance Route is the most popular climbing route.

Of all its trails, the Durrance Route is the most popular climbing route to the Devils Tower. Named after Jack Durrance, the American rock climber and mountaineer first used this route in September 1938. During his climb, he became the 2nd man to free climb the Devils Tower after Fritz Wiessner in 1937.a

It takes 5 to 8 hours to ascend and descend the Devils Tower.

On average, it takes 5 to 8 hours to go to and from the Devils Tower summit. The duration also varies depending on the trail and trekking method. For instance, the Durrance Route usually takes 4 to 6 hours to climb on foot. However, it would only take an hour or two to descend or rappel down from the summit.

The Devils Tower has damage left by early explorers.

Because of the modern types of equipment today, climbing the Devils Tower does not damage the rock in general. However, the early climbers of the Devils Tower left scars with their old rock climbing practices which can still be seen today.

Devils Tower is a magmatic rock formation that came from lava.

According to geologists, the Devils Tower isn’t a part of a volcano. Instead, it is an intrusive igneous rock that formed when the lava beneath the earth’s mantle gradually rose up between sedimentary rocks. Structurally, the rock formation of the Devils Tower largely resembles that of the Rocky Mountains from millions of years ago.