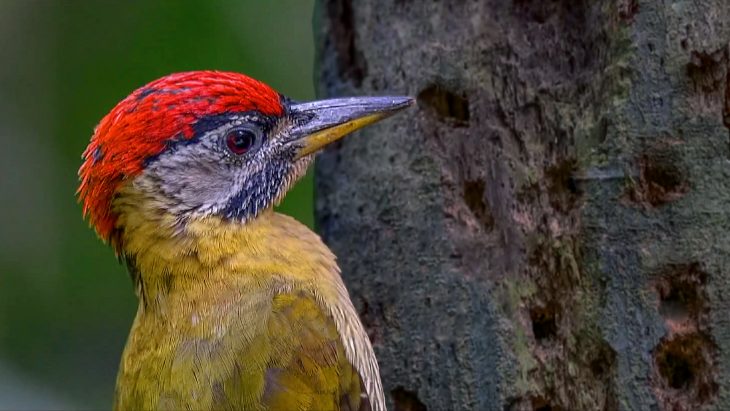 You probably notice different types of woodpeckers while visiting your yard now and then. The International Ornithological Congress acknowledges more than 200 species of woodpeckers across the globe. Around 23 types of woodpeckers reside in the United States and Canada. Woodpeckers are fairly popular with your neighborhood birdwatcher. These small birds can catch anyone’s attention with the hammering noises they make with their beaks.

You might have encountered a few species during trips around the country. They’re not that hard to miss. But, do you know about other species that might visit the tree in your backyard? Can you tell the difference between a Nutall’s Woodpecker and a Ladder-backed Woodpecker? Don’t fret! We’ve got your back. Get to know the types of woodpeckers with our informative list.

The Downy Woodpecker is another type of woodpecker that you’ll encounter in your backyard. It may not be as small as a Bee Hummingbird but most ornithologists dub the Downy Woodpecker as the smallest of their kind in North America. Their tiny size makes them more agile in hunting for food. Their diet mainly consists of insects such as Weevils and Powderpost Beetles. And just like the Hairy Woodpecker, the Downy Woodpecker likes to benefit from following other woodpeckers.

One of the types of woodpeckers with large populations in the US includes the Red-bellied Woodpecker. They adjusted to living in North America making their numbers expand throughout the continent. Their body is mainly made up of pale white feathers with recognizable grey, black, and white stripes on their wings and tail. The Red-bellied Woodpecker also has a distinct red tint on their head that extends to the back of their necks.

Read also: 40 Turtle Facts You Have To Know Now

One of the types of woodpeckers you can easily spot consists of the Red-headed Woodpecker. You can watch them in all their colorful glory when you travel to the central and eastern United States or southern Canada. It’s hard to miss the bright red color of their heads that extends to their upper breast. Red-headed Woodpeckers occasionally migrate in search of nuts. They also like to store their food in caches found in the crevices of trees.

The Nutall’s Woodpecker seeks refuge in the oak woodlands of California. You won’t spot them anywhere else since they prefer not to migrate to further places. You can tell them apart from other woodpeckers with the distinctive pattern of their black and white feathers. It may not seem like it but their diet mainly consists of insects. This type of woodpecker hunts for beetles, ants, and even termites once you spot them flying by.

Acorn Woodpeckers are one of the types of woodpeckers that barely leave their habitats. Their features closely resemble a clown’s makeup. True to their name, the Acorn Woodpecker hoards acorns. They then store the food they collected in holes that drilled by their beaks. This is especially helpful for them when they struggle to find acorns during winter. On that said season, the Acorn Woodpecker includes small insects, fruits, and seeds in their diet.

Just like the Ladder-backed Woodpecker, the Gilded Flicker mainly resides in the desert. They build nests by pecking holes in large Saguaro cacti. You can distinguish them with their tan-colored head, gray face, black oval-shaped bib, and black spots on the white feathers on their belly. Males, on the other hand, have a red stripe on their cheeks. They protect their nests by aggressively swinging their heads, opening their wings, and spreading their tails.

The Lewis’s Woodpecker got its name from Meriwether Lewis, an American explorer who noted the bird during one of his expeditions. Birdwatchers watch out for this woodpecker’s beautiful array of iridescent dark green feathers with silver and pink flecks. Meanwhile, ornithologists find these birds’ diets unusual. Unlike common woodpeckers, Lewis’s Woodpecker hunts for insects by swooping in on them like swallows. They rarely peck on trees for wood-boring insects.

Don’t mistake a Northern Flicker with a Gilded Flicker. You can find them in the eastern and western forests in the United States. Their features consist of light-brown feathers with patches of red on its head and the area near its beak. They also have a black bib-like shape on their chest. When hunting for food, Northern Flickers make use of their barbed tongues while pecking with their beaks for their meals. They’re also known for mostly eating ants compared to other birds from North America. Don’t get us wrong because they also eat fruits, nuts, and other insects. But, they just consume ants more than anything else in their diet.

Birdwatchers watch in awe whenever a Pileated Woodpecker whooshes through the skies. The bird’s beautiful bright red crest and pair of black-and-white wings mesmerize almost any birdwatcher or passerby. They’re quite noticeable as one of the largest types of woodpeckers in North America. When foraging for food, Pileated Woodpeckers aggressively tear apart ant nests and fallen logs since their diet mainly consists of eating ants and larvae of wood-boring beetles.

Golden-fronted Woodpeckers used to be hunted in the 20th century due to being considered as pests drilling on the holes of telegraph poles. Fortunately, this type of woodpecker managed to keep themselves from being extinct with their stable population growth. The recognizable red crown and yellow patch in between their eyes make Golden-fronted Woodpeckers stand out among other species. To search for food, these woodpeckers would inspect tree trunks with their beaks to find insects or eat a variety of nuts, seeds, fruits, and berries.

You may encounter the noisiness of Gila Woodpeckers around the desert shrubs of California or southern Arizona. Both males and females have noticeable black-and-white striped back and feathers with patches of white on their wings. This type of woodpecker prefers to raise their young in the nests they make after drilling holes inside Saguaro cacti. They mainly eat wild fruit and insects found near their cozy home. However, they’re also known for feasting on small lizards and babies of smaller birds.

Some people might mistake an American Three-toed Woodpecker for a toy. This type of woodpecker likes to stay quiet and motionless while perched comfortably on a tree. Their distinct set of toes sets them apart from other woodpeckers. This feature helps them remove barks from dead trees to find insects to eat. American Three-toed Woodpeckers live peacefully in conifer forests that have standing dead trees.

The striking colors of the White-headed Woodpecker contrast their silent behavior. They use their beaks to scrape away bark instead of drilling into wood or trees. These woodpeckers also prefer to carefully examine needle clusters in search of food. To spot one, you have to travel to mountainous pine forests in the western part of the United States. To set them apart from other birds, keep your eyes peeled for black-feathered woodpeckers with bright white heads.

One of the most recognizable types of woodpeckers is the Red-naped Sapsucker. You can watch out for them on your next visit to North America’s famous Rockies. Both male and female Red-naped Sapsuckers fascinate passersby with the bright red patches found on their heads and below their sharp beaks. These woodpeckers are well-known for having a sweet tooth for berries, fruits, and saps. They drill neat holes before feasting on the sugary sap of trees like willow, aspen, and birch.

The Yellow-bellied Sapsucker is the only type of woodpecker in North America that annually migrates its entire population every winter. They depart after breeding in the north and would travel further south to avoid the cold weather. Because of this, ornithologists seldom worry about the numbers of these barred black-and-white woodpeckers. To quench their appetites, Yellow-bellied Sapsuckers would drill small holes on tree barks and occasionally return to them to feed on the oozing sap. They also consume the insects that got attracted to the harvested sap.

Just like other low conservation woodpeckers, ornithologists worry over the habitat loss of the Williamson’s Sapsucker. The decline of conifer forests resulted in a massive loss of population for these unique woodpeckers. Back then, experts struggled to distinguish male and female Williamson’s Sapsuckers. Males feature a colorful mix of red, yellow, black, and white feathers while the females’ appearance looks more similar to the simple features of flickers. These woodpeckers feed on a variety of insects but mainly eat tree sap and fruits.

Several species of hummingbirds sometimes depend on the sap wells pecked by Red-breasted Sapsuckers. The sap from the drilled holes they leave behind becomes an additional food source for various animals. This colorful type of woodpecker managed to increase its numbers while residing in the northern Pacific Coast’s forests. Aside from feasting on sap, the diet of Red-breasted Sapsuckers also includes various insects and ants.

So, why do woodpeckers peck?

Woodpeckers mainly peck on trees for food or to create their nests. The aggressive drumming you sometimes hear comes from the bird’s goal of attracting a mate. The sound annoys most people especially if a nearby tree houses woodpeckers. It eventually becomes unbearable when it lasts for months. Avoiding rhythmic pecking proves difficult since most woodpeckers live in the same area for a whole year.

Kicking out woodpeckers from their territory is no easy task. You have to keep in mind that these birds are protected by most federal and state laws. You’ll be sent to prison even if you accidentally kill one while trying to keep them out of your property. Stick to safe methods of keeping woodpeckers out of your property for good.

To get woodpeckers out of your backyard, you must lure them out. First, deprive them of their sources of food. Get rid of their favorite insects found in your backyard by destroying insect nests. Then, block the woodpecker’s nest with metal or aluminum. This step keeps them from returning to their place of rest. Finally, completely repel woodpeckers from your home by scaring them off. Try to display life-like snakes or owls. If that fails, go ahead and purchase chemical-free woodpecker deterrents.