Uranus is a unique planet in more ways than one. For instance, it’s the only planet that rotates on its side, earning it the nickname “the sideways planet”. It’s also the coldest planet in the Solar System despite it not being the furthest away from the Sun. Although Uranus has recently become the butt of many schoolyard jokes, it’s a planet that holds many wonders. Take a closer look at the sideways planet with these Uranus facts.

Quick Facts
Essential Facts
Interesting Facts
Table of Contents
01 Uranus Facts Infographics
02 It rains diamonds in Uranus.
03 Along with Neptune, Uranus is an ice giant.
04 Uranus has the coldest temperature of any of the planets in the Solar System.
05 Uranus is the only planet that takes its name from Greek mythology.
06 William Herschel thought that Uranus was a comet.
07 Its name was originally Georgium Sidus.
08 Uranus orbits the Sun on its side.
09 Uranus has 13 faint rings.
10 The planet has 27 moons.
11 The moons of Uranus take their names after literary characters.
12 One of its moons has the tallest cliff in the Solar System.
13 Next to Saturn, Uranus is the second least-dense planet in the Solar System.
14 NASA only probed Uranus once.
15 Uranus’ magnetic field flickers on and off.
16 Its aurorae are far from the poles.
17 It would take years to travel from Earth to Uranus.
18 It rotates in a retrograde direction.
19 Uranus does not have a definite surface.
20 Each of its poles get 42 years of sunlight and 42 years of darkness.
21 A year on Uranus is equivalent to 84 years on Earth.
22 Uranian days are shorter than Earth days.
23 Uranus has a small, rocky core.
24 Its surface gravity is weaker than that of the Earth's.
25 Uranus and Neptune switched places 4 billion years ago.
26 Wind speeds in Uranus can reach up to 560 miles per hour.
27 Its atmosphere has three layers.
28 Uranus can be seen without binoculars.
29 Similar to Neptune, Uranus has a great dark spot.
30 The chemical element uranium takes its name after the planet.
31 Uranus could potentially be a mining site for helium-3. 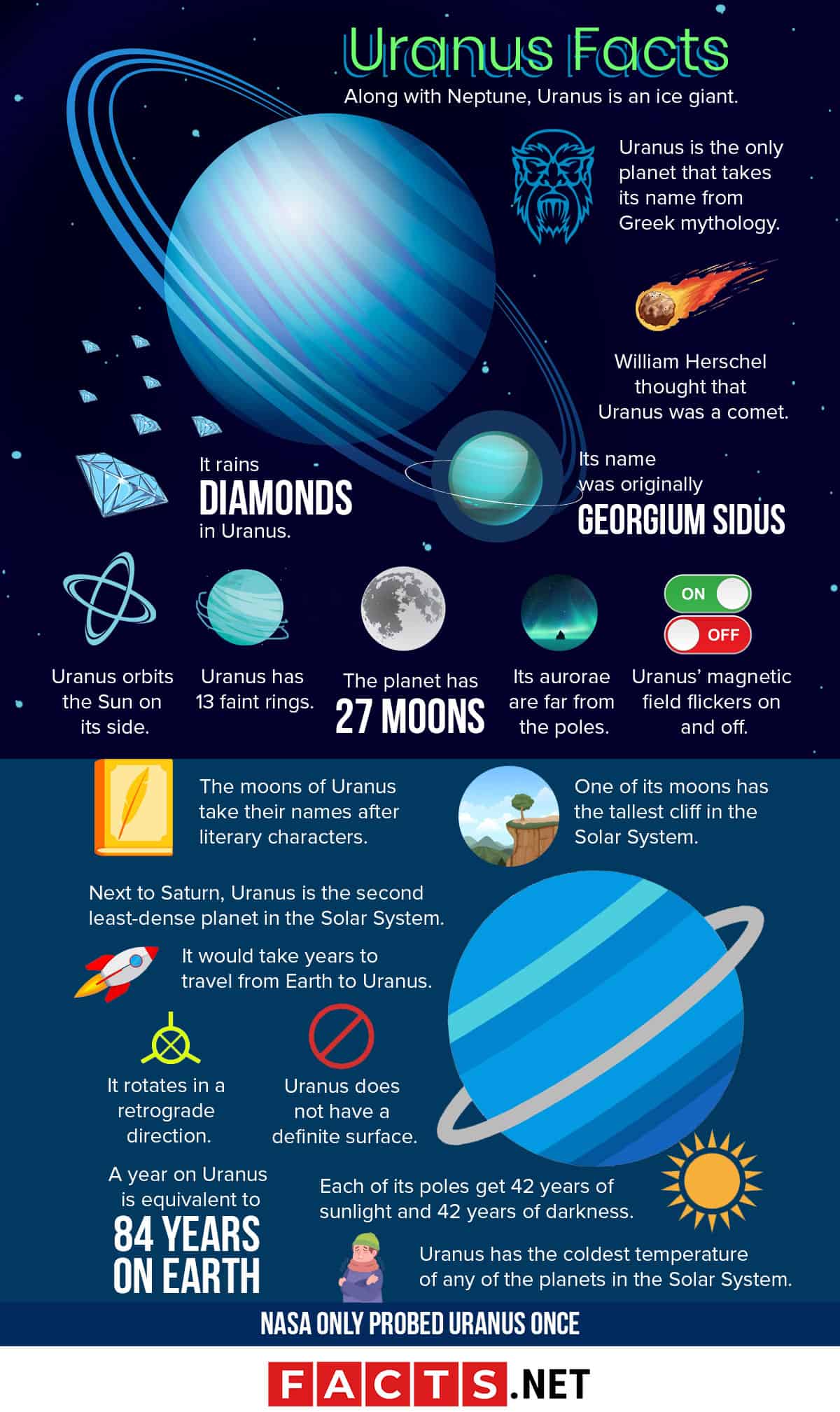 It rains diamonds in Uranus.

On Uranus, the planet’s constant pressure causes its atmosphere’s abundance of methane to break down. The resulting carbon atoms condense into diamond crystals that rain like hailstones through the planet’s mantle. Due to their similar conditions, the same phenomenon happens with Jupiter, Saturn, and Neptune.

Interestingly, scientists also suggest that the mantle of Uranus has an ocean of liquid diamond, with solid “diamond-bergs” floating around instead of icebergs. How’s that for amazing Uranus facts?

Along with Neptune, Uranus is an ice giant.

Uranus has the coldest temperature of any of the planets in the Solar System.

Uranus is the only planet that takes its name from Greek mythology.

The adjectival form of Uranus is “Uranian,” which is used to describe something related to the planet. Astronomers prefer to pronounce “Uranus” with a stress on the first syllable and a short “a” sound.

William Herschel thought that Uranus was a comet.

Upon his observation of Uranus in 1781, Sir William Herschel thought that Uranus was a comet or a star. Sharing his findings to other astronomers, Uranus’ odd movement and lack of a tail led them to believe that it was neither a comet nor a star.

It was only until the astronomer Anders Johan Lexell computed its orbit that Uranus got confirmed as a planet. Two years after its discovery, everyone agreed that Uranus was a planet.

Its name was originally Georgium Sidus.

When he first discovered Uranus, William Herschel had the honor of naming the heavenly body. Herschel named it Georgium Sidus, Latin for “George’s Star”, or the “Georgian Planet.” to honor his patron, King George III. However, King George III was not popular outside of Britain.

Thus, others suggested alternative names such as Herschel, Neptune, and even Neptune Great Britain. It wasn’t until 70 years after its discovery that the name Uranus, proposed by Johann Elert Bode, became universally accepted.

Uranus orbits the Sun on its side.

One of the Uranus facts that you can’t miss is that it orbits the Sun while rotating on its side, earning it the nickname “the sideways planet.” Uranus’ equator stands nearly at a right angle from the plane of its orbit, making it appear to rotate on its side. This odd planet has an axial tilt of 97.77 degrees. While still unconfirmed, many astronomers explain Uranus’ tilt as the result of an Earth-sized protoplanet crashing into Uranus when the Solar System first formed.

Although Uranus appeared nearly featureless when Voyager 2 photographed it, Uranus actually has 13 distinct rings that surround the planet. The brightest ring is the epsilon ring, with all but two rings only measuring a few kilometers wide. Scientists suggest that the rings formed due to parts of moons that have been shattered over time.

The planet has 27 moons.

Uranus has a total of 27 moons, which are classified into three groups: 5 major moons, 9 irregular moons, and 13 inner moons. Interestingly, some moons show signs of volcanic activity and canyon formations.

The five major moons of Uranus are Ariel, Miranda, Oberon, Titania, and Umbriel. Of all these moons, Titania is the largest, spanning 980.5 miles (1,578 km) in diameter. While it measures less than half of Earth’s moon, Titania remains the eighth-largest moon in the Solar System.

The moons of Uranus take their names after literary characters.

William Herschel discovered the Uranian moons Titania and Oberon in 1787, but the said moons did not receive their names until the year 1852. William’s son, John Herschel, took the liberty of naming the Uranian moons. Instead of opting for the conventional names derived from Greek mythology, Herschel named them after spirits in English literature—mostly the works of William Shakespeare and Alexander Pope.

One of its moons has the tallest cliff in the Solar System.

Uranus’ moon, Miranda houses the tallest known cliff in the Solar System. Called Verona Rupes, the cliff stands around 12 mi (20 km) high. Since Miranda’s gravity is relatively low, it would take a person around 12 minutes to fall from the top of the cliff to the bottom, at a speed of around 124.27 mph (200 km/h).

Next to Saturn, Uranus is the second least-dense planet in the Solar System.

Although Uranus is large, it packs a relatively small amount of mass. It has a density of 1.27 g/cm3 and is the second-least dense planet in the Solar System, next to Saturn.

NASA only probed Uranus once.

Uranus’ magnetic field flickers on and off.

Its aurorae are far from the poles.

Similar to other planets, Uranus also experiences aurorae, much like our own Northern Lights. However, Uranus’ aurorae appear farther from the planet, since its magnetic poles lie further apart.

It would take years to travel from Earth to Uranus.

Since the solar system is always in motion, the distance between Earth and Uranus changes constantly. Generally speaking, Earth and Uranus could be as close as 1.6 billion miles (2.6 billion kilometers) and as far as 1.98 billion miles (3.2 billion km) apart. For one, it took NASA’s Voyager 2 spacecraft around nine and a half years to get to Uranus since its launch from Earth.

It rotates in a retrograde direction.

Uranus rotates sideways, but it also rotates in a retrograde direction, similar to Venus. Looking at its north pole, both Uranus and Venus rotate in a clockwise motion instead of counterclockwise like all the other planets.

Uranus does not have a definite surface.

Similar to gas giants, the ice giant Uranus is mostly composed of fluids with no definite solid surface. However, a spacecraft would be unable to land on the planet because of its immense pressure.

Today, scientists can only distinguish between the atmosphere of Uranus and its surface by determining its pressure. As long as a given area’s pressure exceeds one bar (the pressure of Earth at sea level), they would count it as the planet’s “surface.”

A year on Uranus is equivalent to 84 years on Earth.

Uranus takes about seven years to pass through each of the zodiac constellations. The planet orbits completely around the Sun once every 84 Earth years. Since William Herschel’s discovery of the planet in 1781, it has revolved around the sun twice and is bound to complete its third orbit in 2033.

While it revolves at an extremely slow rate, Uranus rotates at a rather quick pace. In total, the interior part of Uranus completes a full rotation at about 17 hours and 14 minutes.

Uranus has a small, rocky core.

According to the standard model of Uranus’ structure, the planet has three layers: an outer envelope composed of hydrogen and helium, an icy mantle, and a rocky core. Comprising around 20% of the planet’s radius, the planet’s core mostly consists of silicate and iron–nickel alloys.

Its surface gravity is weaker than that of the Earth's.

In the Solar System, Neptune is the planet that lies farthest from the Sun, followed by Uranus. However, it wasn’t always this way. According to recent models, Uranus and Neptune actually switched places about 4 billion years ago.

Wind speeds in Uranus can reach up to 560 miles per hour.

Although Uranus looks plain compared to the other giant planets, it still experiences interesting weather conditions. As a windy planet, Uranus experiences different flows of wind throughout its surface, reaching speeds up to 559 miles per hour (250 m/s; 900 km/h). In comparison, the highest recorded surface wind speed on Earth only reached 320 miles per hour (142 m/s; 510 km/h)—and that was because of a tornado.

Its atmosphere has three layers.

The atmosphere of Uranus has three distinct layers: the troposphere, stratosphere, and thermosphere. The troposphere is its innermost layer, while the thermosphere is the outermost level. Unlike the Earth, Uranus does not have a mesosphere.

Uranus can be seen without binoculars.

Along with Mercury, Venus, Mars, Jupiter, and Saturn, you can also see the planet Uranus with the naked eye. With an apparent magnitude of +5.7, Uranus is relatively dim compared to other objects in the sky, but it is visible on dark, clear nights.

Similar to Neptune, Uranus has a great dark spot.

When Voyager 2 photographed Uranus, it was almost featureless, appearing mostly as a pale blue ball against the darkness of space. However, the probe did detect a great dark spot on its surface.

This dark spot is the result of churning winds in the atmosphere of Uranus, spanning 1,100 miles (1,770 km) by 1,900 miles (3,058 km). If you have a hard time picturing that, this vortex is large enough to cover two thirds of the United States.

The chemical element uranium takes its name after the planet.

In 1789, the German chemist Martin Klaproth discovered the chemical element Uranium and named it after the planet Uranus. Prior to the element’s discovery, Herschel discovered the planet just eight years before.

Uranus could potentially be a mining site for helium-3.

Although atmospheric mining has never been done before, scientists plan to mine valuable gases such as hydrogen and helium from the atmospheres of extraterrestrial planets.

One of the best candidates for mining helium-3 is Uranus, which has a small gravity well and an abundance of the material. Helium-3 is an isotope of helium that can be used for cryogenics, medical imaging, and nuclear propulsion.