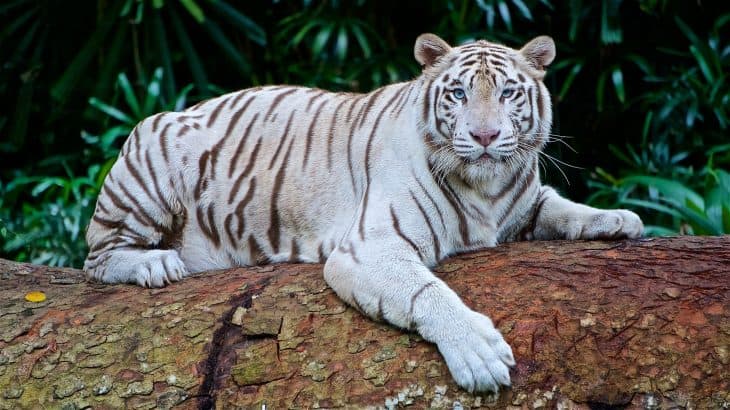 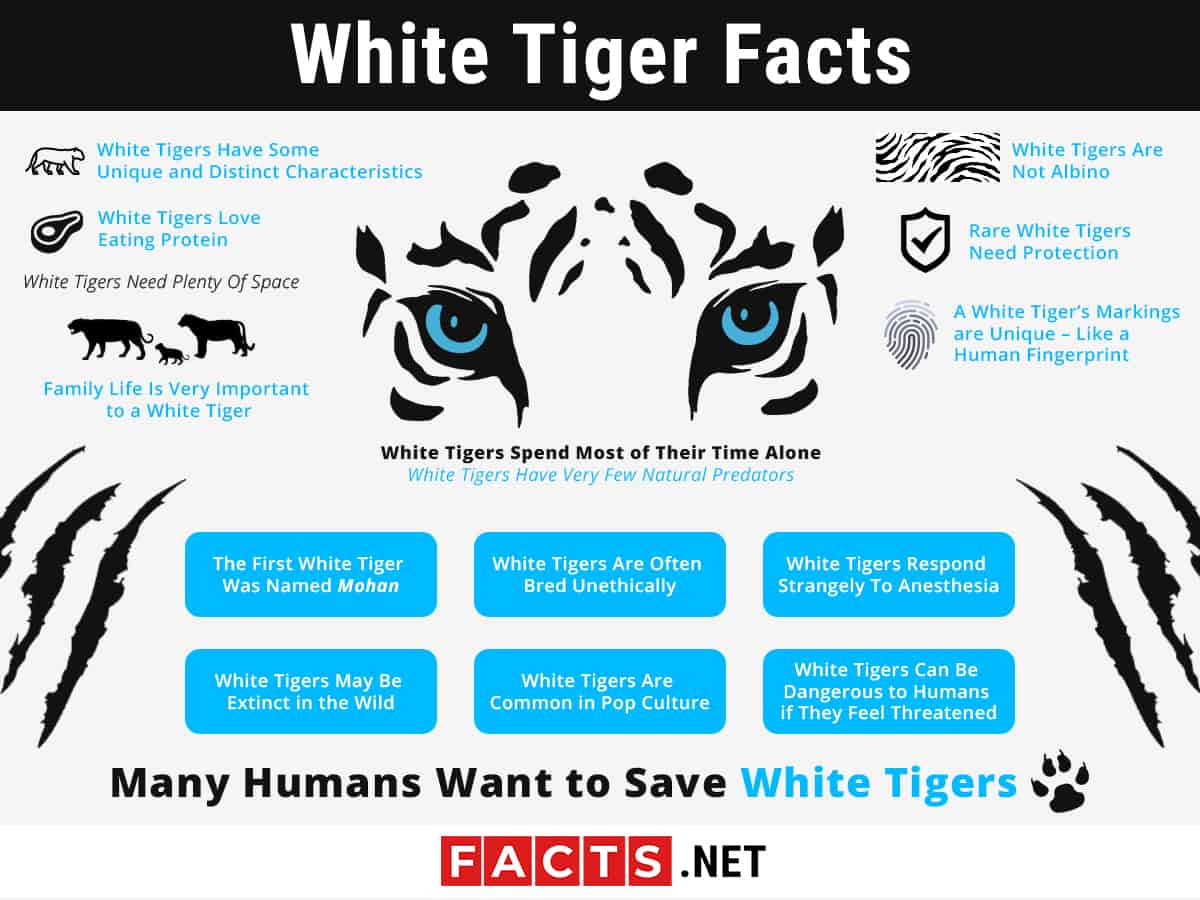 White Tigers Have Some Unique and Distinct Characteristics

White tiger facts show us how these beautiful tigers have more unique characteristics when compared to other tigers than just the color of their fur. They are of course a majestic white shade with black stripes but they also have a distinct pink nose and blue eyes. They are often much larger than other tigers, both at birth and as they mature. A white tiger is usually considered to be an adult tiger between two and three years of age.

White Tigers Are Not Albino

It is a common misconception that white tigers are simply albino versions of Bengal tigers. If they were, then they would not have any pigment, resulting in an all-white coat without stripes, and pink or red eyes. Bengal tigers are the only subspecies that come in different colors. The white color though is incredibly rare, which is why there are so few white tigers in the wild today. For a white tiger to be born, both parents must carry an unusual gene. This only happens naturally about once in every 10,000 births.

According to white tiger facts, these animals are carnivorous hunters. They hunt both on land and in the water, and they are great swimmers. White tigers are able to take on prey that is larger than they are, and can even bring down an animal that weighs close to a ton. They prey on a wide variety of animals, including monkeys, birds, wild cattle and deer. A white tiger will only hunt every few days so when it does secure a meal, it will feast until its stomach is completely full.

A white tiger needs 20 square miles in the wild in which to roam, live and hunt. This large amount of space will ideally provide enough prey for the tiger. While rare, a white tiger in the wild would usually be found in Southeast Asia and in some parts of India, in forests and grasslands. The area that white tigers reside in needs to offer plenty of cover so that the white tiger can hunt efficiently. An orange tiger is able to blend into scenery with ease compared to a white tiger.

Family Life Is Very Important to a White Tiger

White tiger facts show that raising cubs is very important to white tigresses. A white tigress is sexually mature at about three years of age. After successful mating, a tigress is pregnant for about three and a half months. On average, three or four cubs are born. Larger litters can occur, but usually at least one cub will die. The cubs depend on their mother until they are a year and a half old. They can then hunt for themselves but will remain with their family until they are two or three. They will then break away from their family and live a life of solitude.

Many zoos around the globe have white tigers, and these exhibits can certainly attract plenty of attention and lots of visitors. While it does happen, breeding these tigers in zoos is frowned upon and many zookeepers elect to have the tigers spayed or neutered to prevent breeding from occurring. White tiger facts show that in the wild, illegal poaching is all too common, as the white coats can fetch a high price on the black market. Whether they are in captivity or in the wild, there are many programs in place that serve to protect white tigers from illegal hunting or improper living conditions.

A White Tiger’s Markings are Unique – Like a Human Fingerprint

One of the more interesting white tiger facts involves their famous stripes. A tiger’s stripes can be compared to a human’s fingerprint. Each tiger’s stripes are different than any other tiger’s. They are also not just fur deep. If you were to shave a white tiger, you would see that the stripes would be present on their skin as well. While even rarer, it is possible for a white tiger to not have stripes. In 2004, a stripe-less tiger with blue eyes was born in Spain to two normal orange Bengal tigers.

White Tigers Spend Most of Their Time Alone

White tigers are solitary animals, like many other large cats. They typically spend most of their day relaxing or sleeping. In the early evening hours they may roam their territory to make sure that another tiger isn’t encroaching on their space. They will then spend the night hunting for their prey by waiting patiently in brush or grass. White tiger facts tell that these animals have amazing hearing and sight, which helps them navigate through the dark jungle. White tigers only join up with other tigers when it is time to mate.

In a natural environment, the white tiger has no predators. This is mostly thanks to their large size and fierce nature, according to white tiger facts. Like many other large cats, white tigers in the wild are mainly threatened by humans. They are hunted for their coat but they also suffer because of the lack of available space. As deforestation reaches their territories, the tigers are forced to find new space and often are unable to secure prey. The white tiger is threatened even more than many other animals because the birth of one in the wild is so rare.

There are documented reports of white tigers in the wild that date back to the 1800s. The first to be captured was caught in India in 1951 by Maharaja Martand Singh, who was the ruler of the state of Rewa at the time. The tiger was named Mohan and was exclusively used to breed more white tigers. While it has yet to be proven, some tiger experts believe that all white tigers in the world today can trace their ancestry back to Mohan.

Zoos, circuses and private owners can make large sums of money with their white tigers. Because they are so rare, these businesses often take to inbreeding the tigers to ensure that the cubs they bear are of the white variety. This is unethical and dangerous, as newborn cubs often suffer from birth defects and health problems. They can have crossed eyes, deformed spines and are often more susceptible to illnesses and diseases. These problems become more common as the inbreeding continues through each new generation.

In 1992, a male white tiger named Cheytan passed away at the Cincinnati Zoo after being administered anesthesia for a simple root canal therapy. This was not the first time that a white tiger was negatively affected by the drug. White tigers share a trait with albinos and can undergo a re-sedation effect when administered other types of sedatives. This is a serious problem for white tigers, especially since many are prone to certain health problems that can benefit from procedures that require them to be sedated.

White Tigers May Be Extinct in the Wild

White tiger facts show that there have been many instances of books, games, television shows and other artistic outlets that have included references to white tigers. In Disney’s 101 Dalmatians, the live action version, Cruella de Vil kills a white tiger for its coveted white fur. Power Rangers, a children’s favorite television series, includes a White Tiger character. Tigatrom is a character in the animated TV series Transformers: Beast Wars that is based on the white tiger. White tigers have been featured on album covers, book covers and in music videos.

White Tigers Can Be Dangerous to Humans if They Feel Threatened

In June of 2015, catastrophic floods led to the escape of several animals from a zoo in Georgia, Africa. Among the escaped animals was a white tiger. The animal hid in a warehouse and was taken by surprise when an employee entered. The tiger attacked the man and bit his throat. Doctors were unable to save the man and local authorities were forced to hunt the tiger and put it down. The tiger was so dirty from the flood water that it was at first believed to be a lion.

Many Humans Want to Save White Tigers

One of the more emotional tiger facts tells the story of a female white tiger in Delhi Zoo. Her name is Kalpana and she gave birth to six white tiger cubs in early 2014. For some reason, the tigress rejected her cubs and although the zoo did all that they could, five did not survive. The sixth cub was placed in a care program by the zoo and received around the clock care. This is just one example of how humans will go above and beyond to keep these tigers safe. 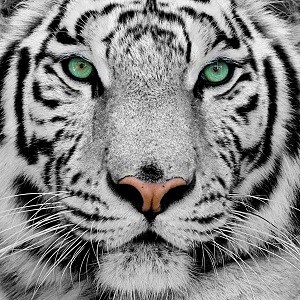 White tiger facts focus on this stunning animal and the challenges that surround its uncertain future. Learn about what needs to happen in the reproductive process for a white tiger to be born. Discover how experts are uncertain if there are any white tigers left in the wild. These facts also go into detail about how a white tiger would live in the wild, including its habitat, reproductive patterns and what its diet consists of. Explore the world of white tigers and see what is being done to keep these tigers healthy and present in the animal world.