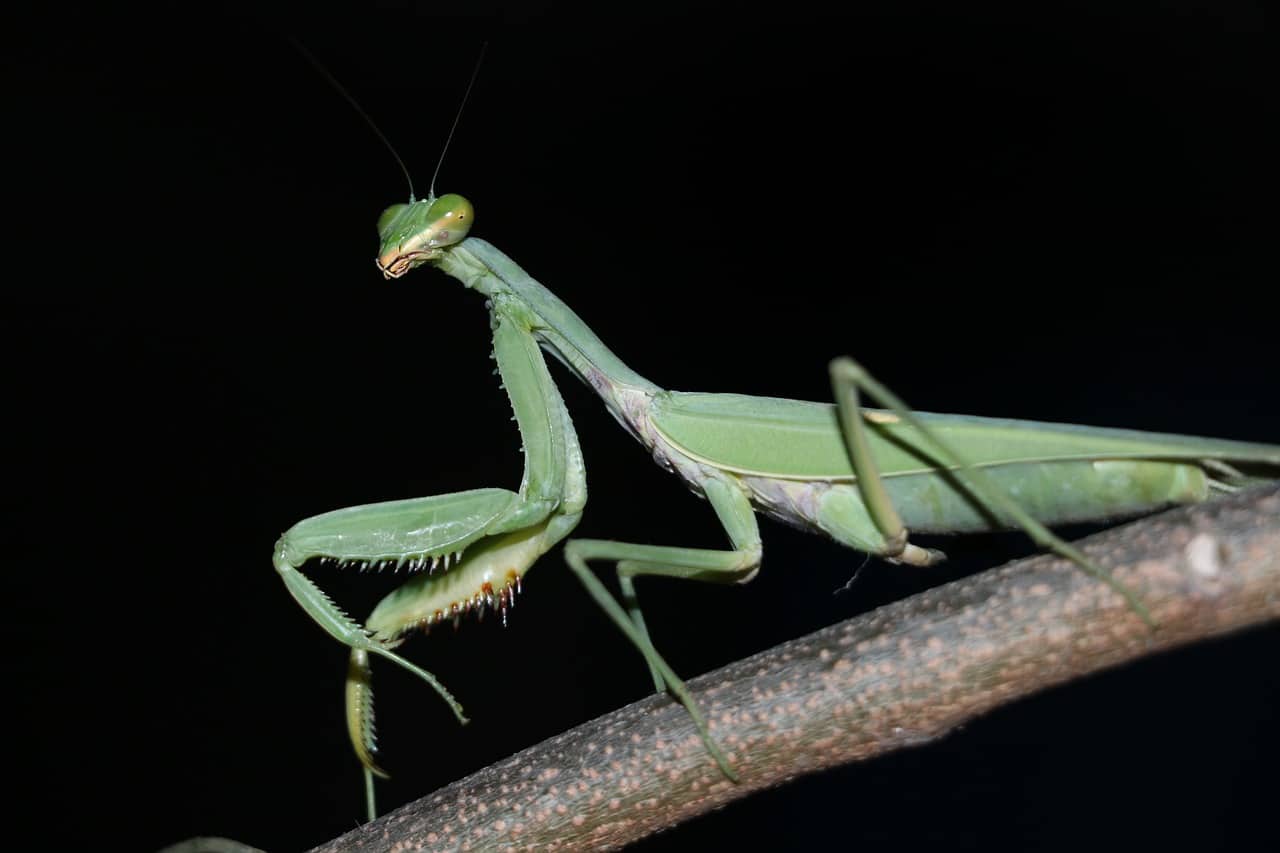 When judged solely on its name, the praying mantis can easily give the wrong impression. It might as well have its name converted to ‘preying mantis’ due to its predatory nature. However, what else is there to this animal? Find out the real deal behind this insect with these interesting praying mantis facts.

The praying mantis got its name from its prominent legs.

As the name suggests, the mantis religiosa has legs that bend and fold together in a prayer-like position. The praying mantis uses its front legs to grasp and capture its prey.

Praying mantis is the only insect that has stereo-vision.

This means that the mantis can look at the same spot with both eyes, which lets it determine distances more accurately.

The praying mantis has a weak sense of hearing.

While it has advanced eyesight, praying mantises can’t hear like most insects do. Instead, a praying mantis can only sense vibrations. This carnivorous insect has an “ear” in the middle of their abdomen which can even sense a bat’s high-pitched tones.

The praying mantis habitat is more common in warmer regions.

These locations are usually along tropical and subtropical latitudes. While tropical rainforests serve as home to most praying mantis species, they can also live in deserts, grasslands, and meadowlands.

Some praying mantises can fly.

It depends whether it has wings or not as most adult praying mantises do. Usually, females can’t fly, while males can.

A praying mantis bite is not poisonous.

This insect has no known venomous species and is typically uninterested in humans. Instead, praying mantis uses the spikes on its forelegs to protect itself. Also, it does not have any stingers.

The varying looks of praying mantises can serve as camouflage for protection.

Some species have distinct body shapes that make the insects look like branches, flowers, or leaves. The most common praying mantis color is green, but it can range from brownish colors and tones to camouflage its body among its environment.

Other praying mantis symbolism includes awareness, balance, calm, creativity, intuition, mindful, and patience. Moreover, these traits make the mantis a symbol of contemplation and meditation. China has since honored the praying mantis for its mindful movements.

These stages are the egg, nymph, and adult. Praying mantis cocoons grow bigger during molting into the exoskeleton. The molting stage can repeat 5-10 times before reaching the adult stage, depending on the species. After the final molt, the wings on most species appear, while some remain wingless.

Praying mantis mating can turn deadly for the males.

The adult female praying mantis has a reputation for eating its mate after or during mating. Still, this behavior is not enough for the species, especially the males, to refrain from reproducing. Contrary to popular belief, cannibalism in mating mantises doesn’t happen all the time, either.

When the nymphs hatch, they look much like tiny versions of their parents.

On the other hand, eggs of larger species take 4-6 weeks to hatch. Nymphs may have different colors from the adult. Also, their early stages often mimic that of ants.

Several records of praying mantis eating a hummingbird have been subject to research.

In all of the 147 reports of the case, data shows that 12 different praying mantis species preyed on 24 different bird species. Out of these bird species, 7  were hummingbirds. Around ⅔ of the birds suffered bites on the head, neck, or throat. Moreover, several cases showed the insect had chewed a hole in the victim’s head where it extracted its brains.

The flower mantis has a body that mimics flowers.

It sports a coloration that is an excellent example of aggressive mimicry as it forms a camouflage that can lure prey. For example, the brilliant coloring and camouflage structure of the orchid mantis mimics parts of the orchid flower.

The Chinese mantis has a distinct brown slender body.

These species have been known to reside in China, Japan, Korea, and Thailand, keeping to habitats with the ideal temperature of around 20-38 °C. They can grow up to 5 inches long.

The Carolina mantis is highly regarded as a gardener’s best friend.

The state insect of South Carolina consumes huge quantities of pests that can damage or destroy flowers and crops. Still, the Carolina mantis primarily resides in North America and often comes around street lights at night. This specie grows up to about 2 inches long.

The European mantis is regarded as the archetype of a mantis.

While its main color is light green, it also has little variation in color tone. Their importation from Europe to America in the 1600s was for the goal of combating plant pest insects. What sets this species apart from the others is its distinctive pattern inside the front legs.

The color of its body yields essential camouflage which also enables them to blend with its environment. Sometimes, the mantis needs to mimic other color tones. Hence, the praying mantis becomes invisible for both the predators and the prey.

The white praying mantis is more like a phase.

After each molt that nymphs go through before reaching adulthood, praying mantis turns pure white and looks like an albino. Still, this phase of the white praying mantis only lasts briefly and soon darkens into green or brown.

Ark mantis refers to a creature in the ARK: Scorched Earth expansion pack.

Also known as the Empusa or Mantis, it has a key difference from its real-life counterpart. In the game, the insect has a strange aggressive behavior towards humans where the praying mantis pursues them even from a far distance just to kill them.