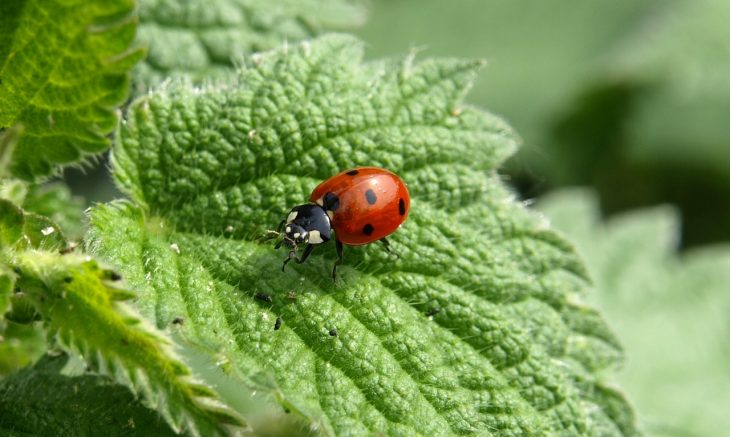 We consider the ladybug to be one of the world’s most visually appealing insects. We also consider the ladybug useful to humans and the environment. This is because they consume many insects each day. These insects are often pests that feed on plants and important crops. Ladybugs are beneficial to humans because they lessen the number of pests around the area. Ladybugs can also live in several types of environments such as grasslands, cities, suburbs, and many more. Have we got you curious now? Find out more about these attractive little beetles with our collection of ladybug facts.

Quick Facts
Essential Facts
Interesting Facts
Table of Contents
01 On average, a ladybug eats up to 5,000 insects during its lifetime.
02 In 2010, a team of scientists discovered the sounds that ladybugs make.
03 In many cultures, the ladybug is considered to be a sign of good luck.
04 Ladybugs are only poisonous to animals and other bugs when they are consumed.
05 In some parts of England, the ladybug is also known as a bishop.
06 The hard shell of a ladybug helps in protecting its organs.
07 It was once believed that the spots on the back of a ladybug would indicate its age.
08 Some eggs that are laid by the ladybug are meant for the babies to eat once they hatch.
09 Much like many other animals and insects, the ladybug also hibernates during winter.
10 The Oxford dictionary states that the ladybug is named after the Virgin Mary.

On average, a ladybug eats up to 5,000 insects during its lifetime.

We consider ladybugs to be highly beneficial to humans as they act as a free form of pest control for plant life and other crops. On average, a ladybug will consume over 5,000 insects in its lifetime. This is equivalent to around 500 insects each month.

Additionally, scientists have also found that ladybugs could save hundreds of crops each year from common pests in the United States. This is also thanks to the abundance of these insects found in the country. Apart from plant-eating insects and pests, ladybugs also consume aphids. Aphids are soft-bodied insects that commonly harm crops and other plants found in the wild. Ladybug facts important to farmers everywhere!

In 2010, a team of scientists discovered the sounds that ladybugs make.

In a study conducted by Clarkson University in 2010, scientists successfully recorded the faint noises that tiny insects such as ladybugs and similar insects make. The head scientist of this project, Igor Sokolov, accomplished this by the use of atomic force microscopy. This method was used to record sub-nano oscillations of extremely faint noises. They categorized these noises to be less than an amplitude of a single atom at high frequencies.

This tool is also similar to that of a normal stethoscope. Scientists made use of a small probe on the device and placed it on each insect to record its sounds. The aim of the study hopes to discover the many unknown features and as well as the physiology of insects which could help in finding solutions for problems caused by different species of insects. Cool ladybug facts!

In many cultures, the ladybug is considered to be a sign of good luck.

We can trace the remnants of these beliefs back as far as ancient times. During this period, many superstitions regarding these insects began. In France, they believe the ladybug can cure the ailments of a person. It would grant this healing effect if a ladybug lands on them when they are sick or feeling unwell.

Similarly, in Belgium, good luck comes from the ladybug when it crawls across the hand of a lady. When this occurs, Belgians believe it to be a sign that she will get married sometime shortly after this encounter. While there are many stories and beliefs regarding the luck that a ladybug can grant you, there are also superstitions that state that a ladybug can bring bad luck. Such as ladybugs placing a curse on the person if they harm it intentionally or try to kill it. Superstitious ladybug facts!

Ladybugs are only poisonous to animals and other bugs when they are consumed.

When threatened by a predator, the ladybug has a known defense mechanism referred to as the ‘reflex bleeding’. When this is activated, it exudes an alkaloid toxin found in its body through the joints of the exoskeleton. This defense mechanism is triggered by mechanical stimulation such as predator attacks. This can also occur in both its larval and adult stage of its life. When predators attempt to eat them, they can be poisoned regardless of the ladybug’s stage in life.

Additionally, the shell of a ladybug is also used as a camouflage technique where it can blend in with plants and other surfaces. This allows the ladybug to hide from its predators. Common predators that these insects often face are animals such as birds and frogs, and other insects such as spiders, wasps, and dragonflies.

In some parts of England, the ladybug is also known as a bishop.

British ladybug facts! While the exact reason is yet to be discovered, it commonly refers to the ladybug as a bishop. There are also many other different variants of the name depending on the location in England. These variants include ‘the amazing bushy bishy barnabee’, ‘our lady’s bird’, ‘ladybird’, and also ‘lady beetle’.

Somewhere around 2003, the ladybug population in England was also noticed to have significantly shifted because of environmental issues. Since then, ladybugs that live in parts of England can typically be found in several areas with relatively warmer and damper conditions to aid in their survival as these insects also feed on mildew found growing on damp organic material such as plants.

The hard shell of a ladybug helps in protecting its organs.

All species of ladybugs have a large and rounded protective shell on their backs to protect its fragile wings when it is not in flight. This protective shell is also called the elytra, where it is also considered to be a type of changed forewings as they can open and close on command when a ladybug takes flight or lands on surfaces.

It was once believed that the spots on the back of a ladybug would indicate its age.

After some time, scientists have discovered why spots occur in the shell of ladybugs. According to research, this is because of the genetics of the insect and are determined by its species. As the ladybug grows and develops from its larval stage, the pattern emerges slowly. Once this stage occurs, the vivid color of the insect will brighten within a few days.

Research has also shown that the color on the shell of a ladybug typically shows to be fuller. This color is also darker in shade than the color of the callow. Currently, there is no confirmed method of how to determine the age of a ladybug. This may be due to how short their average lifespan is.

Some eggs that are laid by the ladybug are meant for the babies to eat once they hatch.

After they have finished mating, the female will lay around 10 to 50 eggs on the underside of a leafy plant. These plants typically contain a source of food for when its children hatch. Typically, this is done on a plant with a prime source of aphids on it.

Once the eggs are ready to hatch, not all of them will survive. Instead, some of these eggs serve as extra food for the others to survive. Ladybugs can mate multiple times during the spring and summer. Additionally, the female can also lay up to one thousand eggs throughout each mating season.

Much like many other animals and insects, the ladybug also hibernates during winter.

Research shows that ladybugs remain active until the fall or when the local weather turns cold. During this time, these insects look for a warm place to hibernate. These places include the inside of rotting logs, underneath rocks, or even inside human homes where they hibernate in colonies.

During the winter, a colony of hibernating ladybugs can have over a thousand individual members. These members will all come out together once the weather becomes less cold and spring begins. The reason for its large hibernating groups is to allow them to huddle up together to insulate heat. This allows each of them to keep from freezing and dying during the cold months of winter.

The Oxford dictionary states that the ladybug is named after the Virgin Mary.

Here’s some… holy ladybug facts. The Oxford English Dictionary notes that the ladybug’s first gained name was about the Virgin Mary. It also considers this name to be the same as that of the Virgin Mary mentioned in the Christian religion. According to the dictionary, the name was given as a reference to the 7 spots on its shell. They believed these spots to be a symbol of the seven sorrows that the Virgin Mary had suffered.

Over time, many other variations of the name had been used to refer to the beetle. However, the term ladybug had become the most well-known and used around the world.