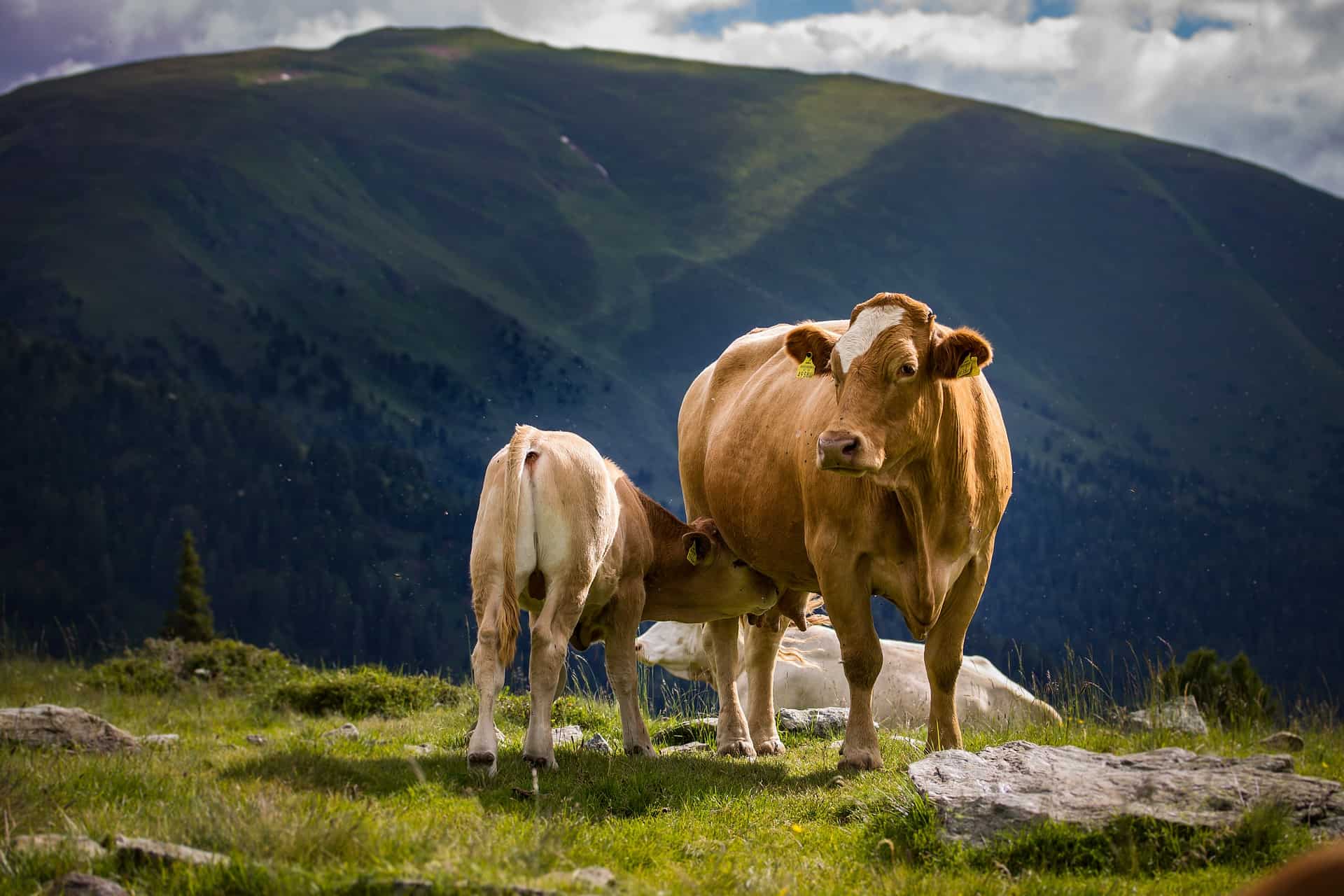 Quick Facts
Essential Facts
Interesting Facts
Table of Contents
01 Cow Facts Infographics
02 Cows Only Have 1 Stomach
03 Cows First Came to the United States in 1493!
04 You Can Tell How Old a Cow Is by Counting the Rings on its Horn
05 Cows Display Emotions Like Humans Do
06 Cows Have Panoramic Vision
07 A Cow’s Sense of Smell Is Superior to Other Animals
08 Indian People Believe Cows are Sacred
09 Cows are Surprisingly Expensive
10 Cows Lie Down to Sleep
11 Walt Disney Made a Famous Cartoon Cow
12 Cows are Colour Blind!
13 Wow! Humans Share 80% of Our Genes with Cows
14 Cows Drink a Bathtub Full of Water Each Day
15 Cows Can Walk Up Stairs, but Not Down Them
16 A Cow Once Flew in an Airplane!
17 Cow Facts – Facts About Cows Summary 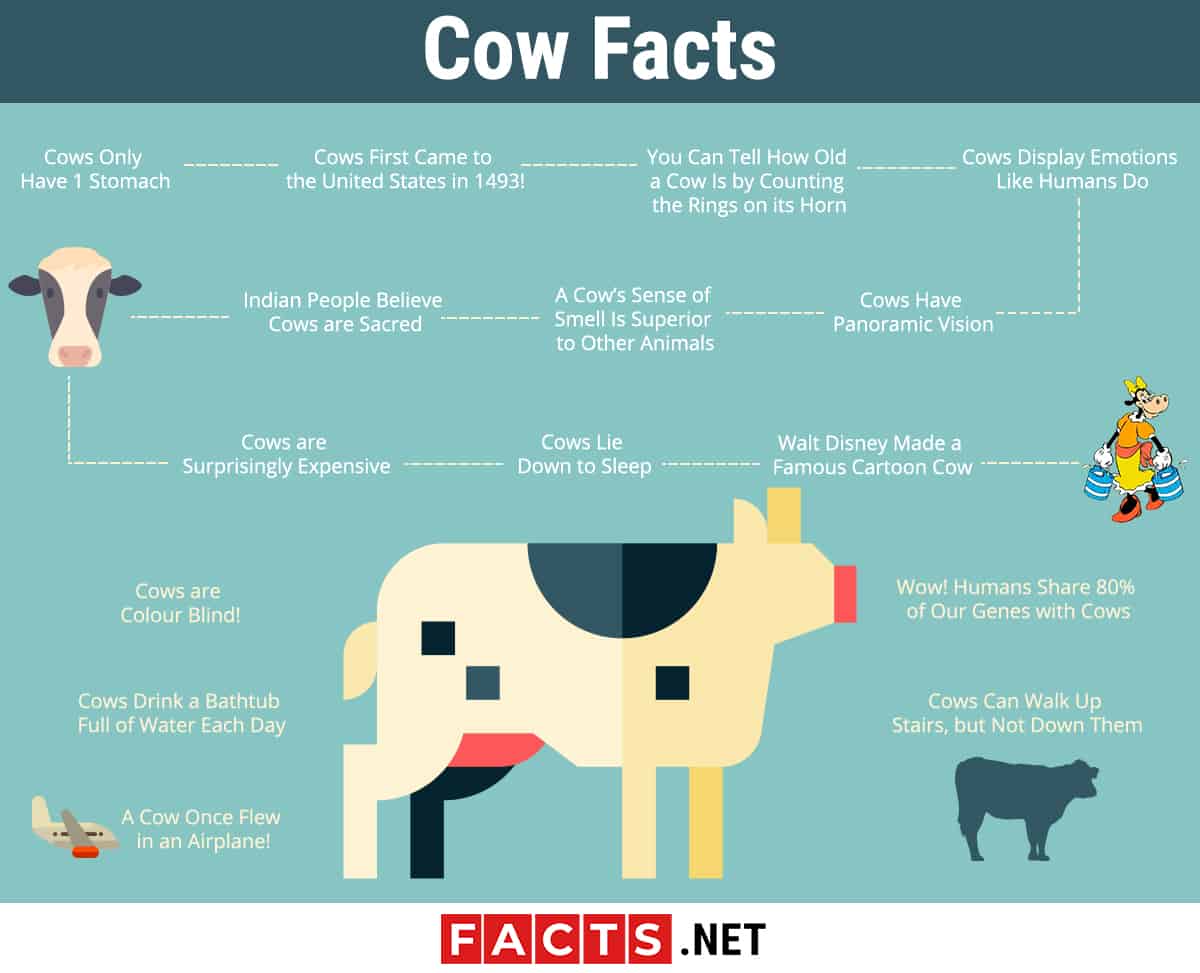 Cows Only Have 1 Stomach

The first of our brilliant cow facts dispels a popular myth about the animal. We’re often taught that a cow has 4 stomachs, but this isn’t true. In actual fact, the cow only has 1 stomach but it has 4 separate chambers. They are called the rumen, reticulum, omasum and abomasum. These chambers allow them to eat tough plant material that would otherwise be too difficult to digest, such as different types of grasses. Cows are known as ruminant animals and they will often regurgitate the plant matter they eat to make it even easier for them to digest fully.

Cows First Came to the United States in 1493!

Christopher Columbus brought cows to the United States as part of his second voyage in 1493, alongside other livestock including horses and sheep. He set off on this trip from the port of Cadiz in Spain and, after this time, European settlers to the US brought over various different breeds of cattle when they arrived. Until 1850 the dairy industry in the US revolved entirely around the domestically bred cow. It wasn’t until the mid-1900s, when bacteria and pasteurisation became more widely understood, that a proper breed association for cattle was set up to select and control breeds of cattle to produce safe milk.

A cow can live for anything up to 15-20 years. Dairy cattle and cattle raised for meat won’t live anywhere near as long as this (in fact, a cow bred for meat will be lucky to make it to the age of 2). However, cattle that live longer can have their age mapped by simply counting the rings they have on their horns – if you can find one and get it to stand still long enough (or you don’t get scared and run off!).

Don’t get on the wrong side of a cow, or upset it. The next in our series of cow facts tells us that this is an animal which can bear a grudge and show real emotion if it’s disturbed. Cows tend to form close friendships with around 2 to 4 other cattle in their group, and are known to be hostile towards humans they take a dislike to – or who perhaps disturb their group in some way.

A cow’s field of vision is almost 360 degrees – making it the perfect animal to try and sense predators who may come at it from any direction. Cows can also hear sounds at much higher and lower frequencies than humans can, which makes them even more capable of sensing attack.

A Cow’s Sense of Smell Is Superior to Other Animals

Compared to other livestock, a cow has an unrivalled sense of smell. In fact, cows can detect odours up to 5 miles away from wherever they are. This makes them highly capable of sensing danger or attack, especially when coupled with their superior vision and hearing. We don’t typically think of cows as being so highly developed, but this really is a very sensory animal.

The next of our cow facts tells us that Indian people believe the cow to be sacred. In fact, in some states across India, slaughter of cattle is entirely prohibited. Mahatma Ghandi said of the cow: “I worship the cow and I shall defend its worship against the whole world”. He also described it as an animal that had a “poem of compassion” about it.

We examine just how much a cow costs in the next of our cow facts. It’s generally estimated that a cow of average weight (around 1,300 pounds) can command a price of $910, but this price can fluctuate from anywhere between $800 and $1,300!

Cows Lie Down to Sleep

In fact, it’s urban legend that cows sleep standing up. Like many other animals, they’re quite capable of lying down to rest and then getting up again when they wake. Some people think that if a cow is lying down it is injured – again this is not the case. Usually, if it is lying down it is perfectly well and perhaps enjoying an afternoon siesta!

Clarabelle the Cow is a famous Walt Disney creation who came to life in some of Walt Disney’s earliest animations in the 1920s. In the 1990s she made a cameo in Who Framed Roger Rabbit? She originally had a boyfriend called Horace Horsecollar, but was also a girlfriend of Goofy the Dog. She’s portrayed as a gossipy, adventurous bovine who loves shopping – and, naturally, being a cartoon character, she finds herself in a lot of scrapes and awkward situations.

The next of our cow facts shows us a little bit about their eyesight. Cows and bulls are mostly red/green colour blind. You might have heard the phrase like a red rag to a bull used when someone is angry. However, it doesn’t really make much sense with regards to cattle as they can’t distinguish red from green.

This is a bit of an astonishing fact. Six years ago, researchers from the National Institutes of Health and the US Department of Agriculture mapped the bovine genome. They discovered that every cow has around 22,000 genes, and 80% of those match with ones found in the human body. We’re closer to our cattle than we think.

Cows Drink a Bathtub Full of Water Each Day

Next time you run a bath to the brim, think about this – that would be an entire day’s water supply for a single cow! That’s an awful lot of water. In fact, an average bath holds about 38 gallons – so that’s roughly how much it would take to sustain one of our bovine friends. They eat around 40 pounds of food a day, so really do need a lot of hydration to keep them going!

Cows Can Walk Up Stairs, but Not Down Them

This is a really strange one of our cow facts! A cow can walk upstairs, but it wouldn’t be able to walk back down again afterwards. This is purely down to the fact that the joints in their knees don’t bend the right way, so wouldn’t allow it!

A Cow Once Flew in an Airplane!

The last of our cow facts tells us the strange but true story of a cow who went by the name of Elm Farm Ollie. In February of 1930, this bovine superhero became the first cow to fly on an airplane as part of the International Air Exposition, which took place in St Louis. The experiment took place to see what effect air travel would potentially have on animals. However, all that apparently happened was that she produced an extraordinary amount of milk – during her time on board she produced 24 quarts of the white stuff. She was accompanied by a man called Elsworth L Bunce, who holds the record for being the first man to milk a cow on a flight. 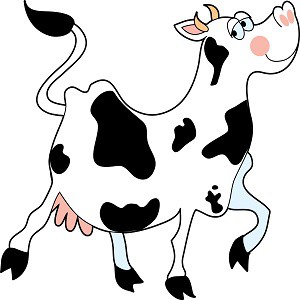 Fascinating facts about cows tell us that they’re a much more intelligent and sensitive animal than we give them credit for. They only have 1 stomach, but it has 4 chambers. They eat around 40 pounds of food each day and wash it down with 38 gallons of water! Due to the joints in their knees they could walk up a flight of stairs but not back down again. It is a myth that they stand up to sleep and also that they are enraged by the colour red – all cows are colour blind!