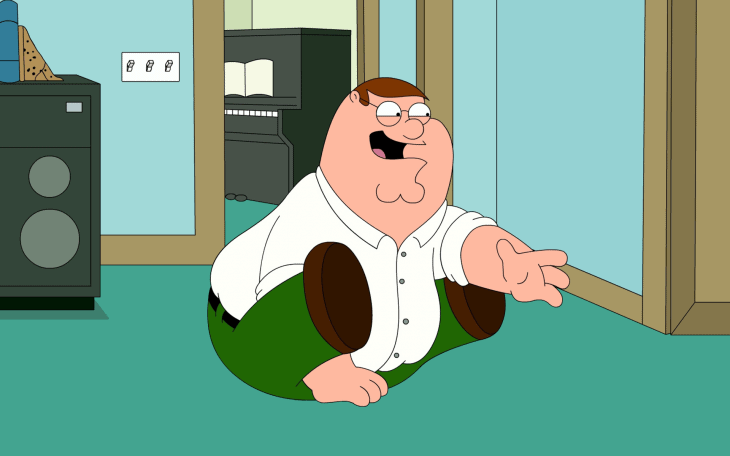 As the lead protagonist of the animated classic Family Guy, Peter Griffin is a guy you’d love to hate. For 18 seasons and counting, the show has followed the daily life of the Griffin household and their friends.

While he may not be the most intelligent nor the most likable, Peter Griffin’s controversial character is exactly why some people can’t get enough of him. Behind his abrasive behavior, some could argue that there’s a lot of complex layers to his persona. However, some would also simply say that he’s a colossal a-hole. Rule out the final verdict yourself with these Peter Griffin facts.

Quick Facts
Essential Facts
Interesting Facts
Table of Contents
01 Peter Griffin has the least amount of respect for his daughter Meg.
02 His favorite song of all time is called ‘Surfin Bird’ from a group called the Trashmen.
03 In the retelling of the famous Star Wars movies, Peter Griffin played the role of Han Solo.
04 Peter Griffin created a coalition for obese men.
05 Peter Griffin's Twitter handle is @PumkinEater69_.
06 Peter Griffin has made appearances in other animated shows and commercials.
07 The character of Peter Griffin is based on a real person from Rhode Island.
08 Peter Griffin has also been noted to be musically talented throughout the animated series.
09 Peter Griffin has a long list of celebrities that he greatly dislikes.
10 Peter Griffin’s nemesis is a yellow chicken named Ernie.

Peter Griffin has the least amount of respect for his daughter Meg.

In the show, the daughter of the family, Meg Griffin often ends up as the butt of the family’s jokes. Throughout each season of the show, Peter would often play crazy pranks on his daughter as a result of the abuse he received from his sister, Karen as a young boy.

Additionally, this long line of frustration being taken out on Meg also famously coined the catchphrase “Shut up, Meg!” in the show. However, after Meg saves her father Peter from his sister in a later episode, Peter begins to be less abusive towards his daughter and shows more care and compassion.

His favorite song of all time is called ‘Surfin Bird’ from a group called the Trashmen.

In the episode I Dream of Jesus, Peter Griffin reveals that his favorite song is called ‘Surfin Bird’ as it plays in a diner. Peter is filled with glee when he hears the song and asks a staff member at the diner if he could have the vinyl record to which he later spends the majority of the episode singing repeatedly.

This causes his entire family to despise the song which leads Stewie and Brian to steal the record while Peter is asleep and destroy it. After Peter realizes that his record has gone missing, he goes out to a record store to find another copy where he meets Jesus Christ and leads on to the latter half of the episode.

In the retelling of the famous Star Wars movies, Peter Griffin played the role of Han Solo.

To commemorate Star Wars’ 30th anniversary, Family Guy aired a retelling and parody of the original trilogy. Over three episodes, Peter Griffin played Han Solo. Meanwhile, several of his friends and acquaintances took on a different role as a character in the Star Wars franchise, with slightly altered personas to fit their original ones.

Well-received by fans of both sides, this spoof also featured many famous actors and celebrity icons such as James Woods, Dolph Lundgren, Alex Thomas, and several others.

In the episode Fat Guy Strangler, Peter Griffin gets diagnosed with clinical obesity and urged to lose weight to stay healthy. Instead, Peter starts a movement to support fat people’s rights, creating a group to support many others that are like him.

Peter calls this association the National Association for the Advance of Fat People (NAAFP), holding an unsuccessful first meeting with a large group of obese men. Later on, Peter Griffin is nearly killed by a psychotic serial killer who was traumatized by the image of a fat man and his mother when he was a young boy.

In an episode of the show’s 11th season, Peter Griffin revealed his Twitter account,  @PumpkinEater69_ – which references the old rhyme, Peter Peter, Pumpkin Eater. Created around the time this first episode aired in December 2012, you can check see the Twitter account for yourself.

However, since it hasn’t been verified, many believe that this account might have been made by a fan after seeing the episode. In total, the Twitter account has a total of 10 tweets and has not been active since December 2012.

Peter Griffin has made appearances in other animated shows and commercials.

Peter Griffin has made several appearances in numerous other adult oriented animated series such as The Simpsons, The Cleveland Show, and American Dad. These crossovers occurred within the realm of the MacFarlane shows with a bonus crossover between the Family Guy and The Simpsons universe.

Generally, MacFarlane pitched this crossover to poke fun at the comments made on Peter Griffin’s character and its similarities to Homer’s from The Simpsons. Peter Griffin has also made small cameos in the show South Park and has also been featured in advertising commercials for the real-life Subway restaurant in 2008.

The character of Peter Griffin is based on a real person from Rhode Island.

Most especially, Seth MacFarlane stated that he wanted to incorporate the loud laugh and unique accent the security guard had into the character. Peter Griffin’s personality closely resembles that of a stereotypical sitcom father who does not do much around the household, spending his time drinking and watching television.

Peter Griffin has also been noted to be musically talented throughout the animated series.

In many of the Family Guy episodes, Peter Griffin has been shown to have musical experience through his youth and adulthood. In his junior year of college, Peter Griffin reveals that he used to play the trombone and took lessons as a young adult. Similarly, he has been seen singing and playing the guitar numerous times in the show.

In the second season of the series, Peter has shown impressive piano skills under the influence of alcohol, which his wife takes advantage of and enters him in a piano contest. In total, Peter plays the most musical numbers in Family Guy Season 4 compared to any other season. 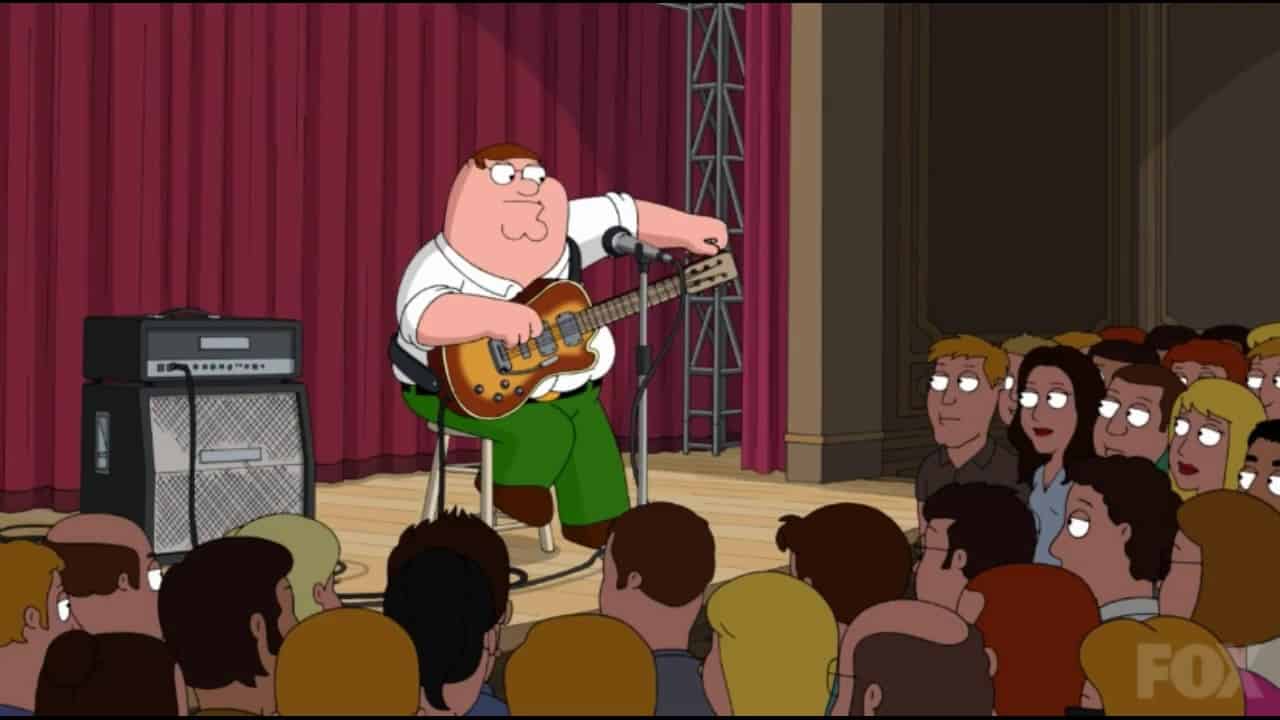 Peter Griffin has a long list of celebrities that he greatly dislikes.

In the episode titled Episode 420, Peter Griffin’s dog Brian received the 2009 Stoner of the Year award, which led to his arrest for the possession of cannabis. Later on, the Mayor of the city legalized the use of drugs, which prompted everyone to smoke and abuse marijuana.

Peter Griffin takes advantage of this situation, regularly smoking and going on random outbursts where he lists several celebrities he dislikes. Surprisingly, the list includes many famous icons such as Justin Timberlake, Kathy Griffin, Amy Winehouse, Chris Martin, and several others.

Throughout the animated series, Peter Griffin creates several enemies due to his obnoxious personality and irresponsibility. One of these enemies is a large yellow chicken named Ernie who is treated as a running gag throughout the series of the show.

This chicken often appears in large fights and destructive rampages involving Peter Griffin and leads the two to attain several heavy injuries towards each other. The chicken, Ernie, also has a British counterpart in a longstanding feud with Peter Griffin.