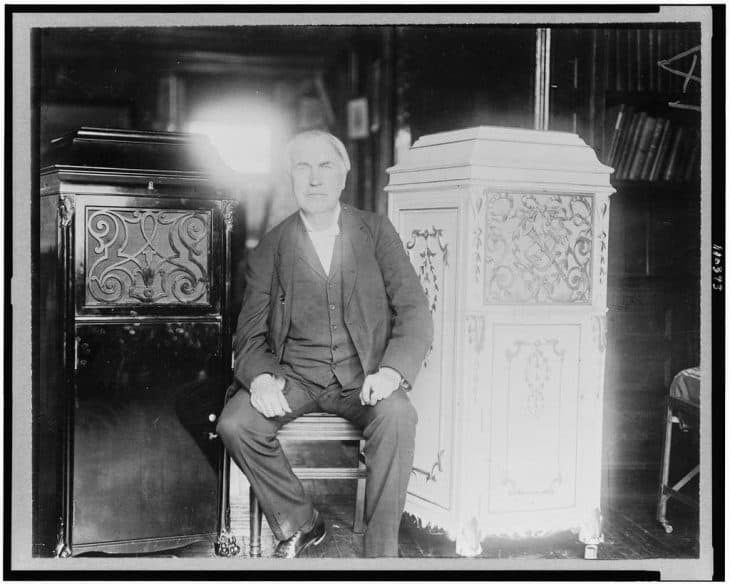 Thomas Alva Edison is most famously credited with the invention of the light bulb. When Edison began experiments with light bulbs, several models had in fact already been created. Unfortunately, they weren’t viable commercially because they either didn’t last long or took too much electricity to power. Always a businessman, Edison was looking for a cheaper way to bring light that would be inexpensive enough for everyone to use. Thomas Edison facts indicate that Edison essentially remodeled the light bulb and changed the way it used current and the materials necessary in its manufacture. He is the creator of the modern incandescent light bulb.

Edison knew that as an inventor it was important to patent his work in order to prove ownership. Until 2003, Thomas Edison held the record for most patents for an individual, having registered 1,093 patents with the United States Patent Office. Shunpei Yamazaki surpassed Edison’s record in 2003.

In 1901, Edison created a nickel-iron battery that he felt would be better than current batteries on the market. Thomas Edison facts show his goal was to use the battery for electric vehicles. Unfortunately, a couple years after he created his battery, manufacturers stopped making the once popular electric vehicles. Subsequent vehicles relied more heavily on gasoline and steam.

Edison’s First Job Was on a Train

As a teen, Edison sold newspapers and candy on a train in Michigan. Always the businessman, he obtained the right to be the exclusive seller of newspapers on the railway, and began a small business with four assistants.

Edison Was Trained as a Telegraph Operator

Edison was trained as a telegraph operator and even worked for the Associated Press bureau news wire. His knowledge of the telegraph lead to several inventions and 150 patents. Some of his inventions were due to his own needs. Thomas Edison facts tell us Edison was partially deaf and wanted to make his job easier. One of his inventions was a printer that translated the signals into letters.

The first invention that really brought Thomas Alva Edison widespread attention was the phonograph. Edison completed his first phonograph in 1877 at his Menlo Park laboratory in New Jersey. It surprised the populace and earned him the nickname of “The Wizard of Menlo Park.” The phonograph was an extension of Edison’s work with the telegraph and the telephone. It recorded sound on paraffin-coated paper as indentations, and then used a stylus to replay the sounds. To the general population, this seemed like magic.

Thomas Edison was the first to offer electricity as a utility sold through a company. After he’d revolutionized the light bulb and made it a viable commercial entity, he created the Edison Illuminating Company with the goal of bringing electricity into homes. Thomas Edison facts indicate he chose to focus on DC power, his preferred electrical current. In 1882 he flipped the switch, bringing electricity to his first 59 clients in Manhattan.

Thomas Edison married Mary Stilwell in 1871. He was 24 and she was 16. The couple had three children: Marion, Thomas Jr. and William. Unfortunately, Mary died in 1884 at the age of 29. It is believed she died of typhoid fever.

Soon after the death of his first wife, Edison met Mina Miller, whom he married in 1886. Edison was 39 at the time and Mina was 20. Edison and his second wife also had three children: Madeleine, Charles and Theodore. Charles Edison was the Governor of New Jersey from 1941 to 1944 and took over his father’s labs and businesses upon Edison’s death. His youngest son, Theodore, was also an inventor who had over 80 patents to his name.

Thomas Edison and Nikola Tesla are often pitted against each other as if the pair were rivals. In fact, Thomas Edison facts show that Tesla actually worked for Edison for a while. The two inventors disagreed on electrical current. Edison championed direct current (DC) as the best way to bring electricity into homes and business. Tesla preferred alternating current, AC. Currently, AC flows into our homes but many of our appliances require a converter (AC Adapter) to change the current to DC so that they can use only the amount of electricity they need. Eventually, Tesla became fed up with Edison and left his employ.

Edison Did Chemistry Experiments on a Train

Thomas Edison facts show that as a teen, Edison had a job selling newspapers and other items on a train. During his downtime, he would run chemistry experiments with a set he had snuck onto the train. Unfortunately, on one occasion he had a chemistry accident and was no longer allowed to bring his set on board. Obviously this did nothing to quell Edison’s inquisitive nature!

Edison Saved a Child’s Life, Which Changed His Life

Quick reflexes helped Thomas Edison when he saw a young child about to be hit by a runaway train. Edison saved Jimmie Mackenzie and endeared himself to the boy’s father, who happened to be the station agent. The elder MacKenzie showed his gratitude by training Edison as a telegrapher.

Edison Was Fired for Spilling Acid on his Boss’s Desk

At the Associated Press, Edison would work late nights so he could experiment and read at work. One night, while working with a battery, he spilled sulfuric acid on the floor. The acid leaked through the floor and spilled onto his boss’s desk below. He was dismissed from his job the following morning.

Henry Ford worked at Detroit’s Edison Illuminating Company and experimented with building a gasoline-powered vehicle during his off hours. Edison encouraged Ford’s work when he met him in 1896. The second time the two met, after the invention of Ford’s personal automobile, Edison and Ford became fast friends and even vacationed together. Together the pair, sometimes with various friends, would go driving and explore the country.

Edison Had a Crew of Inventors at Menlo Park

Edison didn’t work alone. Though he is often credited with many inventions, the truth is he wasn’t always the one to build the prototypes. Thomas Edison facts show he would patent his ideas and then hire inventors who would create working prototypes from them.

Edison Recorded A Nursery Rhyme on the Phonograph

In order to test the phonograph, Edison had to record something. He chose to record “Mary had a Little Lamb”. Therefore, this children’s nursery rhyme was the first thing ever recorded on a phonograph.

Ford Had a Test Tube from Edison’s Death Chamber

Legend has it that Ford asked Edison’s son Charles to capture Edison’s last breath in a test tube and send it to him. Evidence suggests that in actuality, Charles noticed a rack of test tubes in his father’s bedroom. Upon his death, he had the test tubes sealed and offered one to Ford as a way to remember Edison, who had always loved chemistry and was also supportive of Ford’s work. 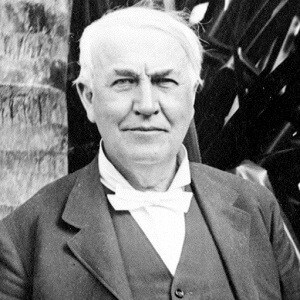 Thomas Alva Edison was a renowned American inventor and businessman. He invented the phonograph and revolutionized the incandescent light bulb, illuminating the world for many. Edison fathered six children with two wives and worked tirelessly at experimenting and inventing. He had 1,093 patents to his name upon his death in 1931. Edison created the first electric utility distributor and was known as the Wizard of Menlo Park, in honor of his amazing inventions and the site of his laboratories.