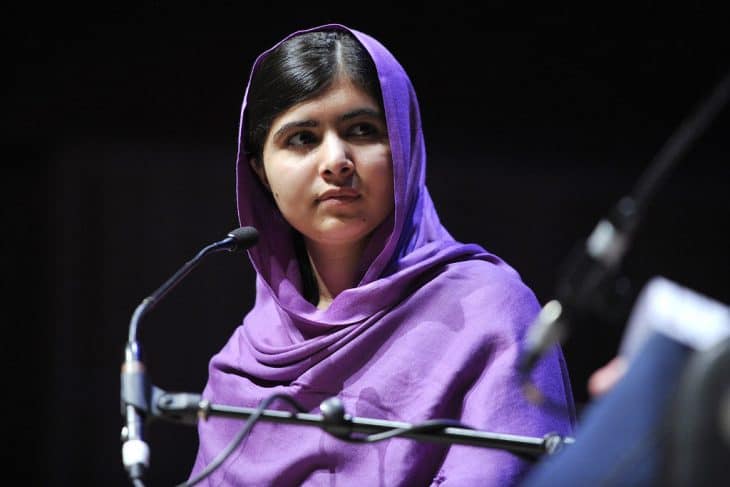 As people have more access to information, the world’s awareness of the current social and political climate steadily increases. A huge part of this progress is thanks to hundreds of small voices that dare to speak up. From Greta Thunberg of the environmental movement to Malala Yousafzai’s work in addressing human rights and education for all, these people‘s stories are a wonder to behold. Take a look at how a 10 year-old helped change the world despite the odds with these Malala Yousafzai facts.

Malala Yousafzai is the youngest person to receive a Nobel Prize.

While there are many essential Malala Yousafzai facts, one of the most notable ones is her status as the youngest Nobel Prize Laureate in history. On October 10th, 2014, Malala Yousafzai became co-recipient of the Nobel Peace Prize. She received the 2014 Nobel Peace Prize in Norway along with children’s rights advocate Kailash Satyarthi. At 17 years old, Malala became the youngest person to ever receive a Nobel Prize, along with being the second Pakistani in history to receive one.

Malala spoke out against the Pakistani Taliban at a young age.

Around 2007, the Pakistani Taliban began to occupy Swat, the district wherein Malala’s family resided. Only 10 years old at the time, Malala lived with her parents, two younger brothers, and two pet chickens. The Pakistani Taliban, or Tehrik-i-Taliban in Pakistan (TTP), wanted to enforce their strict and radical version of the Islamic Sharia law. The Pakistani Taliban wanted to impose a number of extreme rules such as death penalty for music store owners and barbers. They also prevented people from getting vaccinated, listening to music, or watching television. Furthermore, they banned girls from schools. The extremists also went as far as shutting down and blowing up schools.

The Pakistani Taliban’s occupation of Swat thus forced Malala Yousafzai and her classmates to stop going to school. By the end of 2008, the Pakistani Taliban destroyed over 400 schools. This consequently prompted Yousafzai to speak out about the Taliban at a young age. Malala delivered her first public speech in September 2008 during a press club in Peshawar. Her speech, entitled How dare the Taliban take away my basic right to education? quickly caught the media’s attention. Yousafzai then became known for her remarkable courage by speaking out against the Taliban at 11 years old.

Malala Yousafzai worked as a blogger for BBC Urdu.

In 2008, BBC Urdu wanted to cover the Pakistani Taliban’s occupation of Swat through the eyes of a schoolgirl residing in the area. Many students refused to write for them because their families were worried about the potential risks that this could bring. One of their correspondents got in contact with Ziauddin Yousafzai, Malala’s father, who was also a local school teacher.Eventually, Ziauddin Yousafzai suggested that his daughter, Malala, could write for them. The editors at the BBC agreed that Malala Yousafzai could blog about the citizens’ daily lives under the regime of the Pakistani Taliban. She was in seventh grade at that time. To protect Malala, the BBC asked her to write under a pseudonym. Malala then wrote under the pseudonym “Gul Makai”, which takes inspiration from a Pashtun folk tale character. The BBC published her first entry on January 3, 2009.

The Pakistani Taliban shot Malala Yousafzai in the head.

Despite the dangers, Malala Yousafzai fervently spoke out against the Pakistani Taliban. She received death threats through social media and even had notes and newspapers slipped under her door. In 2012, however, the threats became reality.

On October 9th, 2012, a gunman of the Pakistani Taliban attacked Yousafzai as she was walking home from school with her friends Kainat Riaz and Shazia Ramzan. The two girls were stable after the shooting and survived to provide information to the authorities. Unfortunately, Malala was left in critical condition. The bullet hit her several inches away from her left eye, pierced her neck, and lodged in her shoulder.

Doctors operated on her in a military hospital in Peshawar, and she would later receive further treatment in Birmingham, England. She woke up from her coma on October 17th, 2012 and received medical treatment until her full recovery. The hospital discharged her on January 3, 2013.

The incident quickly gained worldwide news coverage. For many, it evoked feelings of anger and sympathy. Various world leaders, such as Pakistan’s Asif Ali Zardari, UN’s Ban Ki-moon, and US’s Barack Obama spoke out against the incident and the Pakistani Taliban.

Malala welcomed her 16th birthday by giving a speech.

One of the most interesting Malala Yousafzai facts is that on July 12, 2013, she celebrated her 16th birthday by giving a speech at the United Nations headquarters. This was also her first public speech following her attack in 2012. During the ceremony, Malala wore one of the shawls of the late Benazir Bhutto, Pakistan’s first female prime minister.

In her speech, she thanked everyone who supported her and aided in her recovery and acknowledged that she spoke for thousands of people who struggle to voice out their calls of help. Malala Yousafzai also spoke about women’s basic human rights, including rights to education, which the Pakistani Taliban tried to suppress. She called upon governments to provide children with free, compulsory education, and sought to ensure a brighter future for children worldwide. The Kate Whitney song Speak Out aired on International Women’s Day 2017, uses words from the speech as lyrics.

Malala Yousafzai’s speech caught the attention of many and inspired leaders and celebrities worldwide. For many, she became a symbol of resistance and a beacon of hope for girls all around the world. To honor her bravery, the United Nations dubbed the day of her speech as Malala Day. Yousafzai commented on this by saying, “Malala day is not my day. Today is the day of every woman, every boy and every girl who have raised their voice for their rights.”

In 2013, Malala Yousafzai funded the Malala Fund with her father. Based in Birmingham, England, the Malala Fund is a non-profit organization committed to providing worldwide access to free, safe, and quality education.

Interestingly, the first contribution to the organization came from renowned actress Angelina Jolie. She donated $200,000 to fund the education of girls from the Swat District, where Malala came from. The Malala Fund went on to finance the creation of schools, classrooms, and educational programs for girls in many different countries, such as India, Brazil, Kenya, Ethiopia, Pakistan, and Turkey, among others.

She is the youngest UN Messenger of Peace.

In 2017, Malala received the highest honor given by the United Nations to citizens. They designated her a UN Messenger of Peace because of her resolve to create a better world. As Messenger of Peace, she continues to speak out about education for all and equal basic human rights. Additionally, she states that education is a right for all and should not be neglected. Other notable UN Messengers of Peace are Jane Goodall, Leonardo DiCaprio, George Clooney, and Stevie Wonder. Truly one of the most outstanding Malala Yousafzai facts.

Malala Yousafzai’s upbringing helped shape her unwavering advocacies. Her father, Ziauddin Yousafzai, is a teacher and a social activist himself. He founded a school in their region, advocating for equal educational rights for both boys and girls. As a child, he faced bullying for his skin color, socioeconomic status, and his stuttering problems. He also gained awareness of their society’s discrimination against women, and he vowed to advocate against all kinds of discrimination and injustice.

Ziauddin Yousafzai’s work inspired Malala to take action as well. He had a profound influence on the young girl and encouraged her to become a politician in the future. Ziauddin described his daughter Malala as a bright and special girl who would often discuss politics with him.

One of the more recent Malala Yousafzai facts is that she graduated from Oxford University. In 2017, she started studying in Oxford University. She studied at one of Oxford’s colleges, Lady Margaret Hall. Benazir Bhutto also studied in this college in the 1970s. During her time in Oxford, Malala stated that she joined the Oxford Union, the Oxford Pakistan Society, and the cricket club. She also lived a relatively normal college life and stated that she often crammed essays at 11 PM the night before they were due. On June 19th, 2020, Malala made a celebratory post on Twitter that read:

Hard to express my joy and gratitude right now as I completed my Philosophy, Politics and Economics degree at Oxford. I don’t know what’s ahead. For now, it will be Netflix, reading and sleep. 😴 pic.twitter.com/AUxN55cUAf