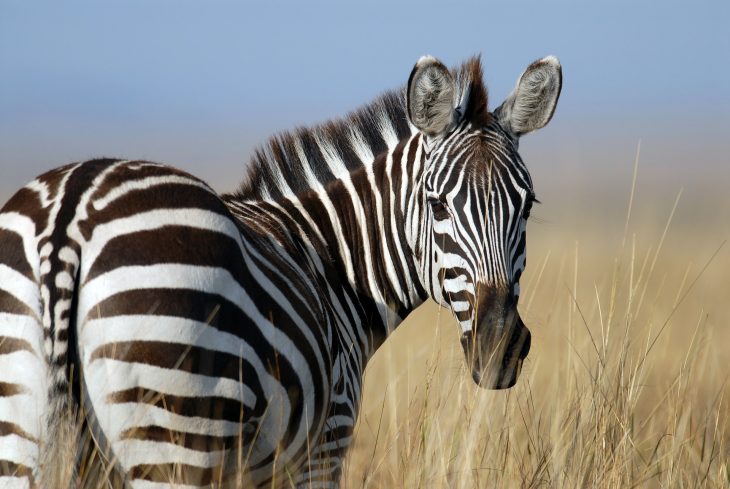 Zebras are one of the must-see animals when you visit Africa. They belong to the horse family and they are well-known for their mysterious stripes. For a long time, these wonderful creatures boggle our minds if their stripes are white, or actually black. Here are some interesting and helpful zebra facts that will unfold the mystery behind their stripes. Get ready to meet one of the most amazing animals in Africa!

Quick Facts
Essential Facts
Interesting Facts
Table of Contents
01 Jules Grévy discovered Grévy's zebra.
02 Plains zebra is the most common type of zebra.
03 Mountain zebra has two species: Cape mountain zebra and Hartmann's mountain zebra.
04 A zebra's bark sounds like  "a-ha, a-ha, a-ha" or "kwa-ha, kaw-ha, ha, ha".
05 A foal or baby zebra can run an hour after birth.
06 Zebras belong to the Equidae family.
07 Zebras are facing extinction.
08 The stripes protect zebras from flies and predators.
09 A group of zebras is called a dazzle.
10 Zebras are black with white stripes.
11 It's impractical to tame a zebra.
12 Zebras graze on grass, weeds, and seeds.
13 Zebras are sociable.
14 Zebras have fierce fighting tactics.
15 Zebra can travel great distances.
16 Zebra can live up to 25 years.
17 Zebroid is general term for the offspring of a horse and a zebra.
18 Zebroids include zorses, zedonks, zonies, and many more.
19 Chris Rock played the role of Marty the Zebra.
20 Mountain zebras are awesome climbers.
21 Lions and hyenas are the common predators of plains zebras.
22 Botswana's national animal is the zebra.
23 Grévy's zebra marks its territory with its urine and manure.
24 Quagga is a subspecies of plains zebra.
25 The last captive Quagga died in Amsterdam on August 12, 1983.
26 Burchell's zebra is another type of plains zebra.
27 Zebras groom one another.
28 Zebras' teeth never stop growing.
29 Zebras are kept in protected areas.
30 Zebra is from the Latin term 'equiferus'.

Grévy’s zebra or imperial zebra is the biggest living equid. Jules Grévy discovered Grévy’s zebra in Ethiopia and Kenya. Unlike the other zebras, it is tall, its stripes are narrower, and has big ears. It can live up to 5 days without water. Its head-body measures 2.5–2.75 m, its tail is 55–75 cm long, and stands at 1.45–1.6 m high. This zebra weighs 350–450 kg.

Plains zebra is the most common type of zebra.

Zebras make different sounds and noises to communicate. They bark and the sound they produce is like  “a-ha, a-ha, a-ha” or “kwa-ha, kaw-ha, ha, ha. Grévy’s zebra sound is like the hippo’s groan. To warn their group they make a loud sound, but when they are in pain or fight, they howl.

A foal or baby zebra can run an hour after birth.

A newborn zebra weighs 70 lbs and they can already start running an hour after birth. Moreover, its stripes are brown and white and just darken as they grow. It follows everything that moves so the mare stops her young to approach other zebras. After a few weeks, foals will start to nibble grass but they are still nursed up to 13 months. If hyenas and dogs threaten the young, the group protects them.

Zebras belong to the Equidae family.

Zebras are wild horses that live in Africa. But unlike horses, zebras have night eyes on their front legs. In contrary to horses or other equines, zebras’ front legs are longer than their hind legs. Check out the video to see what are night eyes.

The conservation status of zebras differs according to species. There are just around 2,000 Grévy’s zebras left. The mountain zebras are likely to become endangered—with just about 35,000 of them as their population continuously decreases. Plains zebras have the highest population, at about 150,000 – 250,000 in the wild but this number is also reducing significantly. Climate changes and human actions are causing their number to decrease. These zebras are losing their habitats and they face a shortage of water and food for sustenance.

The stripes protect zebras from flies and predators.

Flies are more likely to land on surfaces with just one color, than white and black surfaces. Hence, the zebra’s stripes actually protect them from biting flies. In addition, these stripes also guard them against predators because their colored stripes confuse the enemy, which makes it difficult for the attacker to locate or target them, giving them the opportunity to easily escape. Their stripes also act as camouflage with the woods.

A group of zebras is called a dazzle.

Associated with their unique stripe patterns, a group of zebras is called a dazzle. In the same way that zebras are known for their “motion dazzle”. Motion dazzle is the ability to confuse the predator to locate its prey’s location, especially when they move quickly as a group. Dazzling zebra facts!

Zebras are black with white stripes.

A popular question about zebras is whether zebras are white with black stripes or black with white stripes. Underneath the zebra’s striped coat is actually black skin. Most animal skin cells produce melanin, which gives human skin, eyes, and hair their color. Though for zebras, melanin produces a white color that forms the zebra’s stripes.

It's impractical to tame a zebra.

If you want to have a zebra for a pet, here are zebra facts you need to know. Although some have tried to domesticate or train a zebra, it is not practical or humane to do in general. Zebras belong to the horse family but unlike horses, it’s very hard for them to be domesticated or trained. This is because they have unpredictable behavior. They have a strong tendency to panic and escape. Zebras are also wild and aggressive.

Zebras primarily eat grass and sedges or weeds, but they also feed on leaves, bark, fruit, and seeds if the grass is inadequate. They spend most of their time eating. Their molars or teeth are meant for grazing, their incisors or front teeth are sharp to bite the grass, and back molar teeth are for pounding.

Plains and mountain zebras live in a harem or a closed family group. They also have their home range or area where they live for a period of time. Zebras stay in their group even when the family stallion or male zebra dies or disappears. The stallion also protects and feeds the mare and young zebras in their group.

Zebras are protective of their own, especially their foals. They protect themselves with their great speed, strong legs, and their large herd. Zebras also have good stamina, they can run up to 68.5 km per hour and easily outrun their predators. When threatened, kicking and biting are their fighting skills. Zebras also form a half-circle with the young zebra in the center. The group faces the attacker and attack if they move close.

Just like other African animals, zebras migrate or move to other places to search for food and water. It has been recorded that plains zebra traveled 150 kilometers between Namibia and Botswana, the farthest land migration of mammals in Africa. The migration includes thousands of zebras moving in the north-south direction.

Zebra can live up to 25 years.

They can live for around 25 years depending on food shortage and predators. Around 50 percent of young zebra or foals are killed by predators. On the other hand, zebras in zoos or captivity live longer for approximately 40 years.

Zebroid is general term for the offspring of a horse and a zebra.

Zebroid is the name for the mixed breed between any horse family and a zebra. Since the 19th century, zebroids have been bred but there are several times it resulted in dwarfism or being notably small.

Zebras breed with various species of the horse family. Can you guess the hybrids given the names?

Chris Rock played the role of Marty the Zebra.

In the movie Madagascar, one of the main and the energetic character Marty is a plains zebra. The American comedian Chris Rock played the role of Marty. Movies like Khumba and Lion King also featured zebras in the series. Definitely shows how prevalent zebras are in pop culture!

No wonder mountain zebras have pointed and hard hooves! These hooves help them climb mountains. As zebras usually inhabit a place in heights of about 6,000 ft, unlike the Grévy’s zebra where they inhabit places closer to grasslands. Mountain zebras use their skills to move from one mountain to another in search of food.

Lions and hyenas are the common predators of plains zebras.

Major predators of plains zebras are the hyenas and lions. Lions are more successful in preying on a single zebra when they are isolated from the group. Usually, foals and mare became their victim. Sometimes crocodiles also attack zebras when they are near the water.

Botswana's national animal is the zebra.

Zebra is the chosen animal of Botswana for its beautiful blacked and white stripes. Aside from this, they consider zebra as harmless, affectionate, or loving which represents the characteristics of Motswana. Zebra also symbolizes the national unity of Botswana.

Grévy's zebra marks its territory with its urine and manure.

Though zebras live in Africa, each species has its own territories. Grévy’s stallion is very territorial, they mark their range with their urines and dungs or manure. Their territories range from 10-14 km. If the Grévy zebra’s territory is near water or a river, it’s more likely that it will attract mare or female zebras.

Quagga is a subspecies of plains zebra.

Quagga is a subspecies of plains zebra living in South Africa. It is about 257 cm tall and known for its limited pattern of brown and whites stripes on the front body. The stripes of the quagga are brighter on the head and neck while the rear or the back part of the quagga looks like a horse.

The last captive Quagga died in Amsterdam on August 12, 1983.

In the 1850s, much of Quagga’s range disappeared. The last caged female quagga in Amsterdam Natura Artis Magistra zoo died on August 12, 1983. Back then, the death of the female captive quagga did not signify its extinction. However, it was only during the 1900 Convention for the Preservation of Wild Animals, Birds, and Fish in Africa, that they finally acknowledged the extinction of quagga. Sad zebra facts…

Burchell's zebra is another type of plains zebra.

Another subspecies of plains zebra is the Burchell’s zebra. It is named after the British naturalist and explorer, William John Burchell. It weighs approximately 500-700 pounds. It is legal to grow Burchell’s zebra for human consumption.

Zebras groom one another.

Grooming each other strengthens their social bond. They bite and scratch along the neck, back, and lips. Grooming also lessens their aggressiveness. This is usually between young zebra and mare and between stallion and mare. Cute zebra facts!

When zebras graze grasses and weeds, their teeth wear out over time. Because their incisors need to remain sharp, their teeth naturally grow in their entire life. Zebra spend around 60-80% of their time eating.

Zebras are kept in protected areas.

In order to preserve and protect zebras, different parks in Africa are used as protected and conservation parks for zebras. In Ethiopia, the protected areas for Grévy’s Zebra are Yabelo Wildlife Sanctuary and Chelbi Sanctuary. Plain zebras are in sanctuaries in Tanzania and Tsavo and Masai Mara in Kenya. Some of the conservation areas for mountain zebras are Mountain Zebra National Park and Karoo National Park in South Africa.

Zebra is from the Latin term 'equiferus'.

The word zebra originated from the Latin ‘equiferus’ which means a wild horse; from equus (horse) and ferus (wild). But in early times, Greeks and Romans called zebra ‘hippotigris’ which means horse tiger.