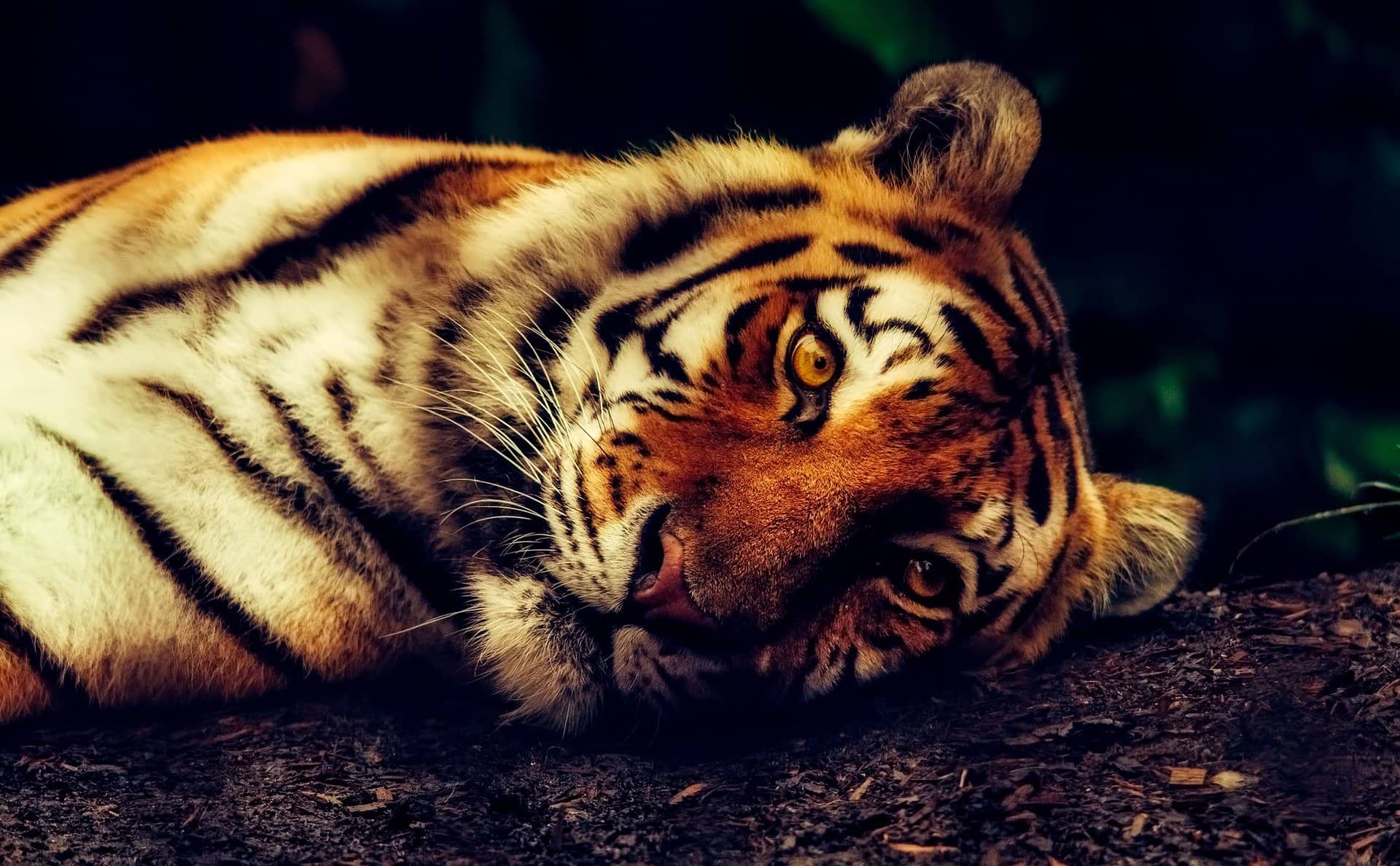 One of the more sobering tiger facts is that these animals have nearly been wiped off the planet. Two species of tigers are already extinct, and the rest of the species are classified as endangered. Before the start of the 20th century, there were an estimated number of at least 100,000 tigers in the wild. Tigers have been hunted by humans for years. In the past, many villages wanted to eliminate tigers from surrounding areas because of their fear of the animals. In more recent years, tigers have been hunted for their fur, which can be sold for large sums. Today, the remaining population of all species of tigers in the wild is fewer than 3,000.

No two tigers have the same exact pattern in their fur. Most tigers are orange with black stripes. Other color combinations include white and sandy colored stripes. The rarest tiger is the white tiger, but these are highly sought by poachers and are becoming even rarer. In all tigers, their stripes act as camouflage and prevent their prey from seeing them while they hide in thick bushes waiting to attack. One of the lesser known tiger facts is that if you removed their fur, the stripes would still be present on their skin.

Tigers Feast on a Wide Variety of Animals

Tiger facts show that these animals have a unique method of hunting. They can imitate the sounds of their prey in order to attract them and attack them by surprise. Tigers are incredibly efficient hunters, and most commonly tend to prey on snakes, boar, buffalo, crocodiles, deer, leopards and camels. They may also eat small rodents, birds or other small animals if they are unable to find another source of food.

Tigers typically mate from November through to April. Once the tigress is impregnated, she carries her young for 3 months. She will usually give birth to 2 or 3 tiger cubs. These cubs are blind when first born and are incredibly vulnerable. The cub will not be able to hunt for itself until it is 18 months old. While tigers are known to be solitary animals, the exception is a mother and her cubs. They will remain together for 2 or 3 years, only separating once the cubs are large enough and strong enough to be on their own.

Tigers Have Been Held in Captivity for Centuries

During Ancient Roman times, it was common for tigers to be kept and then trained and exhibited. They were also provoked to fight humans and other animals for spectators to watch. During the 18th century, tigers found homes in zoos and circuses, where they became popular attractions. In 2011, the United States had 2,884 tigers in captivity in zoos and facilities dedicated to repopulating the species.

Tigers Thrive in a Forest Habitat

Tiger facts show us that these animals are native to the forests and grasslands of east and southern Asia. However, they are highly adaptable and can be found in a variety of different habitats. Tigers have largely been eliminated from Asia and from other countries where they once roamed freely. The main reason for the reduction in the number of wild tigers is increased human population and loss of habitat. Wild tigers can still be found in Bangladesh, Vietnam, Cambodia, India, Bhutan, Thailand, Indonesia, Laos, Malaysia, Russia, Nepal and Myanmar.

Some Cultures Use Tigers in Traditional Medicine

In the past, tigers were occasionally hunted to keep them away from villages and other human settlements. Today, tigers face the dangers of poachers. If a tiger is illegally killed, its organs, pelts and bones will be sold on the black market. Demand continues to increase despite the well-known facts about the animal’s threatened conservation status. One of the main reasons tigers are poached is because many of their body parts are said by traditional medicine practitioners to heal various ailments. For example, eating the brain of a tiger is said to cure pimples, while eating its nose will cure epilepsy. While Western medicine views these claims as ridiculous, they are not likely to disappear from certain cultures anytime soon.

Tigers are solitary animals, meaning that they spend most of their time alone. They hunt, eat and sleep alone in their specific territory. Occasionally, home ranges overlap with one another. A female tiger usually has a territory of 12 square miles, while a male has a territory of almost 40 square miles. To mark their territories, tigers scratch trees and spray their urine on the borders. One of the more fun and unusual tiger facts is that their urine smells like buttered popcorn.

The Tiger is the World’s Largest Feline

Many people tend to assume the lion is the largest cat in the world but this title actually belongs to the tiger. The Siberian Tiger is the largest of all of the tiger species, weighing in at nearly 1,000 pounds. These magnificent beasts can be found in certain areas of Korea, Russia and India, and around the Himalayas. It would take nearly 120 domestic house cats to make up the same weight as a single Siberian Tiger.

Tigers can hit impressive speeds of up to 50 miles per hour. Despite its large size, the tiger is one of the fastest animals on the planet. This speed certainly comes in handy when hunting and when keeping their territory safe from invaders. Most tigers average around 40 miles per hour when running, but such speeds cannot be maintained over long distances. The fastest mammal in the world is another big cat – the cheetah, which tops out at 71 miles per hour.

Wound licking is common among many animals, and is often a response to an injury. In tigers, however, wound licking is incredibly effective. Tiger facts tell us that these animals have antiseptic saliva, meaning that they can disinfect their wounds, and eliminate germs in cuts and scrapes. This helps the tiger to prevent its injuries becoming infected, thus speeding up the healing process.

A tiger’s brain weighs just over half a pound. This makes the tiger second in line out of all carnivores when it comes to brain size. The polar bear has the largest brain of all. At one time, scientists believed that the size of an animal’s brain was linked to its social activities. In other words, it was believed an animal with a larger brain would associate more with other animals. Tigers, however, are solitary animals with above average size brains and therefore this theory is no longer accepted.

Tigers and Lions can Crossbreed

Male tigers of course mate with tigresses but they also have the capability to mate with other species of cats, leading to the birth of hybrids. A male lion and a female tiger can mate and produce a liger, which can weigh up to 1,000 pounds. This hybrid is one of the largest cats in the world. When a male tiger and female lion mate, a tiglon is produced. This cat is much smaller than the liger, weighing in at just under 400 pounds.

Tigers Can Remain Standing After They Die

One of the most fascinating tiger facts is that these animals can die from a variety of causes yet remain standing, if that’s the position they were in at the time of death. There have been many accounts of tigers being shot, bleeding out and dying, all within a few minutes, without falling over or collapsing. If a tiger dies from natural causes while standing, it will remain in this position until something pushes it over.

This is one of the tiger facts that you should remember. While rare, tiger attacks on humans do take place. If you find yourself close to a tiger in the wild, stare directly into its eyes. Tigers love the thrill of the attack and if they know they won’t catch you by surprise they are less likely to attack. People that travel deep into the forests where tigers are still found naturally often wear masks on the back of their heads to protect them from a tiger that may show up behind them.

Tigers Could Help Redecorate Your Home

One of the more fascinating tiger facts involves their tongue, which is covered by papillae. These are numerous small and sharp rear-facing projections that are designed to allow the tiger to strip skin, feathers, fur and eventually meat right off of its prey. Their tongues are so rough and strong that they have been known to lick the paint right off of the walls in their zoo enclosures.

Tigers Have Better Memories than Humans

July 29 has been dedicated to raising awareness for the tiger conservation movement. Global Tiger Day, or International Tiger Day, is an annual event recognized throughout the world. The organization behind it asks for donations, whether they be monetary in the form of helping to spread the word about how endangered tigers are. The group believes that all tigers could be extinct within the next five years if extreme precautions are not taken, starting right now. 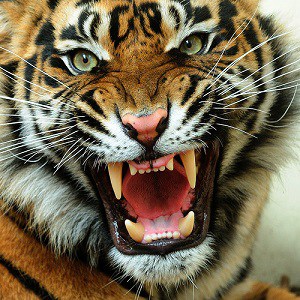 Tigers are the largest felines in the world, but they are also incredibly vulnerable to the impact of humans on their population. These tiger facts will explain the dangers and threats that these animals face. They also focus on where these animals are still found in the wild, their hunting techniques and how they raise their young.