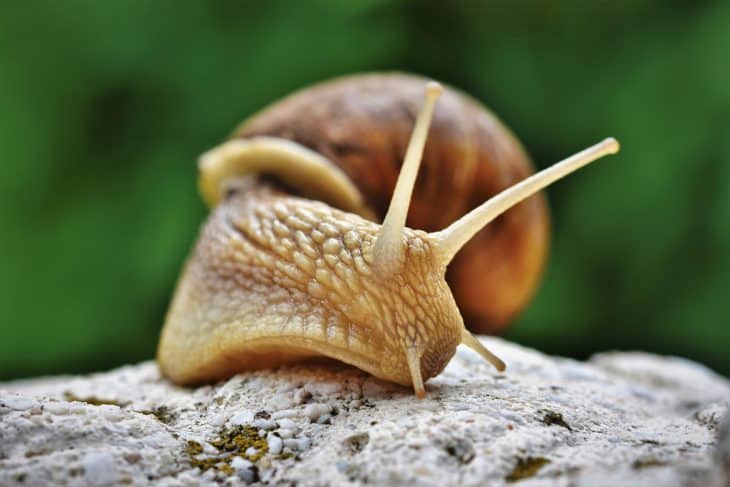 When you’re moving at a snail’s pace, it usually means being extremely slow. On the flip side, it can also mean being patient enough to maintain a steady pace. Snails may be painfully slow, but there’s a lot more to them than their reputation as nature’s slowpokes. In fact, not many know about the different types of snails aside from the ones they see in their gardens. Uncover the secrets behind these animals‘ shells with these snail facts.

Quick Facts
Essential Facts
Interesting Facts
Table of Contents
01 Snails have the most teeth of any animal.
02 The sea snail makes up a majority of snail species.
03 Snails can sleep for 3 years.
04 Keeping a pet snail is relatively low-maintenance.
05 A snail mouth doesn’t have jaws.
06 Some aquatic snails can be seen as pests.
07 Freshwater snails usually reproduce asexually.
08 Garden snails are nocturnal.
09 The cosmetics industry uses serum from garden snails.
10 Snail food needs to be rich in protein for them to grow.
11 Slugs and snails have one main difference.
12 The oldest fully-preserved snail dates back to 99 million years ago.
13 Snails usually have two eyes.
14 Snails are born with shells.
15 Snail shells cannot be replaced.
16 The plough snail may be the fastest snail alive.
17 China has the smallest snail in the world.
18 Snails can lay over 100 eggs in one clutch.
19 Snail shells have many industrial uses.
20 Snails aren’t insects.
21 A snail moves using one muscular foot.
22 Gastropods make up a majority of mollusks.
23 Cone snail venom can kill a human.
24 The giant whelk is the world’s largest snail.
25 It would take 33.33 hours for a snail to go a mile.
26 Around ⅓ of snails die after giving birth.
27 Snails used to be a staple in times of famine.
28 Some snails can trail after another snail to move faster.
29 Salt alone doesn’t kill slugs and snails.
30 Some restaurants serve snail caviar.

Snails have the most teeth of any animal.

A snail’s mouth may be the size of a pin, but it can have up to 20,000 teeth depending on the species. More surprisingly, the strongest natural material in the world can be found in a species of marine snail’s teeth. Upon close study, limpets’ teeth were shown to be 5 times stronger than spider silk, withstanding extreme pressures that would turn carbon into diamond.

The sea snail makes up a majority of snail species.

More diverse than land snails, sea snails come in many shapes and sizes. Though they usually come in spiral shells, some sea snails have conical or bivalve-shaped shells. Most of them have gills, but some have lungs and only stay active during the low tide.

Snails can sleep for 3 years.

Aside from their crazy number of teeth, these small critters have some more surprising tricks up their sleeve – or shells. As if their signature slime wasn’t any indication, snails need constant moisture to survive.

When temperatures get fatally dry, snails have to sleep so they can secrete enough mucus to survive. Generally, nap time for a snail can last from a few hours up to 3 years. How’s that for relatable snail facts?

If you’re thinking about keeping snails as pets, you’d be glad to know that it’s fairly easy. All you’d really need is a terrarium (or an aquarium, depending on the kind of snail you want) and food. Ideally, snails feed on any fruits or vegetables. However, be careful not to feed them any citrus because they’re highly sensitive to acid.

A snail mouth doesn’t have jaws.

In this sense, their mouths aren’t lined with teeth like other animals. Instead, snails feed with their radula – an elongated sac lined with thousands of tiny teeth. Snails use this organ to scrape and digest their food instead of chewing on it. How’s that for cool snail facts?

Some aquatic snails can be seen as pests.

Especially for aquarium owners, snails can easily go from being a helpful presence in their aquariums to completely overrunning it. Though you may even grab an aquatic snail from a pet store, some breeds such as the pond snail, rams horn snail, and trumpet snail tend to be hard to manage. Their quick reproduction threatens the balance in aquariums.

Freshwater snails usually have both egg and sperm cells, thus being able to reproduce asexually. This also makes them more likely to be seen as pests, since they can easily multiply.

Unless the weather has been rainy, you’d rarely see a garden snail in broad daylight. Instead, it does most of its routine at night until the wee hours of dawn.

People first recognized snail serum’s value in skincare in the 1980s, when members of a family-owned snail farm noticed how handling snails made their skin clearer and softer. Since then, snail mucin has been valued for erasing wounds or other blemishes in many countries. Now there’s one for unlikely snail facts.

Snail food needs to be rich in protein for them to grow.

Although you can buy ready-made snail feed, scientists recommend dried moringa leaves to provide an optimal amount of protein for your crawlers.

Slugs and snails have one main difference.

Structurally and biologically, slugs and snails have many similar features. Though you may be confused how to tell them apart, the main difference between a slug vs snail is their lack of a shell. Because of the lighter load, slugs can also move slightly faster than snails.

The oldest fully-preserved snail dates back to 99 million years ago.

Although scientists believe that snails may have been around 500 million years back, the most complete snail fossil dates back to 99 million years ago. Recovered from Myanmar in 2018, the fossil preserved a prehistoric land snail’s shell, head, eye stalk, and foot in amber. Since fossils would usually only preserve the shell, this was a historic find.

For land snails, these eyes can be found at the tips of their longest tentacles. Meanwhile, aquatic snails have eyes at the base of each tentacles, thus giving them a more limited range of vision in comparison.

However, some underground species don’t develop eyes at all, instead relying on other senses to navigate. Generally speaking, carnivorous snails have better vision, while other snails can only distinguish light and dark.

Snails are born with shells.

Upon hatching, baby snails have a protoconch or “earliest shell.” Though soft and transparent at first, the snails develop a harder shell as they get calcium from their food.

Aside from being their homes, snail shells protect the organs encased in its mantle. Though a snail could heal from minor damage and cracks, it cannot recover from a completely broken shell. Definitely one of the snail facts to keep in mind the next time you see one.

The plough snail may be the fastest snail alive.

This sea snail can use the ocean’s waves to its advantages, flexing its foot like a sail and moving 2.5 cm per second compared to the average 1 cm.

China has the smallest snail in the world.

First seen in soil samples from a cliffside in Guangxi in 2015, the Angustopila dominikae is a snail small enough to fit the eye of a needle.  Upon discovering it, scientist Barna Páll-Gergely named it after his wife, Dominika.

Snails can lay over 100 eggs in one clutch.

Out of these eggs, usually only 20 to 50 hatch successfully and reach maturity. How’s that for snail facts?

Snail shells have many industrial uses.

Though they may share the same turf and both crawl on the ground, that’s about as far as similarities between the two go. One of the obvious (yet still often mistaken) snail facts is that they aren’t related at all to their fellow crawlers.

Though you may think that snails would move in a way similar to snakes, this is actually not the case. Instead, snails propel themselves forward using one muscular foot. The mucus they secret also serves as a lubricant and protects their underside from rough or sharp surfaces.

Gastropods make up a majority of mollusks.

Mollusks cover a diverse variety of creatures, including clams, oysters, scallops, octopi, and squids. However, snails and slugs make up over 80% of the total mollusk population in the world.

Though snails may seem harmless, you’d have to think twice before you go near this sea snail. The cone snail draws in unsuspecting divers or animals with its colorful shell, releasing a venomous harpoon once its victim comes closer. This harpoon can cut through skin, gloves, or wetsuits. To date, cone snail stings have claimed 27 human casualties.

The giant whelk is the world’s largest snail.

Reaching a whopping 70cm in size, the Australian great whelk dwarfs the African land snail into a third of its size. Isn’t that one for snail facts that are larger than life?

With the average snail speed, it would take over a day for a snail to travel a mile. That is, if it can even focus that long. Definitely one of the snail facts we’d like to see someday.

Around ⅓ of snails die after giving birth.

Like all animals, giving birth places extreme stress on a snail. After losing significant body mass, some snails don’t make it to the next breeding season.

Snails used to be a staple in times of famine.

Although French escargot would cost you a fortune in restaurants, snails used to be a last choice for people who had no food – specifically confirmed by an 1800 text from Scotland.

Some snails can trail after another snail to move faster.

Much like humans, snails can rely on their brethren for a much-needed boost. If a snail follows another snail’s trail, it can get around faster using the added traction.

Though it may look like salt melts slugs and snails, the salt alone doesn’t kill them. Instead, it’s their body’s reaction with the salt that delivers a fatal blow. When salt mixes with the slime they’re covered in, it creates a highly saline solution. This solution rapidly sucks out water from their bodies through osmosis. In this process, they bubble, shrivel up, and eventually die of dehydration.

It may sound like another one for unlikely snail facts, but snail eggs are actually considered a gourmet delicacy in some places. Measuring 3-6mm in diameter, snail caviar has been described as crunchier than fish caviar, tasting more like baked mushroom.