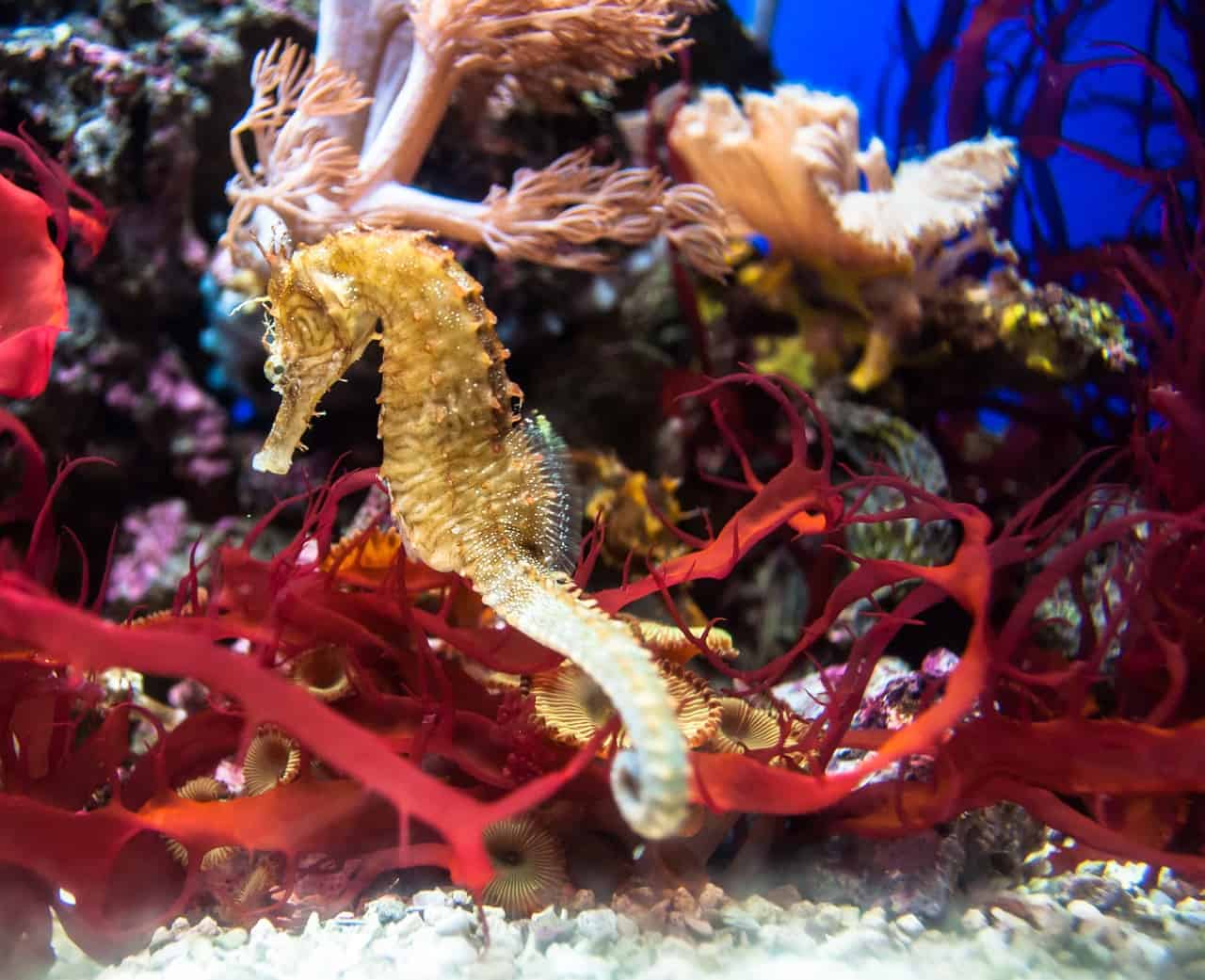 Named for their counterparts on land, seahorses are one of the most distinct looking sea creatures of the deep. Found in tropical and temperate waters, you probably wouldn’t think that this small animal was called a “sea monster” by the Greeks. Aside from being Nemo’s best friend, people don’t really know much about seahorses. Find out more about these unique creatures with these seahorse facts.

Quick Facts
Essential Facts
Interesting Facts
Table of Contents
01 Seahorses move by using two types of fins.
02 Seahorses can eat up to 50 times per day.
03 Seahorses don't have stomachs.
04 They don't have teeth.
05 A seahorse can eat plants too.
06 The big-belly seahorse is the biggest seahorse species.
07 Satomi's pygmy seahorse is the smallest seahorse species.
08 Some species are diurnal and others are nocturnal.
09 Seahorses sleep with their eyes open.
10 They can change their colors.
11 A seahorse can move their eyes independently.
12 The seahorse has more than 50 predators.
13 You can eat a seahorse.
14 The female gives her unfertilized eggs to the male when mating.
15 It's the male seahorse who gives birth.
16 Life is tough for a baby seahorse.
17 The pipefish and seadragon are related to the seahorse.
18 Seahorses are monogamous.
19 Seahorses practice courtship for several days.
20 Seahorses have 4 stages or phases of courtship.
21 The final phase of courtship involves mating.
22 People once believed that seahorses could cure illnesses.
23 Many factors threaten the seahorse population.
24 Some seahorse species are already extinct.
25 Seahorses are now popular as pets.
26 Owning a seahorse as a pet can be challenging.
27 Keeping seahorses as pets is expensive.
28 The lined seahorse is one of the most colorful seahorses.
29 The freshwater seahorse is still an urban myth.
30 The dwarf seahorse is the world's slowest fish.

Primarily, seahorses propel themselves forward using a dorsal fin on their back. Meanwhile, they use the pectoral fins at each side of the head to maneuver and navigate. Extremely small and fast, these pectoral fins flap for about 35 to 40 times per second, which is way too fast for humans to see.

Seahorses can eat up to 50 times per day.

Seahorses mostly feed on small crustaceans such as Mysis shrimp, ghost shrimp, red shrimp, brine shrimps, daphnia, and even guppies. Moreover, an adult seahorse has to eat between 30 to 50 times a day to sustain themselves. How’s that for seahorse facts to chew on?

Considering their huge appetites, this is probably one of the more surprising seahorse facts. However, their lack of a stomach is precisely the reason why seahorses have to eat so much.

Instead of being stored in an organ, the food just passes by their digestive system so fast that they need to constantly spend a huge amount of time hunting for food.

They don't have teeth.

Unlike a regular fish or other marine creatures, seahorses do not have any teeth. Therefore, they need to suck in their food and swallow as a whole.

A seahorse can eat plants too.

Although seashores normally eat smaller marine animals, they can also consume plant matter such as seagrass, kelp, seaweed, and algae.

The big-belly seahorse is the biggest seahorse species.

Some species are diurnal and others are nocturnal.

Seahorses sleep with their eyes open.

Like most other fish, seahorses don’t have eyelids. As a result, they sleep or rest with their eyes open. When resting, they tend to cling onto reeds or corals using their tails to camouflage and avoid drifting in the ocean while resting.

They can change their colors.

Seahorses are some of the few marine creatures that can change colors and camouflage into the environment for their protection. Seahorses may also change colors to communicate and express emotions, especially during courtship. Definitely one of the most fascinating seahorse facts!

A seahorse can move their eyes independently.

Aside from its ability to change colors, seahorses evolved with unusual adaptations that help them thrive in the ocean. Aside from its powerful snouts used to suck its prey, seahorses can also move their eyes independently to evade its predators.

The seahorse has more than 50 predators.

You’d understand seahorses’ flighty nature when you find out that over 50 marine species prey on seahorses. Some of these predators who hunt seahorses are the skipjack tuna, loggerhead sea turtles, horn sharks, and fairy penguins.

You can eat a seahorse.

Speaking of seahorses as snacks, this sea creature also features in some countries’ cooking. Asian countries such as Taiwan, Japan, and China have seahorse dishes you could try when you visit.

The female gives her unfertilized eggs to the male when mating.

Seahorse mating begins when the female puts her ovipositor to the male’s abdominal pouch and deposits her unfertilized eggs into the male. Then, the male will discharge a sperm into the pouch to fertilize the female’s eggs.

It's the male seahorse who gives birth.

During mating, the female seahorse can deposit more than 1,000 eggs to the male’s pouch. The male carries the eggs for 20 to 45 days to incubate and will eventually give birth to the babies. How’s that for interesting seahorse facts?

Life is tough for a baby seahorse.

The moment a fry or baby seahorse is born, they face many challenges. For one thing, it’s common for male seahorses to eat their young. Out of the hundreds that are born, only a few of them will survive and have a future in the ocean.

The pipefish and seadragon are related to the seahorse.

Pipefishes are the closest relatives of the seahorse which belong to the family Syngnathidae. Meanwhile, the seadragon or weedy seadragon is also a close relative of the seahorse. These fish are characterized by their bony structure and long snouts similar to seahorses.

In contrast to most animals in the land or water, another unique characteristic of the seahorse that they mate for life. The sweetest of all seahorse facts, eh?

Before seahorses breed, their courtship process for several days. Some researchers believe that females use this period to know if the male is capable of receiving her eggs when she is ready to deposit them.

Seahorses have 4 stages or phases of courtship.

The first stage of seahorse courtship happens in the morning, when interested mates would brighten up their color and vibrate from side to side. For the second phase, the female seahorse displays a behavior where she raises her head, forming an inclined angle with her body.

To conclude their courtship, the male seahorse will start to mimic the same pointing behavior in response to the female. Finally, both of the male and female will repeatedly rise upward together in a water column and end in mid-water copulation.

People once believed that seahorses could cure illnesses.

Although there is no concrete evidence or clinical trials, Chinese medicine traditionally uses seahorses. The Chinese believed that seahorses could be used for ailments such as infertility, impotence, wheezing, pain, and labor induction.

Many factors threaten the seahorse population.

Although no data can indicate how close seahorses are to extinction, they lose their habitats due to industrialization and pollution. Aside from habitat loss, illegal trade also threatens seahorses. Each year, around 20 million seahorses are taken from the ocean for its “medicinal benefits” or its use as ornaments. In Asia, seahorses may cost more than silver or gold.

Some seahorse species are already extinct.

Due to seahorses’ strong public demand, some researches believe that species like the Paradoxical Seahorse may already be extinct or critically endangered. However, the wide distribution of seahorse species makes it hard to pinpoint their exact numbers.

Seahorses are now popular as pets.

Today, seahorses make a popular choice for exotic pets. Although seahorses rarely reach its maximum life expectancy in the wild, they can live up to four years if its owner takes good care of it.

Owning a seahorse as a pet can be challenging.

One of the reasons why you would rarely see a seahorse in a pet shop is because it’s not easy to keep them alive. Furthermore, the seahorse must be stored in an individual saltwater tank to keep them from getting hurt by other fishes.

Keeping seahorses as pets is expensive.

For the dwarf seahorse alone, prices could go up to $100. Additionally, seahorses have to eat a lot, which also requires a lot of food. They also need saltwater tanks with a different kind of equipment and regulation. As with any pet, you’d need to invest a lot of time and money to properly care for these animals.

The lined seahorse is one of the most colorful seahorses.

The lined seahorse is native to the waters of Mexico, Venezuela, Canada, the western Atlantic, and the Caribbean. Known for its multitude of colors, the lined seahorse comes in different tones of orange, red, black grey, and green. However, you;d have to dive to the depths of the ocean to see them – lined seahorses live around 70 meters or 230 feet deep in the ocean.

The freshwater seahorse is still an urban myth.

As of today, there is still no confirmed seahorse species that can survive in freshwater. However, there are a few seahorse species who can thrive in brackish rivers or a body of water with less seawater.

The dwarf seahorse is the world's slowest fish.

The Hippocampus zosterae or the dwarf seahorse lives in the subtidal aquatic beds of the Bahamas and some parts of the U.S. The dwarf seashore can only swim 1.5 meters or 5 feet per hour, which earned it the Guinness World Record for the slowest-moving fish in the world.