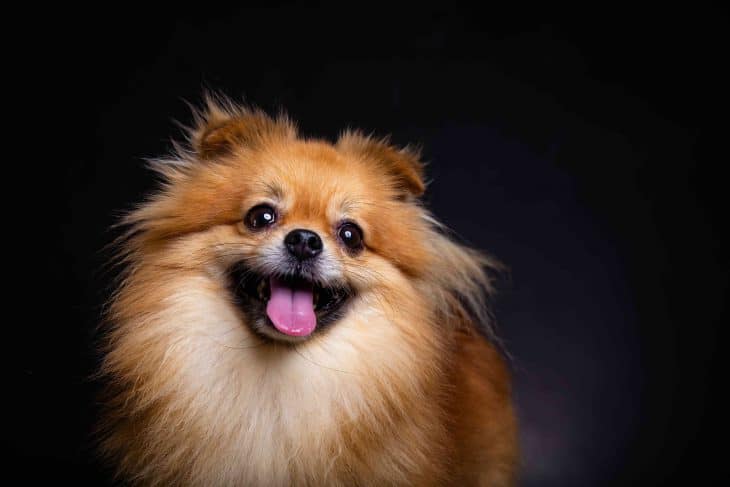 They’re cute, they’re cuddly, they’re charming. From their lion mane-like head to their small toes, it’s no wonder the Pomeranian remains to be a popular choice among dog lovers. If you’ve got any doubt about that, check this out, the American Kennel Club ranked the breed 23rd out of 197 others. That’s an amazing feat for a toy dog! But wait, there’s more! We’ve got more Pomeranian facts where that came from!

Don’t be deceived by their adorable demeanor, Pomeranians are famous for their intelligence, energy, feistiness, and boldness. If you own a Pomeranian, they will alert you if someone enters your home. Pomeranians will never bark at nothing. Thus, when a Pomeranian barks, it’s to notify their owner of something or someone. This makes them excellent watchdogs; no one can sneak up on you if you have a Pomeranian around!

Furthermore, once you show your love for a Pomeranian, he or she will do all they can to give back that love. Pomeranians are one-owner dogs and are very loyal. Pomeranians will accompany their owner anywhere (even to the restroom!) If you get up from your desk and walk into the kitchen, your Pomeranian will most likely follow you.

If you want to know more about these adorable puffballs, check out our list of 40 fun Pomeranian facts!

Table of Contents
01 Pomeranians originated from Central Europe.
02 They belong to the Spitz family of dogs.
03 A Throwback Pomeranian can weigh up to 30 pounds.
04 Pomeranians can suffer from Black Skin Disease.
05 They are incredibly friendly even with other species.
06 Poms are picky eaters.
07 They are a very popular breed.
08 Poms can be fierce watch dogs.
09 Pomeranians have a lot of names and nicknames.
10 A teacup Pomeranian generally costs from $500 to $4,000.
11 Mozart and Chopin were inspired by Pomeranians.
12 Even Michaelangelo had a Pomeranian beside him!
13 Queen Victoria popularised Pomeranians.
14 Theodore Roosevelt also had a Pom.
15 A Pom accidentally burned Sir Isaac Newton's manuscripts.
16 The Grand Duke of Russia gifted Houdini a Pomeranian.
17 There are three types of Pomeranian faces.
18 Two Pomeranians survived the Titanic.
19 Jiff the Pom holds two world records.
20 A Pomeranian won at Westminster Kennel Club Dog Show.

On the southern shore of the Baltic Sea lies Pomerania. The name was derived from the word “Pomorze” which means “along the sea.” Pomerania is abundant with lakes, forests, and farms. The population of the region experienced a major shift after the First World War, and the Second World War. The dog earned its name after the breed was developed in some areas of Germany and Poland.

They belong to the Spitz family of dogs.

It’s a little hard to believe that Poms are in the same family as large sled dogs! Pomeranians are the smallest dog breed from the Spitz family. They’re in the same group as breeds like Alaskan Malamute, Samoyed, and Norwegian Elkhound. Breeding them down was the reason why they remained lap dog size today.

A Throwback Pomeranian can weigh up to 30 pounds.

The average Pom, according to the American Kennel Club, should weigh no more than three to seven pounds, a lot smaller than their descendants. The Throwback Pomeranian is not a Pom variety, though which means they’re not so common. These Throwbacks are very similar to the first Poms. Aside from weighing over 14 pounds, they are much more muscular, and lean towards chasing small creatures.

Like humans, dogs are no stranger to skin disease, especially Poms. Alopecia X, also known as Black Skin Disease, is a disorder wherein dogs experience bad odor, hair loss, and blackening of the skin. The disease is very common to male Poms. The disease is also common to other breeds like Siberian Huskies, Alaskan Malamutes, Chow Chows, Elkhounds, Toy Poodles, and Miniature Poodles.

They are incredibly friendly even with other species.

Though each dog has a different personality, it’s a little different for the Poms. Pomeranians are always excited. They are friendly, enthusiastic, and eager to meet other people. Whether it be humans or other animals, Pomeranians love meeting friends! Like almost every other animal companion, dogs also mimic their humans.

This dog breed is particularly cunning. Pomeranians have a few quirks when it comes to eating. Poms can be a bit picky when it comes to food. Some hardly touch their food, some try to hide it, some prefer treats, some just want chicken, and some prefer hand-feeding. According to the website PetPom.com, there are some ‘traps’ Pomeranians do to their owners to make sure they are fed what they wanted. But when Poms do like their food, they eat a lot.

They are a very popular breed.

Out of the 197 breeds registered in the American Kennel Club, the Pomeranian rank 23rd in popularity! Poms have been a popular pet choice for decades. Their small size and friendly disposition make them a sought-after breed among dog enthusiasts. This certain breed has appeared a lot in films, commercials, and celebrity purses. In 2014, heiress and fashion icon Paris Hilton spent $13,000 on the world’s smallest Pomeranian named Kimchi!

Poms can be fierce watch dogs.

“Small but terrible,” is a phrase so true with Pomeranians. They may be small in stature, but their barks are terribly loud. This makes them an ideal pet for small families who want a toy dog and a watchdog in one. They can be trained to become true watchdogs, as they are always alert for every incoming presence.

Pomeranians have a lot of names and nicknames.

They may be known as Pomeranians, but they go by different names and nicknames. As they are considered to be a part of the German Spitz breed, they’re called Zwergspitz or Deutscher Spitz. They also have numerous nicknames like Pom Dog, Pom Pom, Pom, Loulou, Zwers, and weirdly enough, Tumbleweed.

Who knew the small Pomeranian could become any smaller? A teacup Pomeranian weighs half of a normal-sized Pomeranian, only around three to seven pounds! These tiny Poms have been extremely popular in the last decade due to their size. Any teacup dog is expensive. But when it comes to Pomeranians, $500 to $4,000 is still considered cheap. Still, that does not include their food, vet fees, and vitamins! Despite the health issues some teacup Pomeranians experience, they can live up to 15 years.

Mozart and Chopin were inspired by Pomeranians.

Even musicians and composers were influenced by the cute and cuddly Pomeranians. Classical composer Salzburg-born Wolfgang Amadeus Mozart made over 600 compositions, one of which was written for Pimperl, his Pomeranian dog. Meanwhile, Romantic period virtuoso Frederic Chopin wrote “Waltz of the Little Dogs” after he saw his friend’s Pomeranian chasing its tail!

Even Michaelangelo had a Pomeranian beside him!

Pope Julius II commissioned Italian Renaissance artist Michelangelo to depict the story of God’s creation on the Sistine Chapel’s ceiling. The painter, of course, wanted a companion for the four-year project. He found a friend and spectator in a Pomeranian dog, who was sitting on a satin pillow. The dog watched as his master created one of the greatest masterpieces of all time.

Queen Victoria fell in love with a Spitz dog when she went to Italy in 1888. The Volpino Italiano or Florentine Spitz, according to a Victorian-era description, had a “long, thick coat that seems to stand out from the body, a tail which curls tightly and lies close to the back, a foxy head, small, erect ears, rather short legs, short back, and a generally square and thick-set appearance.”

The Queen had over 30 Pomeranians, two of which were the red-coated Marco and the white-furred Gena. She said the dogs reminded her of Queen Charlotte’s, her grandmother’s, dogs. These dogs comforted her in the decades she spent mourning over Prince Albert.

The Queen was so fond of her dogs that she took them on her travels, completed with their own train compartment and special policemen to make sure they were protected. There were also reports wherein during the Victorian era, a technique was employed to make the Poms small, making them popular dog breeds in the 19th century.

Theodore Roosevelt also had a Pom.

The 26th US President is truly an animal lover, so much so that there’s a stuffed bear named after him. Theodore “Teddy” Roosevelt had parrots, ponies, pigs, rabbits, cats, and dogs. Aside from the Chesapeake Retriever, Bull Terrier, and a Pekingese, he also had Gem, the Pomeranian. Not much was said about the Pom except on the letters he wrote to his son, Kermit.

Mathematician and astronomer Sir Isaac Newton had a beloved Pomeranian named Diamond. Accounts said the dog he loved so much also drove him to deep depression. He was so close to publishing the Law of Gravity after doing a few revisions, but Diamond, in an effort to protect his master, accidentally knocked over a candle. This resulted in the burning of 20 years’ worth of work. The story differs depending on who told it. Some say it was a gust of wind that tipped the candle over. Some say he referred to the “Diamond” as a gemstone he used in his optics.

The Grand Duke of Russia gifted Houdini a Pomeranian.

American escape artist Harry Houdini and his wife Bess Rahner never had children. They doted on their dog, Charlie. The dog was a small white Pomeranian given by the Grand Duke Michael Alexandrovich of Russia. Houdini always brought Charlie to his travels, even secretly hid him when necessary. When the Pom died in 1909, he and his wife were heartbroken. Charlie was succeeded by Bobby, the Fox Terrier.

There are three types of Pomeranian faces.

They have four legs and comes in small sizes. These Poms may look the same, but they all have different face shapes. There are three different Pomeranian faces: the Fox, the Teddy Bear, and the Baby Doll.

A Fox Face Pom has a long nose, large ears, and not enough coat. Meanwhile, a Teddy Bear Pom has a shorter snout and fuller cheeks. Lastly, a Baby Doll Pom looks similar to a Teddy Bear Pom, but has a much smaller face.

The Titanic was one of the greatest ships of the 20th century. It was called The Unsinkable until it, unfortunately, hit the iceberg on April 14, 1912. Out of the 1,500 people aboard, only 705 survived. According to the American Kennel Club, only three out of the 12 dogs survived: two Poms and one Pekingese.

Margaret Bechstein Hays wrapped Lady the Pom in a blanket, while Elizabeth Jane Rothschild hid her Pom because the crew refused to let the dog board Lifeboat 6. Meanwhile, the Pekingese was with a couple on Lifeboat 3.

With over 10.2 million followers, it’s amazing to believe that Instagram star Jiff the Pomeranian is adorable as much as he is talented.  Guinness World Records gave Jiff an award for running the fastest on two back legs and on two front legs. Jiff can run 10 meters on his hind legs in 6.56 seconds, and 5 meters on his front paws in 7.76 seconds, and he got two Guinness citations for that. He’s also great at doing tricks such as shaking hands riding a skateboard, and signing his own autograph.

Established in 1877 in New York City, the Westminster Kennel Club is the oldest organization in America devoted to purebred dogs. The stellar Pomeranian, Glen Rose Flashaway, was the first Pom to win Best Exhibit in Group at the club’s Dog Show in 1926. In the next two years, Pomeranians Little Rajah and Bogota Firebug also won the championship title.