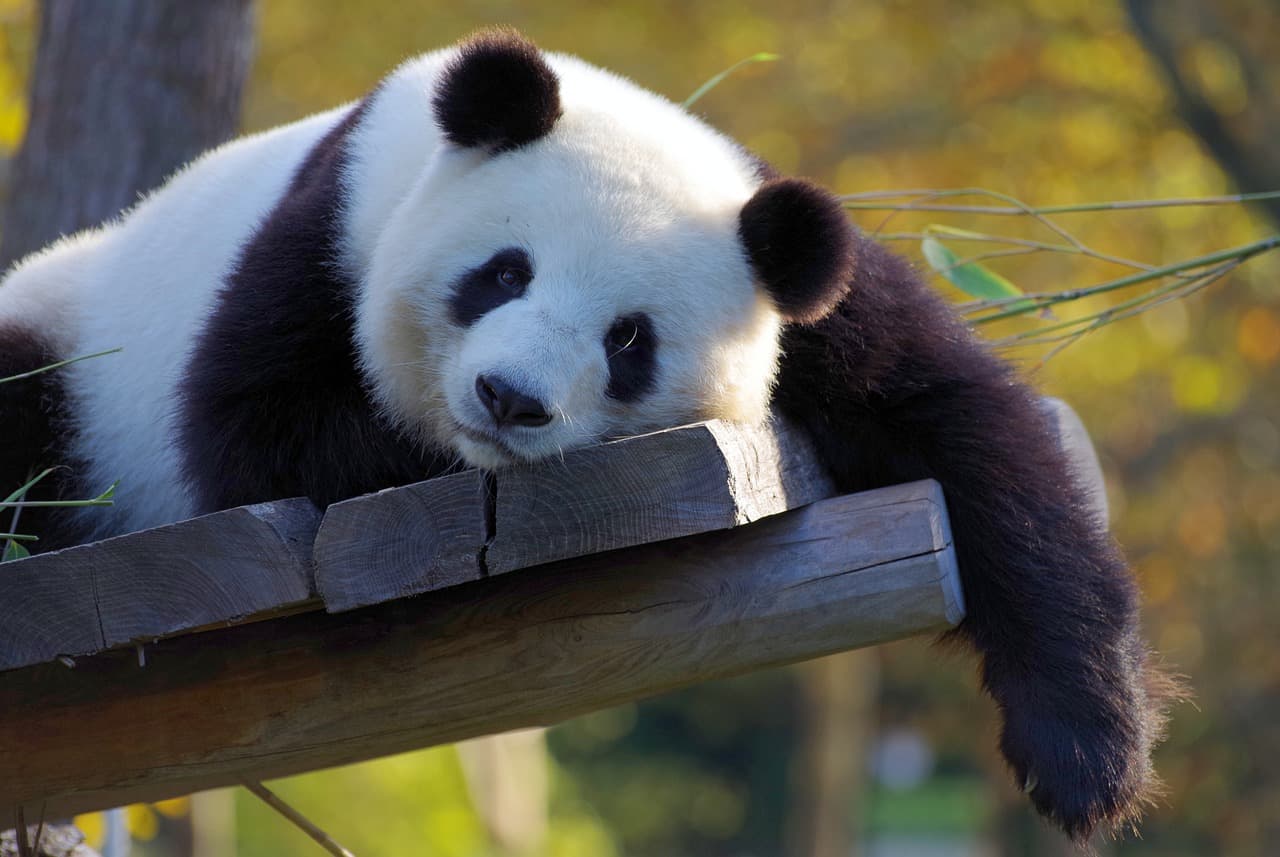 From Ancient China until the present, people have always loved pandas. Whether in popular snacks, animated films, or your Instagram feed, the world just can’t seem to get enough of these fuzzy creatures. However, there’s more to them than being China’s mascot. With less than 2,000 individuals left in the world, human activity has once threatened pandas into extinction. Take a closer look at these rare animals with these panda facts.

Quick Facts
Essential Facts
Interesting Facts
Table of Contents
01 Panda Facts Infographics
02 You can track pandas in the wild through their poop.
03 Newly-born pandas are only as big as a stick of butter.
04 Pandas have the digestive system of a carnivore.
05 Pandas in captivity have an omnivorous diet.
06 Baby pandas are born pink.
07 Pandas are real bears.
08 China has many names for pandas.
09 The panda's name comes from the Nepalese word 'Nigalya Ponya'.
10 There may be two subspecies of giant pandas.
11 The Qinling panda's color is light brown and white.
12 Scientists are uncertain why pandas have their color pattern.
13 Pandas have thick skin.
14 Male pandas usually grow bigger than females.
15 Wild pandas have a lifespan of 20 years.
16 The Beijing Zoo has a collection of many endangered species, including pandas.
17 Female pandas can mate with several partners.
18 Females can only mate within 24 to 72 hours.
19 Pandas are strong climbers and swimmers.
20 Pandas don't hibernate.
21 Pandas prefer to be alone.
22 Young pandas usually leave when their mothers become pregnant again.
23 Pandas are relatively fast.
24 Adult pandas only have a few predators.
25 China started giving away pandas from the Tang dynasty.
26 China loans off pandas to other countries.
27 Newborn pandas also become China's property at birth.
28 Pandas often leave scents for their own kind.
29 Pandas are the only bears with thumbs.
30 Ancient China believed that pandas had magical powers.
31 Stricter laws and people's awareness are saving the panda's population. 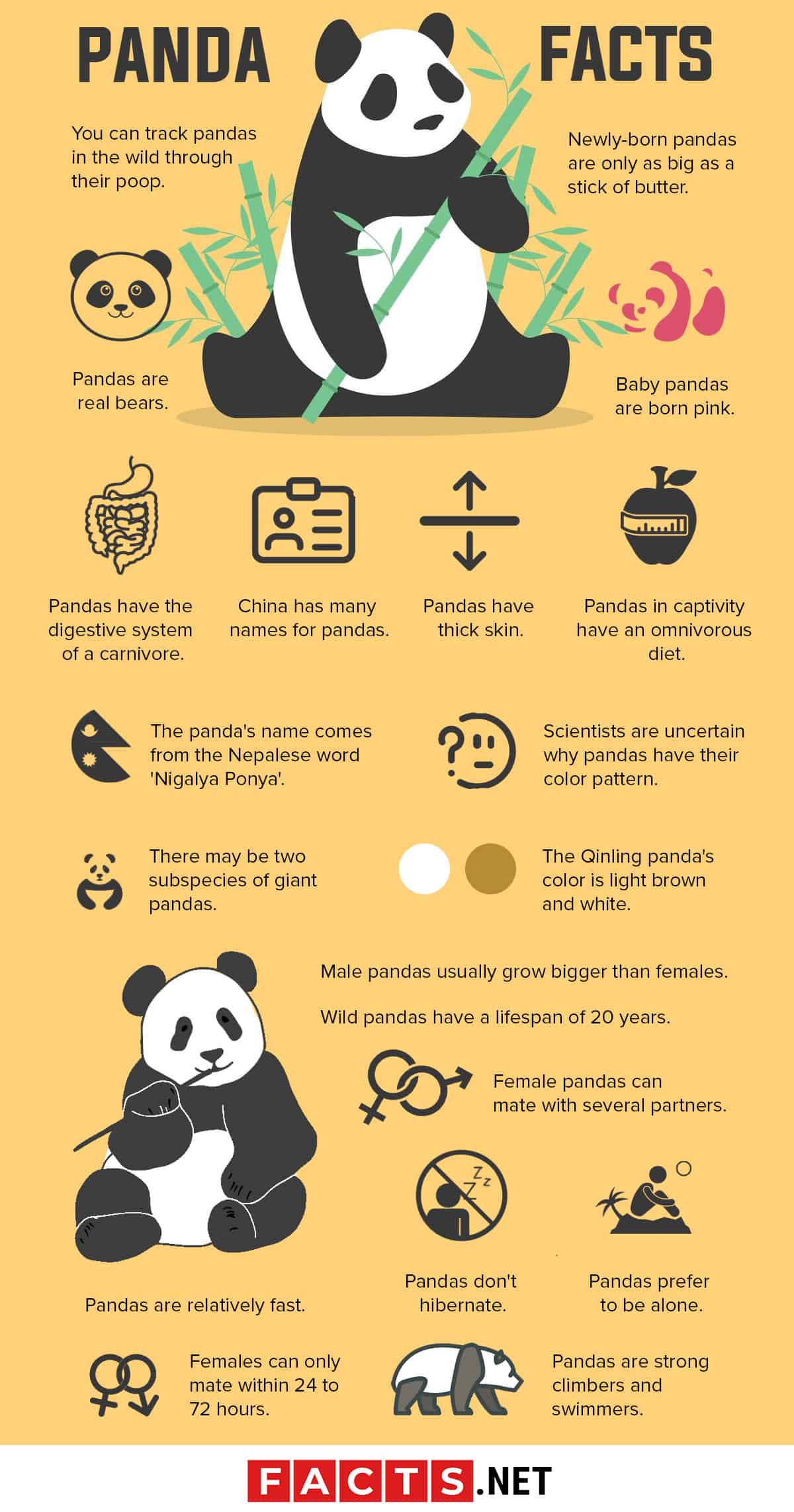 You can track pandas in the wild through their poop.

There’s a saying that goes, “What goes in, must come out.” Since pandas have to eat about 38 kg of bamboo per day, they excrete around 28 kg of poop daily. In the wild, a trail of panda poop most likely leads back to their nest or den, which is a great help to researchers. Unfortunately, this behavior also makes them more vulnerable to poachers and possible extinction. Definitely one of the sadder panda facts.

Newly-born pandas are only as big as a stick of butter.

As adults, pandas grow big enough to prove their namesake of giant pandas. However, newborns are the complete opposite. Upon birth, baby pandas measure 900 times smaller than their mother. With the average size of 5 oz, they only weigh a mere 36 g to 210 g.

Pandas have the digestive system of a carnivore.

Normally, the panda diet consists of 99% bamboo. Although they already eat large amounts to compensate for bamboo’s poor nutritional value, their bodies are further specialized to sustain their needs.

Despite being herbivores, pandas evolved to have a shorter gut, which is usually only seen in carnivores. The special construction of their digestive system allows pandas to metabolize all the nutrients they need to survive. How’s that for cool panda facts?

Pandas in captivity have an omnivorous diet.

Wild pandas may all be herbivores, but it’s a different story for captive pandas. In zoos and sanctuaries, pandas have a more varied diet of eggs, fish, and produce.

Pandas may be known for their distinct black and white coloring, but they lack these colors completely at birth. Instead, newborn pandas appear mostly pink with a fine layer of hair.

Their black and white color only appears after around three weeks. Baby pandas are also born blind with weak limbs. As a result, baby pandas have to stay in their nests for two months, relying completely on their mothers for sustenance.

Since pandas share the features of both raccoons and bears, scientists have long debated the panda’s true classification. However, a 1970 study on pandas’ cellular molecules officially confirmed pandas as real bears. Hence, pandas have been classified under the Ursidae family since the study’s conclusion.

China has many names for pandas.

Throughout history, the Chinese language gave pandas 20 different names. As one of the country’s defining symbols, pandas have appeared even in China‘s earliest writings. Among these names, the ancient Chinese referred to pandas as spotted bear, bearcat, giant bearcat, and bamboo bear.

The panda's name comes from the Nepalese word 'Nigalya Ponya'.

The Nepalese term ‘Nigalya Ponya‘ literally translates to ‘eater of bamboo’.  The word Ponya later became panda in the Western Regions, which explains why we call them pandas today. 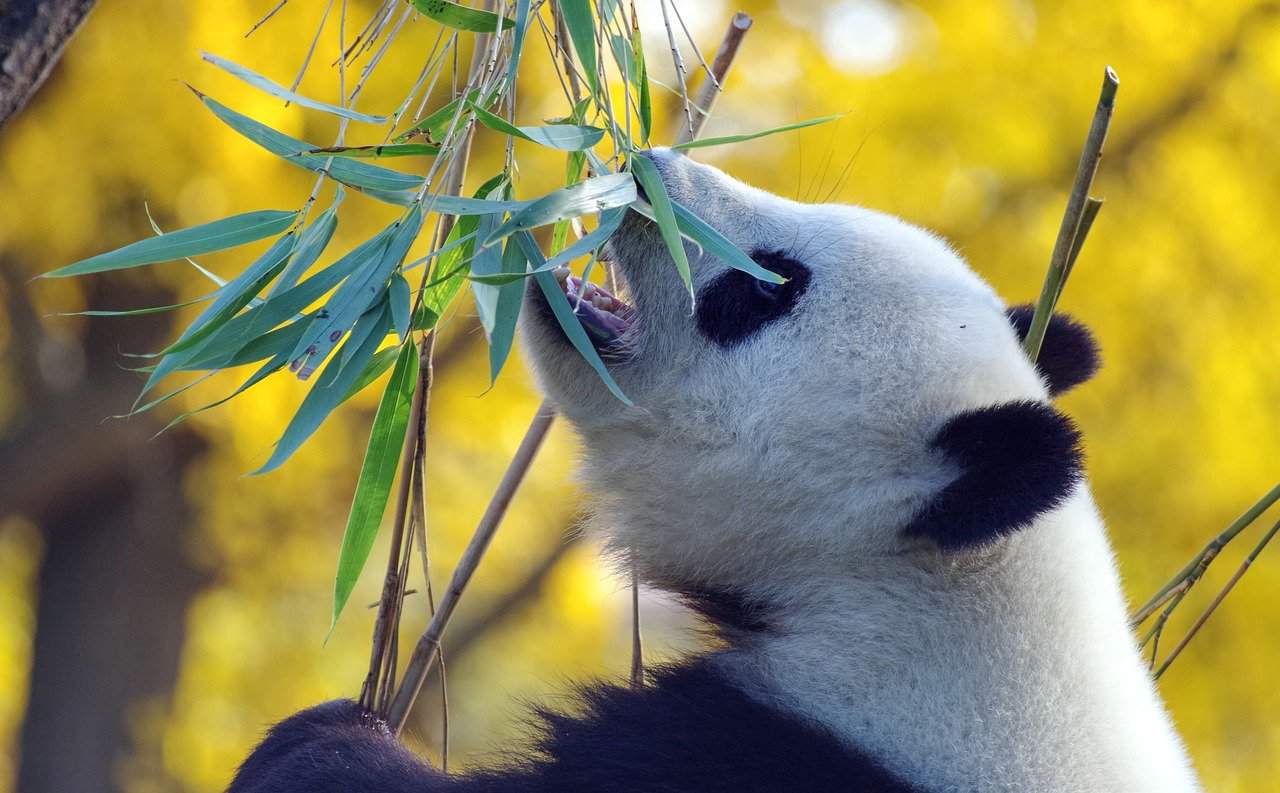 There may be two subspecies of giant pandas.

These panda subspecies are determined by their distinct color patterns, cranial sizes, and population genetics. Although they share close similarities with giant pandas, their minor differences set them apart.

For one, the A. m. melanoleuca refers to the native pandas in Sichuan. However, the scientific community has yet to officially recognize it as a panda subspecies.

The Qinling panda's color is light brown and white.

The Qinling panda mostly resides in the Qinling Mountains in Shaanxi at heights of more than 1,000 up to 3,000 meters. As a subspecies of the giant panda, Qinling pandas have a light brown and white pattern instead of the usual black and white. Furthermore, it has a smaller skull and bigger molars compared to giant pandas. Definitely one of the more unlikely panda facts.

Scientists are uncertain why pandas have their color pattern.

Over the years, scientists have tried to understand why pandas have unusual colors of black and white. Although they haven’t come to an official conclusion, they propose that their dual color provides pandas adequate camouflage in snowy and rocky habitats.

Pandas have a thick, wooly coat that keeps them warm in their cold forest habitats. Moreover, the average thickness of panda skin ranges from 5 mm to 10 mm, which is twice the human average.

Male pandas usually measure 20% heavier and 10% larger than females. The typical adult male can weigh up to 159 kg, which is twice the weight of an average man. Generally, female pandas weigh much lighter at around 77 kg.

Wild pandas have a lifespan of 20 years.

Pandas that live in the wild have an average lifespan of 20 years. However, captive pandas live longer because of better food and nutrition, reaching up to 30 years.

The Beijing Zoo has a collection of many endangered species, including pandas.

Founded during the late Qing dynasty in 1906, Beijing Zoo is the oldest zoo in China. As one of the oldest public parks in the country, Beijing Zoo is well known for its collection of endangered animals. Among these endangered species are giant pandas, red pandas, South China tigers, golden snub-nosed monkeys, and snow leopards.

A female panda can mate with several male partners that compete over her since males would often look for different females who are in heat. Female pandas have birth rate of around 1 cub every 2 years.

Females can only mate within 24 to 72 hours.

Unlike dolphins that can mate for 3 months, a panda’s heat period only lasts for 24 to 72 hours. Since pandas only go in heat every 2 years, male pandas become extremely competitive so they won’t miss their chance to mate. Generally, pandas approach sexual maturity at the age of 5 to 6 years old.

Pandas are strong climbers and swimmers.

Despite being born helpless, pandas can climb trees as early as 7 months old. Much like other bears, these giant pandas are also strong swimmers. However, they don’t regularly spend much time swimming, since they don’t hunt any marine life.

In contrast to most bears, pandas don’t hibernate during the winter season. Instead, they go down the mountains in colder seasons to seek a warmer temperature. Since most of its diet is bamboo, pandas can’t store much fat, which is crucial when bears hibernate.

Pandas prefer to be alone.

Another similarity shared with their relatives is that giant pandas are solitary species. Pandas usually don’t live together with their family. Female pandas have distinct territories and choose to be alone. This also applies to males, except for mating season. After mating, female pandas raise their cubs alone.

When a baby panda reaches 9 months old, it will be completely weaned and leave the company of its mother once she becomes pregnant again. Typically, this takes around 18 months.

At full speed, a panda can run around 32 kilometers per hour. As cute as they may look, pandas can defend themselves with their strong built and jaws. Definitely one of the panda facts to take note of if you encounter one in the wild.

Adult pandas only have a few predators.

China started giving away pandas from the Tang dynasty.

China has offered its giant pandas as diplomatic gifts throughout history, even becoming known as ‘Panda diplomacy.’ This practice traces back to the 6th century, the when the Tang dynasty Empress Wu Zetian sent pandas to Emperor Tenmu of Japan.

China loans off pandas to other countries.

In the 1970s, China gave pandas to American and Japanese zoos as gifts, which formed an important part of Chinese diplomacy. This giveaway was also the first cultural exchange between China and the US. Since then, pandas rose in popularity, and other nations began asking China for pandas.

Starting in 1984, China stopped giving away pandas for free. Instead, they loaned them off for $1 million a year. These loan plans usually only allow countries to hold pandas for 10 years. Simply put, all pandas in the world are owned by the Chinese government. How’s that for neat panda facts?

When China loans pandas, there is also an agreement that any cubs born during the loan officially become Chinese property. Hence, these cubs must be returned to China.

Pandas often leave scents for their own kind.

Through their odors, they can easily determine if there is another panda in the area. Furthermore, pandas can tell if odor marks are old or new, and can even distinguish if it’s a male or female panda. Female pandas leave their odor once they are in heat, which helps the males track them.

Pandas are the only bears with thumbs.

Compared to other bears, pandas stand out for the special bone found on their wrists. The panda’s sixth toe is used for grasping bamboo. Although they aren’t fully opposable, this bone functions similarly to human thumbs – mainly used by pandas to grip their favorite bamboo.

The ancient Chinese believed that pandas have mystic abilities. During the Han Dynasty (206BC to 24AD), pandas were regarded as semi-divine as some of them were found in the emperor’s garden.

Stricter laws and people's awareness are saving the panda's population.

Over the years, human activity has caused a great decline in the population of pandas. Aside from the destruction of their natural habitat, pandas have also been hunted for the illegal trade of their fur. Thankfully, due to stricter laws and raised awareness, the panda population has steadily increased since 2003.