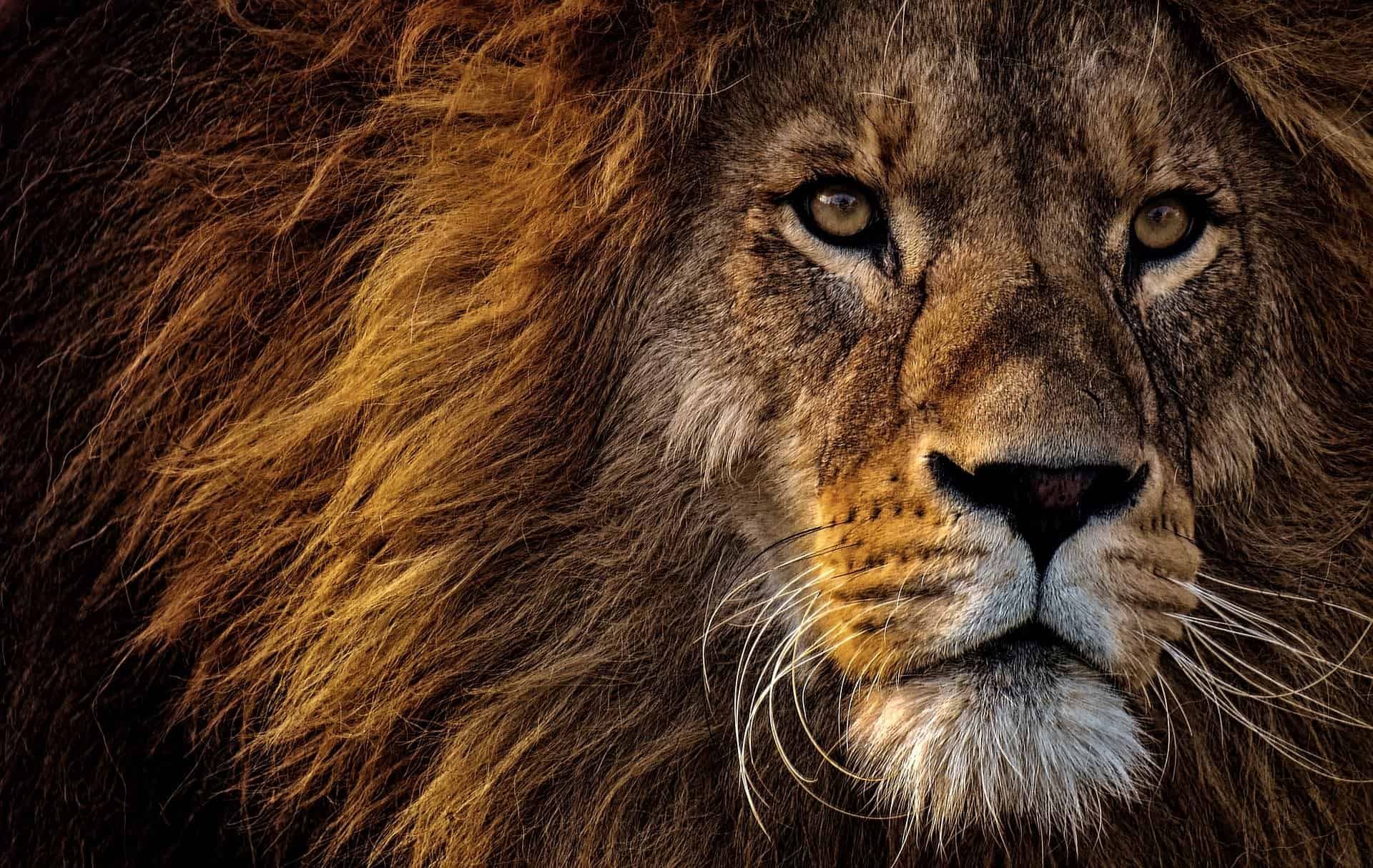 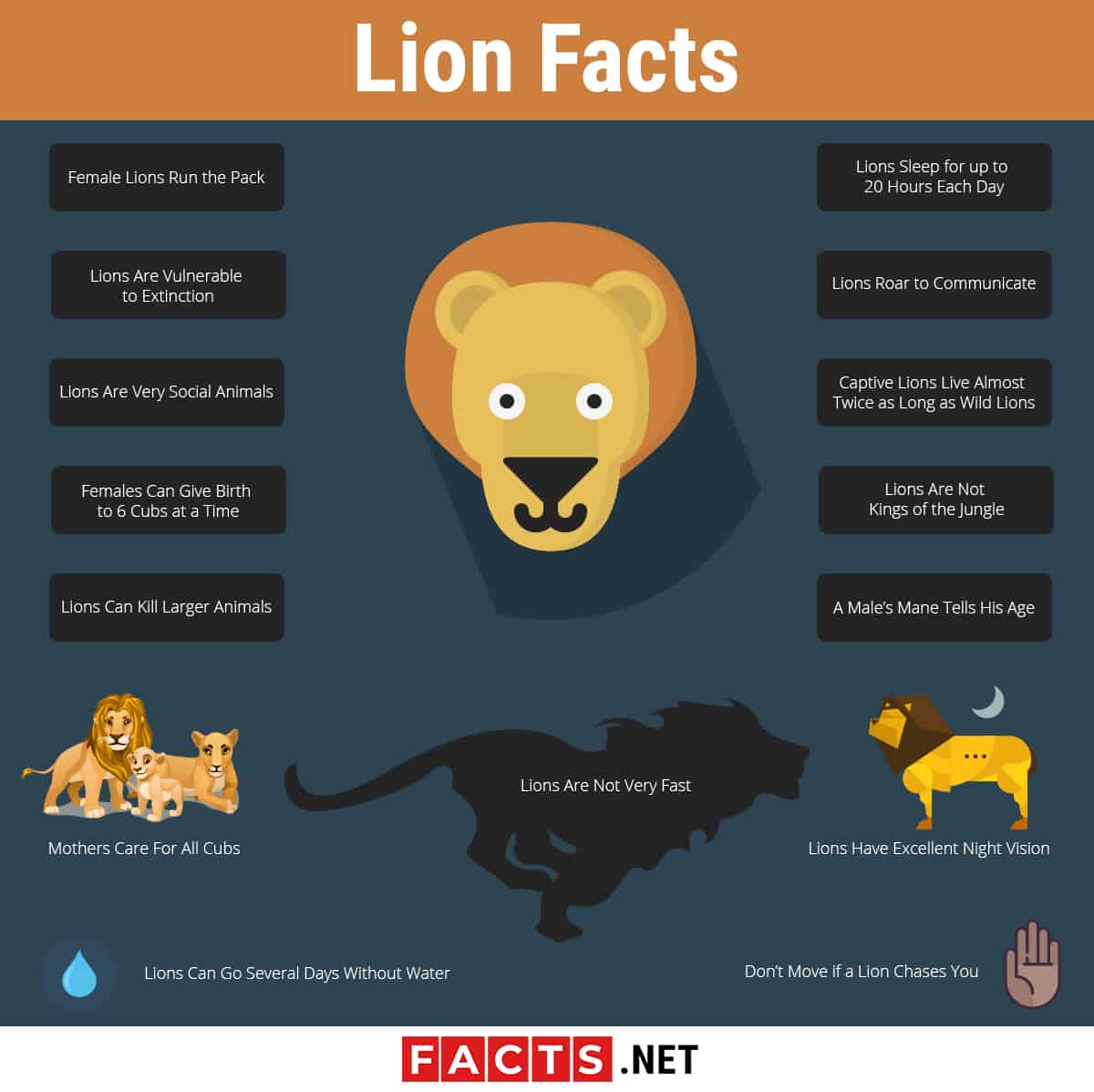 Lion facts show that female lions are responsible for 80-90% of the hunting for the pack. The females are usually healthier, and are more efficient hunters than the males. Female lions hunt together to ensure success. Males are responsible for protecting the pride and its surrounding territory. Although the females secure the food, the males are the first to eat, followed by the females, with the leftovers going to the cubs.

Lions Are Not Very Fast

It is often thought that lions are able to run quickly to catch their prey, but lion facts show that their average speed is usually only around 30 miles per hour. They are able to reach speeds of over 50 miles per hour, but only for a few minutes at a time. This has led lions to develop unique hunting techniques. They will either sit near a pond waiting for their prey to drink water, or will stalk their prey and hide behind bushes and other features of the landscape. Both of these techniques allow the lions to be within close range of the prey, giving them a better chance of catching their dinner.

Lions Sleep for up to 20 Hours Each Day

The lion is considered a nocturnal animal. During the day, a lion does not do much. Because lions hunt after dusk, their days are filled with lounging and relaxing. On average, a lion will sleep for between 16 and 20 hours a day. Once the sun sets, lions begin to stir and get ready for the evening. This is also the time when they socialise and groom. If their hunt is successful, meals usually last for around one hour. The rest of the lion’s time is spent guarding their territory.

When members of a pride need to communicate, they will roar. The lion’s roar is so loud that it can be heard up to 5 miles away. Cubs are not usually vocal until they reach 2 years of age. If a lion is welcoming another lion, it will rub its head against the newcomer. Lions can also growl, hiss, and snarl, but they do not purr like domestic cats do.

Lions Are Vulnerable to Extinction

By far the biggest threat to lions is humans. Lions were found throughout much of Europe at one point, but were hunted to extinction in Italy and Greece around 2,000 years ago. They also were found throughout Asia, the Middle East, and all of Africa. Today, estimates put the lion population at 30,000 and they are only found in seven counties in Africa. These countries are Botswana, Ethiopia, Kenya, South Africa, Tanzania, Zambia and Zimbabwe. It is still legal in some areas to hunt lions, and most hunters seek out the largest lion, which is usually one of the leaders of the pride. This then puts the younger and smaller lions at risk.

Lions live together in strong social groups. Lion facts show that each pride is usually made up of 5-15 related females and their cubs, along with a single male lion. The male lion patrols the territory, marking trees and rocks with urine. If an intruder does come near, the male will warn them with a loud roar. A male lion is always under the threat of being replaced by a stronger nomad lion, who may instigate a fight in an attempt to take over the pride. The females spend their time raising their young together and hunting in packs.

Females Can Give Birth to 6 Cubs at a Time

Lions are able to begin reproducing by the time they are between 2 and 3 years old, but usually will wait until the pride has been established. Once impregnated, the female enters a 4-month long gestation period. She will give birth to 2 cubs on average, but can have anything up to 6 cubs. The cubs are born blind and are in need of constant protection. Fewer than half of cubs live to be older than one year, and of the ones that do, 4 out of 5 will die before they reach the age of 2. They are usually killed by animal attacks or die from starvation.

Lion facts tell us that these animals are carnivorous and survive solely by eating other animals. The female lions work together to catch prey for the entire pride. The animals that they hunt include buffalo, wildebeest, giraffes, zebras, gazelle and warthogs. They will also steal a carcass from another animal, should the opportunity arise. They eat all of the meat on the animal, including the intestines and eyes.

Lions Are Not Kings of the Jungle

The common phrase calls lions “the king of the jungle”. However, lions do not live in jungles, but instead tend to live in grasslands and on plains. The saying may have come from an incorrect assumption of the animal’s habitat, or may refer to a less literal meaning of the term jungle. Africa is often referred to as a vast jungle, and lions are the king of the food chain in the animal population of Africa.

A Male’s Mane Tells His Age

Lion facts tell us that all male lions have a mane, or a halo-shaped fur collar around their head. Each mane is unique and can vary in colour. Most are yellow and brown, but black is not unheard of. Studies have been conducted that show the colour of the mane is important to a male lion’s reputation. The lighter the mane is, the more that the lion is attacked in an attempt to take over his pride. If a lion has a darker mane, he tends to attract more females. The research showed that there is a link between a lion’s strength and the colour of his mane. In lions that have been seriously injured, manes can actually deteriorate and fall out.

Mothers Care For All Cubs

More than one female lion will give birth at the same time, due to the large numbers of females in a pride. Some mothers embrace their cubs, while others tend to get bored with them and abandon them. A female lion will allow any cub to feed from her though, preventing starvation. If a new male lion takes over the pride, they will often kill all of the cubs, which is something that the female lions can’t fight.

Lion facts tell us that these big cats have fabulous night vision. They are six times more sensitive to light than humans and can see much better than most of their prey can. This is a large advantage when they are hunting at night. Even with this advantage, however, hunts are successful only half the time, and most of their food comes from scavenging.

During droughts or a migration, water can be hard to come by in a lion’s habitat. They are luckily able to go up to five days, sometimes longer, without water. If they come across water several times during a day, they will always drink some. If a lion lives in an area where water is very scarce, it is able to obtain the necessary water from the stomach contents of its prey.

Don’t Move if a Lion Chases You

While lion attacks on humans are rare, if you do find yourself in a situation that brings you in close contact with a lion, remain calm. A lion will only attack a human if it feels threatened. If a lion does charge you, remain still. This will confuse the animal as to why you are not scared, and it will usually lose interest. Easier said than done though, right? 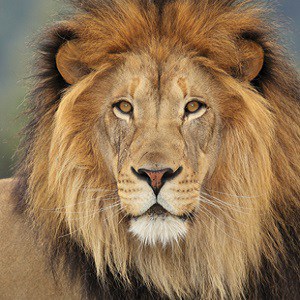 Lion facts focus on the behavior and traits of this majestic animal. Often feared, lions are one of the largest mammals, and have fascinating behaviors. These facts focus on their impressive hunting skills, their daily routines and how to survive a lion attack.