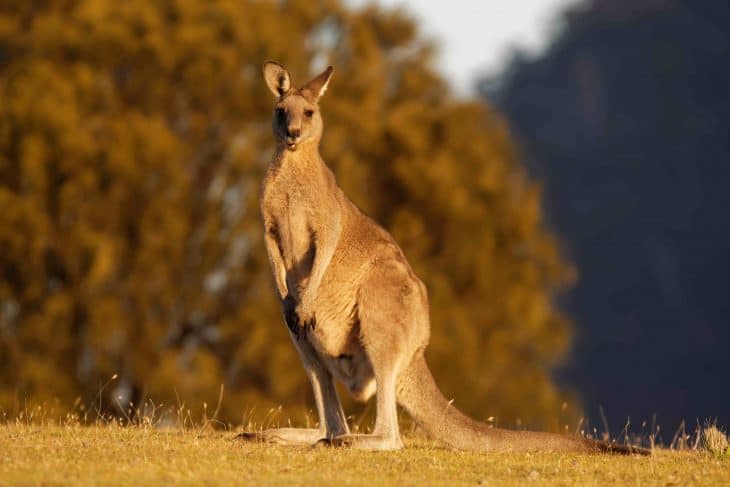 Most people who haven’t been to Australia probably wonder about the kangaroo facts surrounding these famous marsupials. When you hear about kangaroos, the instant image that pops in your head is the four common species with the genus Macropus. However, the marsupial genus from the Macropodidae consists of 14 species other than the four kinds of kangaroos that we know of.

Learn more about these marsupials you might encounter in Australia with our list of kangaroo facts. Educate yourself on what you have to do when you happen to bump into the largest marsupial on the road. Browse through our breakdown of kangaroo facts and stay updated!

Table of Contents
01 The term "kangaroo" applies to various species with the genus Macropus.
02 From inside a kangaroo pouch, newborn joeys rely on their mothers to drink milk.
03 Kangaroos defend themselves by using their agile arms and powerful kicks.
04 Both male and female kangaroos have mind-boggling sexual and reproductive characteristics.
05 Only alpha male kangaroos can mate with female kangaroos.
06 In Australia, kangaroos outnumber the human population.
07 Kangaroos can use their tail for balance especially when attacking predators or humans who dare to go near them.
08 They live in groups that Australians call mobs.
09 Red Kangaroos live up to 23 years and grow as high as 6 ft (2 meters) tall.
10 Joeys finally peek out from inside the pouch after 4 to 6 months to graze on grass or small vegetation.
11 They don't develop sweat glands.
12 Most kangaroos showcase left-handedness.
13 A kangaroo's gestation period lasts for 4 to 5 weeks.
14 Some kangaroos willingly sacrifice their joeys to escape predators.
15 Despite being herbivores, kangaroos don't emit much methane.
16 Kangaroos need to hop to move from one place to another.
17 The larger marsupial wins in a battle between wallaby vs. kangaroo.
18 The antilopine kangaroo commonly resides in the tropical savannahs of Cape York Peninsula, Australia.
19 Kangaroos, especially males, love to show off their muscles.
20 Due to the kangaroo's large population, Australians commonly consume kangaroo meat.

The term "kangaroo" applies to various species with the genus Macropus.

One of the most unknown kangaroo facts centers on the marsupial genus Macropus. Contrary to what most believe, kangaroos belong to the family Macropodidae under the subfamily Macropodinae. The species included under this category are as follows:

The Parma Wallaby was thought to be extinct before the end of the 19th century. Fortunately, an extermination project in New Zealand led to the discovery of a surviving population of the small marsupials. The Toolache wallaby (Macropus greyi) was the original 14th species under the subfamily Macropodinae. However, experts presumed that the nocturnal marsupial succumbed to extinction in the late 1930s.

From inside a kangaroo pouch, newborn joeys rely on their mothers to drink milk.

Mother kangaroos need to use their muscles to pump milk down the throats of newborn joeys. They need to do this because the babies can’t suckle and swallow by themselves. Additionally, the mother’s milk changes its formulation to cater to the nutrition needed for the growing joey or joeys inside her pouch.

Kangaroos defend themselves by using their agile arms and powerful kicks.

One of the kangaroo facts that needs clarification is the marsupial’s way of attacking threats. People are more familiar with a kangaroo’s powerful kick that they forget about their agile and strong arms. Their defensive behaviors include holding an enemy in place using their claws before slashing or disemboweling. A wildlife worker once got attacked by a kangaroo and sustained internal injuries, broken ribs, and a collapsed lung.

Both male and female kangaroos have mind-boggling sexual and reproductive characteristics.

Marsupial’s private parts intrigue even the most experienced animal experts. The reproductive system of female kangaroos consists of three vaginas and two uteruses. Meanwhile, male kangaroos breed with their two-pronged penises. Amidst this surprising fact, kangaroos still mate like most mammals.

Out of all the kangaroo facts, feminists especially hate the superiority of male kangaroos when it comes to mating. In a mob of kangaroos, the males face off to become alpha. The victor then claims its prize by mating with all the females in their group while the losers cough in defeat. Because of this, weaker or beta male kangaroos violate other animals in the wild when in heat. This behavior includes mating with fellow males or other vulnerable mammals like pigs.

Kangaroos can easily outnumber the number of people residing in the Land Down Under. In 2015, Australia recorded a population of 24 million people while kangaroos had a whopping number of 44 million. A National Geographic article even dubbed the marsupials as Down Under’s most controversial pests.

Kangaroos can use their tail for balance especially when attacking predators or humans who dare to go near them.

Since they can’t walk, kangaroos use their tails to the fullest. Their tails function as an extra leg due to their similar power or force from their two hind legs. When against predators, these marsupials often use their tails to balance their bodies so they can produce a powerful kick. However, the strength and composition of their tail contribute to their inability to move backward.

They live in groups that Australians call mobs.

One of the most relatively unknown kangaroo facts revolves around the terms used to describe the group of large marsupials. The word “group” determines almost any large gathering of animals. Because of this, animal experts use various terminologies to differentiate each group of animals.

To describe a group of kangaroos, you can call them a troop, a court, or a mob. Australians commonly address a group of kangaroos as mobs. In a mob, all kangaroos follow a type of hierarchy where the males fight for dominance in hopes of claiming the sole right to mate with the females.

Yes, you read that right. A red kangaroo can grow up taller than most humans on Earth. Their kind is currently considered the world’s largest living marsupial. Red Kangaroos use their powerful hind legs to accelerate their hopping speed up to 35 mph. Additionally, spectators are left in awe with the strength of their bounding gait which allows them to leap up to 6 ft high.

To differentiate males and females, you only need to look closely at their build and fur coats. Australians call the females “blue fliers” due to their blue-grey coats and fast leaping. Elsewhere, the males stand out with their muscular arms and legs.

Joeys finally peek out from inside the pouch after 4 to 6 months to graze on grass or small vegetation.

A kangaroo facts list won’t be complete without entries about joeys and their development. After birth, these adorable marsupials stay inside their mothers’ pouches for months. They then leave the pouches now and then for grown-up food like grass or small shrubs after about 4 to 6 months. During this time, they continue to suckle on their mother’s milk for added nutrition. They completely leave the pouch after about 10 to 18 months.

It’s hard to imagine since they reside in Australia but, yes, kangaroos lack sweat glands on their bodies. To cool off, they use their saliva and lick their forearms until their fur coat is soaking wet. If the sun’s heat is too intense, kangaroos prefer to relax and let their forearms’ unique network of blood vessels cool them down.

Just like us humans, kangaroos exhibit the behavior of using a dominant hand. A study headed by Russian scientists from St Petersburg State University discussed the evidence showing kangaroos using their left hand during common tasks in the wild. Because of this, various experts concluded that the Australian marsupials are predominantly left-handed. The research marked a new display of population-level “handedness” behavior aside from humans.

A kangaroo's gestation period lasts for 4 to 5 weeks.

One of the most surprising kangaroo facts centers on the mammal’s unusual gestation period. After about 30 to 36 days, a joey is fully formed inside a kangaroo pouch with embryo-like features. Because of the short gestation period, mother kangaroos often get pregnant and carry more than one baby in their pouches. Some would hold off their pregnancy by freezing the new embryo until the current joey is developed enough to leave the pouch.

Some kangaroos willingly sacrifice their joeys to escape predators.

This might as well be the most heartbreaking entry in our kangaroo facts list. Kangaroos often prove their strength as fighters against certain predators. However, they still encounter formidable foes in the wild that they cannot escape from. When that happens, some female kangaroos throw their young to distract their assailant. The willing sacrifice may seem cold but their survival instincts outweigh any affection for the babies in their pouches.

Despite being herbivores, kangaroos don't emit much methane.

Scientists found a special type of bacteria present inside the kangaroo’s stomach. It metabolizes the vegetation that the kangaroo consumes without producing too much methane. Most cows and other livestock with herbivore diets release about 250 to 500 liters of methane every day. Thanks to their stomach’s unique bacteria, kangaroos do not contribute to the methane emissions as cows do.

Kangaroos need to hop to move from one place to another.

Another surprising entry in our kangaroo facts list involves their means of travel. The large marsupial has no other means of locomotion aside from hopping, jumping, or leaping. Kangaroo fossils found in Queensland, Australia also showed their main means of moving from one place to another. Because of this, scientists concluded that kangaroos have been using their bounding gait for millions of years.

The larger marsupial wins in a battle between wallaby vs. kangaroo.

The wallaby falls under the genus Macropus. Because of this, a wallaby can also be called a kangaroo. You may point out their difference in size and how a kangaroo would win a battle against a wallaby. But, at the end of the day, wallaby vs. kangaroo is like kangaroo vs. kangaroo.

Like most kangaroos, the antilopine kangaroo showcases sexual dimorphism wherein males appear with a reddish-tan coat, while females exhibit gray tones on their heads and shoulders. Sometimes called antilopine wallaroos, they mainly occupy the Cape York Peninsula’s tropical savannas where mobs socialize and graze vegetation. One of their unusual rituals includes the grooming between males before going head-to-head in ritual combats. The result of the fights often determines who becomes the next alpha.

Because antilopine kangaroos like to socialize, their troop usually consists of more than 30 marsupials. When around threats, mobs may either assemble or separate depending on the predator. Due to their habitat’s tropical weather, antilopine kangaroos adjust their grazing or foraging periods when the environment is dryer.

Kangaroos, especially males, love to show off their muscles.

This fact about the large marsupials especially applies to Red Kangaroos and Eastern Grey Kangaroos. The larger species of male marsupials often build up large biceps due to going through multiple ritualistic fights. Victors or alpha males usually flex their arms to assert dominance over inferior males and to attract females.

As mentioned, the population of kangaroos outnumbers the human population in Australia. As a means of controlling the large marsupials’ overpopulation, Australians, especially indigenous communities, decided to add kangaroo meat to their diet. Surprisingly, the new staple food became a healthier alternative due to its high protein and low-fat content.

Various facts are discussing the colorful lives of kangaroos. Thanks to their large numbers, scientists can easily conduct studies on the hopping mammal. Despite their vast population, kangaroos may still suffer from global warming because of their herbivorous diet. In the future, they still might outnumber the Australian population but hopefully with a better and cleaner environment. To conclude our list, we hope our compilation of kangaroo facts will prove useful for your future trip to the Land Down Under.