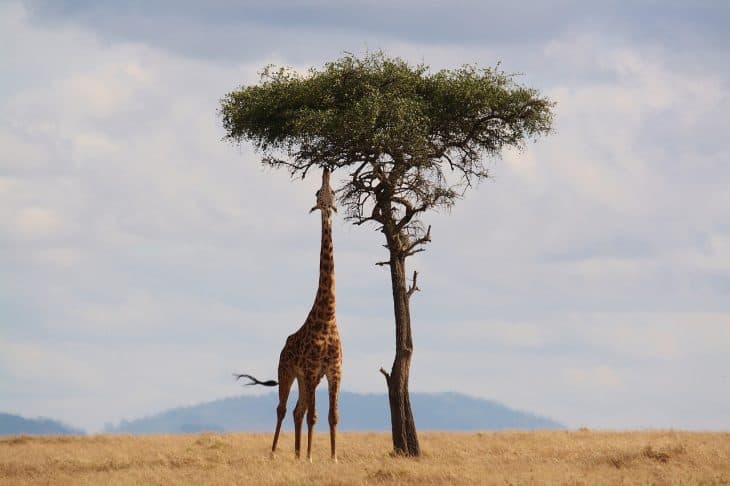 Giraffes are the gentle giants of the jungle. Aside from being the tallest animals in the world, what else is there to know about giraffes? Take a closer look at these creatures’ diet, behavior, and other unique traits with these giraffe facts.

Quick Facts
Essential Facts
Interesting Facts
Table of Contents
01 Giraffes were once called "camel-leopards."
02 Giraffes originated from the savanna areas in the Sub-Saharan region of Africa.
03 The West African Giraffe came close to extinction.
04 The Rothschild's Giraffe got its name from Walter Rothschild.
05 The giraffe's tongue is 20 inches long.
06 The Reticulated Giraffe is the "most common" in the world.
07 The Masai Giraffe is the biggest subspecies of Giraffe.
08 The Angolan Giraffe only exists in 4 African countries.
09 The South African Giraffe is only found in 5 African countries.
10 Necking is the most violent experience for giraffes.
11 A giraffe's spots are like human fingerprints.
12 Giraffes only sleep 30 minutes a day.
13 Giraffes make many sounds and noises.
14 A group of giraffes is called "tower."
15 Giraffes consume over 35 kilos of food per day.
16 Calves drink milk from their mother for the first four to six months.
17 Giraffes are not territorial.
18 Male giraffes can fight with each other to get the right to mate with the females.
19 Giraffes are the third heaviest animals in the world.
20 A giraffe's heart weighs around 25 lbs.
21 A running giraffe may appear to be moving in slow-motion.
22 Giraffes are not entirely defenseless.
23 Giraffe horns are called ossicones.
24 Giraffe hooves are almost the same size as a dinner plate.
25 Some people eat giraffes.
26 The giraffe's individual numbers continue to plummet.
27 Giraffes are endangered due to 4 main reasons.
28 Male giraffes can test a female's fertility.
29 World Giraffe Day was established in 2014.
30 White giraffes are a product of rare pigmentation.

Giraffes were once called "camel-leopards."

It may sound like the most unlikely combination of animals, but it’s true:

When the first giraffe was brought to Europe and presented to Julius Caesar in 46 BC, the Romans believed it was a combination of a camel and a leopard. Hence, the species name Camelopardalis. It comes from the Greek “Kamelos,” which means “camel,” and “Pardalis,” which means “leopard.” Bet you didn’t expect that for giraffe facts?

Giraffes originated from the savanna areas in the Sub-Saharan region of Africa.

Giraffes originated from the savanna areas in the Sub-Saharan region of Africa. Today, the International Union for Conservation of Nature (IUCN) recognizes the giraffes as one species with 9 subspecies. However, a 2007 study on the genetics of giraffes advised that there should be 6 species instead: the West African, Rothschild’s, Reticulated, Masai, Angolan, and South African giraffe.

Also known as the Nigerien giraffe, the West African giraffe is distinguished for its light-colored spots. The Nigerien giraffe population fluctuates based on seasonal migration within the drought-resistant lowlands of the Niger River valley and the drier highlands near Kouré.In the 1990s, its population went as low as 50 individual giraffes. However, with the help of the government’s programs over 450 wild giraffes have been rehabilitated.

The Rothschild's Giraffe got its name from Walter Rothschild.

The giraffe's tongue is 20 inches long.

The giraffe’s tongue can reach up to 20 inches long. The giraffe tongue is usually colored black, blue or purple to protect against the sun’s UV rays. Now that’s one for giraffe facts that’ll get you tongue-tied.

The Reticulated Giraffe is the "most common" in the world.

Originating from a peninsula called the Horn of Africa, the Reticulated giraffe is the most common giraffe seen in zoos. The Reticulated giraffe’s coat has large, polygonal, liver-colored spots outlined by a group of bright-white lines. The spots can often appear in deep reddish-orange, which can also cover their legs.

The Masai Giraffe is the biggest subspecies of Giraffe.

The biggest subspecies of giraffe is the Masai giraffe. Found in Kenya and Tanzania, it has distinctive, jagged, irregular, star-like blotches that extend to their hooves. The Masai giraffe got its name in honor of Herr von Tippelskirch. He is a member of a German scientific expedition in East Africa.

The Angolan Giraffe only exists in 4 African countries.

Found in Northern Namibia, South-western Zambia, Botswana, and Western Zimbabwe, the Angolan Giraffe subspecies has big brown blotches with edges that are relatively notched or have angular extensions. Its spotting pattern stretches down to its legs, but not the upper part of its face.

The South African Giraffe is only found in 5 African countries.

Necking is the most violent experience for giraffes.

Necking is the proper term for “giraffe-fighting.” In a giraffe’s environment, it is the most aggressive experience they are most likely to get in. Necking usually comes with head-butts, jousting, kicking, and biting.

Aside from the fact that giraffes have seven vertebrae the neck like humans, its spots in the body are much like human fingerprints. All the colored-spots of the Giraffe have different patterns. How’s that for cool giraffe facts?

Giraffes only sleep 30 minutes a day.

To protect themselves from predators, giraffes in the wild learn to sleep for only 30 minutes a day. If you think that’s extreme, here’s another one for giraffe facts: a giraffe’s total sleeping time is spread throughout the day in quick naps. However, in captivity giraffes can snooze more than 4 hours a day.

Giraffes make many sounds and noises.

Contrary to the belief of many that giraffes don’t make a sound or noise, giraffes do hiss, snort, make “whistle-like cries,” as well as create low-frequency noises that can’t be heard by the human ear. In other words, giraffes have vocal cords. Typically, young giraffes make most of these sounds since they are less cautious. Definitely one of the cooler giraffe facts.

A group of giraffes is called "tower."

One of the giraffe facts you can’t miss: A group of giraffes is called a “tower,” which is only fitting as it is the tallest animal on Earth.

Giraffes consume over 35 kilos of food per day.

Calves drink milk from their mother for the first four to six months.

Baby giraffes or calves only breastfeed for the first 4-6 months. From the 7th month onwards, the calves begin to eat leaves. However, if the calves still can’t reach the leaves from the trees, their mothers will pull leaves off and feed them to them. Isn’t that one for cute giraffe facts?

Giraffes are not territorial.

Giraffes are very social creatures, and they are not territorial at all. A tower of giraffes typically has 10 to 20 members without a dominant leader in their herd. Tower members are usually free to come and go as they wish.

Male giraffes can fight with each other to get the right to mate with the females.

Giraffes may be one of the most social animals on the planet, but they still fight with each other for their mates.

Giraffes are the third heaviest animals in the world.

A young giraffe can weigh more than 150 lbs. On average, an adult giraffe approximately weighs 1,765 lbs. After the elephants and rhinos, giraffes are the 3rd heaviest animals in the world, and in some cases, other species of Giraffe can be as massive as 4,255 pounds.

A giraffe's heart weighs around 25 lbs.

While the human heart only weighs around 300 grams, the heart of a giraffe can weigh 25 pounds, making it the biggest heart of any land mammal. The giraffe’s heart pumps 60 liters of blood in their body every minute.

A running giraffe may appear to be moving in slow-motion.

If you observe a running giraffe in the wild, it may look like it’s running in slow motion. However, since giraffes have the longest stride of all land mammals, its “slow-mo” movement reaches speeds of 60 km/h. Unlike horses, giraffes run by moving both legs on the same side of their body together, which makes them look like they’re running in slow-mo.

Giraffes are not entirely defenseless.

The giraffe’s gentle nature might make it seem like giraffes would run from an attack, but giraffes are not entirely defenseless. One kick from a giraffe’s 6 ft legs can cause severe damage and even death for its pursuers.

The horn of the giraffes are called ossicones (horn-like or antler-like bumps on the heads). Both males and females have ossicones which were formed from ossified cartilage covered in skin.

Giraffe hooves are almost the same size as a dinner plate.

With a diameter of 30 centimeters, a giraffe’s hooves are almost the size of a dinner plate. Their big hooves protect them from sinking into loose sand, regardless of their massive weight.

In some places in Africa, people kill giraffes for their meat. In those areas, natives would consume any kind of meat that they can find for survival. The giraffe has a natural sweetness that may not be to everybody’s taste, and many say that it is not as tasty as other animals. Now that’s one of the giraffe facts to chew on.

Thirty years ago, there were around 150,000 giraffes that roamed the savannas. However, as of today, the number of wild giraffes still roaming their habitats has been cut down by 40%-50%.

Giraffes are endangered due to 4 main reasons.

World Giraffe Day was established in 2014.

The World Giraffe Day is a yearly event and gathering initiated by the Giraffe Conservation Federation to celebrate the longest-necked animal on the longest day of the year: June 21st.

White giraffes are a product of rare pigmentation.

A White giraffe is a product of leucism which inhibits an animal’s skin cells from producing pigment but lets other organs stay dark-colored. Differing slightly from albinism, a white giraffe rarely occurs in nature. However, their numbers are lessened more so by poachers.

On March 11, 2020, poachers slaughtered two white giraffes in Kenya. According to Kenya officials, it was a sorrowful day since the Ijara are the only community in the world that houses the rare white giraffe.