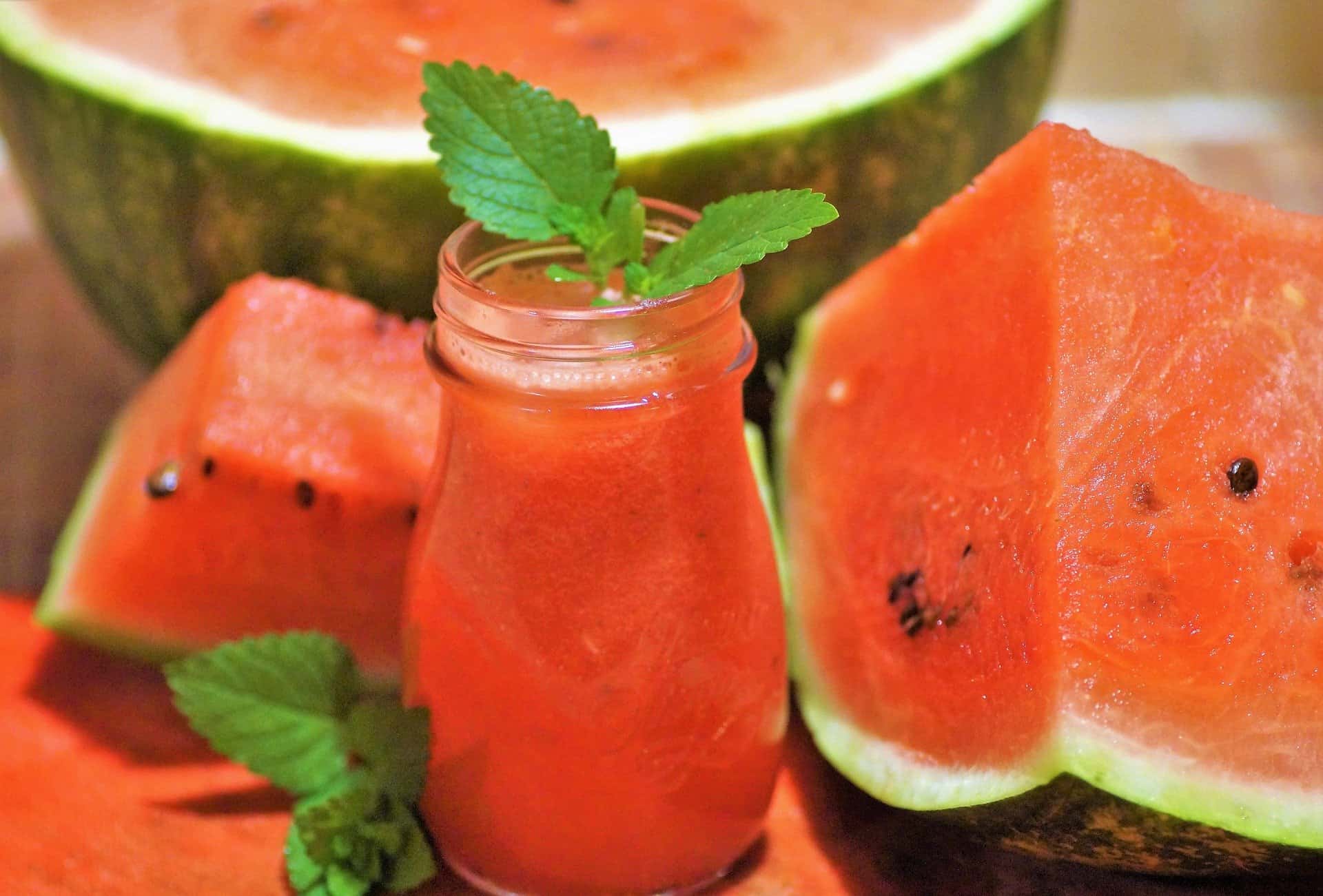 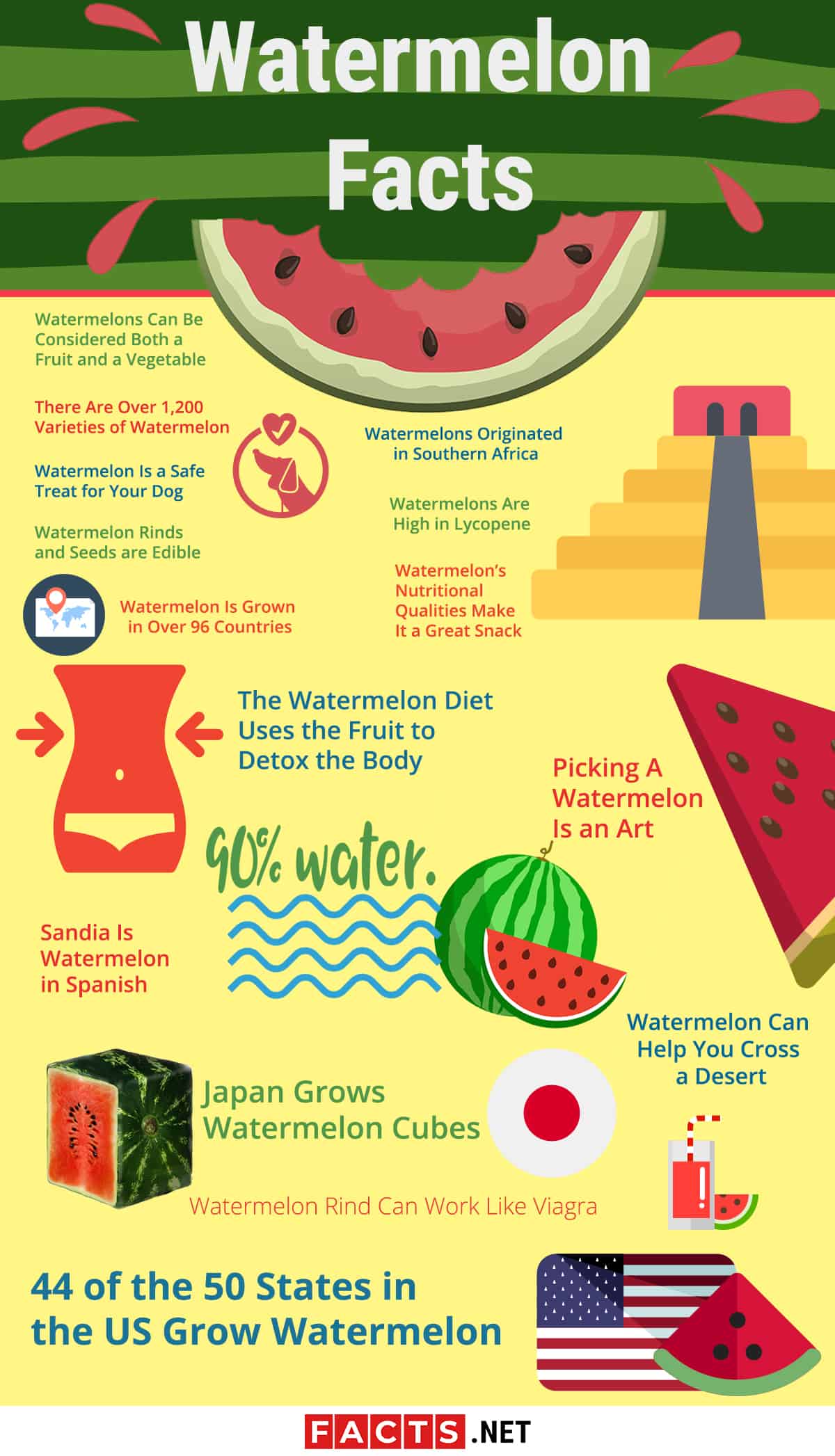 Genetic investigation has shed light on the origins of the watermelon. According to watermelon facts, this delicious fruit is believed to have derived from an ancestor plant in Namibia, Africa. Watermelon has had a rich history. Evidence of watermelons was found in the tomb of King Tut, and watermelons are even mentioned in the Bible.

Watermelons Can Be Considered Both a Fruit and a Vegetable

There Are Over 1,200 Varieties of Watermelon

Watermelon facts indicate there are over 1,200 varieties of this amazing fruit. Imagine putting all of those on your bucket list to try! Watermelons can be various shapes, sizes and weights. In addition, they can be red, orange, yellow or white. Some varieties that you may find in your local supermarket are: Carolina Cross, Densuke, Yellow Crimson, Moon & Stars, Melitopolski, Cream of Saskatchewan and Orangeglo.

Watermelon Is a Safe Treat for Your Dog

Watermelon can be a nice, juicy treat for your dog. Dogs can eat watermelon safely, but you should take care not to feed them the seeds or the rind. It is safe to give your pup 1-3 pieces of watermelon cut into 1-inch sized wedges. Watermelon is a good source of vitamins C and A, potassium, magnesium and, of course, water.

Watermelon Rinds and Seeds are Edible

The inside of the watermelon isn’t the only part that’s edible. Watermelon facts tell us we can also eat the rinds and the seeds! The rind contains chlorophyll and citrulline. The seeds contain iron, protein, fiber and zinc. In China, watermelon rind is often eaten as a vegetable and thrown into stir-fries. Watermelon rinds can also be blended into smoothies or eaten pickled.

Watermelons Are High in Lycopene

The tomato is often touted as a great source of lycopene. Surprisingly, watermelons have more lycopene than tomatoes! Lycopene is an antioxidant that is important for a healthy diet and can reduce the risk of stroke and possibly ovarian cancer.

Watermelon Is Grown in Over 96 Countries

The beloved watermelon is grown in many locations worldwide. Watermelon facts indicate that over 96 countries grow at least one of the 1,200 types of watermelon. The top five watermelon producing countries are China, Turkey, Iran, Brazil and the United States.

The Watermelon Diet Uses the Fruit to Detox the Body

The Watermelon Diet is a fruit cleanse that is believed to help you detox your body. There are a couple of different ways to go about this diet. One of the popular methods is to eat only watermelon for five days. Gradually, other foods are added into your daily diet, while you still mainly eat watermelon. A second method involves a heavy dependence on watermelon, while also eating specific portions of other foods.

Picking A Watermelon Is an Art

Sandia Is Watermelon in Spanish

Sandia is the Spanish word for Watermelon. The Sandia Mountain Range in New Mexico is so-called because when the sun sets, it takes on a pinkish hue like a watermelon. The mountains are popular sight among locals and visitors in Albuquerque.

Japanese farmers have engineered a way to grow cubed watermelons. They place the watermelons in glass boxes and, as they expand, they fill the shape of the box. Cubed watermelons are easier to stack and also fetch a higher price.

Watermelon Can Help You Cross a Desert

The San people near the Kalahari Desert eat a type of watermelon they call tsamma. When they are crossing the desert, they eat tsamma and feed it to their animals. They do this not just for nutrition, but also to take advantage of the water the watermelon provides. It is believed that humans can live off tsamma alone for six weeks.

The body converts citrulline, an amino acid found in the watermelon and in higher concentrations in the watermelon rind, into arginine. Arginine, another amino acid, relaxes and expands blood cells in the same way Viagra does. It may even increase libido. Watermelon facts show these amino acids are good for the immune system and can help people with high blood pressure.

44 of the 50 States in the US Grow Watermelon

Watermelon is such a versatile plant that it is now grown in 44 of the 50 states in the United States. California, Texas, Georgia, Florida, and Arizona are the largest US producers of watermelon.

It’s not surprising that we call them watermelons. These large fruits are 92% water! Another 6% is composed of sugar.

Watermelon is a popular fruit that also happens to be considered a vegetable by some people. It originated in Southern Africa and has gained popularity all over the world. Over 96 countries grow watermelons. China is the largest producer of this healthy treat. Watermelon has numerous health benefits thanks to its amino acids and is safe to feed to dogs.