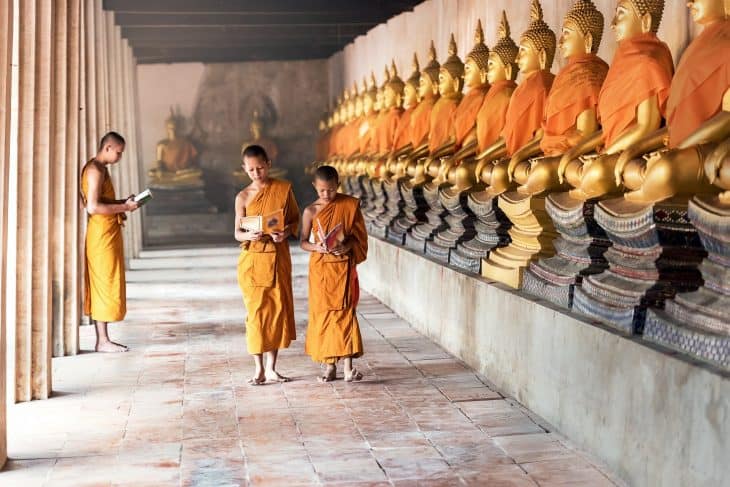 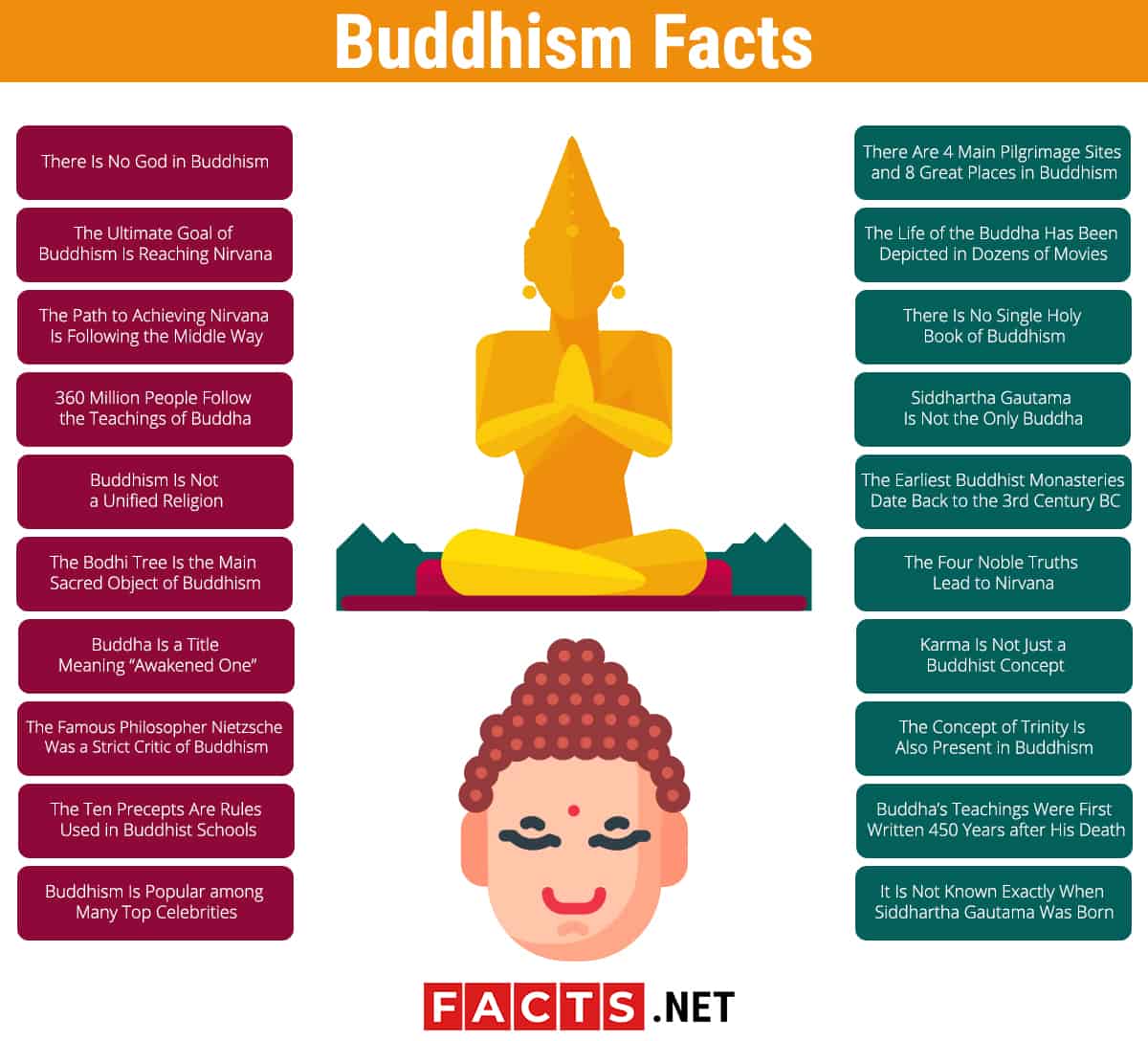 There Is No God in Buddhism

Buddhism facts reveal that Buddhism is defined as a non theistic religion, but the relationship of Buddhist teachings and god(s) is a complicated one. Buddha himself rejected the existence of a creator deity, but the notion of divinity is not incompatible with his teachings. In fact, there are gods found in Buddhist teachings, but these are considered to be inferior to Buddha and not necessarily wiser than us.

In conclusion, the concept of god(s) exists in Buddhism, but is not central to the religion, in contrast to Christianity, for example. While most experts agree that this makes Buddhism a non theistic religion, there are also some who believe that naming Buddhism non theistic is overly simplistic…

The Ultimate Goal of Buddhism Is Reaching Nirvana

According to the Buddhist teachings, we are all prisoners of samsara, the continuing cycle of death, re-birth and suffering. The highest goal is to end this suffering by extinguishing three fires (passion, ignorance and aversion) and thus attaining Nirvana. There are differences among different schools of Buddhism in understanding Nirvana, but all hold up the concept as one worth following.

The Path to Achieving Nirvana Is Following the Middle Way

In the first teaching following his awakening, the Buddha revealed the Noble Eightfold Path (the Middle Way) as the way to achieve Nirvana. The Middle Way is a path of moderation, avoiding the extremes of sensual indulgence and self-mortification, consisting of eight factors: right view, right intention, right speech, right action, right livelihood, right effort, right mindfulness and right concentration.

Buddhism facts show that Buddhists account for about 6% of the world’s population, making this the 4th biggest (in terms of followers) religion in the world, following Christianity with 2 billion followers, Islam with 1.3 billion followers and Hinduism with 0.9 billion followers. It is also interesting to note that if the group of nonreligious people (including agnostics) is added to the statistics, Buddhism falls to 5th place.

Buddhism Is Not a Unified Religion

There are two traditional schools of Buddhism: Theravada (“The School of the Elders”) and Mahayana (“The Great Vehicle”). They each interpret certain aspects of Buddha’s teachings in their own way. While these two branches of Buddhism are widely known, many people don’t know that there is a third branch: Vajrayana (also known as Tantric Buddhism or the Diamond Way). This is sometimes considered a part of Mahayana, although it’s very different in various concepts.

Theravada is nowadays most popular in Sri Lanka and Southeast Asia, and is considered to be the largest branch, followed by approximately 56% of all Buddhists. Mahayana is most popular in East Asia, including China and Japan, and is followed by roughly 38% of all Buddhists. Vajrayana is practiced in Mongolia and Tibet and represents about 6% of followers of the Buddha’s Way.

The Bodhi Tree Is the Main Sacred Object of Buddhism

The Bodhi Tree was a large sacred fig tree in India where Siddhartha Gautama, on whose teachings Buddhism is founded, is believed to have achieved enlightenment regarding the true nature of things (“Bodhi”). Although the original Bodhi Tree doesn’t exist anymore, there are three other holy Bodhi Trees that are believed to be propagated from the original tree: Bodhi Tree at the Mahabodhi Temple in Bodh Gaya, India, the Anandabodhi tree in Sravasti, India, and the Jaya Sri Maha Bodhi in Anuradhapura, Sri Lanka. Sacred fig trees are usually planted in the vicinity of all Buddhist monasteries.

These 4 pilgrimage sites are also the first 4 of the 8 Great Places, joined by the ancient cities of Sravasti, Rajgir, Sankassa and Vaishali, where special historical miraculous events are reported to have taken place.

Buddhism facts reveal that Gautama Buddha has inspired many filmmakers over the last century, starting with Dadasaheb Phalke’s Lord Buddha (originally “Buddhadev”) in 1923. The most famous of them, at least to the Western audiences, is Bernardo Bertolucci’s Little Buddha from 1993, featuring Bridget Fonda, Keanu Reeves and Chris Isaak.

There Is No Single Holy Book of Buddhism

Most religions are known for their central holy text, such as the Bible for Christianity and Judaism, and the Quran for Islam, but Buddhism has no such single writing. Instead, Buddhists consider the buddhavacana (“the Word of the Buddha”), works believed to be original Buddha’s teachings, as holy. Pali Canon, Kangyur, Taishō Tripiṭaka, Mahayana Sutras, the Tibetan Book of the Dead and others thus all serve as sacred texts of Buddhism for the various schools of Buddhism practiced around the world.

Siddhartha Gautama Is Not the Only Buddha

Although Buddhism is based on his teachings, Buddhists believe there were other Buddhas before him. Theravada Buddhism teaches of 28 Buddhas (the last being Gautama Buddha, another 27 coming before him), while Mahayana Buddhism also recognises various other Buddhas of celestial origin. However, they both believe that the next Buddha will be the one named Maitreya (Metteyya).

The Earliest Buddhist Monasteries Date Back to the 3rd Century BC

These were not monasteries as we know them today, but sacred caves, found in the Deccan Plateau area of India. But, by the 2nd century AD, Buddhist monasteries, known as “Viharas” in India, already had a standard structure, consisting of a walled quadrangular court that was surrounded by small cells.

And yes, the term “Dukkha” means the all-present suffering that is the main “antagonist” in Buddhist teachings.

Karma Is Not Just a Buddhist Concept

Although it is one of central concepts in Buddhism, Karma is not exclusive to the teachings of Buddha. It is also one of the key concepts in Hinduism, Taoism, Jainism and Sikhism. And what does it mean? It means action, work or deed, but in relation to religious teachings, it means the spiritual principle of cause and effect, in which intents and actions of an individual influence that individual’s future. In plain terms: the more good one does, the better his life will be, and the more evil one does, the worse his life will be.

The Concept of Trinity Is Also Present in Buddhism

Practically all Westerners know the Christian concept of the Trinity: the Father, the Son and the Holy Ghost, but a similar concept is also present in Buddhism – a religion that is often understood as being non theistic. The Buddhist trinity refers to the Three Jewels: the Buddha, the Dharma (Buddha’s teachings) and the Sangha (the community of Buddhists). Buddhism facts also reveal that people have been known to notice some similarities between the two…

Buddha’s Teachings Were First Written 450 Years after His Death

In the first 400 years after Gautama Buddha’s life, they were preserved only orally. They were first written down during the Fourth Buddhist Council in Sri Lanka in 29 BC, and are nowadays known as the Pali Canon or the Tipitaka.

It Is Not Known Exactly When Siddhartha Gautama Was Born

Buddhism facts show that the father of Buddhism was born either in 536 BC or in 480 BC. Similarly to his teachings, the details of his life were also passed orally from generation to generation for the first few centuries, and that is why there are no completely reliable sources regarding the date of his birth. What is known for certain is that he was born in Nepal.

Buddha Is a Title Meaning “Awakened One”

This also explains the fact that Buddhists believe there were many Buddhas prior to Siddhartha Gautama. The term can be applied to anyone who has awakened and realised the true nature of things, but according to Buddhist teachings there have not been that many, since Gautama was the last Buddha among us…

The Famous Philosopher Nietzsche Was a Strict Critic of Buddhism

According to Buddhism facts, Friedrich Nietzsche, the famous German philosopher from the 19th century, has referred to Buddhism more than a hundred times in his works. His main criticism was that Nirvana, the ultimate goal of traditional Buddhist philosophy, is actually a form of nihilism.

The Ten Precepts Are Rules Used in Buddhist Schools

According to Buddhism facts, they are based on the Five Precepts of Buddhism, which constitute the basic ethics of the belief system, and are designed to avert the monks from: killing living creatures, stealing, unchastity, incorrect speech, taking intoxicants, eating at inappropriate times, indulging in any forms of popular entertainment (singing, dancing, etc.), wearing decorative accessories (perfume, cosmetics, fashion accessories etc.), sitting on high chairs, sleeping on soft beds, and accepting money.

Buddhism Is Popular among Many Top Celebrities

One of the most interesting Buddhism facts reveals that the religion is nowadays considered very fashionable in Western societies, and many top celebrities are known to follow (or try to follow) its teachings. Kate Bosworth, Steven Seagal, Richard Gere, Tina Turner, Orlando Bloom, Tiger Woods, Steve Jobs, Naomi Watts, Jack Kerouac and Sharon Stone are just a few names on the very long list of American celebs who follow (or have followed) the path to Nirvana…

Buddhism is a 2,500-year-old religion and philosophy that originated in India, but has spread through most of Asia and – to a lesser degree – to other parts of the world. The fourth biggest religion in the world (by number of followers), Buddhism is split into different schools, of which Theravada and Mahayana are the most popular and wide-spread. The centre of Buddhism are the teachings of Siddhartha Gautama, which see Nirvana as the ultimate goal of existence. Nirvana is the stillness of mind, devoid of cravings and delusions, which ends the suffering otherwise present in all we do in life.