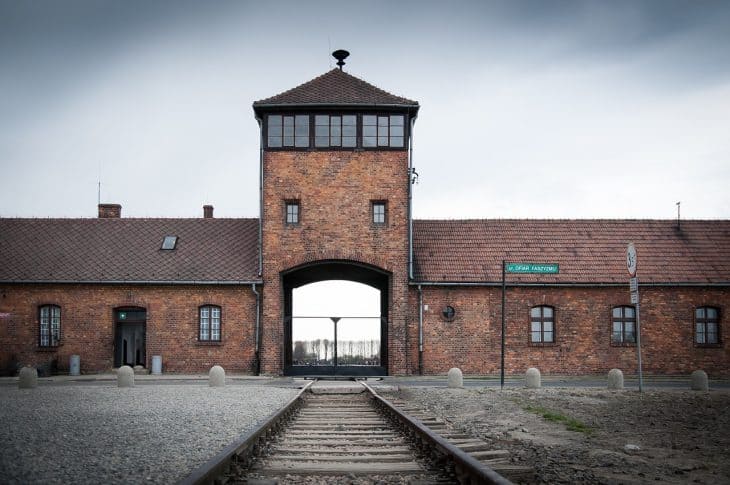 The Holocaust has marked history as one of the darkest eras of humanity. Long after the last Nazis left Auschwitz, the horrors suffered by its prisoners remain frozen in time. Until now, the Holocaust still plagues the lives of those who lost their loved ones for generations to come. It may not be the best story to tell, but it’s important to keep remembering the consequences of radical extremism and bigotry. This way, history may never repeat itself. Keep the memory of those who were lost alive with these Auschwitz facts.

Table of Contents
01 Auschwitz Facts Infographics
02 Among all German concentration camps, the Auschwitz extermination camp killed the most.
03 Auschwitz did not come from a single decision alone.
04 Above the gates of Auschwitz, a slogan reads “Arbeit Macht Frei.”
05 Auschwitz had 3 main funcitons.
06 Auschwitz stood amidst a railway junction with 44 parallel tracks.
07 The SS. of Auschwitz originally served as Adolf Hitler’s personal bodyguard unit.
08 A Polish soldier named Witold Pilecki volunteered to be imprisoned in Auschwitz.
09 SS. Chief Heinrich Himmler ordered the establishment of Auschwitz I.
10 Auschwitz II - Birkenau was established in October 1941.
11 Auschwitz III - Buna-Monowitz is the slave-labor camp.
12 The death camp and the slave-labor camp functioned hand-in-hand.
13 Auschwitz prisoners were registered laborers.
14 Polish shoemaker Tadeusz Wiejowski was the first to attempt to escape from Auschwitz.
15 There were approximately 170 female SS. at Auschwitz.
16 Camp doctor Josef Mengele selected thousands of prisoners for medical experiments.
17 People dubbed Mengele as the “Angel of Death.”
18 In October 1944, many Auschwitz prisoners rebelled after learning that soldiers will kill them.
19 Two successful escapees stole plans of the camp and met with resistance leaders in Slovakia.
20 Bombs fell upon the industrial complex adjacent to Auschwitz.
21 The Germans abandoned parts of the camps in 1945.
22 The Russians liberated Auschwitz in 1945.
23 In 1996, increased industrial activity in Oświęcim threatened the site.
24 In 1979, the Auschwitz Museum became a designated UNESCO World Heritage site.
25 “The Tattooist of Auschwitz” was the first book written from an Auschwitz prisoner's point of view.
26 The book “Survival in Auschwitz” told the story of an Italian-Jewish anti-fascist arrested in 1943.
27 The movie “The Guard of Auschwitz” recounted Holocaust through the eyes of an SS. soldier.
28 The Auschwitz camps also had brothels for prisoners called "puffs".
29 The Nazis also stole vast amounts of material goods from the Auschwitz prisoners.
30 Alongside the Jews, the Roma were the only other victim group gassed in family units.
31 More than 232,000 children under the age of 18 were deported to Auschwitz-Birkenau. 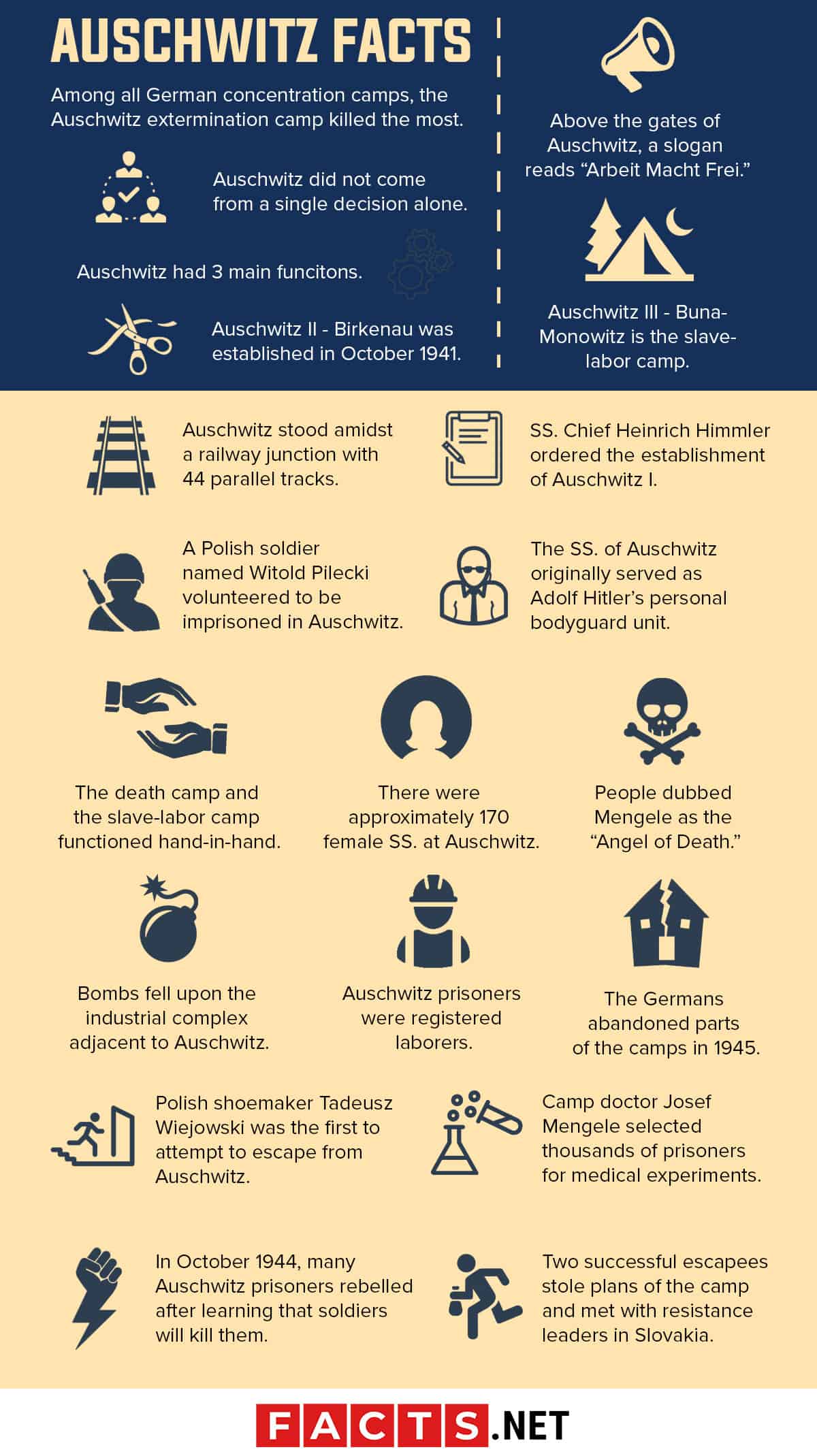 Among all German concentration camps, the Auschwitz extermination camp killed the most.

Throughout history, the Germans had six extermination camps. Auschwitz stood as the largest and deadliest of all. Under the orders of Nazi dictator Adolf Hitler, his soldiers tortured and murdered millions of people during World War II and the Holocaust.

Auschwitz did not come from a single decision alone.

Rather, Auschwitz resulted from “cumulative radicalization.” This refers to how one decision often leads to a crisis, which then leads to a more radical decision. The Germans initially established Auschwitz as a detention center for its political prisoners.

However, the political climate turned Auschwitz into an extermination site where Jewish people and other enemies of the Nazi state were enslaved, tortured, and executed in gas chambers.

Above the gates of Auschwitz, a slogan reads “Arbeit Macht Frei.”

From the German language, this translates into “Work makes you free.” On the contrary, anyone who passed through knew that it was the end of their freedom instead. This is only one of the Auschwitz facts that passed the test of time, with the original gate preserved to this day.

Auschwitz stood amidst a railway junction with 44 parallel tracks.

This strategic location may as well be the reason they chose this place to play a central role in Hitler’s “final solution.” These interconnected train lines served as the transportation system for sending Jews throughout Europe to their deaths.

Standing for “Schutzstaffel” or “Protection Squad,” SS. is more commonly known as the Nazi paramilitary corps. Later on, the SS. became both the Nazi Reich’s elite guard and Hitler’s executive force.

This team carried out security-related duties without any regard for legal restraint, and became one of the many faces behind the horrors of Auschwitz.

A Polish soldier named Witold Pilecki volunteered to be imprisoned in Auschwitz.

One of the unlikely Auschwitz facts is that someone had actually volunteered to be a prisoner in one of the camps. Serving as a cavalry officer for the Polish Army, Pilecki willingly got detained at Auschwitz in September 1940. Pilecki spent his time in Auschwitz gathering recon, eventually organizing and leading secret union for the camp’s prisoners. On April 1943, Pilecki successfully fled the camp during his night shift.

The same year, he released all the information he gathered as Witold’s Report, which provided the world’s first look of the atrocities that went on inside the Auschwitz camp.

SS. Chief Heinrich Himmler ordered the establishment of Auschwitz I.

Auschwitz I served as the primary prison camp and the first building block to Auschwitz in its entirety. Himmler’s project began on April 27th, 1940. The Germans used a former military base outside Oswiecim to establish Auschwitz, demolishing nearby factories and residential areas as well.

By June 14th, the first shipment of Polish political prisoners arrived. Today, Auschwitz I stands as a museum and memorial of the Holocaust victims.

Located by the village of Brzezinka, Auschwitz II was later developed as a huge concentration camp and extermination complex. It included about 300 prison barracks and 4 large bathhouses called Badeanstalten, where prisoners were gassed to death. The site also featured corpse cellars or Leichenkeller that stored bodies and cremating ovens or Einäscherungsöfen within the vicinity.

Established in May 1942, its location lies near the village of Dwory. This slave-labor camp supplied workers for the nearby chemical and synthetic-rubber factories of IG Farben.

The death camp and the slave-labor camp functioned hand-in-hand.

At the death camp, the newly-arrived prisoners were divided in a process known as “Selektion.” The Nazis separated the young and able-bodied to send them for labor in nearby factories. Meanwhile, younger children, their mothers, the old, and the decrepit were sent directly to the Auschwitz gas chambers. This is only one of the Auschwitz facts that show how inhumane it was at its core.

While the slave laborers’ entries became part of a meticulous record-keeping system, the opposite happened for those taken to the gas chambers. Unfortunately, prisoners deemed ineligible for labor had their records wiped out, leaving no documentation of their existence.

Polish shoemaker Tadeusz Wiejowski was the first to attempt to escape from Auschwitz.

Deported to the concentration camp in June 1940, Wiejowski endured Auschwitz for a month before his attempted flight in July 1940. One of the Auschwitz facts that show how extreme soldiers could get is Wiejowski’s capture and eventual death sentence in the Jasło prison camp in 1941.

There were approximately 170 female SS. at Auschwitz.

One of the infamous women of the SS. was Irma Grese. Known as the “Hyena of Auschwitz,” Grese was later convicted of crimes against humanity and executed on December 13th, 1945. At the time, Grese had only been 22 years old.

Read also: 47 Facts About 4th Of July You Must Know While Celebrating

Mengele was only one of the many Auschwitz doctors who tested vicious methods on Auschwitz prisoners. Among the barbaric procedures they performed is sterilization, the use of massive doses of radiation, and uterine injections. Definitely one of many Auschwitz facts that are hard to stomach.

People dubbed Mengele as the “Angel of Death.”

Among his notoriously cruel experiments was injecting dye into the eyes of inmates. Then, he would observe whether they would change colors and document any progress. As a result, inmates would become infected with horrible diseases.

In October 1944, many Auschwitz prisoners rebelled after learning that soldiers will kill them.

In 1944, the Auschwitz prisoners initiated their first rebellion with weapons smuggled in by Jewish women who worked in a nearby camp. Unfortunately, the Germans ended up crushing the revolt, killing almost everyone involved in the rebellion. As if that was not enough, the Jewish women were also publicly hanged.

Two successful escapees stole plans of the camp and met with resistance leaders in Slovakia.

Just before the deportation of Hungarian Jewry, two escapees managed to snag the camp’s confidential files. Resistance leaders were then able to compile a detailed report including the maps. In the summer of 1944, the report made its way to Western intelligence services. Eventually, numerous requests called for the bombing of Auschwitz.

Bombs fell upon the industrial complex adjacent to Auschwitz.

However, the death camp and crematoria itself remained untouched. These circumstances became subject to controversy over 50 years later.

The Germans abandoned parts of the camps in 1945.

Before deserting Auschwitz, the Nazis demolished most of Auschwitz III. However, Auschwitz I and Auschwitz II remained mostly intact.

The Russians liberated Auschwitz in 1945.

By the time the Russian government intervened and attempted to save the Auschwitz prisoners, only 7,000 prisoners remained in the camp. The Russians tried to help, but about half of the troops sent ended up dying from disease, exhaustion, and starvation.

In 1996, increased industrial activity in Oświęcim threatened the site.

Still, the Polish government joined hands with other organizations in a large-scale effort to guarantee its preservation.

Originally, Birkenau was known as Auschwitz Concentration Camp. However, the Polish government had the site renamed to “Auschwitz-Birkenau – The Nazi German Concentration and Extermination Camp (1940–1945)” in 2007.  To date, Auschwitz is the only death camp in the UNESCO World Heritage List.

“The Tattooist of Auschwitz” was the first book written from an Auschwitz prisoner's point of view.

Based on the true story of Lale and Gita Sokolov, the story centered on how the two prisoners met and fell in love in the Auschwitz-Birkenau. The fictionalized memoir did not only hold the #1 spot on Australia’s fictional titles list for nine months but also became a bestseller in the U.S. and the U.K.

The book “Survival in Auschwitz” told the story of an Italian-Jewish anti-fascist arrested in 1943.

Italian fascists deported Primo Levi from his native Turin to Auschwitz. In his book, he recounted the 10 months he spent in the German death camp.

The movie “The Guard of Auschwitz” recounted Holocaust through the eyes of an SS. soldier.

Released in 2018, this storyline featured the Auschwitz camp from a Nazi’s perspective. The book chronicled the life of the titular guard Hans, who was once an aspiring artist until the new-age propaganda for Germany sidetracked his ambitions. Starting as a Hitler Youth, Hans eventually became an SS. stationed at Auschwitz-Birkenau.

The Auschwitz camps also had brothels for prisoners called "puffs".

Created by the Nazis, these puffs offered sexual incentives to non-Jewish prisoners in exchange for their work. Female prisoners working in the brothel had to spend 15 minutes with each man, totaling up to 20 men per day. While this happens, a Nazi guard would be watching through a peephole. Definitely one of the Auschwitz facts that show the dark realities its prisoners had to face.

The Nazis also stole vast amounts of material goods from the Auschwitz prisoners.

Aside from jewelry, shoes, toothbrushes, and gold teeth, they even took artificial limbs and human hair.

Alongside the Jews, the Roma were the only other victim group gassed in family units.

In July 1944, the Auschwitz camp gassed around 19,000 Roma prisoners. Meanwhile, the Poles were the second-largest victim group held at Auschwitz. On average, around 83,000 Poles were either executed or died of illness in the camp.

More than 232,000 children under the age of 18 were deported to Auschwitz-Birkenau.

40 Important Canada Day Facts You Have To Know 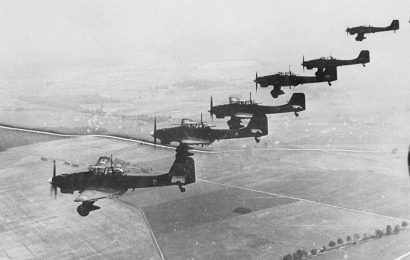 100 WW2 Facts About the Biggest and Bloodiest War in History 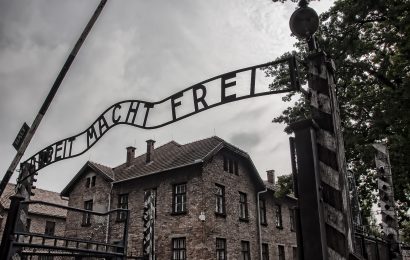 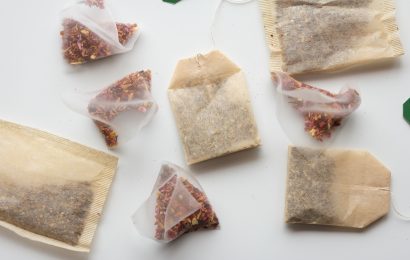 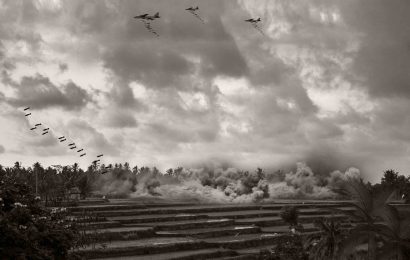 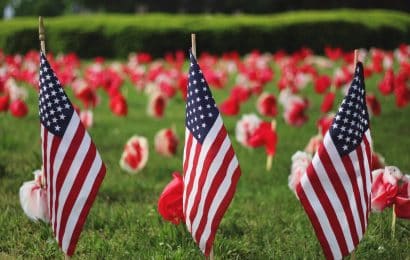 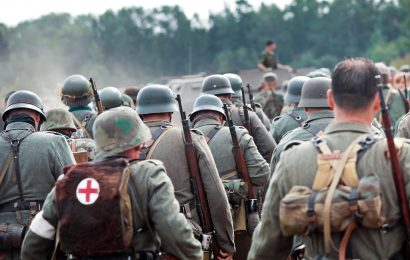 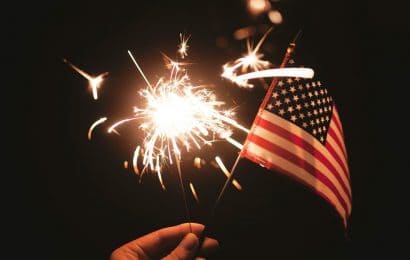 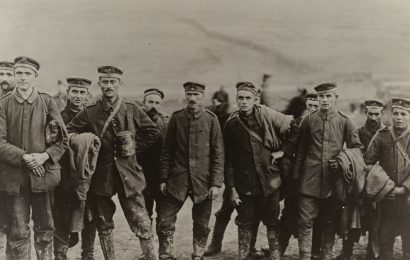 101 MindBlowing WW1 Facts You Must Know 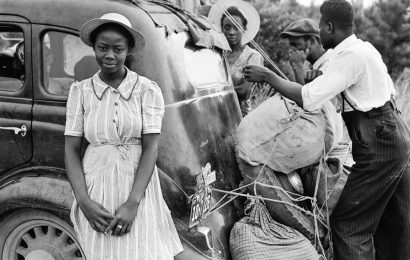 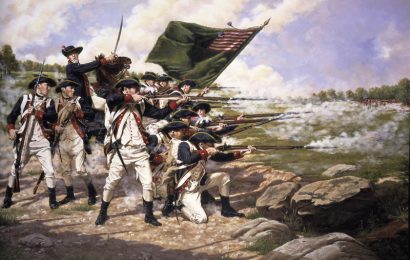 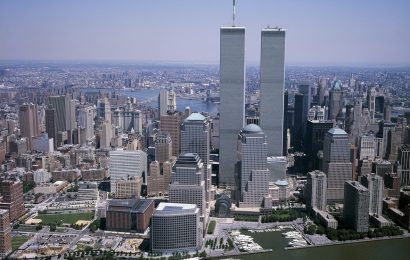 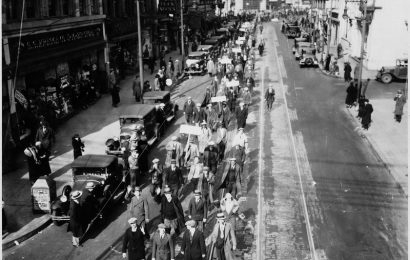