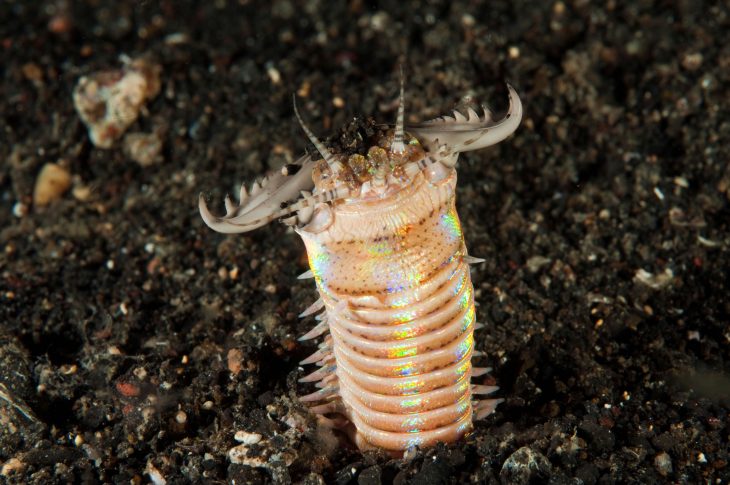 The bobbit worm is a fierce underwater predator. They have the ability to quickly strike out from the sand. Bobbit worms are blind, brainless, with spear-like teeth that can slice prey in half. Find out more about this strange creature with these 30 bobbit worm facts!

Quick Facts
Essential Facts
Interesting Facts
Table of Contents
01Bobbit worms are omnivores.
02Bobbit worms live in a wide range of habitats.
03Their bristles can cause permanent nerve damage to humans.
04The bobbit worm got its name from Lorena Bobbitt.
05Male and female bobbit worms do not mate.
06Bobbit worms hide their body on the ocean floor when hunting.
07Starship Troopers film features “Bugs” inspired by bobbit worms.
08Fossils reveal that the ancestry of the bobbit worms existed 400 million years ago.
09A bobbit worm was found in an artificial tank in 2009.
10A full-grown bobbit worm has no predators.

Bobbit worms mainly feed on other worms and small fish, as well as detritus or waste, seaweeds, and algae. Typically, bobbit worms are nocturnal and do most of their hunting during the night. In the day, they return to their burrows.

Bobbit worms live in a wide range of habitats.

Bobbit worms inhabit an environment that is rich in coral reefs, which allow their coloration to blend and their slim body to hunt in tight places. They also live in muddy and sandy areas, rocks, and sponges.

Their bristles can cause permanent nerve damage to humans.

The body of the bobbit worm has numerous bristles which may cause damage to human nerves upon contact. Its bristles gives painful stings. If one of the bristles gets through the human skin, one might experience or suffer from permanent nerve damage.

The bobbit worm got its name from Lorena Bobbitt.

The bobbit worm got its name from Lorena Bobbitt, a woman who cut the penis of her husband while he was sleeping. According to reports, Lorena Bobbitt threw the lacerated part in a nearby field. The incident occurred on June 23, 1993, in Manassas, Virginia. As Lorena Bobbitt stated in court, after she came home, her husband raped her. She used an 8-inch carving knife in lacerating his husband’s penis. After the trial, the jury declared Lorena not guilty and was not held liable for what she had done. She only underwent a 45-day evaluation period.

Male and female bobbit worms do not mate.

Bobbit worms, just like other polychaetes or marine worms, do not have sex organs. They do not mate or do sexual intercourse. Both males and females deposit sperm and eggs in the water. When the eggs and sperm meet, they start to propagate and develop.

Bobbit worms hide their body on the ocean floor when hunting.

When hunting, bobbit worms remain hidden on the ocean floor and wait patiently for their prey. They use their antenna to detect prey and mimic smaller worms. Once they sense their prey, they instantly get out of their burrows, grab their prey and drag it back to their den.

The 1997 American military film, “Starship Trooper” featured a species known as Arachnids, but commonly referred to as “Bugs” which is rather similar to the characteristics of bobbit worms. In the movie, the “Bugs” are terrorizing the world and are believed to have been provoked by human interruption to their habitats.

Fossils reveal that the ancestry of the bobbit worms existed 400 million years ago.

Bobbit worms have a long history. According to a source, some fossil remains in Ontario, Canada reveals that a similar worm-relative to the bobbit worm called Websteroprion armstrongi existed 400 million years ago.

A bobbit worm was found in an artificial tank in 2009.

Accidentally, a bobbit worm was introduced to an artificial environment. In March 2009, workers from the Blue Reef Aquarium in Cornwall found a bobbit worm in one of the tanks. They discovered that some of the fish in the tanks were either injured or had disappeared, while corals were destroyed.

A full-grown bobbit worm has no predators.

Generally, once a bobbit worm is full-grown, it does not have any predators. However, young bobbit worms may be eaten by a huge number of fish. Even humans who get a bite from bobbit worms could be fatal. Nonetheless, some people may catch them using a piece of equipment, making a skilled man its only known predator.