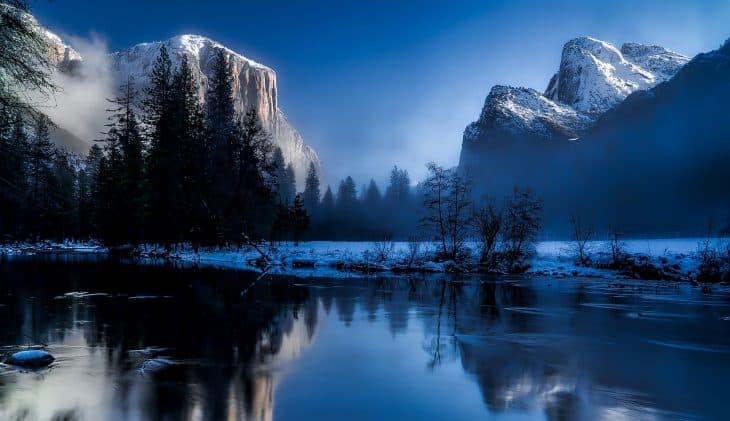 You probably know about Yellowstone from popular fiction. In particular, movies involving giant, world-ending, volcanic eruptions like 2012. But there’s more to Yellowstone than what popular fiction shows, from historical countryside architecture, hiking and camping opportunities, and even unique sights and living things. Read these 50 Yellowstone National Park Facts to find out about those and more. 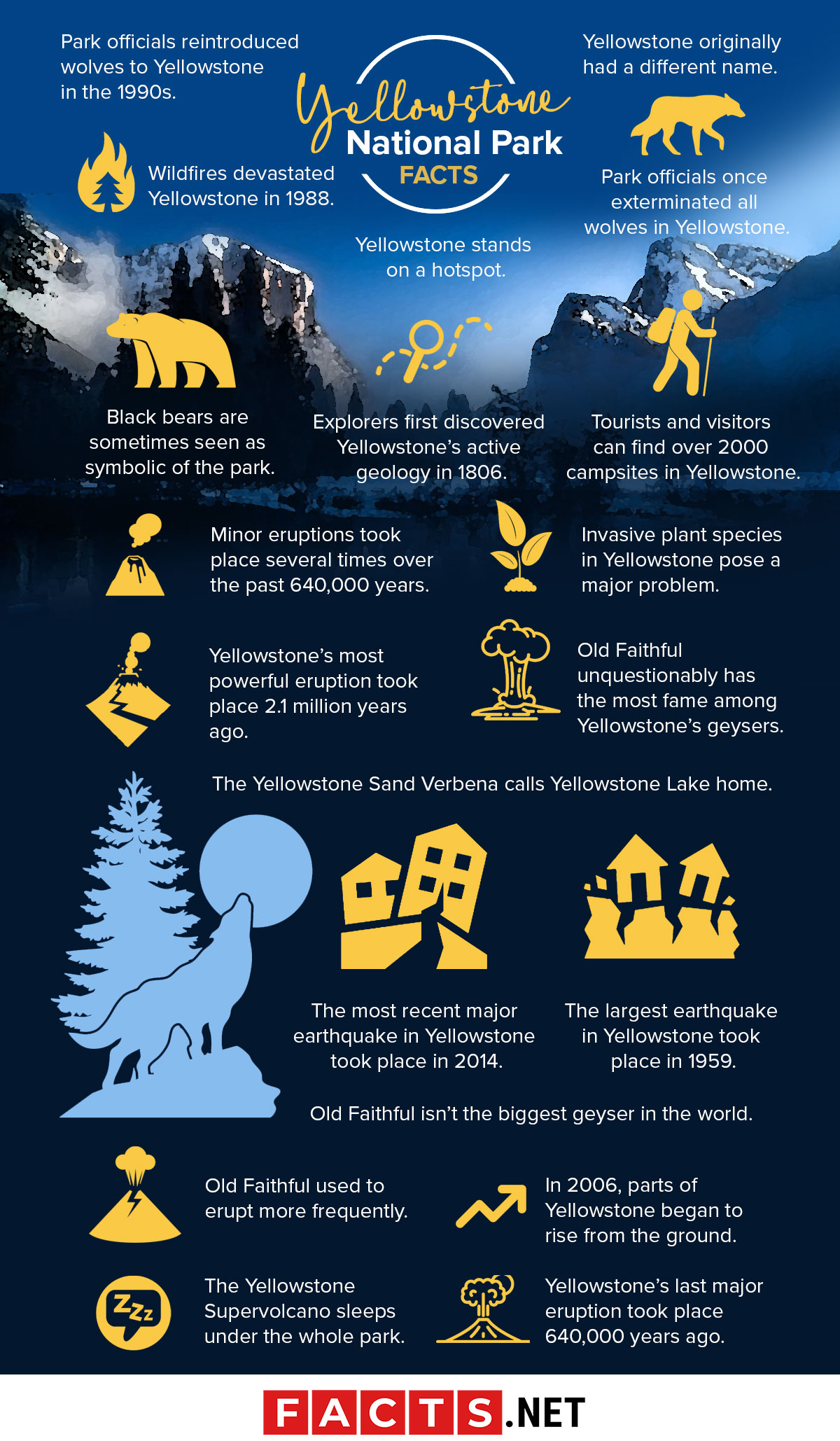 Yellowstone originally had a different name.

Here’s an interesting example of Yellowstone National Park Facts. The native Hidatsa people called the park’s main river Mi tsi a-da-zi, or Yellow Rock River. When French explorers first reached the area and learned the native name, they translated it to French as Roche Jaune. And from there, the Americans translated it to English in its modern form of Yellowstone.

Poaching was still a major problem in Yellowstone even after it became a national park.

Under the law, Yellowstone’s animal life enjoyed protections from hunting and trapping. But limited manpower and money meant that for most of the late-19th Century, it proved difficult to enforce the law in Yellowstone. That came to an end in 1886, when the US Army took over protection of the park. They built Camp Sheridan, later Fort Yellowstone, and other bases to protect the park. In 1900, the federal government also introduced stricter laws to punish poachers caught in the park. In 1916, the newly-formed National Park Service took over protecting the park, with the army completing the handover in 1918.

The Civilian Construction Corps (CCC) built most of Yellowstone’s facilities in the 1930s.

The CCC was a part of US President Franklin Delano Roosevelt’s New Deal, giving jobs to unemployed men. In Yellowstone, they built the older visitor centers still standing today and prepared camping grounds between 1933 and 1942. Not only that, they also built the system of roads around and across the park still in use today.

Park officials tried to introduce modern architecture starting in the 1950s, as part of a modernization program. They changed the policy again in the 1980s, after which they returned to the traditional log cabin style from before the 1950s. Talk about the good old days.

Tourists and visitors can find over 2000 campsites in Yellowstone.

Some of them even need to travel on foot or by horseback to reach. Hikers can also find an estimated 1,800 km of hiking trails for their enjoyment in the park. Surprisingly, though, mountain climbing is not recommended in Yellowstone, because of the unstable volcanic rock making up its peaks. Hunting is also not allowed in Yellowstone, as part of its protection as a national park.

Wildfires naturally occur in Yellowstone, but the 1988 wildfires proved especially powerful. They destroyed an estimated 3000 km² of land, covering an estimated 36% of the park’s total area. This led to a complete review and updating of the park’s fire management policies in the aftermath.

Yellowstone stands on a hotspot.

Magma rises from deep in the mantle in a hotspot, rising to the surface like a blowtorch burning through a metal plate. This causes periodic volcanic eruptions in the area where the hotspot reaches the surface. And even when volcanic eruptions don’t occur, other geological activity takes place. Thousands of earthquakes take place in Yellowstone every year, all of them too deep and weak to feel. Only sensitive scientific equipment can detect and measure them. The heat of the magma underground also powers the park’s many hot springs, geysers, and other geological wonders.

John Colter became separated from the Lewis and Clark Expedition in 1806 and entered a geothermal area in the northeast of the modern park. There, he discovered boiling mud, hot water streams, and trees petrified by the heat. However, his injuries in a battle with Indians led people to dismiss his reports as delusion from delirium. They even gave the place he discovered the mocking name of Colter’s Hell. Today, Colter’s Hell is an officially-recognized geologically-active area of Yellowstone National Park. Ironic, as it turned out, no matter how we look at it here at Yellowstone National Park facts.

The Yellowstone Supervolcano sleeps under the whole park.

It’s not just any supervolcano either, it’s the biggest in the world, with only Lake Toba in Indonesia coming close. Scientists estimate the magma chamber under the park to have dimensions of 60 km long, 29 km wide, and between 5 to 12 km deep. Naturally, they closely monitor the amount of magma in the chamber, just in case they need to warn of a possible volcanic eruption. Definitely a disturbing, but also a relieving example of Yellowstone National Park Facts.

Scientists say the force of the blast was 1000 times more powerful than Mt. Saint Helens’ 1980 eruption. It sent over 1000 km³ of volcanic matter into the air, where winds blew them up to thousands of kilometers across North America. It also created the caldera or crater that makes up the modern Yellowstone National Park. Scientists also think it may have caused several extinctions from the effects of so much volcanic matter entering the biosphere.

Minor eruptions took place several times over the past 640,000 years.

The most recent one took place 160,000 years ago. It didn’t come close to the power of what scientists call cataclysmic eruptions, only changing the local geography in a small way. Specifically, the West Thumb of Yellowstone Lake resulted from this recent minor eruption.

Geysers make up the most visibly active geological activity in Yellowstone today.

Thankfully so at that, considering the damage and death a supervolcano’s eruption would cause today. The heat of the magma underground causes water to boil and steam to build. Once it reaches a certain level, they erupt through the earth, sending a jet of steam and hot water into the air. An estimated 1,300 geysers exist in Yellowstone, of which 465 erupt every year. Scientists even estimate that accounts for half of the world’s geysers.

Old Faithful unquestionably has the most fame among Yellowstone’s geysers.

The name comes from its predictable and regular eruptions of steam and hot water. First discovered in 1870, it also became the first geyser in the park to receive a name. On average, the geyser erupts once every 90 minutes, to heights of up to 60 meters, and for as long as 5 minutes.

Old Faithful isn’t the biggest geyser in the world.

It’s just the most famous. Steamboat Geyser, also in Yellowstone, holds the title of the biggest geyser in the world. Its eruptions can go up to 120 meters in height, and for up to 40 minutes. The time between eruptions can also go up to years, though intervals of only a few days have happened in the past.

Yellowstone’s Grand Prismatic Spring is the biggest hot spring in the United States.

The largest earthquake in Yellowstone took place in 1959.

This was the Hebgen Lake Earthquake, striking with a magnitude of 7.2. It killed 28 people and caused $11 million in damage. Today, that’s equivalent to $96.48 million. It also caused several new geysers to erupt and turned many hot springs cloudy from releasing mineral deposits into the water underground.

The most recent major earthquake in Yellowstone took place in 2014.

It measured a magnitude of 4.8, striking near the center of the park at Norris Basin. No one died or suffered injuries from the earthquake. It also caused no reported damage.

In 2006, parts of Yellowstone began to rise from the ground.

Specifically, Mallard Lake Dome and Sour Creek Dome began to swell, growing in height by over an inch. This caused a surge of media speculation, in particular, that of a volcanic origin. Scientists quickly clarified that the swelling ground wasn’t caused by a magma buildup, but by changes in the underground geography. The ground finally stabilized in 2007. Thankfully it was just a false alarm!

Yellowstone Lake is the biggest high-altitude lake in North America.

It covers an area of 350 km², at a height of 2.36 km above sea level. At its deepest point, the lake goes down to a depth of 120 meters, though on average it only averages a depth of 42 meters. In winter, the lake’s surface freezes over, sometimes up to a thickness of 1 meter. Freezing usually takes place in late December and can stay frozen for as late as June.

Figuratively-speaking, of course. It also calls the rest of the park home, as you can’t find the flower anywhere else in the world. All estimated 8000 known examples of the flower grow on the shores of Yellowstone Lake, high above the waterline.

These include flies and arthropods, all of whom eat the bacteria for food. The bacteria themselves eat the minerals the hot water carries from underground for food. Scientists once thought the bacteria only ate sulfur, but now they know they’re wrong. The bacteria actually eat all kinds of minerals, and to the scientists’ surprise, even plain hydrogen.

Scientists think the bacteria in Yellowstone could have many applications in science.

As the old saying goes, big things come in small packages, as we see it here at Yellowstone National Park Facts. 1 of them, Thermus aquaticus, produces special chemicals useful in Polymerase Chain Reaction (PCR) testing. Other bacteria have shown promise in providing cures to various diseases, or even to clean water of toxic waste. Scientists also say that between the bacteria’s ability to grow quickly, as well as the trillions of bacteria living in each hot spring, they can harvest the bacteria with no impact on the environment. They only need a small sample to start with, and then grow them in a laboratory afterward.

Most importantly, they compete with native species for nutrition in the soil. They could also outcompete the native plant life, and possibly drive them into extinction. For these reasons, park officials regularly scout the park for any invasive plants. They then uproot any of those that they find to protect the park’s native plant life.

These include the Rocky Mountain Wolf, the Canadian Lynx, coyotes, and both black and grizzly bears. Bison, commonly called buffalos, also call Yellowstone home. You can also find elk, moose, several kinds of deer, and even mountain goats and wild sheep in the park.

Yellowstone’s bison herd is the biggest in the USA.

They’re also wild, freely roaming the park and protected from exploitation. This causes concern to nearby ranchers, over the diseases carried by the wild bison. Those diseases could spread to domesticated bison, who don’t have the resistance of their wild cousins. This has led to the controversial policy of shooting any wild bison that leaves the park.

Park officials once exterminated all wolves in Yellowstone.

This started in 1914 when the US Congress declared wolves a danger to other animals living on public lands. By 1935, park officials had wiped out the wolf population in Yellowstone. This had the side-effect of leaving the smaller coyote the main predator in the park. Coyotes couldn’t bring down bigger prey, causing the population of elk and bison and other big mammals to grow beyond the natural average.

Park officials reintroduced wolves to Yellowstone in the 1990s.

They imported wolves from Canada and settled them in the park in 1995. By 2008, the wolf population in the park had recovered, and the natural balance between animals began to recover.

Black bears are sometimes seen as symbolic of the park.

This comes from how many of them live in the park, especially in the north. Park officials once allowed tourists and visitors to feed bears but stopped allowing them in the 1960s. This resulted after park officials realized that the bears had started becoming dependent on humans for food.